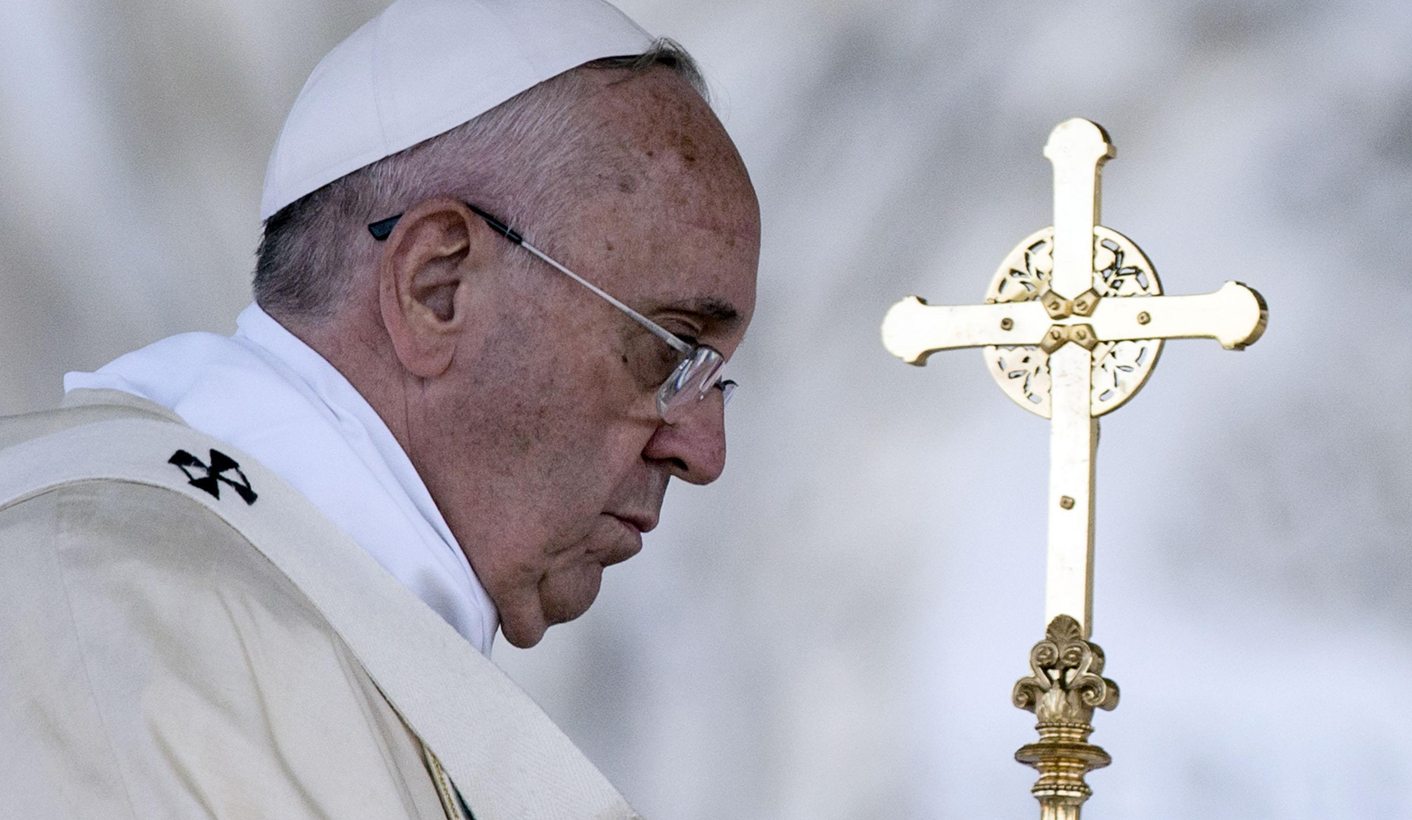 A much speculated on and debated encyclical on ecology is due to be released by Pope Francis later this week. The encyclical has caused a storm before its publication. Some politicians, most notably in the US, have advised the Pope to keep quiet about climate change and global warming. Yet, American Rabbi, Arthur Waskow, has been inspired by the Pope to write a letter to “all Jewish people, to all communities of the spirit, and to the world” on the climate crisis. The Dalai Lama tweeted to 11.2 million people “Since climate change and the global economy now affect us all, we have to develop a sense of the oneness of humanity.” And, to add to the pot, a veteran Vatican journalist, Sandro Magister, has had his press accreditation withdrawn from the Vatican for breaking an embargo on the release. By RUSSELL POLLITT.

Pope Francis is likely to take a hard-line in Laudato Si (meaning ‘Praise Be!’) Its title is a quotation from a prayer by St. Francis of Assisi whose name Pope Francis chose to be known by. The phrase ‘Laudato Si’ is used a number of times in St. Francis’ ‘Canticle of the Sun’, a prayer that praises God first for creation and addresses ‘Brother Son’ and ‘Sister Moon’. The Canticle was written around the year 1224. The prayer is recognised as one of the first published works in the Umbrian dialect, which was the then-developing Italian language as opposed to Latin.

The Pontiff will, no doubt, be very critical of the role that greed and capital play in the degradation of the natural environment. He is also expected to say something on how climate change is affecting the poor and most vulnerable. Francis already caused a stir when, in his first apostolic exhortation, Evangelii Gaudium, he spoke of an economy that exploits and excludes. He noted that greed was at the centre of the way the economy has developed and operates and that people are used as a means to an end. He called for an economy that put the human person back in the centre.

Cardinal Oscar Rodriguez, who is close to the Argentine Pope and heads up his council of nine cardinal advises, said in Rome last month that the ideology around the environment is too tied up with capitalism and that capitalists will not want to give up their profits. He also said that movements in the US would be hostile to the Pope’s environmental stance. He called the US and China “the most environmentally damaging countries”. On a visit to Spain, a few days ago, Rodriguez reportedly laughed at those who attacked the document even before its release saying that it will be “a great shock” that will make everyone think.

Rodriguez may not be far wrong. Former US senator and Republican, Rick Santorum, who called the theory of global warming a “hoax” and “junk science”, has already advised the Pope to “leave science with the scientists” and focus on theology and morality. Santorum suggested that the Pontiff had no competence to make pronouncements on things like climate change. A huge debate followed on social media about whether or not the Pope had a master’s degree in chemistry. This was later debunked; the Pope studied chemistry as a student but never obtained a masters in the subject. It is true however, that he worked as a chemist before studying for the priesthood.

Another climate change sceptic, US Senator James Inhofe, told a like-minded gathering last week, “The Pope ought to stay with his job, and we’ll stay with ours”. “I’m not going to talk about the Pope,” he said, “let him run his shop and we’ll run ours.”

The storm around this encyclical is, in some ways, understandable not least because climate change and global warming are hot-button issues in the current political arena – not unlike migration. Francis has himself said that he wants it to have “real-world policy implications”. The Vatican announced a few months ago that it was the Pope’s intention to have the document published before a UN sponsored agreement on Sustainable Development Goals and a UN summit on climate change that take place later this year in Paris. A source in the Vatican, wanting to remain anonymous, said that Francis is seeking “a more integral ecology that’s all-inclusive and comprehensive”. The source said that the idea behind the document is to call everyone to action; nobody is excluded. “No one should be able to say: I have a clean conscience because its not addressed to me.”

While the debate and speculation about its contents continue, another storm hit Rome. Italian magazine I’Espresso posted a leaked copy of the document on Monday. (This was after two big news breaks on the same day: the resignation of the archbishop and his assistant bishop of the Archdiocese of St. Paul’s and Minneapolis in the US – 10 days after they were served with a criminal complaint regarding failing to deal with sex abuse. The other was the announcement that a defrocked former papal ambassador will be going on trial over abuse allegations.)

The Vatican called this leak “heinous” and suspended the press credentials of veteran Vatican journalist Sandro Magister. Magister claims that he only wrote the introduction and it was his editor who obtained the text and decided to publish it. Magister is, however, considered by many to be a conservative that does not approve of Pope Francis. Sources inside the Vatican told Daily Maverick that they believe this was a direct attempt to discredit Francis by his opponents. “Some people in Rome do not like the Pope, this is a fact. They will do what they can to be obstacles to renewal and discredit him and his vision.” The head of the German-speaking section of Vatican Radio called it “sabotage”. Many press outlets tried to figure out what their ethical obligations were after the leak was published. Some stated publicly that they would respect the embargo. (So for those who like to claim the media have no ethics this proves that this is not always true!)

Spokesman for the Pope, Fr Federico Lombardi, immediately issued a statement saying that the text which was leaked is not the final draft and that the embargo still remains in place. “You are invited to respect the journalistic honesty that requests you wait for the official publication of the final text,” he said. Publication is set for midday on Thursday.

But, despite this, many have already read and circulated the available text. Kumi Naidoo, international executive director of Greenpeace, tweeted: “BREAKING: Pope Francis warns of destruction of world’s ecosystem in leaked encyclical.” Cruxnow.com published parts of the text saying it “features strong language on global warming and climate change”.

The leaked draft, divided into six chapters, calls climate change “one of the principal challenges now facing humanity”. The leaked version places distance between the Church and those who think the planet is overpopulated. The draft says that answers to the environmental crisis do not lie in reducing human presence on earth – an apparent shot at population control advocates. It also rejects the notion that technological solutions alone will solve environmental challenges, and that human beings and their activity are the only problem.

On Thursday we will know if the leak was accurate and if there were actually any substantial changes between what we have and what is to come. More people are expected to read the document now, perhaps, to see just how accurate the leak was.

Francis is certainly giving Catholicism new direction. For many years the Catholic Church has had the tendency to be exclusively fixed on personal moral issues. Pope Francis is adjusting the focus and fixing the Church on the path of social justice and social morality. Francis may also gain a few allies from groups who have been fighting the environmental battle for years. It will be fascinating to see what he says and what the reaction will be.

The fact is, like him or not, this Pontiff seems intent on getting the world talking – and no doubt he will, again. DM

Photo: Pope Francis celebrates a mass at the St. John at the Lateran Basilica to mark the Corpus Domini, the feast of the Body and Blood of Christ, in Rome, 04 June 2015. EPA/ANGELO CARCONI