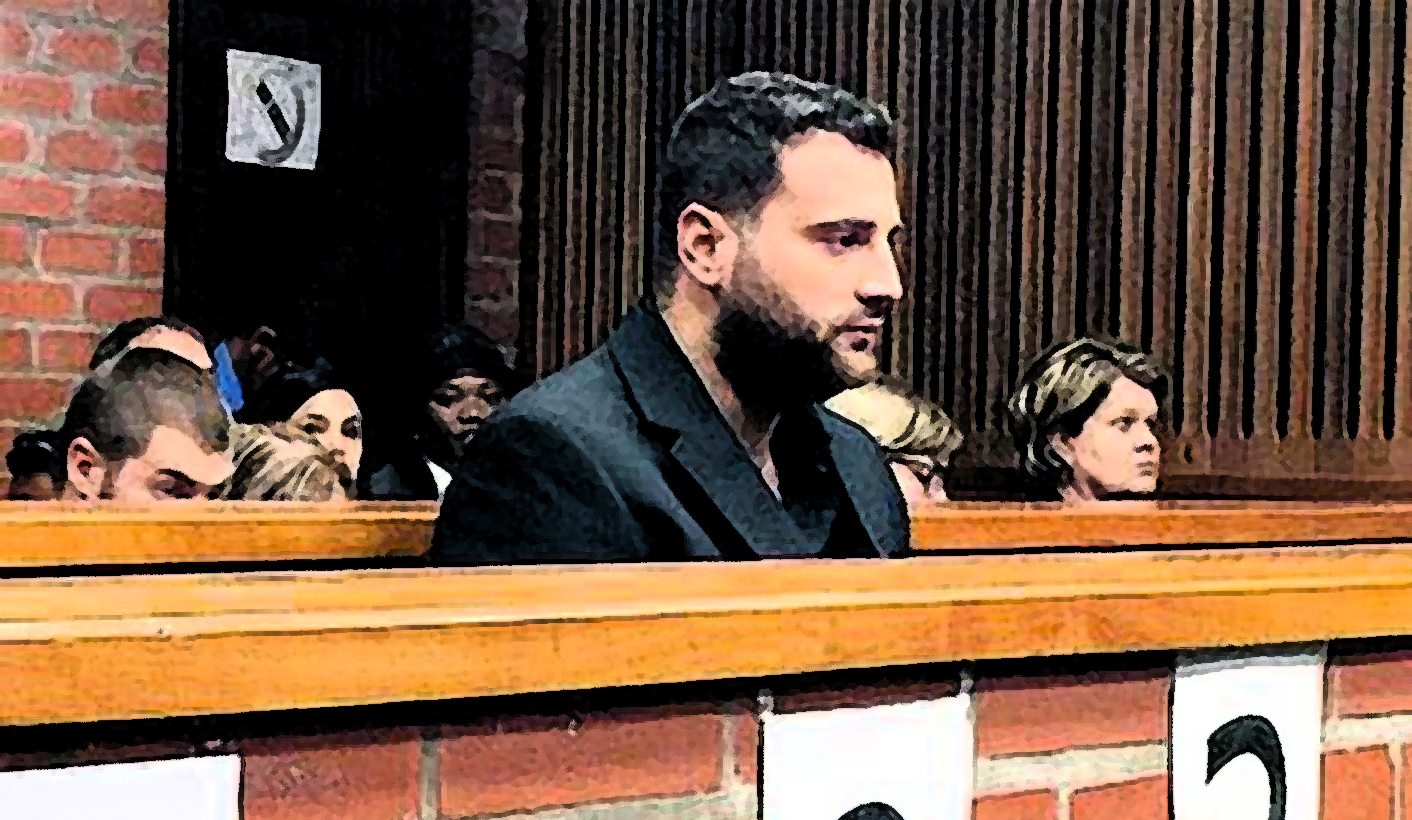 The case of Christopher Panayiotou, the Port Elizabeth man accused of planning the murder of his wife, looks set to become one of the most sensational court cases of the year. Media attention, particularly in the mainstream English and Afrikaans press, has already been feverish. But the Panayiotou case is not the only shocking femicide to have occurred over the past months. For the umpteenth time, it’s worth asking why some South African crimes are considered more deserving of attention than others. By REBECCA DAVIS.

Christopher Panayiotou is the new Oscar Pistorius; the new Shrien Dewani. He seems to actively invite these comparisons: in Panayiotou’s bail application, one of the arguments marshalled to defend why he should be given bail was that both Pistorius and Dewani had been granted it.

Those who are unfamiliar with his name must have been consciously avoiding mainstream media over the past weeks – including the international press. His wife, schoolteacher Jayde Panayiotou, was found murdered on April 22nd, her body discarded outside KwaNobuhle township in Uitenhage.

The immediate assumption was that this was another illustration of the random and terrible crime epidemic plaguing South Africa. While waiting for a friend to collect her for work, the narrative went, she had been picked up by criminals cruising for money. A CCTV still of a suspect believed to have withdrawn money from an ATM using Jayde’s bankcard was briskly circulated on social media. Thousands of PE residents marched with candles to demand “Justice for Jayde”, with many calling for the reintroduction of the death penalty.

In retrospect, the instant presumption that those responsible for Jayde’s death were black strangers should have been highly questionable. The mere fact of her abduction while waiting for a lift to school seemed odd: why her? Why there, on an unremarkable suburban PE street?

The tributes to the murdered schoolteacher flowed in. None was more effusive than the eulogy delivered by her husband at her funeral. “Jayde resides in the wind like an elemental force. She can be experienced in the blooming of flowers; she is the yellow in daffodils of her favourite flower,” he said. “She is the crest in every breaking wave, she is the fertile soil; she is the enduring embers of the fire.”

We now know that the suspicion of police fell almost immediately on to Christopher Panayiotou. It was reported that among the mourners at Jayde’s funeral were undercover cops. Thando Siyoli, a bouncer at Panayiotou’s bar, seems to have caved rapidly in the face of police pressure and agreed to cooperate with the authorities at the expense of his boss. He met Panayiotou and demanded more money for the killing of Jayde: a discussion secretly recorded by police.

The transcript of that conversation is deeply damning. It suggests that Panayiotou’s lawyers are going to have their work cut out for them in trying to keep their client out of jail. In it, Panayiotou appears to rebuke Siyoli for the way in which the hit on his wife was carried out: “It became a kidnapping and a murder instead of just making it a robbery outside the house,” he says. Later: “I’ll sort out your family, you hide low OK. You need to be gone for a few months till this thing calms down.”

Jayde Panayiotou’s murder was always likely to attract attention. An attractive young white woman – a schoolteacher, nogal – senselessly killed after being dragged into a car outside her own front door: it’s the type of crime that plays on suburban South Africa’s deepest fears. It was when journalists got wind of the fact that Christopher Panayiotou was to be arrested, however, that the media frenzy really kicked into gear.

In the hurry to be first with the sensational plot-twist, a number of media outlets contravened the regulation which usually holds that suspects in criminal cases should not be named until they are formally charged. Some days before Christopher Panayiotou turned himself in to police, it was well known that it was he who was the “suspect close to the family” suspected of involvement.

Since then, a series of scurrilous revelations have fuelled public fascination with the case. Sharp-eyed journalists spotted that Panayiotou’s overblown eulogy was plagiarised in large part from a blog. It was said to be an open secret that Panayiotou was carrying out an affair with an employee – something since apparently confirmed. The motive for the murder is said to be the financial burden Panayiotou experienced in attempting to meet the needs of a wife and a mistress.

The public’s sympathies were always unlikely to be on Panayiotou’s side, but beyond what looks to be a significant case against him, he was done no favours by the phrasing of his bail application. In a line so wrongheaded that it practically beggars belief, Panayiotou argued that a reason why he should be granted bail was that “each and every day in this country very serious murders, much more serious than this one” are committed.

Aided by missteps like this one, Panayiotou has transformed rapidly from bereaved husband to a figure of cartoonish evil in the public’s eyes: a selfish, greedy cad who allegedly plotted to have his wife killed several times before the plan was successfully executed. When his court case begins in earnest, it’s virtually guaranteed that the media attention will be unrelenting.

What is it about the Panayiotou case that invites that scrutiny? Partly, it is because both victim and alleged mastermind are middle-class and white, in a country where middle-class white bodies are routinely granted more reverence and dignity in death; and where white criminality is held to be extra fascinating because it is considered so much less likely than black criminality.

It is also probably because there is a special type of intrigue around the idea of contract killings. An ancient form of crime, yet also one of the manifestations of the insanity of late capitalism. In a country where so much of the dirty work is outsourced by wealthy South Africans to blacks, why not murder too?

Then there’s the fact that the Panayiotou case comes so hot on the heels after that of Shrien Dewani, the British businessman accused of having hired hitmen to murder his Swedish bride Anni in Cape Town in 2008. To the consternation and disbelief of many South Africans, Dewani was acquitted. Is there a sense in which the Panayiotou case offers the catharsis of a do-over? A friend suggested: “It’s like we get to do Dewani again. But properly.”

While the facts of the Panayiotou case may legitimately prompt outrage and public interest, other recent cases won’t raise anywhere near the same fascination.

The bail hearing of Polokwane businessman Rameez Patel, accused of beating, shooting and killing his wife Fatima, will be dwarfed in attention this week by the ongoing court proceedings involving Panayiotou. While the Sunday Times did run a piece specifically comparing Patel and Panayiotou, it is fair to say that Patel’s case has attracted only a fraction of the column inches granted to the Panyiotou case.

Yet Rameez and Fatima Patel were a wealthy and glamorous couple, and as such more people will learn of Fatima’s murder than will hear about countless other unknown, unnamed victims.

Last Sunday, meanwhile, the Sunday Times led with a huge front-page splash about the murder of a woman identified as comedian Trevor Noah’s cousin. Cebisile Happiness Khoza was found dumped in a field near Greytown in KwaZulu Natal, her body burned and stabbed repeatedly.

It has subsequently emerged that the newspaper was incorrect to identify her as Noah’s cousin, and that Khoza was no relative of the comedian. A fairly long article giving this clarification made absolutely no mention of who Khoza actually was, dealing only with the reactions of the Noah family. There is an unsettling sense of ‘false alarm; move along’. Noah’s cousin wasn’t killed – therefore, nobody needs trouble themselves about this murder any further. Khoza made the front page purely by virtue of her relationship to a famous man.

What point is to be made by drawing these stories together? Firstly, that we should constantly be interrogating the media economics that so blatantly values the lives of those who are rich, white, or famous more highly – and, it should be stressed, the public appetites which fuel the production of that reporting. Secondly, it hammers home the sobering truth, yet again, that in South Africa, violence against women knows no particular colour or class.

RIP Jayde, Fatima, and Cebisile. May those responsible for your deaths face justice swiftly. DM