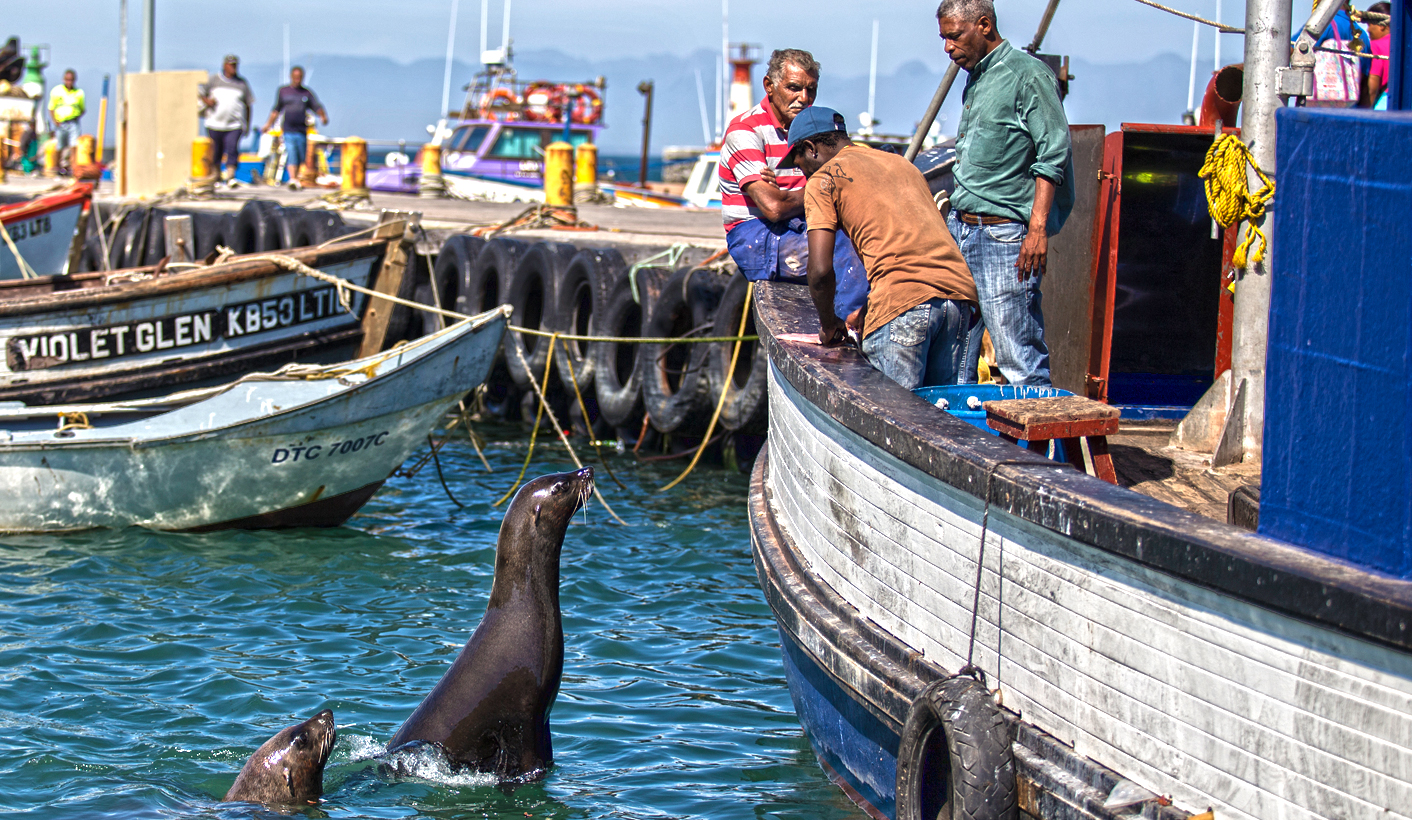 The Cape of Good Hope SPCA van is becoming a regular fixture at the Kalk Bay Harbour, as the number of seals with bait box bands around their necks increases. But rescuing seals from potentially fatal strangulation by the bands is no simple feat. Words and photographs by JENNIFER BRUCE.

The seal’s eyes dart between the two men standing in front of her: a fisherman clapping his hands and whistling, and a Cape of Good Hope SPCA Wildlife Unit Inspector with a long hooked pole aimed at her.

Her eyes settle on the ‘fish’: a balled up piece of wet newspaper on the ground. This soggy lump enticed her out of the water and onto the tyre attached to the harbour wall.

She turns to look at the clapping fisherman and the SPCA Inspector lunges, reaching out the pole to hook it under the plastic box band around her neck.

She’s too quick for him. Before the hook is secured under the band she dives back into the water at Kalk Bay Harbour in Cape Town, South Africa.

The Cape of Good Hope SPCA van is becoming a regular fixture at the small boat fishing harbour as the number of seals with box bands around their necks increases. The plastic bands are used to secure bait boxes mostly consumed by crayfish fishermen.

Shaun Giles, an Inspector with the Cape of Good Hope SPCA Wildlife Unit, explains the grim truth behind these seemingly harmless strips of plastic: “The box bands don’t need to be cut to remove them from the box, they just slide off and end up in the sea where the seals swim into them. If they’re not removed the band becomes embedded in the seals’ skin, resulting in a slow strangulation and death. The band on this seal hasn’t been there for very long,” he says, referring to the seal that is now watching him from the water. The white band is easy to see against her glossy dark coat.

Shaun points to a large seal swimming below the harbour walkway. “It’s the bigger male that we need to get. We’ve been trying to catch him for two and a half months now.” As the seal moves a thick raw line where the box band has cut through his skin is visible around his neck. “The band is embedded in his skin. We’re not going to get it out with the hook pole, it’s too deep, we need a special net, and we need to get him on land,” Giles says.

Giles leans against a metal pillar holding up the roof over the Harbour’s fish gutting area, waiting for his next opportunity to catch the seal.

He watches the female seal swimming in circles close to the harbour wall. She dives below the water line and launches herself up on to the tyre. Giles doesn’t hesitate. He lunges forward, securing the hook in-between the box band and the seal’s neck. The blade at the bend of the hook slices the band as the seal dives backwards into the water. Beside her float two white bands, no longer in a perfect circle. Giles grins.

The sky over Kalk Bay Harbour darkens. Most of the fishermen and tourists have left. Giles successfully helped the female seal, but the male he’s been trying to help for over two months is going to have to wait.

During the first half of the year, Kalk Bay Harbour on Cape Town’s southern peninsula is home to commercial Rock Lobster or crayfish fishing boats, which they use as a base to drop and collect their crayfish traps along the coast line. Discarded box bands from their bait packaging end up in the sea and around seals’ necks.

The relationship between fisherman and seal is generally not a good one. Seals are blamed for fishermen losing fish whilst at sea, as human and animal compete for the same resource. Local fishermen describe the seal’s actions as “stealing” the fish they are trying to catch to earn a living.

Third generation Kalk Bay fisherman Cassiem Elmazon, who started fishing when he was fourteen, describes the relationship between seal and fisherman: “They make you very cross. Especially when you’re catching snoek, they just take the snoek off your line. It’s R70 ($7) for a snoek, and they just take it. Some fishermen kill them, they shoot them with a gun.” Cassiem looks down and shakes his head.

“Seals and fishermen are just not friends.” explains Anel Nortier, Chief Marine Conservation Inspector from the Department of Agriculture, Forestry and Fisheries based at Kalk Bay Harbour. “Often the seals don’t even eat the whole fish. They just bite into it, play with it and then move on to the next one.” Under South African legislation, seals are protected animals, but Nortier says that trying to convince a fisherman to cut the box bands or buy bait in bags to save a seal is difficult. “Most fishermen don’t have any pity for an injured seal. During coastal patrols we’ve seen dead seals washed up on the beach with bullet holes,” says Nortier.

The seals in and around the harbour are residents. They are fed by tourists and the fish cleaners who discard the leftovers into the sea in and around the harbour. “They shouldn’t be here, they should be living on Seal Island,” says Nortier, referring to the small island off the False Bay coastline, a well-known hunting ground and viewing site for Great White sharks. The seals have become habituated; they sleep on the harbour walkways and are fed daily. “It’s easy living for the seals, but for their own good they shouldn’t live here,” says Nortier.

Harbour life feeds a tragic circle between tourists and harbour workers feeding the seals enabling them to live at the harbour, and fishermen viewing seals as competition for their livelihood, unconcerned that the strips of plastic from their bait boxes sliding into the water become a death trap for seals.

The only way to help a seal with an embedded box band is to capture them on land with a specialised net.

The net costs around R7,000, and while the SPCA has a smaller net suitable for a female seal they don’t have the funds to buy the larger bull net needed for this particular seal and many others like him.

The Cape of Good Hope SPCA Wildlife Unit has been operating since 2007. The unit’s three inspectors: Shaun Giles, Gareth Petterson and Megan Reid are responsible for an area covering 13,000km².

Wanika Davids, spokesperson for the Cape of Good Hope SPCA Wildlife Unit says, “The SPCA is a non-profit organisation. We don’t receive any government funding, we rely solely on outside support: donations from the public and fundraising. Sometimes the equipment we need just isn’t affordable for us.”

Undeterred by the budget issues facing the unit, Giles and his colleagues arrange for Steven McCue from the South African Department of Environmental Affairs Oceans and Coast, who has a bull seal capture net, to be on standby with them for the call from Harbour officials to say that the seal with the embedded box band is on land.

“Now we wait. This rescue is further complicated because there’s a bigger male here who is very territorial and chases him around, so he doesn’t sleep on the harbour with the other seals, otherwise we could just come early in the morning while they’re sleeping and trap him. Now we have to wait until someone sees him on land and then get here before he goes back into the water. It’s all about luck,” says Giles.

A week and a half later the call comes through: the injured seal is on the rocks in front of the Harbour House restaurant. Travelling from opposite ends of Cape Town, Giles and McCue meet at Kalk Bay Harbour. The seal is sleeping in the sun on a large rock with his back to the sea. Giles, together with Petterson and McCue carrying the bull seal capture net, quietly approach the sleeping seal. Giles hangs back a few meters. McCue is now inches from the bull, with Petterson a few feet behind him. McCue steadies his feet on the slippery rocks, and flings the wide opening of the net over the seal’s head. Startled, the seal leaps up to escape, wedging himself further and further into the nose of the net, precisely where the team want him.

McCue struggles to control the netted seal as he jumps from rock to rock. Petterson rushes forward to assist. Giles, carrying a thick metal pole, is not far behind them. He hands one end of the pole to Petterson. They kneel, using the pole and their combined weight to hold down the writhing seal. A woman watching from the restaurant window above clutches her chest as the drama unfolds.

McCue lies down on the seal’s back, loosens the lacing in the canvas, and starts cutting away at the band with a knife. “Wow, that’s quite embedded,” remarks Petterson. There are a few seconds of relative calm until the seal attempts to lift his head and shoulders. The three men, with a combined weight of around 250kg, struggle to hold down the 90kg seal. “All their strength comes from their shoulders; they’re really strong,” Petterson comments, as he grimaces and leans down on the pole.

Calm restored, McCue switches tools and unfolds a Leatherman, using the pliers to finish the job.

“Now we’ve got to get this guy out of the net,” says McCue. He loosens the lacing and climbs off the seal’s back. Petterson and Giles keep their weight on the pole across the seal’s shoulders as McCue prepares to manoeuvre the net towards the seal’s head. Pettersen gives a thumbs-up and the two inspectors lift the pole and quickly move out of the way, while McCue simultaneously moves the net in the opposite direction. The seal backs out of the net, wriggling himself free as the white box band falls onto the ground.

The stunned seal sits still on the rocks; he looks at Giles for a few seconds, turns and moves towards the water’s edge, slowly backing himself into the sea.

A small crowd has gathered on the harbour wall. A woman looking down into the sea smiles as the liberated seal swims past.

McCue, Petterson and Giles watch him disappear beneath the waves. As they turn to leave McCue chuckles and says: “I think we deserve a beer.” DM