Op-Ed: Xenophobia, the darkest déjà vu 0f them all 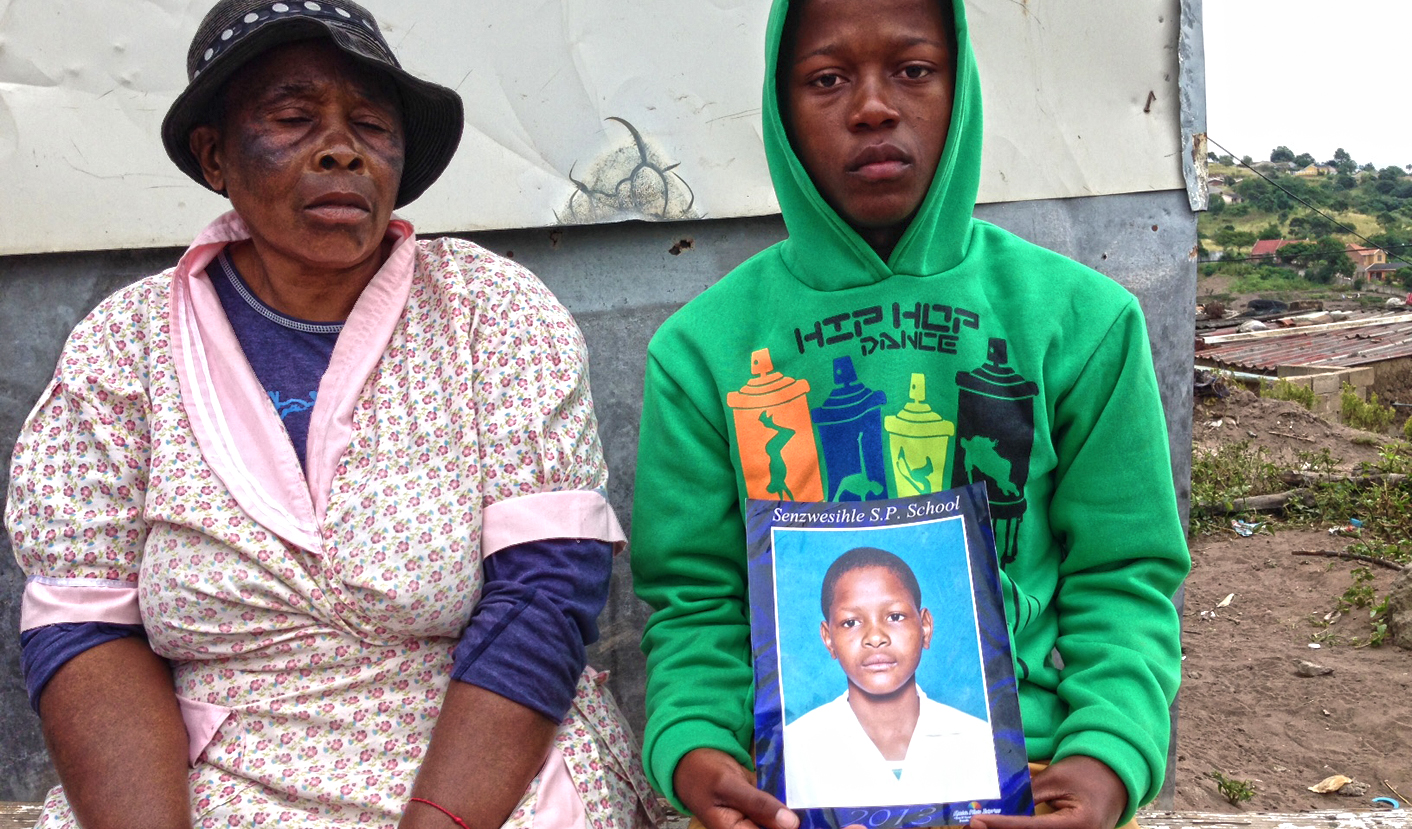 Seven years ago when xenophobia sparked violent attacks across South Africa, ALEX ELISEEV reported on the story in Johannesburg. Seven years on and it is happening again. This time he returns from the war zone in Durban, having seen this painful movie before.

The man in the car next to me looks anxious, signalling for me to roll down my window. It’s after five o’clock; he’s probably heading home, sharing a ride with a colleague dressed in a matching jersey. They’ve sped around my car to catch my attention.

I’m not lost but the roads of Durban’s inner city are unfamiliar. I’m searching for my colleague who has spent the day here, reporting on a wild battle between the police and groups of foreigners who’ve had enough of being attacked, being targeted for something they have no control over: their birthplace.

Mahatma Gandhi Street bears the wounds of the battle. Concrete bins lie broken next to carpets of crushed glass. Black ash where a fire raged. Groups of men are huddled along the pavements, their voices loud and urgent. Police cars lurk in the side streets. Not long ago rubber bullets flew, stun grenades exploded and water cannons took slow swipes at angry crowds.

It’s autumn and the sun is about to set. Darkness will bring danger. The smell of dagga hangs in the air outside the pubs. You can feel the adrenalin like an electric charge, surging through the long, wide streets. The scene has a slight post-apocalyptic feel to it, or maybe that’s just my own adrenalin.

The man in the car asks me if I’m from Jo’burg.

Yes, I tell him. I had asked to cut in front of him moments earlier, making a sharp left turn. He must have noticed my number plate.

“It’s not safe here,” he tells me. “There’s xenophobia happening.”

I look at him, instantly understanding that he’s a Good Samaritan trying to warn me that I’ve driven into a dangerous situation.

Seven years earlier, I reported on the xenophobic mayhem that flared up in townships in and around Johannesburg. Those attacks, which left around 60 people dead, had blown in like a sudden gust of wind. They caught us off guard, burnt us like a furnace, changed us all forever.

Afterwards, we attended colloquiums, wrote books, filmed documentaries, vowed to never go back. Images of the ‘burning man’ tattooed in our memories, we reported on more isolated cases of xenophobia that continued over the years.

Then Soweto erupted, followed by some nearby areas. Mobs drove foreign shop owners out of suburbs. Again, photographs emerged of people being burnt by the flames of hate. Again, the warnings were sounded and the root causes debated.

By the time the murders began in KwaZulu-Natal, it all felt like a terrible nightmare, haunting us night after night. A painful movie we have seen before.

It felt strange to fly down to report on the latest flare up. There was a macabre familiarity, a dark déjà vu.

The attacks began out of sight, slowly drawing more and more attention. They were fuelled by the ignorant, reckless comments of those in power. Government remained silent and when it did speak, there was obfuscation and semantics, or hollow messages of assurance – “we have this under control” – and clichéd warnings to those behind the violence. Then, in one swift movement, the dragon turned to face us and there was no more confusion.

Out of its volcanic mouth came the fire.

As before, refugee camps sprung up like mushrooms. Aid agencies streamed in. Civil society began to clear its throat. Police activated response centres around the country, sent reinforcements and promised not only arrests but also convictions (unlike what happened after the 2008 attacks). Condemnations began raining down and, eventually, the leaders could stay silent no more.

In the Durban CBD, I quickly find myself in a group of foreigners from all corners of Africa. There is chaos in their eyes. Each one can’t wait to speak. They can’t agree on whether to preach peace – “what would Mandela think?”, “what about ubuntu?” – or threaten war, saying they are ready to band together to defend themselves.

As we speak, a man raises a large chef’s knife in the air announcing that he is ready to fight. The blade sends a chill down my spine. Moments later, a police van screeches to a halt, spits out a group of heavily armed officers who push people against a wall to frisk them. They disappear inside the labyrinth of a smoky pub and emerge with a man in handcuffs. The man with the kitchen knife.

At night, in KwaMashu, a security company owner speculates about why the violence has erupted. Cars tear down an open stretch of road that cuts through the steep sleeping hills. Rifle in hand, he speaks about youngsters being lured with drug money to loot stores and the dozens of shops that have been abandoned. He’s not clear on who is sending them or why. There are a lot of rumours and no easy answers.

In refugee camps, foreigners huddle around televisions or kick a ball. Stuck in no man’s land. Caught in a moment of history. Uncertain about the future.

In Lindelani, KwaMashu, a young boy talks about his brother, one of five people killed in the latest flare up in KwaZulu-Natal. Thabo Mzobe’s twin, Thabani, says he tried to warn his brother against going to witness the looting. Later, 14-year-old Thabo was shot three times and died.

There are claims that Thabo had joined the looters and was caught in a stand off with local security guards, who are armed to the teeth. His family says that’s impossible. They describe a happy young boy who loved sports and did well at maths. A boy who “never bothered anyone”.

Thabani says he and Thabo used to argue, but his brother was always willing to admit when he was wrong and apologise. He says he doesn’t know who he’s going to have his “little arguments” with now. Asked about the future, he does his best to fight back tears.

The boys shared a small room next to their grandmother’s shack. With their mother working in Jo’burg, she is looking after the pair. Their room is big enough only for their two beds. Thabo’s clothes lie neatly on the one to the right of the entrance, a naked light bulb dangling overhead.

On the sheet of metal near the door, the boys had scratched the names and logos of famous sport brands: Puma, Adidas, Reebok, Nike… Thabo used to speak about being a professional, maybe even a famous sportsman. The etchings in the metal are the manifestations of dreams and ambitions. Thabiso says he can’t bring himself to sleep in that room any more.

Photo: On the sheet of metal near the door, the boys had scratched the names and logos of famous sport brands: Puma, Adidas, Reebok, Nike… (Alex Eliseev / Eyewitness News)

Standing outside the Mzobe home, one can’t help but feel the distance. Not only in the hills and narrow winding roads, but the worlds that lie between this family and all the Twitter outrage or marches being organised by men and women with golden hearts. Thabiso and his family didn’t even know that two security guards had been arrested for the shooting.

Visiting Lindelani, one also can’t help but wrestle with thoughts about how deep the problems that lead to xenophobia are. How much leadership it’s going to take to fix them. How urgently action is needed to start transforming the economy, creating jobs and pulling people out of poverty.

Whatever Thabo was doing when he was shot, regardless of whether he was a participant or a bystander, he should never have been gunned down that night. A 14-year-old boy shot dead in the midst of something far bigger than him, something he did not yet comprehend.

So many of the 2008 victims of xenophobia were actually South Africans. I remember writing about a 76-year-old man who was beaten to death at a mining hostel in Reiger Park. His name was Arone Madombe and he was an old man who spent his days playing Fah-Fee. He was South African. So was Thabo.

In the madness of the moment, it is these lives – young and old – that are often swept away. The pain inflicted is to ourselves.

Early the next morning, I’m back in the Durban CBD, parked along Mahatma Gandhi Street. Another car pulls up next to me. Once again there are two men inside.

The passenger tries to figure me out.

“What are you doing here?” he barks.

I ask him why he wants to know.

Both men pull out police badges and flash them at me, just like in the movies. It’s a rehearsed action, a dramatic reveal.

Again, I explain that I’m a journalist and the tension melts instantly. They put their badges away and continue cruising the streets, trying to bring normality. Garbage trucks rumble along collecting trash.

I head back to Gauteng, thinking of Thabo Mzobe.

The next day, as a ‘peace march’ makes its way through the city and xenophobia is debated in parliament, a new battle erupts in the Durban CBD. DM