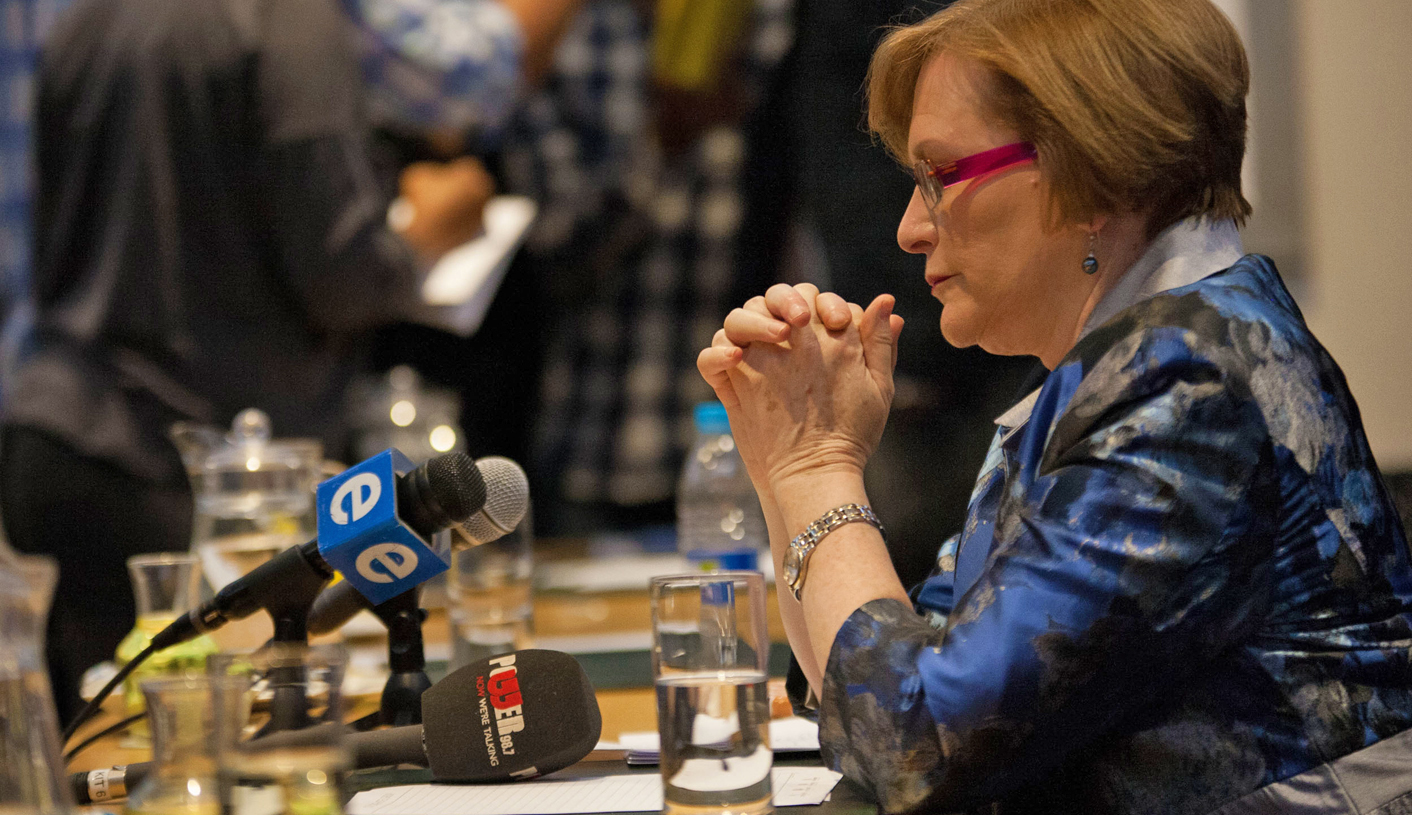 There can be no denying that Sunday’s announcement by Helen Zille that she will not be available for another term as party leader is the end of an era. She has taken a mostly white (or perceived as mostly white) grouping for minorities, from where it ended under Tony Leon, and left it as a rather different political animal. By STEPHEN GROOTES.

Helen Zille’s election as DA leader turned out to be the second-most important party election of 2007. It was one of those grey Midrand May days at Gallagher Estate, where Tony Leon walked into the voting hall as party leader. The day before hundreds of party members had arrived at their conference with the phrase “Thank You Tony” emblazoned on their shirts (unlike another conference were pictures of leaders on shirts were banned). Leon knew it was time to hand over, and his example may have been something that Zille wanted to emulate today. Who knows? One day it may become a party rule.

She was up against two other contenders, Athol Trollip and Joe Seremane. It’s worth re-mentioning here how Leon had learnt Afrikaans on the job. All three of the people who wanted to take over from him already spoke fluent Xhosa. To many of us in the media, it was obvious Zille was going to win. She had a campaign manager who was properly organised: at one point he dragged me from my comfortable little set-up next to the sound-feed, and made me watch a mini-rally being held around her. The point of his move was that virtually none of the crowd around her were white. Tellingly, her face had been on the cover of the Financial Mail the week before. Certainly a mark of the good campaign, that.

At her first press conference as leader, I must admit, I was a little trepidatious. There I was, huge laptop on my lap, anxiously watching the battery meter, surrounded by people who knew her well. Then Mayor of Cape Town, she already had a reputation as someone who didn’t suffer fools. Determined not to be one, I cautiously congratulated her before asking my question (worry about my objectivity if you like, I did the same to someone else who won a party election in December 2007). The gesture was welcomed, and the answer to my question was direct.

Later, she was asked about how she would change the tone of the DA, to make, well, we all know what the real question was. Her answer was to pause, and explain how, when she first went to St Mary’s in Jo’burg, as a German speaker, she didn’t understand why English people enjoyed the humourous put-down so much. You know, the ripping off that occurs in almost every rugby team. She said that was how many voters felt about the DA, somehow left out, as if it wasn’t for them. And she was determined to change that.

It was an honest response, and it worked for her.

Then came the hard part, trying to move the party away from some of its presumed roots in white suburbs, to other areas. She once told me that the really difficult thing in politics was building structures that would last. Of course, she was right. It’s a problem the ANC battles with; the EFF have their own massive structural issues, and Agang simply never even got there. It’s the building of branches and regions, and then building leaders. People you can trust to go out there and be capable of being effective and efficient, people who will not turn against the party at the first sign of trouble. In this, history will one day probably show that she has succeeded.

One of her first problems was dealing with the two people she had defeated. It says much to the decency of the two men that they didn’t appear to give her much trouble. While Seremane has pretty much left the political field, it’s sometimes forgotten how Trollip went from leadership contender to the last white man to lead the DA in Parliament.

From the start of her tenure, Zille has been adamant that the way to power lay through coalitions. It had worked for her in the City of Cape Town where she had become mayor, and she was determined to keep using that strategy. As things turned out, in 2009, she didn’t need to bother in the Western Cape, as the party won the province outright. And while the party’s message was changing, its final election posters put up just before voting still shouted “Stop Zuma”, with its strong echo of “Fight Back”, rather than putting forward an alternative view.

But already she was showing some signs of occasionally losing the plot a little. When there was one small delay in vote-counting that year, she uttered that the “IEC couldn’t run a bath, never mind an election”. Journalists who had dealt with her in the days beforehand felt that the elections were getting to her. But then, they do get to everyone.

It is very hard to know how much of the growth of the DA under Zille is due to her leadership, how much is due to changing demographic and class patterns, and how much is due to, well, the decision of that other big conference in 2007. For any opposition leader, the election of President Jacob Zuma, his strange path to power, and then his many strange decisions after becoming president must have been a godsend (that said, if Mbeki had won, surely Aids would have become a bigger issue over time). Towards the end of Zille’s tenure, statements would come through with the headline “Zuma’s ANC…” It was a clever and easy way of making sure nobody could forget who was the party’s leader, and a successful attempt to tie the two identities of party and leader in a damaging knot.

Certainly, one of the biggest decisions a leader has to make is how close a grip to keep on the party: too tight and you stifle new leaders, too loose and you make yourself vulnerable and run the risk of damaging the party. Looking back, Zille probably got this about right. She made sure her party was not just about her. (Not many leaders would put two other people with her on their election posters. It showed a lack of ego that is quite rare in our society.)

Zille’s real task, perhaps, was to find the first black leader of the DA. On this, she first failed. Her tie-up with Mamphele Ramphele was obviously disastrous. Her own view, as it became clear Agang had failed in the polls, was that “I offered her the world, she wanted the galaxy, and she ended up with a shack in Pofadder.” It was bitchy, harsh and strong. But very human, and, of course, very funny.

With her second move, she has probably stuck gold. Mmusi Maimane is now being taken seriously as a national leader. It would seem at this point almost complete fantasy to presume he is not going to take over. And Zille is unlikely to have taken the decision she has without making sure he’s ready to go for it.

Up close, Zille is also very funny. Inevitably, there are moments when party leaders and journalists want to have off-the-record conversations with each other. In these, face to face, she was always honest, always direct. She treats you as an adult, unlike some politicians who believe they are doing you a huge favour just by talking to you. Of course, a lot has been said about Zille and Twitter. General consensus is that Zille’s combativeness in social media did not exactly help her cause, alienating a great percentage of media players over the years. Perhaps one of the easiest bets right now would be that the next DA leader will have a much more cautious approach to Twitter.

Photo: After announcing her decision not to contest the leadership of the DA, Helen Zille waits to speak to the media, while journalists in the background interview the party’s Deputy Federal Chairperson Mmusi Maimane. (Greg Nicolson)