Shake it up: How will Zuma fill the gap of his go-to guy, Collins Chabane? 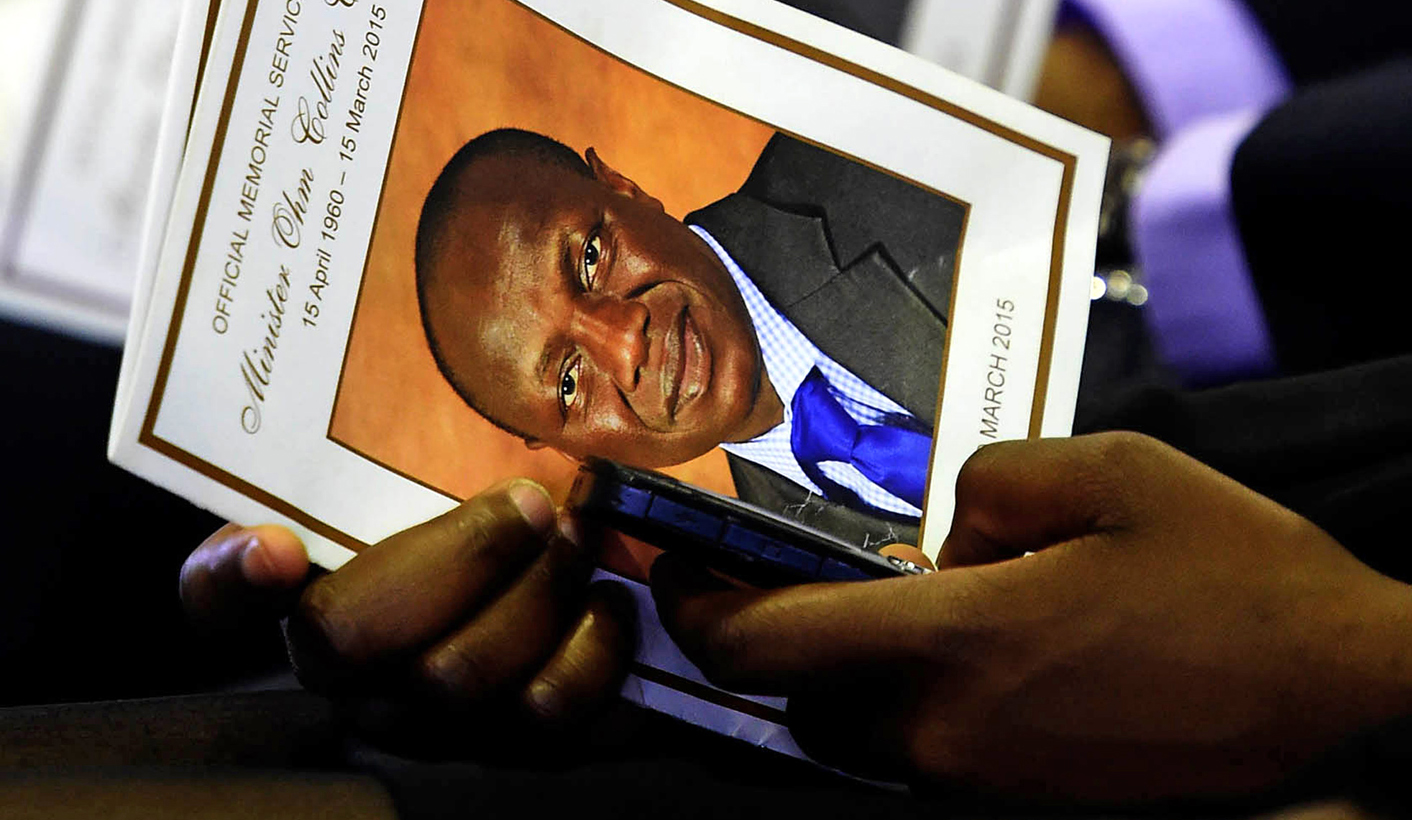 It is rare that President Jacob Zuma speaks about how he makes Cabinet appointments and relates to people in his inner circle. The selection of members of the executive is the prerogative of the president, and it is also the prerogative of the president not to share with the nation why he appoints people to certain posts. At the funeral of Collins Chabane on Saturday, Zuma spoke about his relationship with the former Public Service and Administration Minister and his initial plans for him. Chabane’s death now leaves a vacancy in Cabinet. Zuma can fill the post by promoting a deputy minister, or we could see the first Cabinet reshuffle of the fifth administration. By RANJENI MUNUSAMY.

Collins Chabane was clearly no ordinary Cabinet minister. He and President Jacob Zuma shared a close relationship, which perhaps only became fully apparent after his death. Delivering the eulogy at Chabane’s funeral in Xikundu village, Limpopo on Saturday, Zuma told how he had recruited the former minister into the ANC’s military wing Umkhonto we Sizwe and “prepared him politically and militarily for his responsibilities”.

After the ANC’s unbanning and in all the roles in which they served, Chabane and Zuma did not appear to be operating in the same circles. But after Zuma became ANC president at the party’s Polokwane conference in 2007, he appointed Chabane as his right-hand man. He headed a task team that worked on the reconfiguration of the structures, processes and workings of government, to prepare for Zuma’s takeover in 2009.

It might have been expected that Zuma would have chosen someone from his home province KwaZulu-Natal or from the alliance structures that had worked on his campaign to become party leader. But Zuma clearly wanted a strategic thinker and backroom guy to lead the redesign of the government he envisaged, not one of the rabble-rousers kicking up dust around him.

Zuma said in his eulogy that during the 2009 election campaign, the ANC received complaints about weak capacity across government and weak monitoring and evaluation.

“It became clear to us that we had to change the shape and focus of government, and also change the culture and ethos of government in order to improve service delivery. The committee chaired by Comrade Collins took all these factors into account, preparing for the fourth ANC administration, so that after elections we could hit the ground running. And indeed, we did,” Zuma said.

He drifted off text to explain that he initially intended to appoint Chabane as director-general of the Presidency. Zuma said he decided otherwise, realising that the powers of the director-general were limited. He then decided that Chabane should head up the new portfolio of Performance Monitoring and Evaluation, which had the powers to inspect the work of other ministers.

“I worked closely with him in establishing this new function in government, including designing performance agreements for ministers who in turn developed delivery agreements with their partners such as provincial MECs.

“With his sharp and incisive mind, determination and diplomacy, he was able to get the work done and to obtain support and understanding. He submitted quarterly reports to Cabinet and the public. He made his colleagues angry at times when they disagreed with his reports,” Zuma said.

So what went wrong? Clearly there was a good plan to keep ministers on their toes and get the government machinery working optimally. But the Zuma administration became bogged down with scandal after scandal that overshadowed whatever good work was being done. It is also apparent that Chabane provided the tools to keep government accountable at all layers but these were not acted on. The ministers’ evaluations were not made public so we would not know how they scored. And perhaps Chabane’s gentle manner was not enough to light a fire under poor performing ministers.

As a result, the benefits of the performance monitoring and evaluation mechanism are not openly apparent.

Chabane also took on other major roles. Zuma said last year, when the country celebrated 20 years of democracy, Chabane led the process of developing a 20-year review, critically assessing the progress of the ANC government since 1994. “The review is objective and did not hesitate to point out where the government could have done better,” Zuma said.

Chabane was also in charge of arrangements for Nelson Mandela’s funeral and led the inter-ministerial committee on state funerals, one of the things in which government has excelled.

In the fifth administration, Zuma appointed Chabane as Public Service and Administration Minister, what he called on Saturday “the heart and engine of government”. To change the public service into a “caring, efficient and effective machinery”, someone was needed who understood how government worked and knew what needed to be fixed,” Zuma said.

He said Chabane had good plans and his passion was to improve the functioning of frontline service departments and the performance of frontline staff that deal with the public directly.

Zuma revealed that Chabane had wanted to attend the reburial of Moses Kotane in the North West last weekend, but the two of them decided that he should instead attend the funeral of a traditional leader in Limpopo. Chabane was returning to Gauteng from this funeral when the fatal crash occurred that killed him and his two protectors.

Zuma said Chabane’s death had left a huge “gap”. Because there is so much that happens that is out of the public eye, this “gap” is more than just a vacancy in Cabinet. But that vacancy now presents Zuma with the opportunity to make some changes to the executive.

During his first term as president, he reshuffled his Cabinet four times – 31 October 2010; 24 October 2011; 12 June 2012 and 9 July 2013. The 2012 reshuffle was prompted by the death of the former minister of Public Service and Administration Roy Padayachie. Zuma used that opportunity to move several ministers and deputy ministers and also announced the appointment of National Police Commissioner Riah Phiyega.

Chabane’s death was tragic and unexpected, so Zuma was probably not considering any changes to the executive. But he now has the chance to hit the reset button and make changes to portfolios where ministers are not performing optimally.

Good performance has not always been the deciding factor in Zuma’s Cabinet choices, and sometimes these have more to do with ANC politics. But with Zuma now in his last term as president, he should be looking at getting the right people in the right jobs to seal his legacy and get some things right.

There are a few portfolios where the red lights should be flashing.

Communications under Faith Muthambi has been an unmitigated disaster. She is totally unsuited to the portfolio, and seems to have no clue what it takes to improve the image or flow of information of government. She has bumbled her away around government communications, alienating good and knowledgeable people, directed advertising the way of The New Age without following procedures, and is running a protection racket around Hlaudi Motsoeneng at the SABC.

David Mahlobo seems to be another bull-in-a-china shop at State Security. He too seems to be clueless about the portfolio, especially when it comes to telling the difference between protecting the state and protecting his party. Under him, “signal jamming” has been introduced into the lexicon. He was also naïve enough to believe that he could discredit Public Protector Thuli Madonsela, Economic Freedom Fighters leader Julius Malema, trade union leader Joseph Mathunjwa and former Democratic Alliance leader Lindiwe Mazibuko by announcing they were under investigation for being foreign spies.

In the midst of a massive energy crisis and a fallout in the leadership of Eskom, the Minister of Energy Tina Joemat-Pettersson has not been seen or heard of in public. While the Minister of Public Enterprises Lynne Brown has oversight over the utility, it cannot be that the Energy Minister has nothing to say about how the shortage of energy is being dealt with. If this is not her job, what is?

If the round of court battles with the Hawks bosses, Anwa Dramat and Shadrack Sibiya, and now the head of the Independent Police Investigative Directorate Robert McBride, is not being pursued with the blessing of the president, Zuma needs to have a serious talk with Police Minister Nathi Nhleko about what his job is. However if hounding these people out of the state while crime levels are spiking has Zuma’s support, Nhleko has nothing to worry about.

Of course Zuma could disregard all these controversies causing the government bad press and go for the easiest option to fill the vacancy. He can simply promote the Deputy Minister of Public Service and Administration Ayanda Dlodlo or any other deputy minister to the position of minister and be done with it. Whoever takes on the responsibility, however, will have a baptism of fire with public sector wage negotiations now at a crucial stage.

Whatever Zuma does, he will be hard-pressed to find someone he can trust and depend on in the way he did with Chabane. It is a great pity that Zuma did not use Chabane’s counsel and tools more to achieve the goals he had before he became president. His legacy could have been markedly different. DM