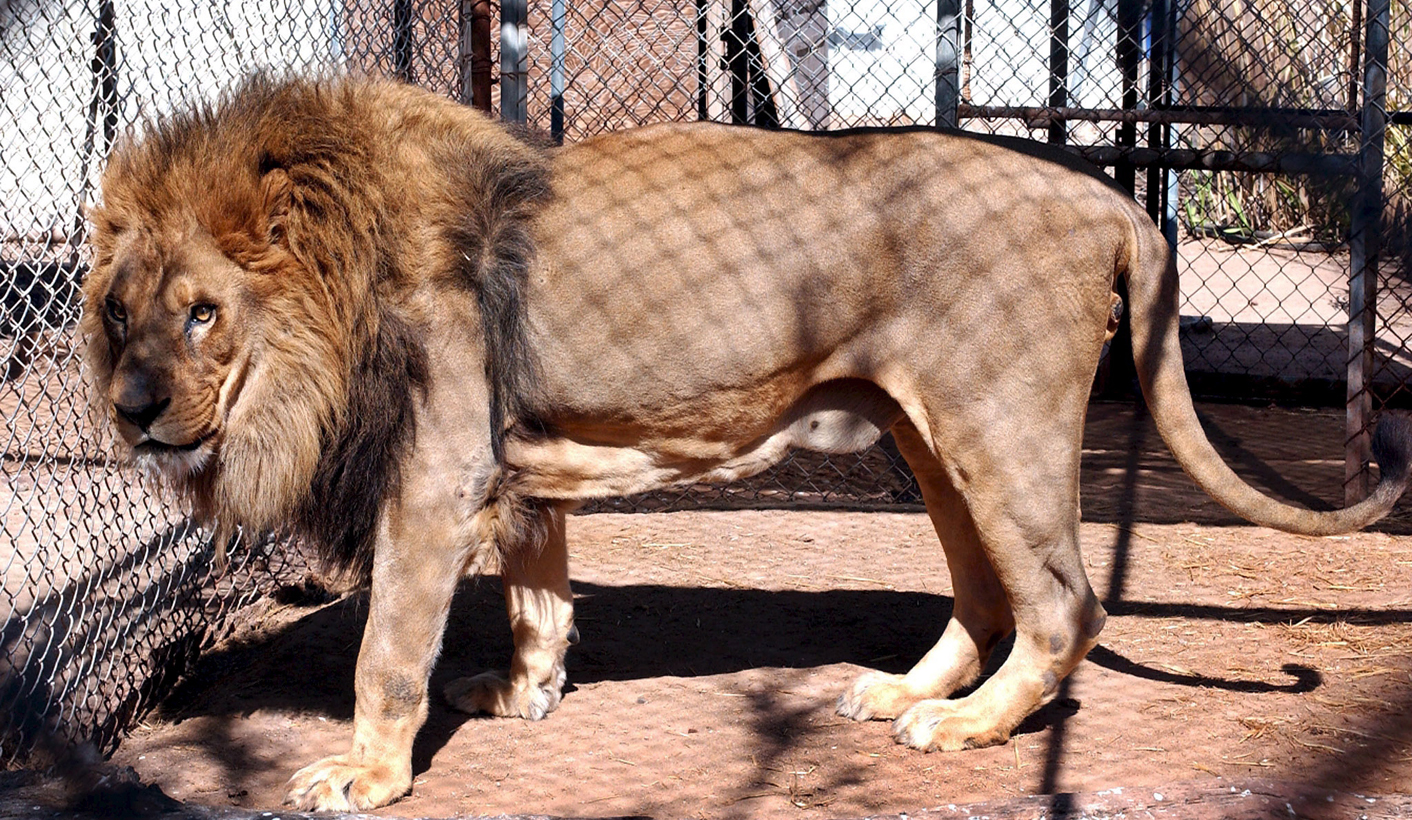 Australia’s Minister for the Environment has banned the importation of lion parts and remains into the country, saying that canned lion hunting’s time has passed. By PETER BORCHERT.

Greg Hunt, Australia’s Minister for the Environment, has delivered a broadside against the lucrative business of canned lion hunting. In a sitting of the country’s Parliament in Canberra yesterday evening, he had the following to say: “I have signed an order to prevent the importation into Australia of African lion parts and remains. This order will take effect immediately. It is part of the global movement and I hope part of a significant movement to end canned hunting forever. It is a practice that never had a time, but it is a practice whose time has surely come to pass.”

Australia’s decision is also likely to impact on all those facilities breeding lions for other commercial purposes, such as petting, “walking with lions” and the lion bone trade. Inevitably, when captive young lions pass the age of being ‘safe’ to interact with humans, the writing is on the wall for them – either to feed the market for their body parts or as targets for hunters.

Australians might not make up the largest segment of South Africa’s canned lion trophy hunting industry – that dubious status belongs to the Americans – but they do come in fair numbers each year to fell full-maned captive-bred lions with high-powered rifles and cross bows. It’s called a sport by those behind the sights, but a sport is surely a contest entered into by willing opponents? (For the uninitiated, a canned hunt is one in which the target animal has in almost all instances been bred and raised in captivity until it is mature enough to be of interest to a hunter whose subsequent ‘hunt’ is virtually guaranteed of success.) In such circumstances, to let loose with a bullet or bolt at an unsuspecting quarry that has no means or hope of escape or self-defence seems to define the antithesis of a sport.

Be that as it may, it helps to see lion hunting in the context of lions in general. In short, the species is in a bad way. Nearly a century ago, as many as 200,000 lions roamed Africa’s savannahs, but in the intervening years, that number has crashed to fewer than 30,000. Lions have vanished from over 80 percent of their historic range and are now extinct in 28 countries. Of the remaining 27 countries in which lions survive, 26 are in Africa and one is in Asia. Only seven countries have populations greater than 1,000 wild lions.

“Lions have slipped under the conservation radar for too long,” says Dr Guy Balme of Panthera, a leading NGO whose mission is to ensure the future of wild cats through scientific leadership and global conservation action. “If we do not act now, lions will find themselves in the same dire predicament as their Asian counterpart, the tiger.”

The reasons for the lion’s predicament are many and complex including retaliatory action by herders and farmers (Kenya alone loses 100 of its 2,000 lions a year in this manner), a dramatic loss of habitat, and overhunting of natural prey.

In this respect alone it would be difficult for even the most ardent so-called sport hunter to justify hunting lions for pleasure. Even in South Africa there are fewer than 3,000 wild lions, so when you consider that more than 1,000 lions are shot every year by trophy hunters, it begs the question: Where do they come from?

In the South African context, the answer is easy, for there are some 160 breeding farms here that hold at least 6,000 lions; maybe as many as 8,000. Arguments that these captive-bred and frequently highly habituated lions take the hunting pressure off wild lions is nonsense. One look at crashing lion numbers tells that story. Some breeders even pose as conservationists whose aim is to re-introduce lions to the wild. But this is empty rhetoric as very few captive lions have been successfully re-wilded anywhere in Africa. No, these lions are bred for one purpose only: canned hunting.

Hunters prefer the term ‘captive’ to canned, but Ian Michler, a South African investigative writer, safari operator, conservationist and outspoken critic of trophy hunting and canned lion hunting in particular, dismisses the euphemistic ruse. “Stop hiding behind nuances,” he says to the South African government and professional hunting bodies around the world. “Captive hunting is still canned hunting: the word ‘captive’ is as it reads – lions are being bred in captivity to be killed in captivity.”

“Aussie hunters have been paying up to $75,000 to hunt and kill lions and other exotic big game in so-called ‘canned hunting’ farms or wildlife reserves in South Africa, Zimbabwe and Mozambique,” said Australian MP Jason Wood. “Canned hunting is a cruel and barbaric practice where wildlife is bred for one purpose and that is to be killed in a small enclosure.”

Isabel McCrea, the International Fund for Animal Welfare’s regional director in Australia, said she welcomed Hunt’s ‘bold’ ban on canned hunting trophies: “This decision reflects the Australian public’s abhorrence at the inhumane practice of canned hunting, in which lions are reared in captivity and hunted in enclosures.”

“It shouldn’t exist,” added Hunt. “It is about raising the most majestic of creatures for a singular purpose and that is to kill them, to shoot them for pleasure and for profit.”

In his statement, Hunt paid particular tribute to Jason Wood, “who has brought the issue of canned hunting to the Parliament. I frankly was not aware that such a practice could exist in the 21st Century. It’s a hangover from the 19th Century in the 21st Century and Jason has been unrelenting… But it is the people that have driven this change. So tonight, I want to announce that Australia is committing to be a leader in ending the insidious practice of canned hunting.”

Michler visited Australia late last year to lobby for this outcome. “I can only laud the action taken by Minister Hunt and his Parliamentary colleagues,” he said, “and I fervently hope that Australia’s brave stance will encourage other major hunting nations to follow suit. This news is as much a victory for all those people and organisations that have been fighting against the twin horrors of predator breeding and canned hunting over the last 20 years as it is for the animals themselves.”

Michler went on to say that the Professional Hunting Association of South Africa had only itself to blame. “Instead of coming down hard on canned hunting outfits, their silence has been a tacit approval.”

In the coming week Michler heads off to the European Parliament where he will be lobbying for similar action from Europe. “In time, we will also target the United States,’ he said, ‘as this is where the majority of hunters come from.” (Some 80 percent of lion trophies are shipped back to the United States.)

In his summing up of the situation, Minister Hunt had this to say: “In our own way we are all, all custodians of the great creatures of the world. For me, for us, for all of us here at Federation Square, the lions are an iconic reminder of the great plains of Africa, of the natural world, of the majesty that has been and I hope and pray, and to which I am committed, will continue not just for our children, but for generations hence.”

IFAW said canned hunting had contributed to this decline through direct kills and also by skewing the genetic balance of lion populations by taking large males out of the gene pool to be shot.

“This decision reflects the Australian public’s abhorrence at the inhumane practice of canned hunting, in which lions are reared in captivity and hunted in enclosures,” she said. DM

Photo: A lion is photographed in a caged enclosure at a captive breeding centre for large predators at an undisclosed location in South Africa’s Free State Province in an undated picture released 16 November 2005 by the International Fund for Animal Welfare (IFAW). (EPA)