Analysis: Are some Cape Town fires hotter than others? 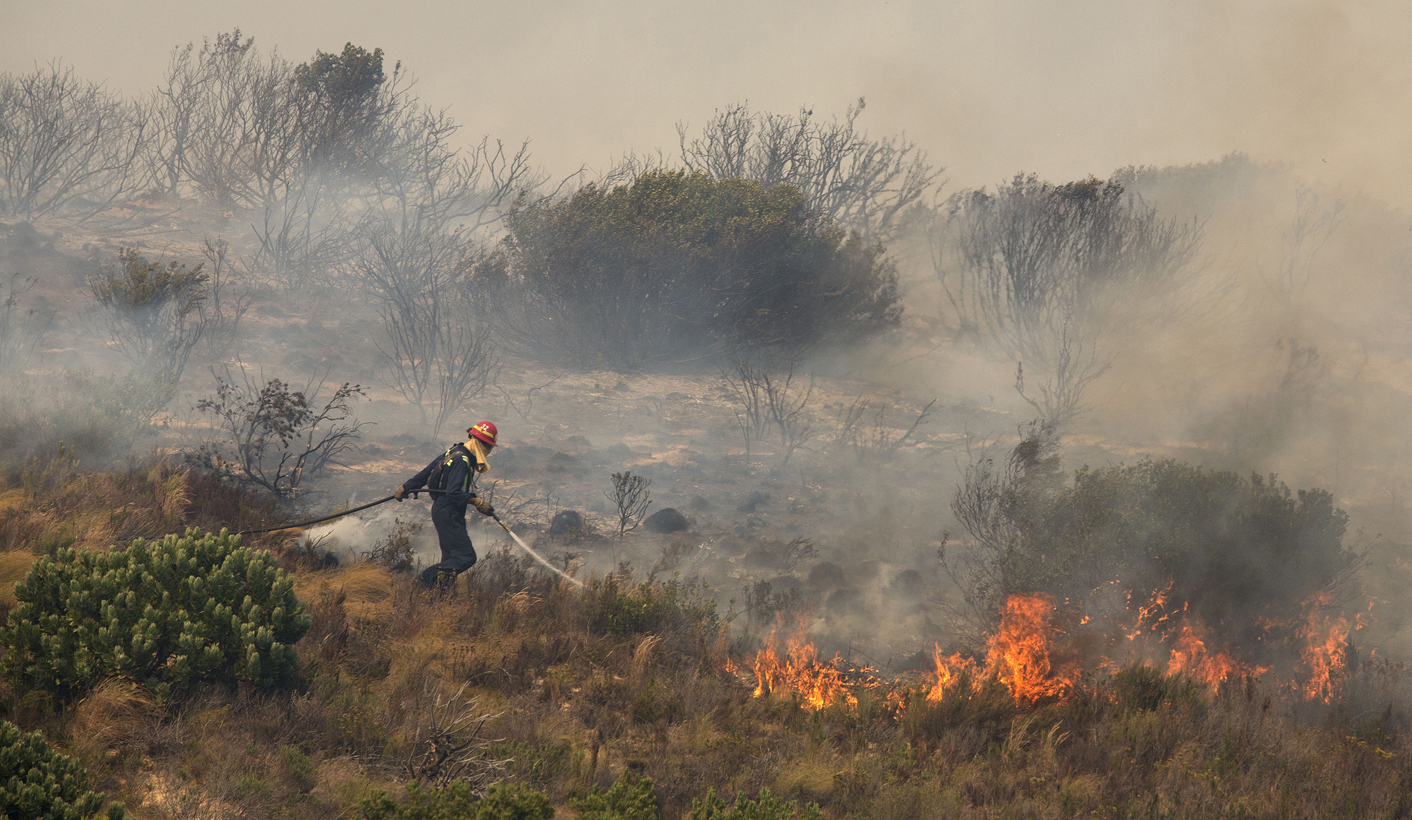 Last week, the worst fires to hit the Cape Peninsula in many years burnt thousands of hectares of vegetation, took two lives and 13 houses, and saw at least 500 residents evacuated. Capetonians responded with heartwarming displays of community spirit, donating food, drinks, and millions of rand after being moved by the heroism of firefighters – some of whom were unpaid volunteers with day-jobs, and others who are remunerated just R86 per day. The latter firefighters live in areas where devastating fires are more commonplace. By REBECCA DAVIS.

Fires are nothing new to Cape Town, where large stretches of arid vegetation become a tinderbox during the hottest and windiest months of summer. Not since 2000, however, has a fire raged out of control in the manner that it did last week. The story attracted international media attention, likely aided by some incredible and terrifying photographs.

At home, much of the attention was on the men and women battling the blaze – 2,000 in total, according to Western Cape Premier Helen Zille. Some were professional firefighters. Others were volunteers with the Volunteer Wildfire Services, slogan: “Holding the line between Fire & Fynbos”. The website of the Volunteer Wildfire Services states that they have around 180 members, most of whom have permanent jobs elsewhere, or are students.

More – around 400 – were members of the Working on Fire team. The Working on Fire (WoF) project is not an initiative of the City of Cape Town; it is a project of national government which is part of the Extended Public Works Programme.

WoF recruits would-be firefighters from disadvantaged areas and trains them. On its website, it states that there are currently more than 5,000 beneficiaries, of which 29% are women. Last week GroundUp profiled one of the WoF crew members fighting the Cape Town fires (you can also read the profile on Daily Maverick today).

GroundUp reported that 22 year-old Khayelitsha-resident Anelisa Flani, who said she loved her job, is paid R86 per day during fire season, and R1,800 per month out of the season. (A Deputy Director position at the Working on Fire project is currently being advertised with a salary of R630,822 per annum.)

Daily Maverick asked JP Smith, Cape Town mayoral committee member for safety and security, if it was a source of unease that firefighters like Flani – who work seven days a week at this time of year – were paid so little while risking their lives to defend property. Smith described it as a “very complex debate”.

“We have made a huge investment in the fire department, and done everything we can to professionalise and equip it,” he said. “With that said, all the staff is not enough when you have a disaster. Suddenly you have a very elastic need, and need to bolster numbers by 500. We could never support a force that size.”

Smith pointed out that it is common for countries around the world to supplement their fire services with volunteers.

“The plus side is that [the WoF crew] are developing qualifications and skills to stand them in good stead in future,” he said.

Firefighters across the board last week were praised for their courage and commitment by Cape Town residents, putting in long hours in situations of great danger – as tragically illustrated by the deaths of two firefighters.

Donations of food and drink, from individuals and local shops and restaurants, poured in at such volume that at certain points the public was asked to stop donating. Within one day, a telethon appeal held by local radio stations to raise funds for Volunteer Wildfire Services and other organisations battling the blaze had raised more than R3 million. It took just under four hours for the total to top R1 million.

While there are regular collections and relief efforts for victims of Cape Town disasters, the response to last week’s fire represented a possibly unprecedented display of generosity and civic spirit in the city in recent years.

Yet fires in Cape Town and elsewhere are extremely common, and often the loss of life, homes and property is much more severe. For township residents like firefighter Flani, fires present a constant threat. In Smith’s words: “Almost the entire of our firefighting budget is spent in poor areas.”

Between 1 December 2012 and 8 January 2013, almost 5,200 people were made homeless by shack fires in Cape Town. 4,000 were left homeless in just one blaze on 1 January 2013, when a fire at BM Section in Khayelitsha burned down 1,000 shacks. Khayelitsha residents regularly claim that such fires are not swiftly attended to, unlike blazes in wealthier areas, whereas City officials maintain that the sprawling layout of townships make the speedy provision of emergency services more difficult.

“I think this points to the underlying issue of how we deal with informal settlements, particularly the lack of planning and resources,” the Social Justice Coalition’s Dustin Kramer told the Daily Maverick.

“It’s easy to blame residents as if it’s their fault, but the reality is that in Cape Town there are over 200 informal settlements, over 140,000 households, and we have to accept that informal settlements really require serious planning and intervention.”

The problem of “structural fires”, as they are known, is by no means a problem unique to Cape Town. Smith says that Cape Town’s Disaster Management Team is the only one in the country that provides ‘Housing Starter Kits’ to township residents who have lost their homes.

It has also been reported that Cape Town has the lowest overall fire mortality rate in the country, at 2.6 per 100,000, while in other metros the figure rises to seven per 100,000.

“If there’s been a reduction obviously that’s a positive thing, but we still see devastating fires and tragedies all the time,” Kramer said. “Improving resources for firefighting is great, but unless there are proper plans in place for informal settlements, we’ll continue seeing fires.”

What was it about last week’s fire in particular that captured the public – and media’s – imagination? One may draw various conclusions from the fact that the areas predominantly affected were relatively affluent, but it’s undeniable that the scale and duration of the blaze itself was also intrinsically dramatic.

“A fire that lingers for five days become major news. No structural fire lingers for five days,” says Smith. If firefighters had not acted effectively, he points out that many poor neighbourhoods adjacent to the mountain – such as Imizamo Yethu, a township on the outskirts of Hout Bay – would have been next in line.

Smith also suggested that it was characteristic of local media to pay more attention to this fire than those blazes affecting residents in informal settlements, however. “There is a persistent and aggressive distortion of the media in terms of what they cover,” he said.

Kramer expressed hope that the public support for last week’s relief efforts would be replicated on other occasions.

“It’s positive that there was action taken and an outpouring of funds for firefighters, but we would like to see far more involvement across society, particularly in middle-class areas, to deal with the ongoing tragedies and ongoing conditions in which people live,” he said.

“Overcoming this city’s spatial segregation and legacy is not easy and is going to take many years.” DM

Photo: A firefighter tries to stop a fire from spreading on Chapman’s Peak in Hout Bay, Cape Town on Monday, 2 March 2015. Disaster crews have been working around the clock fighting fires in the Southern Peninsula. Picture: Nardus Engelbrecht/SAPA