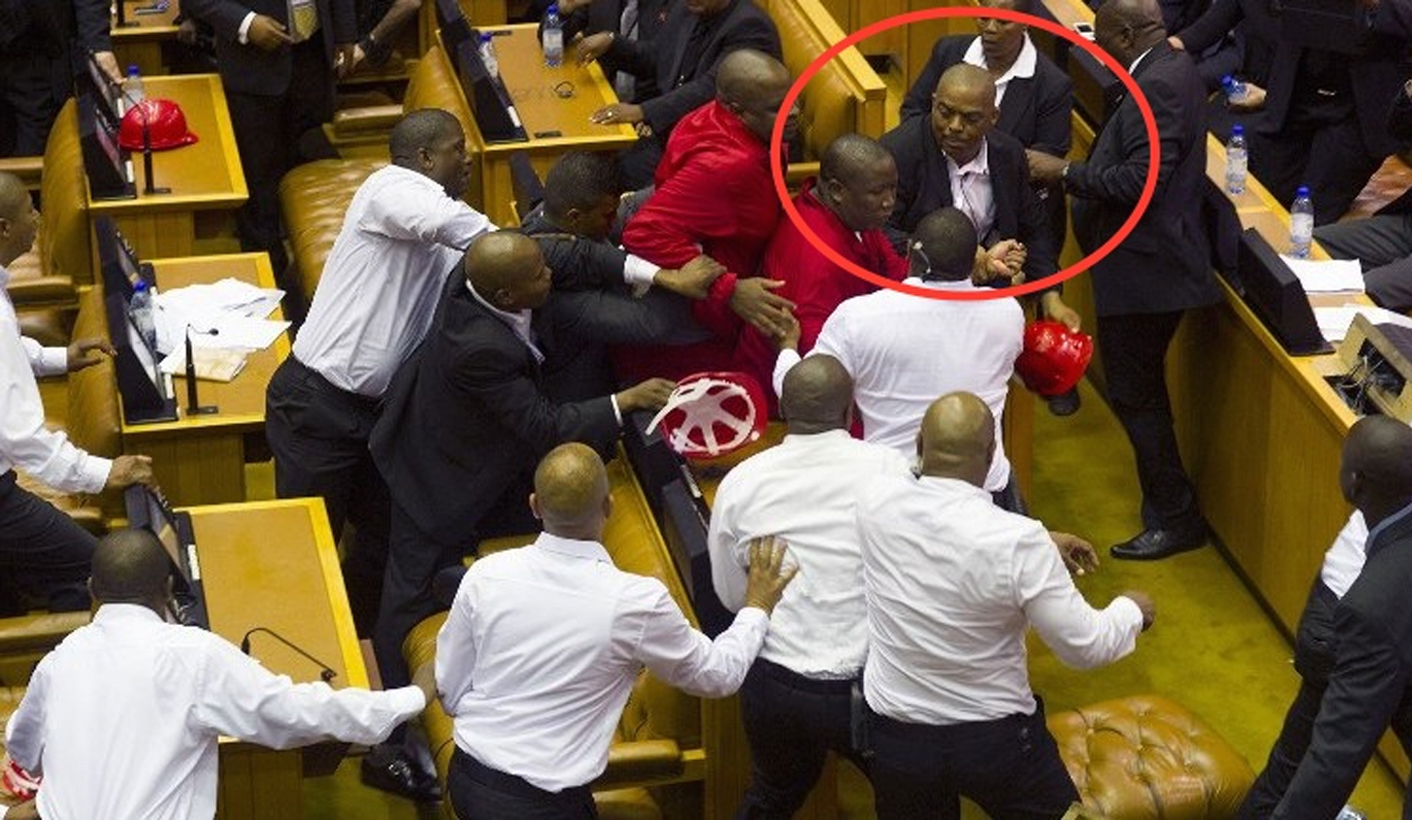 A Public Order Police officer, who appears to have played a leading role in forcibly removing Economic Freedom Fighters leader Julius Malema and other EFF MPs from the State of the Nation Address this week, has boasted on Facebook of a “hunt for Juju” in the “once hallowed halls of Parliament”. Wearing a black Hugo Boss suit jacket, Captain Walter Prins led a phalanx of white-shirted “security forces” into Parliament on Thursday after they were instructed to forcibly remove Malema and two other EFF MPs from the House. By JULIAN RADEMEYER.

Daily Maverick identified Prins, 43, from a high-resolution photograph taken by the agency EPA. It clearly showed his security pass which designated him part of a “high risk” detail and stated that “WW Prins” was from “SAPS”, the acronym for the South African Police Service.

Photo: Special security police who will be on duty inside the National Assembly arrive for the opening of parliament ceremony and the president’s State Of the Nation Address in Cape Town, South Africa, 12 February 2015. EPA/NIC BOTHMA. (Mr Prins is in the black suit, in front.)

Prins’s Facebook posts over the past six months raise disturbing questions about whether he and other members of the Cape Town Public Order Police (POPS) unit that he belongs to felt they had a blanket mandate to target Malema.

On 30 August 2014, just nine days after riot police wearing body armour and carrying riot shields and batons were deployed in Parliament for the first time, Prins typed out a Facebook post to his colleagues. “To all the members of POPS Cape Town,” he wrote in Afrikaans, “I wish you strength and thank you for a helluva month. Particularly the guys in my platoon…Ps. Don’t worry, at some stage in the near future we’ll go back into Parliament for old Julius! LoL.”

Then, on 20 September, Prins posted three photographs on his timeline of police in the foyer of the parliament building. The pictures appear to have been taken on 21 August as police entered the precinct. Prins can be seen in all three wearing a police uniform and riot gear. “In the once hallowed halls of Parliament, in a hunt for Juju LOL,” he wrote underneath.

This week Prins was at the head of the white-shirted “security forces” as they entered the House of Assembly and manhandled Malema and other EFF MPs. In photographs taken by Agence France-Presse, Prins can clearly be seen grappling with Malema, (Main photo, by AFP) and Shivambu (following photo, by Greg Nicolson)

A Facebook page for “members, ex-members and friends” of the Cape Town Public Order Police unit later posted a video of the confrontation, remarking: “[I]n the news again! What a day it was!”

On Friday, Prins also posted a link to a YouTube video of the melee. “Good work tjom. That’s what i want to see happing to poepol (sic) who think that Parliament is a circus,” a friend commented approvingly.

Watch: Removal of EFF from SONA 2015. (Video by Ranjeni Munusamy)

Contacted on his cellphone on Saturday, Prins told Daily Maverick that he could say “absolutely nothing about Thursday evening”.

“I can’t admit or deny anything,” he said when asked if he had been in charge of the police detail that clashed with the EFF. “We signed an oath [of secrecy]. I can’t tell you anything.”

Asked about the Facebook posts, Prins said they were meant jokingly. “They are old posts that you’re talking about. You can see it was just between me and my friends.”

Asked if he had it in for Malema, Prins said. “No, no, no my friend. It is just the job. We are just doing our job.” DM