GroundUp Op-Ed: Curro schools and segregation – back to the future 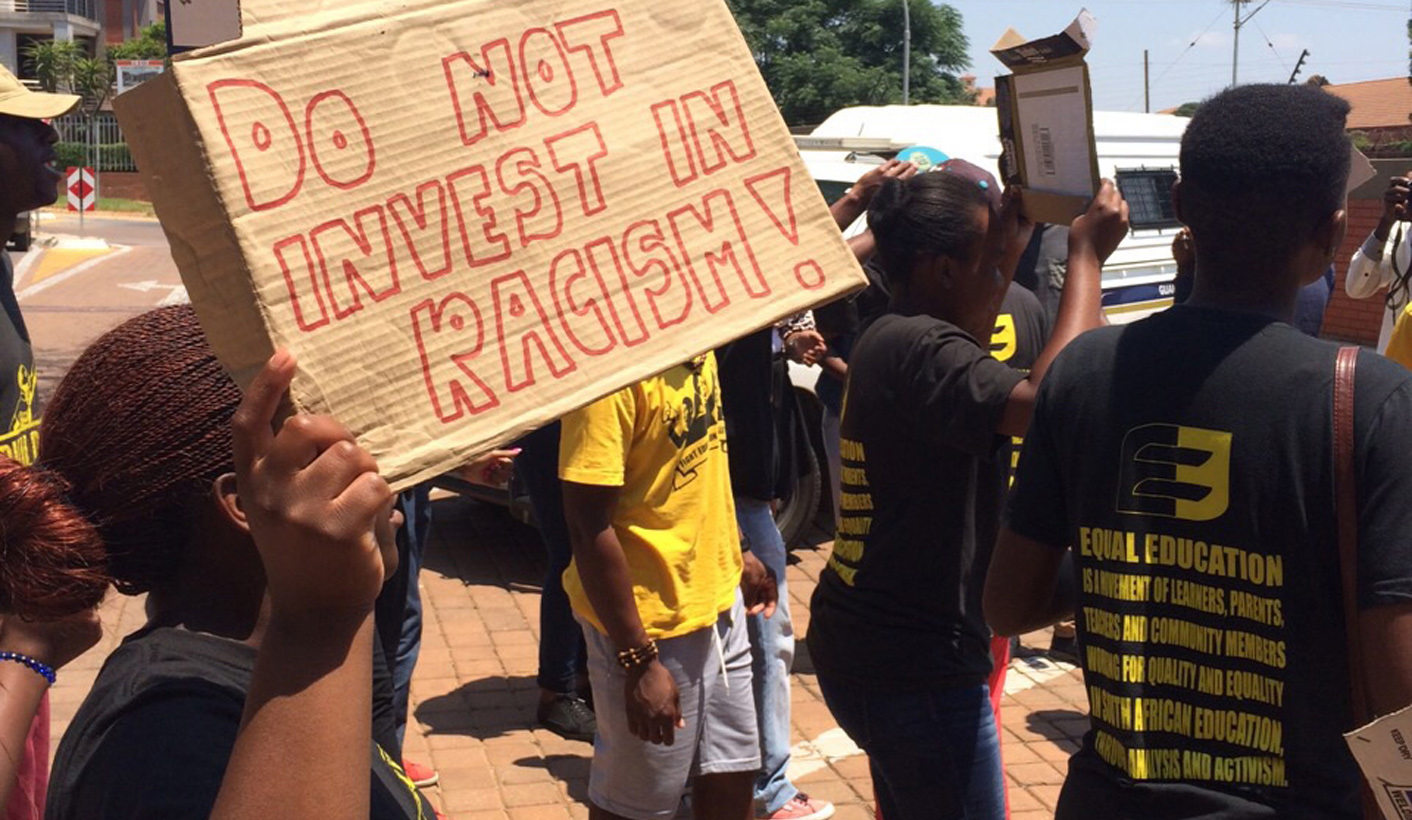 Today, Equal Education is protesting outside the Public Investment Corporation because it is an investor in the Curro private school chain. DORON ISAACS, Equal Education's Deputy General Secretary, explains his organisation's concerns with Curro to GROUNDUP.

As is now widely known, Curro, the private school chain, has been practicing racial segregation in at least one of its 33 schools.

Curro readily admitted the segregation. The first justification was that it was “just because of friends”. Children are apparently “able to make friends with children of their culture”.

But as the Ahmed Kathrada Foundation pointed out, this “is exactly the kind of argument put forth to justify Apartheid, and has no scientific or educational basis”.

Curro’s next defense was more honest. “We were responding to the white flight.” White parents had urged the school not to enroll “so many blacks”.

Although the school has now apologised, it seems that in Curro’s moral universe it is acceptable, necessary in fact, to accommodate the racist prejudices of white parents who do not want their children in schools where the majority of children are black.

But there is a parallel universe in which the fees of black students are highly desirable. This contradiction in Curro’s identity is the key to understanding the tensions now playing out in parking lots of its schools.

In a filmed 2012 interview Curro’s CEO, Dr Christiaan van der Merwe, offered insights into the company’s founding motivation: “The phenomenon of private school education was well renowned among our English parent society over the past 30 years. Ironically there weren’t many Afrikaans schools, so the moment Curro opened this market in 1998 suddenly awareness became apparent in the Afrikaans parent society. We opened a brand new market. So Curro Holdings is literally the only group in South Africa that provides Afrikaans private school for the Afrikaans society.”

But Curro later realised the opportunity presented by the growing black middle class.

Curro’s Chairperson, businesswoman Santie Botha, is Chancellor of Nelson Mandela Metropolitan University. In her inaugural speech to the university she called for “Afro-investment positivity”, and made clear that she understands Africa as a vast untapped market, “the last great growth frontier of the world”. It is a market “small in relation to Africa’s geographic size, but still a very large market”.

The company’s originally-intended clients are now rubbing shoulders with this “very large market” and seem displeased by the experience.

Curro attempts to cut across this racial divide by using religion as a common denominator. The constitution of the schools states that they are “based on Christian principles”. Top of the “commitments” is “Christian ethos and values”.

The Code of Conduct makes it prohibited to “display any form of religious orientation or political support or ideology through physical appearance”. Such a clause, seemingly neutral, can represent a progressive separation of religion from secular education. But in a school so openly committed to Christianity it is hard not to read it as intended to restrict those, like Muslim or Jewish students, who may want to wear head coverings.

In reality the ethos of Curro Holdings is profit. It’s an ethos finding favour with investors, who gave the company’s share price a 7% jump in the wake of the revelations of racial segregation.

Ken Donkoh, the co-founder of a large Pearson-backed chain of private schools in Ghana, articulates the zeitgeist: “The low fee education space is quite interesting. It’s a huge market. It’s getting more and more interesting… There’s huge wealth at the bottom of the pyramid.”

He identified the global education industry as a bottom of the pyramid market emerging as a major opportunity, and called for “deregulation and the diminishing role of governments”, which he said would mean a “more hospitable investment climate for multi-national corporations entering developing countries”. Knowing that $1,500 is indeed not a fortune, he said that “providing access to credit” would be necessary for the plan to succeed.

This is a hierarchy of schools, detailed in Curro’s financial statements, in which everyone gets the quality of education they can pay for. The right to education applies, until you are unable to buy it. Although not dissimilar from parts of the public education system, once privatised it is probably beyond reform. It’s a terrifying vision of the future.

Equal Education, where I work, spends its time pointing out how the public education system is failing. The appeal of private schools is partly due to a lack of confidence in public schools. But international evidence that private schools will outperform their public equivalents is thin and mixed, while the evidence that they increase segregation and inequality is compelling.

We understand the choices of parents who only want the best for their children, but as a matter of social policy, private schooling should not be encouraged. That the state-owned Public Investment Corporation is a major investor in Curro is disgraceful.

Democratically regulated markets have a vital role in the production and distribution of goods and services, including in regards to aspects of education. But profit-making schools of the Curro sort are incompatible with the educational project and an ethos of learning in which the best interests of all of society’s children is paramount. DM

This feature by Doron Isaacs was first published at www.groundup.org. The opinions expressed in this article are solely those of the author. No inference should be made on whether these reflect the editorial position of GroundUp.