Bophelong: The march that wasn’t, and the protest that didn’t 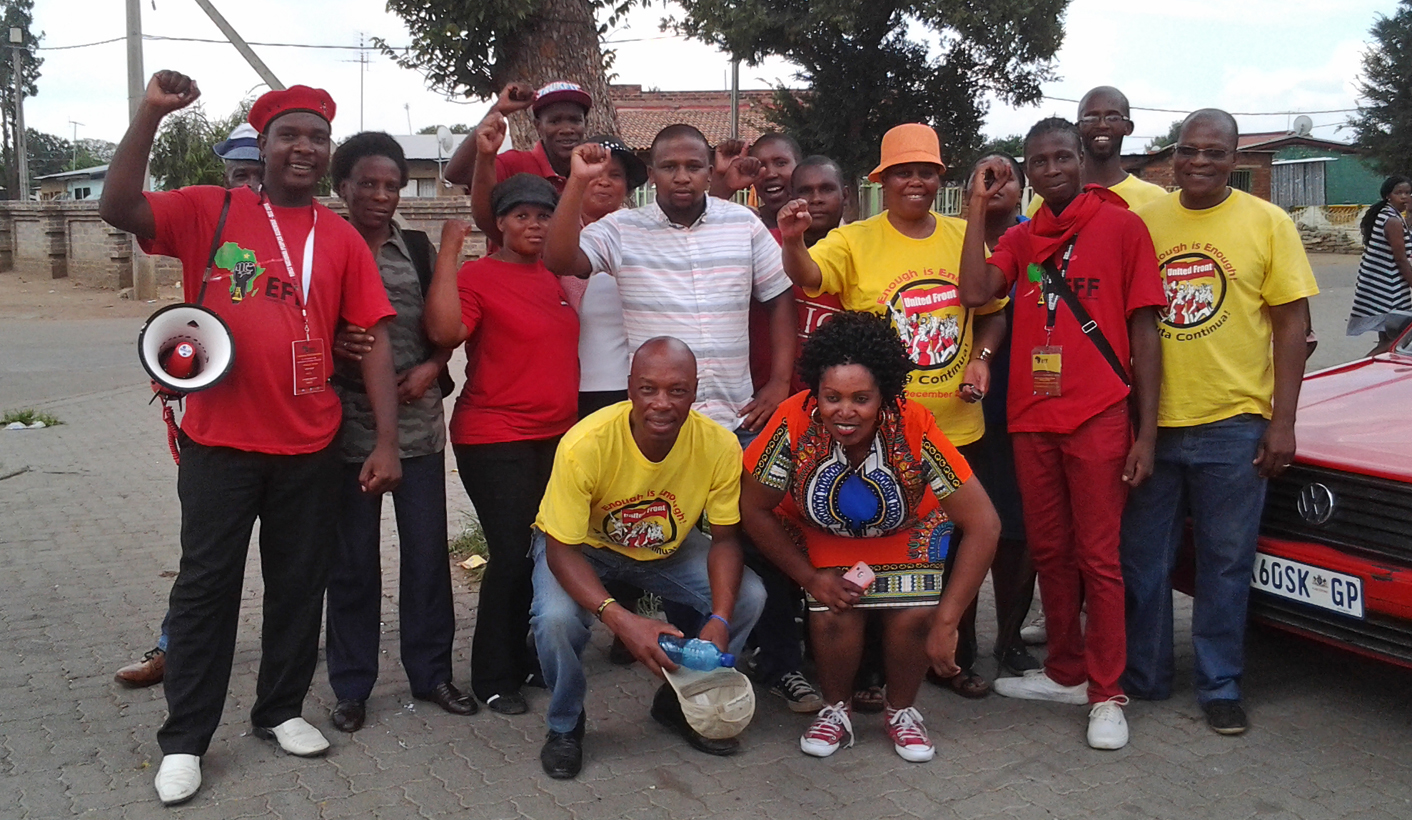 Last Friday, the United Front, along with the Economic Freedom Fighters, organised a march through Bophelong, a township of about 46,000 people in the Emfuleni district of southern Gauteng. It's a volatile area with a history of unrest: nearby Boipatong and Sharpeville, the sites of notorious massacres. The UF last week wanted to petition the council of Emfuleni district to supply them with a 24-hour clinic and a police station. They invited me, as a journalist, to come along to witness how the UF was mobilising. The march never happened; the protest never took place. And that, on several levels, is a deeply worrying fact. By NIKI MOORE.

For a place that has such a history of violent and determined protest, the Friday march was subdued to the point of invisibility. I met up with the delegates from the United Front and two organisers from the EFF, and we went off to the gathering place, about a block away from the local municipal office. There were a number of police vehicles parked outside the council block, but they proved to be unnecessary. As it turned out, not only the police outnumbered the protesters, but the organisers did as well.

After half an hour of energetic singing and dancing on the spot, only five members of the community had turned up. People walked past, carrying their shopping, and gave the gathering some curious looks. Some kids playing in the street joined in, sitting on bricks and watching the proceedings.

As time went on, and three o’ clock became four o’ clock, it became obvious that there was going to be no support for this march. Doctor (his given name) Madumisa, the organiser of the march, was bitterly disappointed.

“We applied late for permission,” he admitted, “and therefore we were not allowed to march, we were only allowed to picket in front of the council.” This contradicted dark mutterings that the march had been sabotaged. It also pointed to a worrying lack of organisational ability within the UF. But there were other, more sinister reasons why no-one turned up.

One old gent, who was pulled in by curiosity and then watched proceedings for a while, vouchsafed that the people of Bophelong were sick and tired of protests, community meetings and political parties.

“We are always getting called to meetings,” he said. “They tell us that we are going to get jobs, and that we must sign a paper with our names. Then they take these names to the council and say that they will be employing all these people. Then they get the money, and they don’t know us after that – the money and the jobs go to their friends.”

He and his friend also expressed a deep distrust of politics. The people of Bophelong are longer interested in politics, or political parties, they said.

“We know that the ANC members go door to door in Bophelong,” said UF organiser Mirriam Makhalemele, “and they tell people that if they protest or march, they will lose their RDP houses and grants.”

This allegation was independently confirmed by a DA councillor for the district, Simon Nkosi:

“Yes, they go door to door and they threaten the population. But another problem is that young people, they are not interested in politics or activism, they are only interested in parties and social media. So the old people are threatened by the ANC, and the young people don’t want to get involved.”

The two EFF organisers were disappointed as well, but had a different reason: “We came along as representatives,” said one. “We did not think that we needed to come as a mass. We are here to represent our branches. But next time, it looks like, we are going to have to bring our branches.”

After some desultory waiting around for two hours, a lot of singing and dancing, and some fiery speeches delivered to the eventual audience of about twenty, the decision was made to postpone the march, organise it properly, and bring the masses.

Bophelong is a depressing place. The ‘CBD’ consists of shacks, spaza shops, rutted roads and a littered parking lot. But one thing startled me completely: every third car or so that drove past us on that long, hot Friday afternoon was a brand-new Merc, BMW, 4×4 or drop-top sports car. These are cars that would draw attention even in the most upmarket ‘leafy suburb’ or luxury city hang-out.

“Just look at the cars!” I said to Mirriam, as three spanking new luxury sedans drove past in procession. “How can people claim to be poor and needy when they drive cars like that?”

Mirriam laughed. “Those are councillors and council employees, who are coming to look at us to see how our march is progressing,” she said. “And they are councillors’ friends, who get the tenders. They are also coming by, to celebrate the fact that our march has not worked.” She paused and added, almost as an afterthought: “This is a very corrupt council.”

It is also a bankrupt council. According to the Emfuleni 2013/2014 Annual Report, the municipality ran at a loss of more than a third of a billion rand during the financial year: “These conditions indicate the existence of a material uncertainty that may cast significant doubt on the municipality’s ability to operate as a going concern,” the report noted.

According to councillor Simon Nkosi, half of the district’s income is spent on salaries. “Everyone earns huge salaries,” he said. “But they don’t do the work, they call in contractors. So the work is being paid for twice.”

This is confirmed by the figures: the district’s budget is worked out on an 85% collection rate (those people who pay their bills). The salary portion of the budget is 35% of this (which is already extremely high, as the norm should be 25%.) However, the real collection rate is closer to 65%, which means that yes, half the income is spent on municipal salaries. What is left is spent on operating or running costs, leaving nothing over for infrastructure. This is why Bophelong looks the way it does: luxury cars driven by highly-paid officials on crumbling roads past shacks and spazas.

Bophelong has almost 50% unemployment. The only jobs going are those in government, which means that the entire council and all the contractors have a strong vested interest in keeping the status quo.

The United Front is well aware of this, and is campaigning heavily to mobilise people to vote against the ANC. “We are going to stay a-political,” says Makhalemele. “The UF will never be a political party, it will always be a civic organisation. During the local government elections, if independents stand for election, and they come from credible groups that work with us, like community leaders, then we will support them.”

This might be a very difficult task. In general elections, voters usually shun independent candidates. In Bophelong, however, it seems that people have shunned the democratic process altogether. Young people are not interested in politics or voting, older people vote from fear or sentiment. In the last municipal elections in 2011, the voter turn-out in this region was a little over 50%. People might be turning away from the ruling party, but they are not turning towards any opposition.

Bophelong is a strange place: a desperately poor township occupied by lots of rich people. A place with a strong protest history with residents not interested in protest. The ‘Young Turks’ of the UF and the EFF, by the looks of things, have a long way to go. DM

Photo: The EFF and the UF organisers are upbeat, despite a lacklustre response to their protest. (Niki Moore)