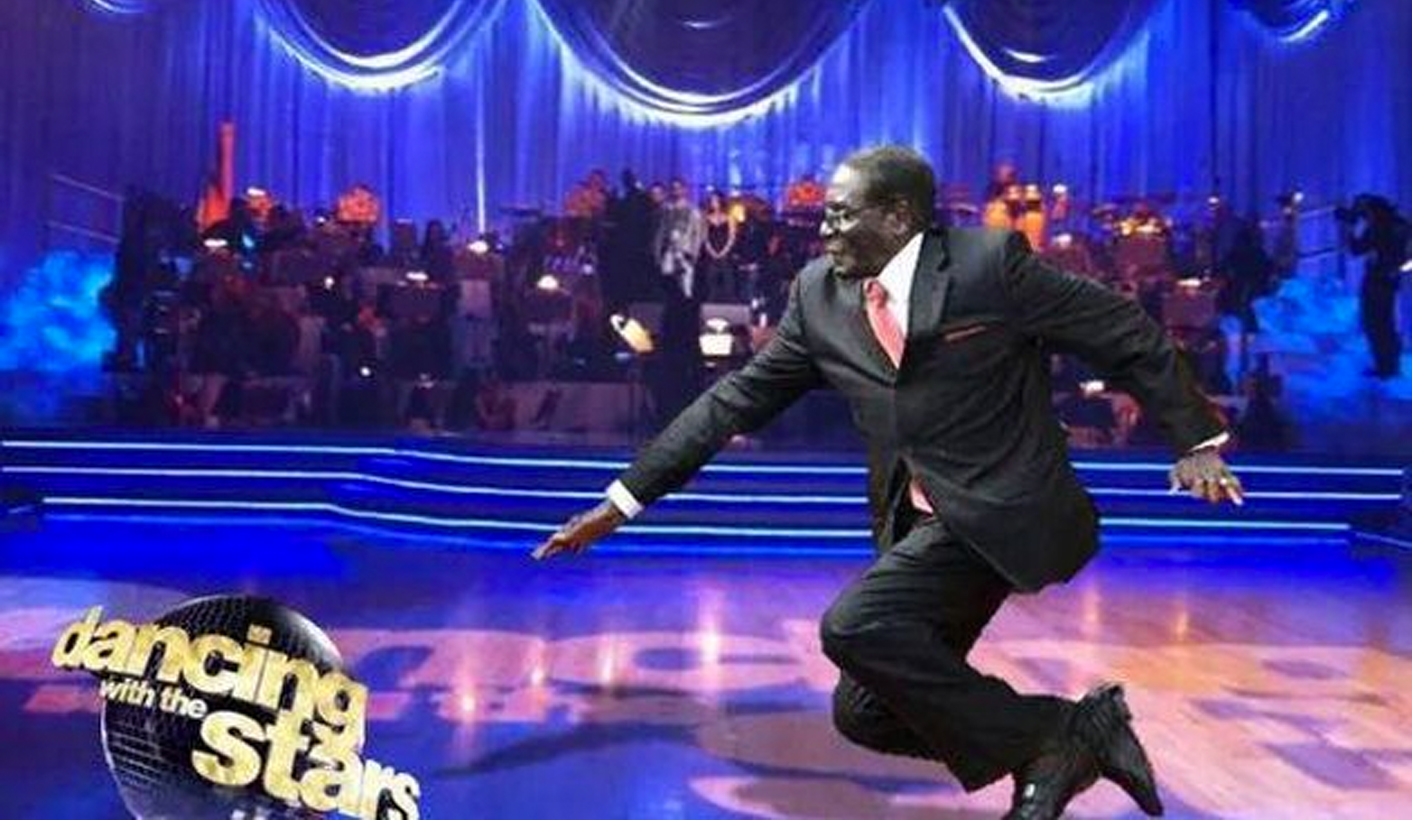 Go on, laugh if you want to. We all know Mugabe deserves a little public humiliation. But let’s not read too much into his accidental stumble, which reveals more about the opposition’s frailties than it does his own. By SIMON ALLISON.

The tumble made headlines everywhere – The Washington Post, The Daily Mail, the New York Times, Associated Press, to name but a few – and the internet did its usual line in cruel and casual (and wickedly funny) mockery, turning him into a viral meme that we’ll no doubt be seeing plenty more of. There was the old man, mid-fall, dancing on ice; there he was losing the Premier League for Liverpool; there he was caressing Kim Kardashian’s bottom.

For the old man in question – a certain Zimbabwean president by the name of Robert Gabriel Mugabe, a man who treasures his pride and his dignity above much else – it was a mortifying episode, especially coming as it did just days after one of his greatest triumphs. Last week, Mugabe was elected as chairperson of the African Union, the fulfilment of a long-held ambition and a tangible symbol of the esteem in which he is held by so many of his continental counterparts. But pride goeth before a fall, and plenary votes don’t get much repeat business on YouTube – unlike comedic presidential fails that come with a hefty dose of guilt-free Schadenfreude.

Mugabe’s team of minders and bodyguards were unable to react in time to prevent him going down, but they tried desperately to limit that damage by forcibly deleting the photos and videos of onlookers. A hopeless task in the digital age. Soon the footage was out, and their clumsy interventions had only made the story juicier. “Robert Mugabe falls over – then tries to BAN video of embarrassing trip,” screamed the Mirror (needless to say, the caps are all theirs).

Even worse was the bizarre intervention of information minister Jonathan Moyo, who, despite the video evidence to the contrary, insisted that the president didn’t really fall, and stopped just short of saying that Mugabe meant it all along and how dare anyone imply otherwise: “Nobody has shown any evidence of the president having fallen down because that did not happen,” said Moyo.

Moyo continued: “The hump on which the president tripped was formed by two pieces of the carpet which apparently had not been laid out properly where they joined. And to be honest with you, even Jesus, let alone you, would have also tripped in that kind of situation.” Yes, Jesus. “In the circumstances, there’s really nothing to write home about the nonsensical celebrations by malcontents who are imagining a fall that never was since it was actually broken by the president himself.”

One thing is true, at least, in Moyo’s parallel universe: Zimbabwe’s malcontents, and there are many, were celebrating. And, even if it may seem unedifying to amuse oneself with the frailties of a geriatric, it’s hard to blame them: so much has gone Mugabe’s way over the last couple of years (and even decades) that perhaps he deserves a little dose of international humiliation.

“Mugabe, who has almost become immortalised by those around him, had miscalculated a simple step and was on his knees. In an instant, he became human, his pristine image of perfection, shattered,” wrote Teldah Mawarire, the Mail & Guardian’s Africa editor and a Zimbabwean herself, in a beautiful op-ed. “Most Zimbabweans could not hide their feelings of euphoria…[Diaspora] Zimbabweans could not hide their collective pleasure. They just loved the fall of a dictator who caused them to flee to foreign lands.”

While sympathetic, Mawarire couldn’t join in whole-heartedly. It felt wrong to take joy in the misfortune of a 90-year-old, she wrote; it violated the basic tenets of Shona culture, which include a strong emphasis on respect for elders. Perhaps, she observed, the reaction of many Zimbabweans said more about them than it did about Mugabe himself:

“By falling, Mugabe became a mere mortal. In the full glare of the public, the propaganda machinery could not spin him out of his ordinariness in that moment. But by his fall he also laid bare the trauma of Zimbabweans in the diaspora and at home. The national conversation must now begin in Zimbabwe to heal the future.”

That future, however, is still far away – and Mugabe’s fall is suggestive of just how far. It is a sad indictment of the state of the opposition that so much meaning is assigned to an accidental stumble. In the absence of anything else, that’s all Zimbabwe’s “malcontents” have got to celebrate. Mugabe, meanwhile, will pick himself up, brush himself off, and continue with business as usual – his ego bruised but his power very much intact. DM

Photo: Dancing with the stars – just one of many wickedly funny images that sprung up all over the web.