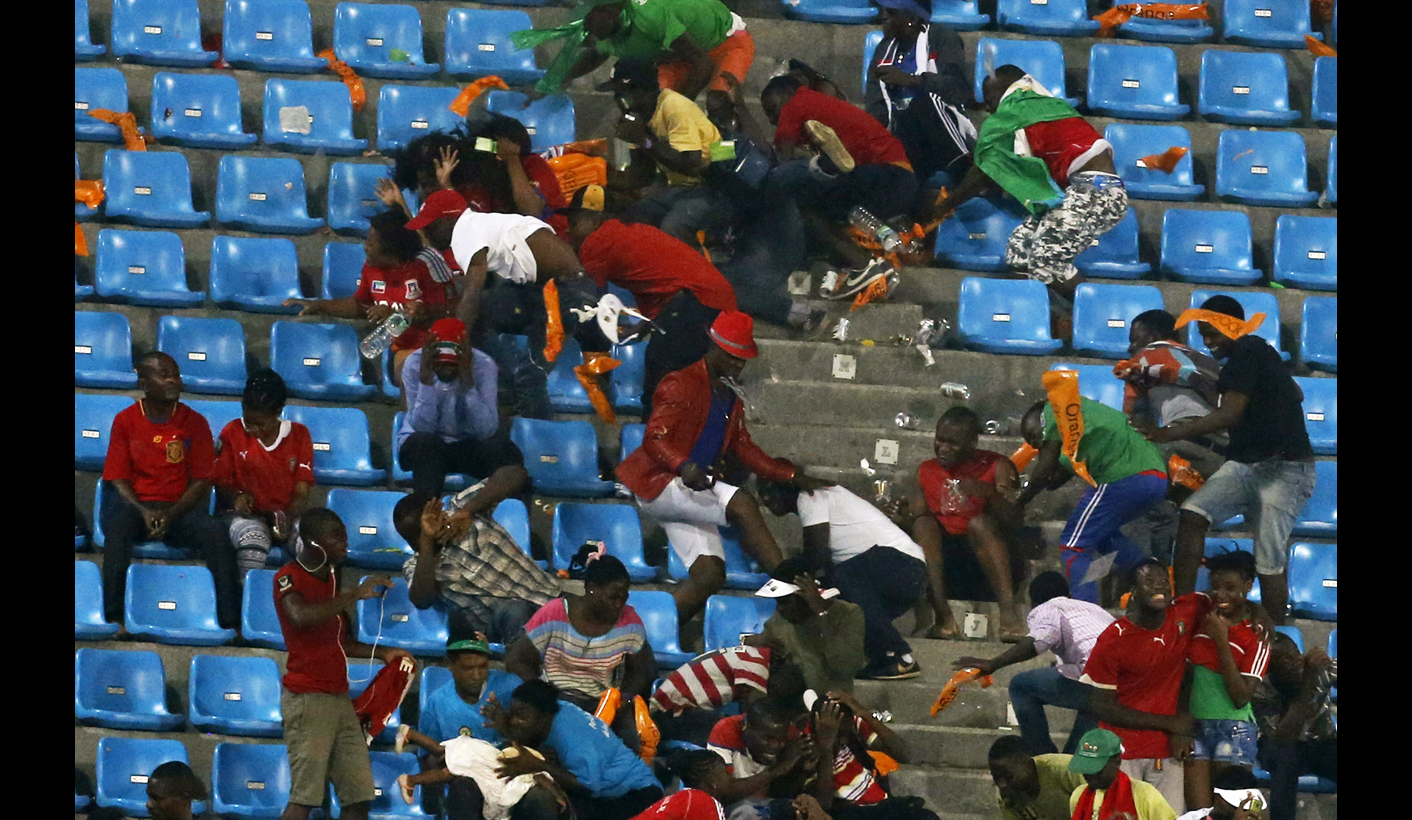 Ghana cruised into the final of the 2015 Africa Cup of Nations, with a 0-3 win over Equatorial Guinea. It’s the Black Stars’ ninth final, but their performance on the pitch is not what the match will be remembered for. Home fans disgraced themselves as they pelted Ghana players and fans with bottles and other objects – forcing the match to be halted for over half an hour. By ANTOINETTE MULLER.

Ghana booked their place in the final of the 2015 Africa Cup of Nations on Thursday night, when they beat Equatorial Guinea 3-0. Jordan Ayew, Wakaso Mubarak and Andrew Ayew all found the back of the net, sending the Black Stars into a final against Ivory Coast. It was a well-drilled effort from Ghana, but sadly this semi-final will not be remembered for what happened on the pitch. There was chaos in the stands, as Equatorial Guinea’s ability to provide adequate security was called into question yet again – and this is what will be in the headlines and footnotes regarding this match.

Ghana will now face neighbours Ivory Coast in the final on Sunday; the same country from whom they bought 80 megawatts of electricity in order to ensure the game could be watched countrywide. Things probably won’t be quite so cordial on the pitch on Sunday night, but Eskom could probably learn a thing or two from their West African brothers.

For now, it almost seems none of that matters. The night was tainted with disgraceful behaviour from fans at the grounds. Their ire seemed to be largely directed at the referee, who awarded a penalty for Ghana in the 42nd minute. As far as penalties go, it was pretty clear cut, but sports fans do not see things quite so clearly, and the home fans lashed out. At half-time, Ghana’s players had to be escorted off the pitch by riot police, who were shielding them as they were being pelted by objects from the crowd. The chaos carried on into the second half, where kick-off was delayed by a few seconds as various fan missiles – one which came in the form of a Spiderman figurine – were cleared off the pitch.

While the second half trickled on, the crowd continued to be rowdy as Equatorial Guinea fans resorted to throwing bottles, first in the stands and, eventually, at the Ghana fans. The Ghanaians had retreated to one corner of the stands in order to avoid the wrath. They had to be escorted out of the stands and to a spot next to the pitch, but that did not stop the onslaught. By the time they had made it to the side of the pitch, with riot police in tow, they were trapped – and the game was brought to a halt by the referee. The stoppage lasted over 35 minutes and by the time play resumed, only three minutes were added, despite the match stopping in the 82nd minute. The stoppage time was frustrating, with tear gas being let off and various objects still being thrown as the limited security tried to figure out what to do. At one stage, Eq. Guinea’s players begged their supporters to desist, but the athletics track around the pitch was already a sea of bottles and the fans had seemingly no interest in ending the chaos.

It was a rich reaction from fans of a team which should not even be in the tournament, due to their own penchant for cheating. Equatorial Guinea were booted out of qualification due to fielding an ineligible player, and only allowed back owing to actually hosting the tournament.

If CAF had any backbone whatsoever, there would only be one solution to this farce: EG should not be allowed to qualify for the next edition of the competition. Their fans were equally rowdy in the quarterfinal against Tunisia, although Tunisia didn’t exactly drape themselves in glory. The hosts were fined $5,000 for poor security at the stadium during that same match. The quarterfinals of the tournament also had to be moved because of the same fears.

It is a disgrace that the tournament has come to this at such a late stage. Eq. Guinea did well to step in as hosts when Morocco pulled out due to Ebola fears, but they clearly have concerns greater than the safety of fans. After security issues had already cropped up, why were opposition fans not catered for in a certain section of the crowd, and why was adequate security not provided to ensure their safety? Cynics will say that that the answer is simple: the safety of fans simply is not a priority. There might be some truth in that because the host nation has clearly not learnt from past mistakes.

That the match even continued is an astonishing feat, and whether the referee was under pressure from the suits who gathered on the sidelines, nobody will ever know. He had the authority to abandon the match and hand Ghana the win after the chaos erupted.

These are important questions CAF will have to answer and take responsibility for, all while they figure out how the country will cope with hosting a final at the same venue that descended into such chaos on Thursday night. DM

Photo: African Nations Cup semi-final as Ghana reached Sunday’s final with a 3-0 win over hosts Equatorial Guinea on Thursday in a match halted for 34 minutes late in the second half. REUTERS/Amr Abdallah Dalsh