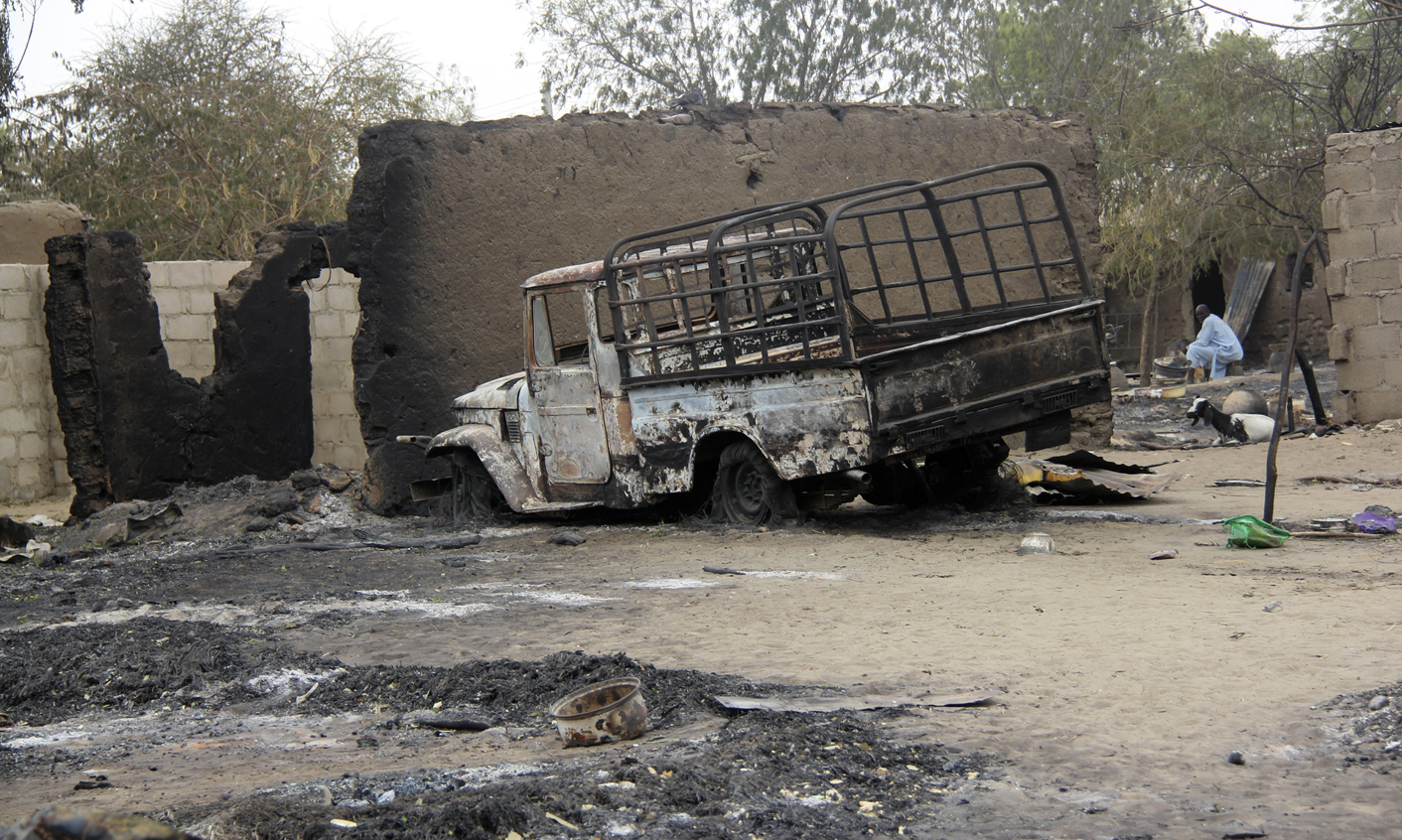 While the world catches up to the horrors of the massacre in Baga, Nigeria, GREG NICOLSON talks to those trying to salvage something from the ashes, including one of the Amnesty workers who said it might be the deadliest attack in Boko Haram's already violent history.

Daniel Eyre got the first report from Baga last Monday. On the shores of Lake Chad near the borders of Chad and Cameroon, the town sat just over six kilometres from a Nigerian military base. Amnesty International has been working in the north-eastern area of Nigeria for years, with more than six visits since 2012, and has many contacts in the area, says Eyre, the organisation’s country researcher.

The caller said hundreds had been killed by Boko Haram. Most military outposts in the region have been attacked recently and Baga has been raided by the militants before, including an incident in 2013 when the Nigerian military was accused of causing most of the 200 deaths. This time was worse, said local government officials and human rights activists fleeing the town. Eyre compiled the different accounts: who saw what on the different escape routes.

One source said Boko Haram were going from house to house dragging out men of fighting age and executing them in the street. Most of Baga fled, but an elderly man told Eyre that Boko Haram imprisoned those remaining. Eventually they were told, “Join us or leave.”

While it’s too early for conclusive figures, Amnesty International estimates that hundreds of people have been killed in Baga by Boko Haram, perhaps as many as 2,000, as the armed group attacked the town last week. “The attack on Baga and surrounding towns, looks as if it could be Boko Haram’s deadliest act in a catalogue of increasingly heinous attacks carried out by the group,” said Eyre in an Amnesty press release that’s caused shockwaves around the world.

In a statement, the Nigerian military said calling the Baga assault Boko Haram’s “deadliest” was “quite valid”. The military used the event to deflect criticism away from its own human rights record. “The attack on the town by the bloodhounds and their activities since 3 January 2015 should convince well-meaning people all over the world that Boko Haram is the evil all must collaborate to end, rather than vilifying those working to check them,” the statement continued.

A government spokesperson has been cited claiming the attacks on Baga and surrounding areas has led to 2,000 people displaced within Nigeria with another 2,000 fleeing to Chad. Figures from the United Nations, however, say at least 7,300 Nigerian refugees have arrived in Chad after fleeing the fighting.

Nwakpa On, head of communications for Nigerian Red Cross, says it is hard to estimate the number of displaced, as people are moving between refugee camps and leaving to stay with relatives. The Red Cross is providing humanitarian aid for those affected by fighting in the region. “Some of them actually lost everything: their livelihood, their accommodation, everything,” On told Daily Maverick over the phone from Nigeria. “The humanitarian need is very, very high and urgent,” said On. Last November, Red Cross launched an appeal to scale up operations in north-east Nigeria, heavily affected by Boko Haram, aiming to raise 450 million naira, about R30 million. It’s raised only 25 percent of that.

Witnesses have told harrowing stories of Boko Haram razing Baga. “They came, many hundreds of them, with guns, trucks and grenades,” resident Amosun told The Guardian. “They burned all the houses they could reach and set the military base on fire,” Kumsuri Gaborou told the publication. “We don’t know exactly how many lives are lost, but it was many. Some ran away into the bush and others drowned. The canoes were completely overloaded and turned upside down. I saw at least three boats of women and children all dead that way.”

Speaking to Nigeria’s Daily Trust, those displaced by the fighting told of walking up to 200 kilometres to find safety, still worrying about the fate of relatives. “Nobody was spared, unless [Boko Haram] did not spot you. Even people who found their way to the bushes were pursued and killed,” Baga government district head Alhaji Baba Abba Hassan told the publication.

Andrew Noakes, who has experience at Amnesty International and Save the Children and is coordinator of the Nigeria Security Network, a group of experts on insecurity in Nigeria, says it is too early to assess how many people were killed. “The area has been overrun and casualty counting is nearly impossible. Nonetheless, reports from survivors suggest the violence has been abnormally brutal, even by Boko Haram’s standards. The attack does not seem to have provoked a change in approach from the government or military,” Noakes told Daily Maverick on Monday.

He says one reason Baga may have been attacked in response to civilian vigilantes protecting themselves from Boko Haram. “Unfortunately, civilians feel they have no other choice than to rely on vigilantism,” Noakes explained. “The military is deployed in insufficient numbers to protect civilians across such a large area, and on a strategic level not enough emphasis is placed on civilian protection. Vigilantism may ultimately do more harm than good, as it provokes Boko Haram into attacks on civilians and the various militias may in time develop agendas that are detrimental to civilian protection. Nonetheless, until the army can fill the gap, it is unlikely vigilantism will disappear.”

Eyre said Nigeria’s government must find a way to protect citizens of northern Nigeria. “What’s clear is civilians are not being protected at the moment,” said the Amnesty worker. He added that war crimes and crimes against humanity had occurred in the region. United Nations Secretary Ban Ki-moon has said he is appalled by Boko Haram’s attacks.

On Sunday, two suspected child suicide bombers left 26 dead in a market in Nigeria’s Yobe state. This followed killings in the neighbouring Borno state on Saturday, where 16 people died as bombs strapped to a 10-year-old girl detonated in a popular market. It’s likely Boko Haram are behind both attacks. “These images from northern Nigeria should be searing the conscience of the world. Some 2,000 innocent children, women and elderly reportedly massacred in Baga. A young girl sent to her death with a bomb strapped to her chest in Maiduguri. And lest we forget, more than two hundred girls stolen from their families, still lost,” said UNICEF executive director Anthony Lake in a statement on Sunday.

According to reports, both air and ground Nigerian forces are fighting to regain Baga, but the military has struggled since Boko Haram has led attacks on civilians since 2009. The fighting has led to an estimated exodus of 135,000 people from Nigeria and the displacement of 850,000 within the country. It’s reported that around 10,000 people died in the fighting in 2014 alone.

As Nigerian President Goodluck Jonathan has shown an inability and unwillingness to deal with the issue, South African Department of International Relations and Cooperation spokesperson Clayson Monyela has suggested to Eyewitness News that South Africa might be available to help combat Boko Haram or take part in an expanded military intervention. “We can’t sit by and just watch people being slaughtered in this manner. We are calling on the international community to rally behind Nigeria,” said Monyela.

Noakes, however, said combating Boko Haram would require negotiation. “In the long term, the best way to end an insurgency is through a negotiation,” he emailed from London. “But Boko Haram has little incentive to negotiate at the moment, given its success on the ground. Taking back the initiative will be the first step towards negotiation, then making an adequate offer that addresses the underlying drivers of the conflict, including human rights violations and under-development, will be the next. A multi-national force should be a last-resort option. The north-east of Nigeria has a long and proud history of resistance to foreign influence, and large-scale, overt intervention from outside may make things worse rather than better. That said, assistance with things like training would be useful.” DM

Photo: Baga in 2013 – A vehicle used by Islamist militants is pictured damaged after what Nigerian authorities said was heavy fighting between security forces and the militants in Baga, a fishing town on the shores of Lake Chad, adjacent to the Chadian border, April 21, 2013. REUTERS/Stringer