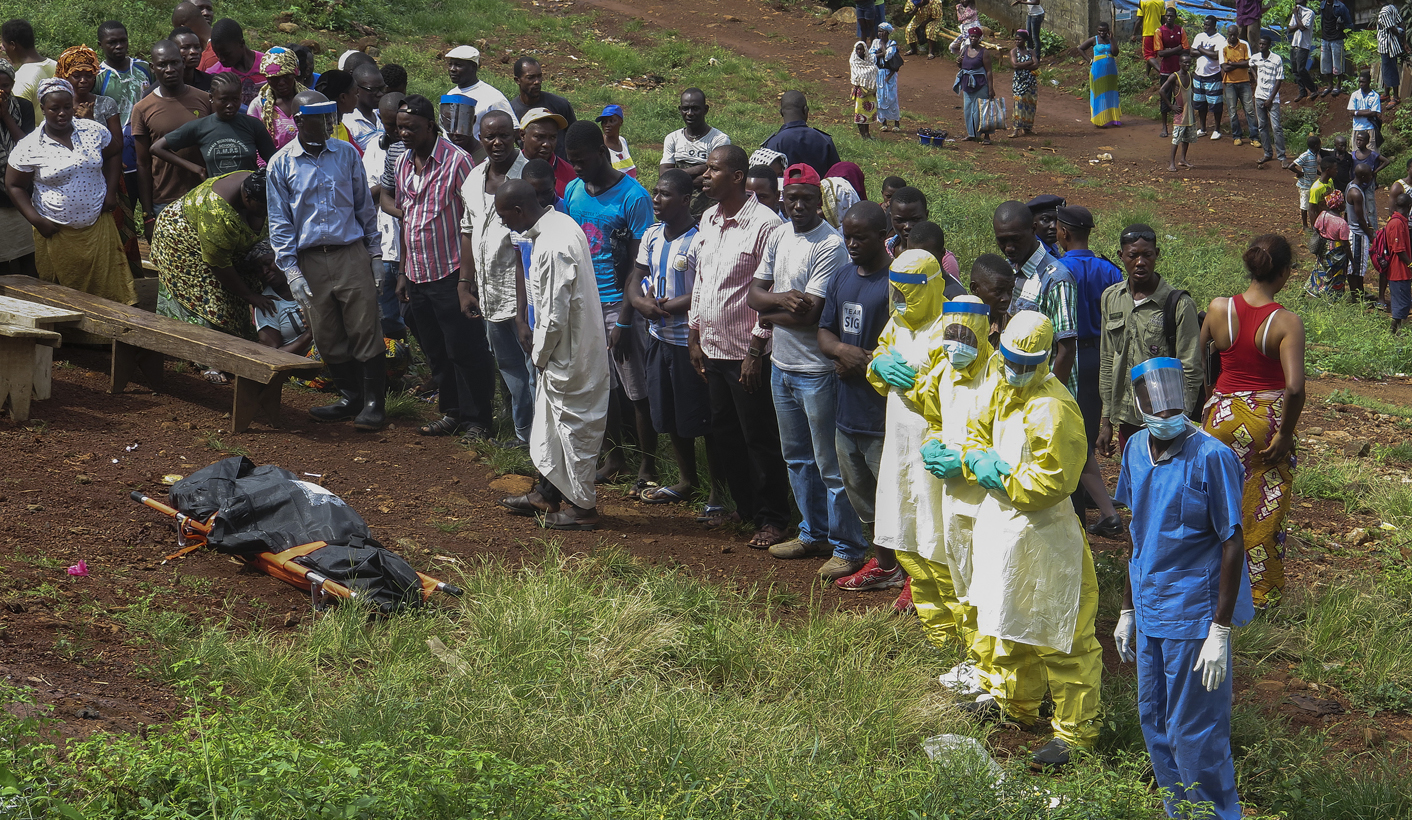 The health care workers who put their lives at risk to fight Ebola should be honoured, not quarantined. KATHRYN STINSON, who recently returned from Sierra Leone, experiences fear, loathing and hysteria from friends, colleagues and fellow parents… and is plagued with a need to keep washing her hands. By GROUNDUP.

Kaci Hickox became an international name overnight when she returned to the United States from her mission as a nurse in Sierra Leone at the end of October 2014. She was quarantined at Newark Liberty International Airport, despite displaying no symptoms of Ebola. Then she was put in a tent outside a New Jersey hospital, despite still not having any symptoms of Ebola. She was quarantined because she was returning from Sierra Leone, and because she was a health worker.

As it happened, I travelled from Freetown with Kaci and some others to Europe before we went our separate ways. We were both apprehensive about the reception back home, but neither of us could have imagined how our respective circumstances would unfold.

From the time we entered the departures terminal at Freetown airport we were treated differently. Our luggage was searched, including that which was to go in the hold. We were told that the baggage handlers at our destination refused to touch our luggage and a private company had been hired to offload it onto the carousel in arrivals. They agreed to this on the condition that all liquids over 100ml from checked baggage were removed.

Out came many bottles of toiletries, including perfume and shampoo, amid great protest. It was difficult to leave my large canister of chlorhexidine hand scrub with security, but this was the beginning of returning to a non-Ebola context, and leaving the habitual fear of contagion behind. After completing and signing a health questionnaire, our temperatures were taken on three separate occasions, the final time upon boarding, where the result was written on our boarding cards.

Symbolically, I left my pair of mud-coated hiking boots, which had been on several African ventures before Sierra Leone, at a refuse bin at the departure gate, and put on another pair of shoes before heading to the landing strip. On entering the cabin, we saw that the flight crew had put on masks and gloves.

In Brussels, the return to an essentially Ebola-free environment was challenging. After a month of no physical contact and being faced with abject poverty every day, the crowded European train stations were oppressive, and the previous allure of merchandise in brightly lit department store windows now seemed pointless. The world had not changed, but something in me had.

At my mission debriefing, people grabbed my hands, encasing them in their own, and wrapped me welcoming embraces. Later I was told that this was to help me feel comfortable about physical touch again.

I kept on needing to wash my hands.

Those about to depart for the field looked on with respect and they asked me questions about the terrain and the epidemic situation. I felt like a veteran, an exhausted, returned and valued hero.

“Expect mixed reactions from people when you return home,” they said. “Remember that you are the one who is bringing something into the room, something that makes them experience fear and discomfort, given where you have been. Don’t take it personally.” I took mental note.

Three weeks ago, I arrived back in South Africa, and I’ve completed 21 days post-mission.

The protocol for a returning non-clinical worker includes monitoring one’s body temperature twice per day, and emailing the result to the national department of health daily. Self-monitoring was key. I was aware of my health status at any point, and the simple cold I contracted from my toddler induced a fair amount of panic, despite no evidence of fever, muscle weakness or other Ebola-like symptoms.

During this time, it is imperative not to become ill with fever or other Ebola symptoms because this would immediately require quarantine in a medical isolation unit until Ebola was ruled out. Were any symptoms to arise, Médecins Sans Frontières (MSF) would work immediately with the South African National Institute of Communicable Diseases along specific protocols to diagnose and isolate.

Without symptoms of the disease, family and friends could be reassured that I was not contagious, and did not pose any risk of infection. Self-quarantine and isolation are neither warranted nor recommended.

Despite these clear protocols, the handful of cases in Europe and the United States has sparked a hysterical response that has occasionally turned into paranoia. Twitter hashtags #Ebolanoia and #Fearbola provide ongoing reports of quarantine madness and scaremongering around toilets (and coffee cups on aeroplanes). A teacher resigned on being forced to take leave after returning to the US from Ebola-free Kenya and Rwandan children in New Jersey were asked by parents of other children to be kept at home.

The entire African continent has been associated with the disease, and tourism is said to be on a downturn, showing a woeful knowledge of geography. Thirty states in the US have sought Ebola assistance from the US Centres for Disease Control and Prevention, despite fewer than five cases so far in that country, a thousand times less than those who have died in West Africa to date.

For people like me returning from an Ebola-affected area, the risk of infection although very low, could not be zero, and could only be eliminated after 21 days. It was an interesting and difficult time.

While my family welcomed me back unconditionally, I received mixed reactions from some close friends. Some saw no issue with my exposure risk; some asked if they could embrace me before doing so. Others tried to consciously work through the fear: “How sure can you be that you won’t infect me?”

Still others avoided me. I was requested not to attend a party “to protect the guests”. At a school function, parents visibly shifted away from me. Going back to work became fraught, with reports of an “undercurrent of hysteria”. “We don’t know what to do with you”, “What about fomites [a medical term for doors, handles and surfaces that can carry germs]?” I stayed away and waited. I was asked to maintain “discreet social distancing”. So I kept to myself. I felt that the purpose and spirit of my undertaking in Sierra Leone had been misunderstood.

My son, returning from school in tears one day, reported that the child of a doctor had asked him, “What if your mother’s temperature rises by two degrees and she hugs you before she measures it?” The implication that I could not be trusted to monitor or know myself, or to follow established protocols, and that I would be irresponsible or selfish enough to put my own family and everyone else at risk was simply jaw-dropping.

We should be honouring, not quarantining, health care workers who put their lives at risk not only to save people suffering from Ebola in West Africa but also to help achieve source control, bringing the world closer to stopping the spread of this killer epidemic. (Drazen et al., New England Journal of Medicine)

Ebola has a fear factor that plays right into the hands of the media and the public because of the goriness of its symptoms and the rapid and near certain route to death. The hazmat suit and the masks distort the wearer’s voice, stripping him or her of an identity as a caring and generous volunteer.

In the hysteria and paranoia it is all too easy to forget that it is through body fluids of an infected symptomatic person that this disease is transmitted.

I have confidence in the South African health system to protect us from Ebola.

The hysteria and stigma surrounding returning staff from Ebola-affected areas needs to be countered with more science and evidence-based insight. We have done this successfully before, with HIV/Aids. Shouldn’t we know better by now? As Jacques Rousseau says, “Pandering to fear is not the solution to Ebola.”

And amid all of this, isn’t it time to ask the more difficult, political, questions: what are we doing to curb the scourge of our own infectious diseases of poverty, such as TB? DM

The views expressed in this opinion piece are those of the author. No inference should be made as to whether GroundUp endorses or opposes these views.