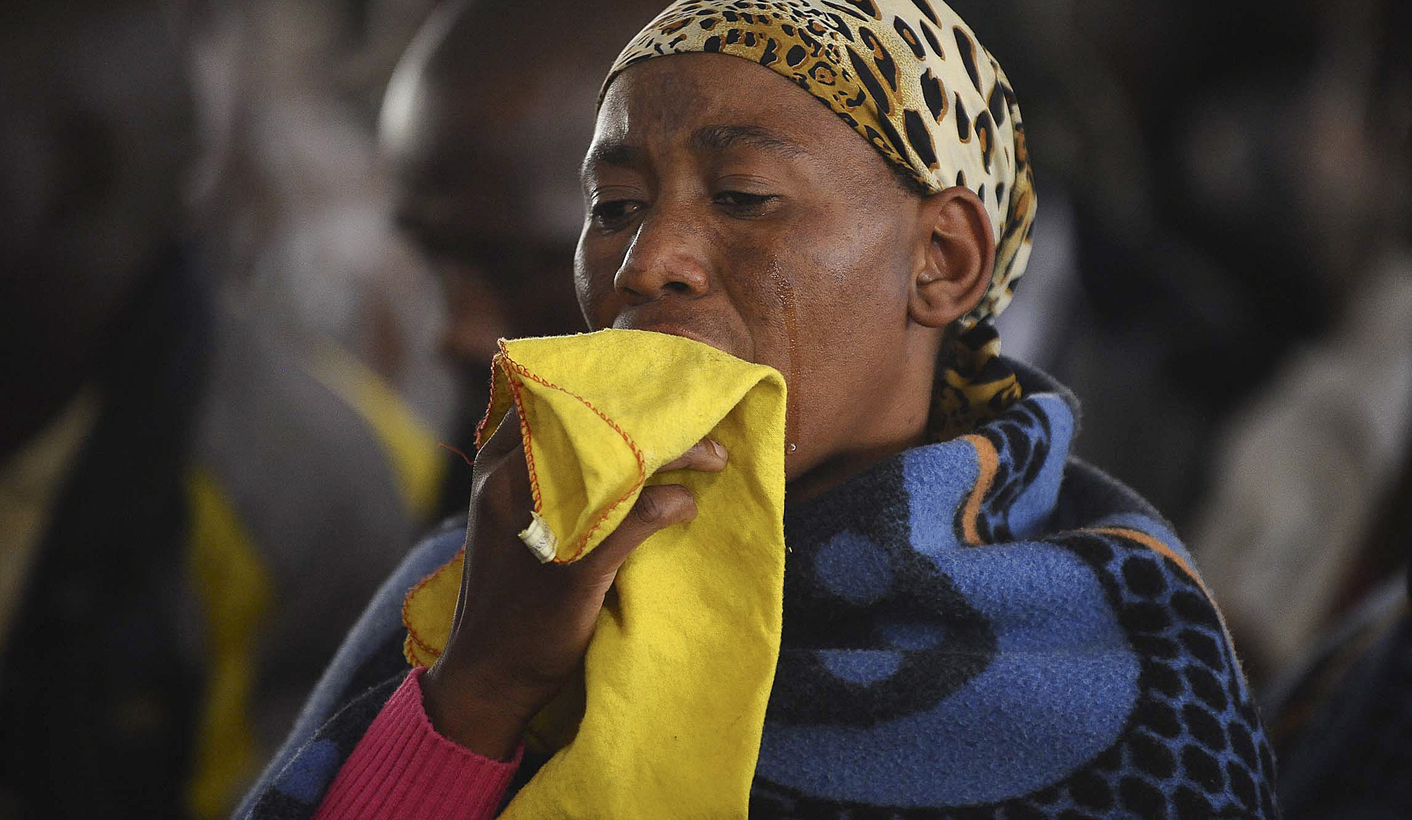 During closing arguments at the Farlam Commission, legal teams have focused on who is responsible for the deaths. But during the course of the inquiry, relatives of the deceased have not only been struggling with the trauma of losing a loved one but also the poverty of losing a breadwinner. It's time they're compensated. By GREG NICOLSON.

Mandla Yawa wants a job. But not in mining. The 23-year-old from Cala in the Eastern Cape finishes his degree in agriculture and animal science at Fort Hare this year. As the second-born child, with his younger siblings in high school, he has duty to help his family.

“It was very, very hard financial wise,” Mandla says of the last two years. His older brother and the family’s breadwinner, Cebisile Yawa, was killed by police in Marikana on 16 August 2012, bullets in the back and buttock.

During closing arguments at the Farlam commission of inquiry into the deaths of miners at Marikana, a number of legal teams have said police must be found responsible for the massacre. It would be a travesty of justice if all were exonerated. Another concern for those still living is survival. The Marikana victims supported their immediate families and extended families. Cebisile Yawa supported his daughter, five siblings and his parents.

With hearings at the Commission ending today, relatives of those killed are looking for justice, and this includes financial compensation.

Grace Gomba works as a family liaison for the Socio-Economic Rights Institute (Seri) for relatives attending the Commission. At the inquiry, relatives stay in hotels, but after losing their source of income the families of Marikana are struggling at home. “One may think that they’re living a cosy lifestyle and it’s fun, but I can tell you it’s not true,” says Gomba. While they are at the Commission relatives are unable to be with their children, their gardens or livestock. When they return home, their children don’t expect them to come empty handed.

It’s no secret, Gombo says, the relatives of the deceased want financial help to survive.

Zameka Nungu’s husband Jackson Lehupa was shot 11 times by police. “It was hard. It still is. No one is working,” she said at the Commission on Thursday. Nungu, from Mount Fletcher in the Eastern Cape, survives on a grant from the South African Social Security Agency (Sassa). Like most of the other relatives of the mineworkers, she received money from her husband’s provident fund, and once-off donations from the National Union of Metalworkers SA (R8,500) and the Association of Mineworkers and Construction Union (R12,500 split over two payments, with the latter still coming).

That money is gone, with just the grant left. “The deceased have to be paid and the police should be arrested and we want the truth to come out,” says 41-year-old Nungu, who has six children aged between seven and 21-years-old.

Next to her, Ntombizolile Mosebetsane, 39, from Lusikisiki, also survives on Sassa’s R300 monthly grant for each of her six children. “No money. I’ve been struggling. It’s been very hard. There’s nothing at home,” she says. Her husband Thabiso was the only person in the family working before he was killed. In August, she told the Commission how hard it is to provide for her children. “I can’t even afford to buy a doll for the child but some people can afford to pay R18 million for a buffalo. My husband was [a] hard worker and died seeking a better wage.”

After the killings, Lonmin offered some assistance but the relatives say it has not been enough. The company is paying for the education of the dependent children of the deceased up to university level. It paid for the final years of Mandla Yawa’s degree and Mosebetsane and Nungu’s children are now in boarding school. But relatives say the company is not paying for dependants that are not immediate family members. Lonmin also promised that the families would not go hungry, say the relatives, but the company has only delivered two food parcels to each.

Even this support hasn’t been provided to everybody. The wife of Thabiso Thelejane didn’t receive help from Lonmin because her husband was a contract worker; relatives of Thembinkosi Gwelani and Thobile Mpumza aren’t receiving support because they were looking for work at Lonmin when they were killed.

As compensation, the company has also said relatives can take over the jobs of their loved ones. Mosebetsane and Nungu are both in training. “I’m not happy about it, but I’m being forced because there’s nothing else,” says Mosebetsane. Relatives say this process has taken too long and they haven’t yet received a first pay cheque.

“Lonmin has delayed unduly in upholding its undertaking to ensure that one family member per family is given employment at Lonmin. It must honour its undertaking in this regard without any further delay,” said the families’ heads of argument submitted to the Commission, one of a number of teams to speak on compensation. Seri, on behalf of the families, also called for Lonmin to assist the families with home renovations interrupted by the death of loved ones.

Acting on behalf of the family of John Ledingoane and the Benchmarks Foundation, the Legal Resources Centre has also recommended compensation. “The state must acknowledge civil liability for the loss suffered by dependants of those killed by members of the SAPS at Marikana on 16 August 2012 and those who were injured and must compensate them for the loss in accordance with ordinary principles of civil liability,” the legal team submitted. “A separate board or mechanism must be established to determine the amount of the loss for which the state is liable in each case in an expedited process.” It recommended Lonmin and the SAPS jointly and severally provide compensation.

For the injured and arrested workers, Dali Mpofu says civil claims are already under way but those cases could be determined by the Commission’s position on compensation.

In their recommendations, the evidence leaders explain the need for compensation. They argue it can repair some of the damage, restore community and avoid endless litigation after a two year inquiry. “The process has been painful and exhausting. If the matter now had to be reinvestigated in civil trials, this would re-open the wounds and cause further pain […] We therefore submit that the Commission should recommend that, having regard to all of the circumstances which it will no doubt address in its report, the SAPS should pay compensation to the dependants of those who were killed in the police action, and to those who were injured.” They argue compensation must be given to the strikers killed and those the strikers killed.

The South African Human Rights Commission (SAHRC) has also suggested the Commission recommend compensation for the relatives of all those who died, those who were injured, and those who were arrested and allegedly tortured after arrest. “SAHRC respectfully submits that, in the circumstances, liability should not be the driving factor. We submit that the Commission should recommend to the president that funds be made available immediately to all three categories of individuals.” According to the SAHRC, the families of those killed should receive the most compensation.

While there is little talk of how much compensation should be recommended, Tshepiso Ramphele, acting for the two killed Lonmin security guards, mentioned R200,000 this week and accused Lonmin of weighing up the cost of life versus the cost of stopping production, and choosing to continue operations.

The Marikana Massacre didn’t just leave a trail of dead bodies. Loved ones were never seen again. Parents, children, brothers, sisters, cousins, nephews and nieces lost their means to survive. While relatives have had to relive the trauma over a two-year inquiry, home renovations are unfinished, children’s clothes not bought, and food scarce. The Commission must identify those responsible; it must also try to alleviate the poverty caused when sole providers are killed. DM

Photo: A relative weeps during the memorial service held in honour of Lonmin mineworkers who were killed by Police in Marikana, near Rustenburg, South Africa 23 August 2012. EPA/STR