Marikana: Phiyega ‘not fit for office’ 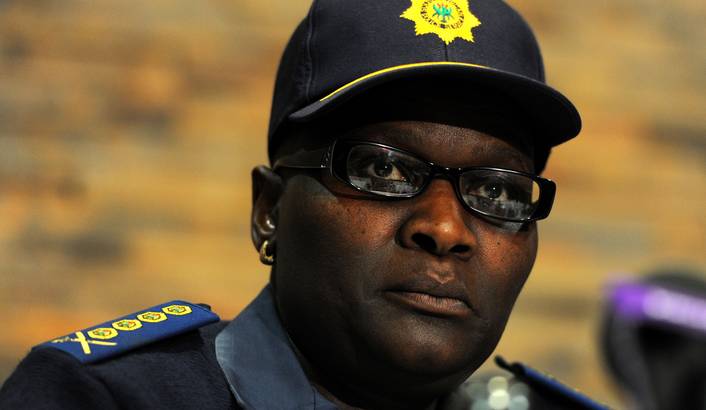 Riah Phiyega is not fit to hold the office of National Commissioner of Police, say the Marikana Commission’s evidence leaders. By Alide Dasnois for GROUNDUP.

The evidence leaders are the legal team that has a central role in the gathering and presentation of evidence. They do not represent any interested party.

In their Heads of Argument, which will be presented to retired Judge Ian Farlam today, Geoff Budlender, Matthew Chaskalson, Kameshni Pillay, Charles Wesley, Tantaswa Lupuwana and Matthews Mojapelo argue that both Phiyega and North West Provincial Commissioner Luzuko Mbombo were motivated “at least in part” by “illegitimate and improper political motives” in their handling of the strikes at Lonmin platinum mines in August 2012, in which 34 strikers died at the hands of the police.

All these motives were “the consequence of an improper politicisation of the SAPS at very senior level,” the evidence leaders write. “South Africa has a history of the politicisation of policing. We have experience of its consequences. We submit that it is of the greatest importance that this should not be repeated in the democratic era.”

They say that one of the purposes of the police action on 16 August was to end the strike at Lonmin, where rockdrillers were demanding R12,500 a month. “That was an entirely impermissible and illegitimate purpose. The SAPS should not be used to break strikes, whether protected or unprotected.”

The evidence leaders also point to “concerted attempts to mislead the Commission” by SAPS, some of them designed to protect the National Commissioner and senior officers; a “lack of candour” and “false evidence” given by Phiyega to the Commission; and a press statement “designed to conceal the facts”.

“Her immediate response to the shootings was incompatible with the office of the Head of a police service in a constitutional state,” the Heads of Argument say.

The 693-page report, prepared after two years of “painful and exhausting” hearings, also recommends that the Independent Police Investigations Directorate (IPID) should be invited to investigate whether Mbombo should be held criminally liable for the deaths of the 34 miners on 16 August 2012, and whether other officers should also be held liable for some of the deaths.

Among others they single out Major General Ganasen Naidoo who failed to bring paramedics to the scene of the shootings in time, while at least one of the injured strikers bled to death.

SAPS members who gave false evidence should be the subject of disciplinary proceedings, the evidence leaders say, and IPID should investigate the “concerted attempt” by SAPS to mislead the Commission, with a view to prosecution.

The report also recommends the urgent demilitarisation of the police.

The Minister of Police and the National Commissioner should be required to state publicly, within a specified time, when the police ranks will be demilitarised, what further steps will be taken to demilitarise the police, and when each step will be taken, the evidence leaders say.

They also call for the prosecution of all strikers who can be identified displaying dangerous weapons at gatherings or marches during the week of 9 to 16 August 2012.

Regarding the possible liability of Lonmin, they note that Lonmin was aware of the risk to employees of not closing the mine after the murder of two security officers by strikers, but took a “business decision” not to close the mine because of the costs involved.

This decision should be investigated by the SAPS and the National Directorate of Public Prosecutions, the evidence leaders say.

They recommend that the state should compensate the dependants of all of those who lost their lives –at the hands of the police or the strikers– and all those who were injured at Marikana.

They also recommend a “heritage project” which should be more than a formal memorial: “It must be the result of a process which brings people together to decide, jointly, what heritage project should be undertaken, and how this should be done. If the parties affected are able to come together to reach agreement on a project aimed at memorialising what has happened, that would be a very important step in achieving the goals of truth, restoration and justice.” DM