The killing of Anni: A courtroom artist helps to see justice done 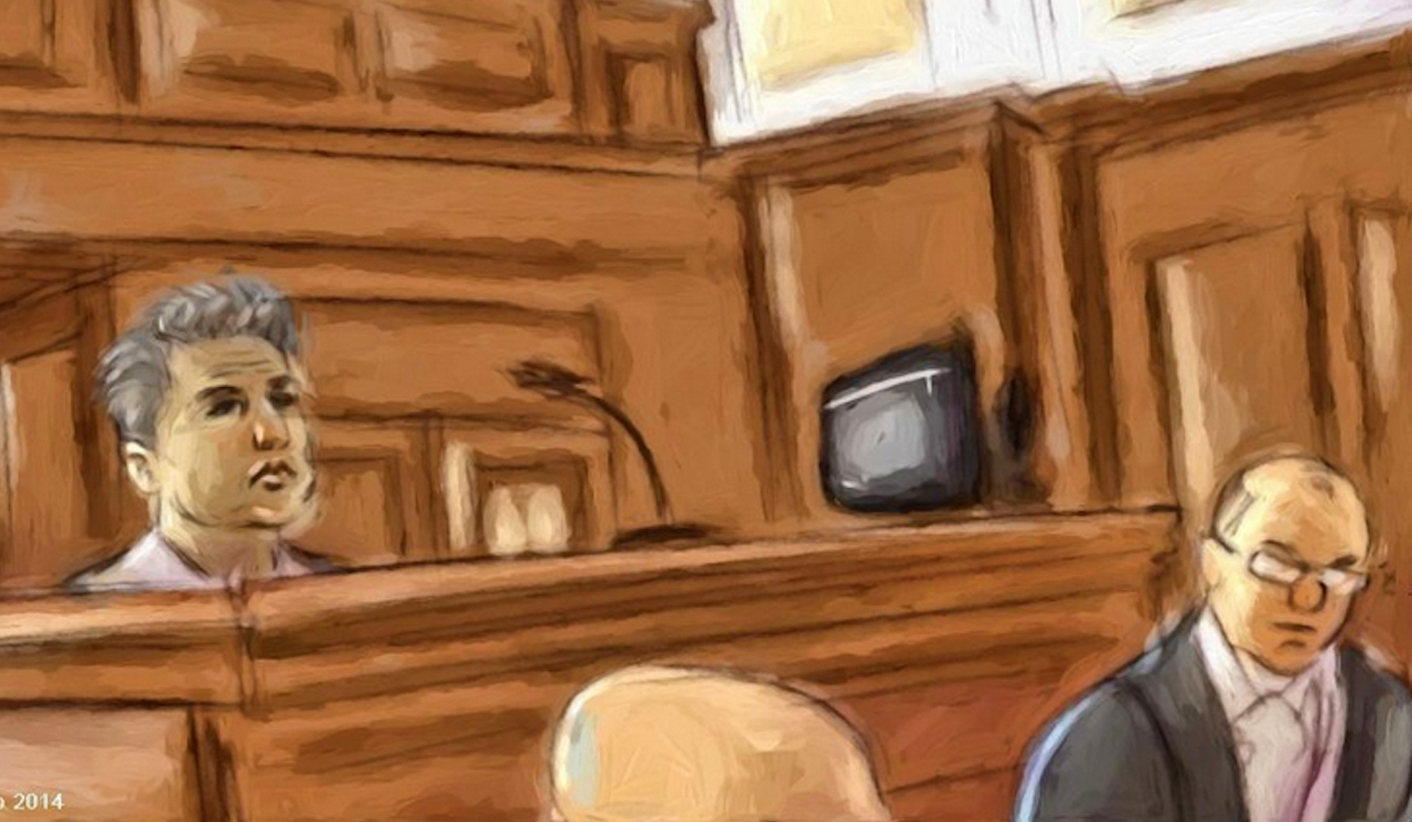 Unlike the Oscar Pistorius hearing, cameras have been barred from recording the Shrien Dewani murder trial currently being heard in the Cape High Court. The only visual link to what is going on inside the courtroom is being captured by Cape Town artist Pete Woodbridge, who is keeping alive an old tradition in the electronic age. By MARIANNE THAMM.

Without the ubiquitous 21st Century intrusion of cameras and recording equipment in the courtroom, the greater public is not witnessing the subtleties, nuances or some of the lighter moments unfolding in the dramatic Shrien Dewani murder trial in Cape Town.

Those outside of the courtroom following the trial have to rely on tweets; the written reports of journalists who have a ringside seat, or must catch up later through a retelling of the day’s events by TV journalists reporting from outside the building.

There are many undercurrents and tensions inside the courtroom. Moments when the accused quietly sits in the dock and weeps, occasions when his counsel, Advocate Francois van Zyl, prepares to unsettle a witness, circling his or her testimony like a bird of prey coming in to pounce.

In a flash, Deputy Judge President Jeanette Traverso can cast her blowtorch gaze across the courtroom when a sound distracts or irritates her. These gestures can momentarily reveal much about the inner life or thoughts of each player in the wood-panelled courtroom.

This week two relatively minor witnesses provided a diversion from the main evidence being presented in the trial. One witness, Maria Bravetti, owner of Golden Touch Jewellers, where Dewani had gone to change currency, could have been an extra in a Pedro Almodóvar film.

Bravetti, with her distinctive sharp features and cascading grey hair, slipped into the witness box like a reclusive European film star. Hers is a perfect face to caricature. So too the avuncular warrant officer George Leon Stephanus, the first cop to take a formal statement from Dewani soon after the hijacking on 13 November 2012.

Stephanus, who admitted that he had lost the pocket book in which he had recorded the incident, was a confident and garrulous witness who often inserted himself in the testimony. At one point, visibly irritated by Van Zyl’s relentless haranguing, Stephanus asked the advocate to repeat a question. Van Zyl did, to which Stephanus quipped, “Thank you for speaking up”.

When Van Zyl quizzed him as to why he had not asked Dewani to take the oath after taking down the statement that night, the policeman retorted, “Where was God that night?” sending a ripple of laughter through the courtroom.

Sitting only a few metres away from these witnesses and wedged between journalists on the media bench is Cape Town artist and comic illustrator, Pete Woodbridge, quietly sketching away on his tablet. Woodbridge has been commissioned by the BBC to capture the visuals inside the courtroom and has been there since the start.

Courtroom sketches seem somehow quaintly old-fashioned. One could argue that an image is an image is an image, whether captured through the lens of a camera or through the eye and hand of the artist. Perhaps one might be able to argue that a drawing is as much of a rendering as a photograph, just without the whirring soundtrack of the shutter. It seems stubbornly prejudicial to allow one but not the other. However, there is much more to courtroom sketching than just capturing a likeness.

Perhaps an artist has been allowed in this instance because his or her presence is regarded as more discreet or genteel, more dignified and respectful than the jostling photographers who shove their lenses into personal space.

It is the first time that Woodbridge, who is also a musician and has worked with the Super Striker comic series, has been asked to render courtroom sketches.

“I have sketched live music and football so I have confidence with my skill in drawing. I can draw quickly. But every time I draw, it feels like a challenge. At first I didn’t know what to expect so I went to another court, got a photo reference. But at first it was a very alien space to me.”

Because journalists are distracted, listening intently to testimony and writing frantically – either in our notebooks or our laptops – we sometimes miss small but significant details.

For Woodbridge observation is a key to capturing the essence of each character.

For example, the artist has noticed that the burly and white-haired Van Zyl has particular mannerisms or tics that manifest as he prepares to cross-examine a witness.

“He does this thing with his eyebrows and he also frowns. Then he leans forward on the desk as if to assert his authority,” observes Woodbridge.

The difference between Woodbridge’s sketches and a photograph is the layering he brings to the visual.

“There is the human touch and filter there. The artist is the filter of what is going on in our own mind. You are looking through a window I am giving you. A photograph captures a moment whereas a drawing is more interpretive.”

Woodbridge has the advantage of being able to scrutinise and take in everyone in the courtroom including the media as well as the accused, Shrien Dewani.

“He’s watching everyone all the time. So is his brother. At the start of the trial he seemed very edgy, his eyes were quite startled and wide. He has interesting features, his nose, his lips and his greying hair.”

Woodbridge says he finds Western Cape Deputy Judge President Jeanette Traverso amusing when she sweeps in and out of court in her red robe.

“She looks a bit like a comic action figure.”

Woodbridge says he generally does not know what he is going to sketch beforehand.

“I grab a few moments and draw them quickly. I usually make three quick sketches. Sometimes it is just an idea. When I return to my office I deal with the technical stuff, the colour, the shading and firming up lines. The magic happens later.”

Ultimately, he says, it is about capturing the right mood. Woodbridge sketches with two electronic pens, one more sensitive than the other on a tablet. The programme he uses is Sketchbook Pro and Autodesk.

There have been moments that the artist has found unsettling in court, particularly the laughter elicited by Warrant Officer Stephanus’ comment about god.

“I found that strange.”

Through this commission by the BBC Woodbridge has joined a long tradition of courtroom artists, a skill that is nearing extinction as trials across the world – particularly those regarded as high-profile – begin to open up to television cameras and live broadcasts.

Next week the state will call more witnesses and it is expected that the “German Master”, Leopold Leisser, will testify. Pete Woodbridge will be back in his spot, up close and personal, ready to capture the one witness the international media has been waiting for. DM