Pistorius Trial: The arrogance, the privilege, the farce, the insult 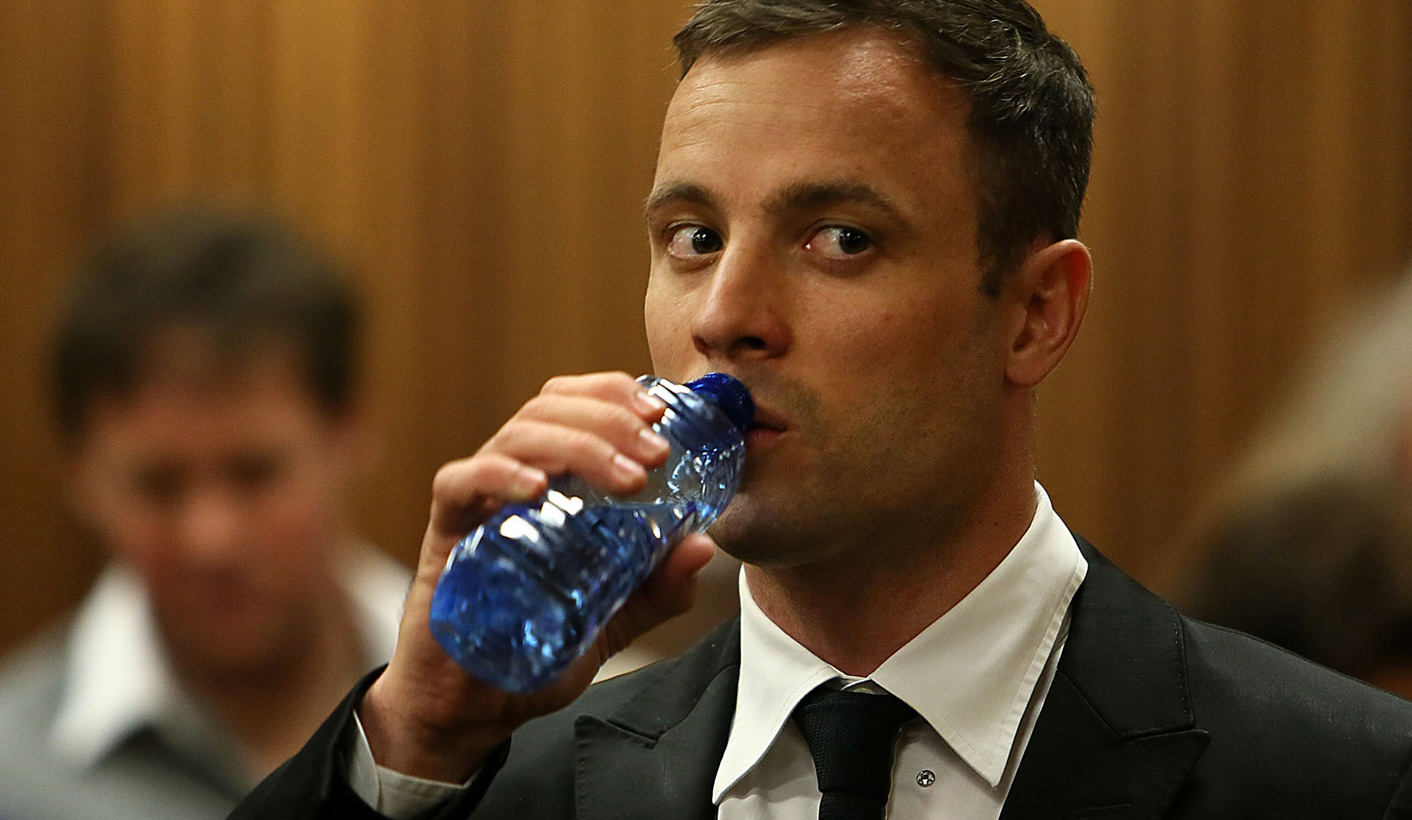 On Thursday afternoon, after the Oscar Pistorius trial adjourned in the North Gauteng High Court, the athlete’s brother Carl Pistorius tweeted “If you lie with dogs, you get fleas – Anon”. That could possibly explain the prickly, itching sensation South Africa feels after being exposed to the Oscar Pistorius contagion for 18 months, through 47 court days. All of it, the drama, the tragedy, the showmanship, his spectacular fall from grace, the gallantry of carrying and crying over a bloodied corpse, the fake devastation, showed how he is better than the rest of us. The conclusion of the sentencing procedure is probably not the last we will hear of and see our champ as an appeals process is sure to ensue. He will continue to contaminate and assault the national consciousness with his charmed existence. By RANJENI MUNUSAMY.

You’ve got to hand it to Oscar’s Pistorius’ legal team for coming up with four people willing to take the oath and stand in court to testify how the convicted athlete was a truly special human being who did not deserve to go to prison. Dr Lore Hartzenburg, who has been counselling Pistorius since he shot and killed Reeva Steenkamp in February 2013, told the court what an awful time he has been having, crying, vomiting and being tormented by the media.

“We are left with a broken man who has lost everything,” she said. And apparently this professional counsellor even cried in court when Pistorius had to take off his prosthesis during a demonstration. Hartzenberg said Pistorius had told her he would like to work at his uncle Arnold’s school in Mozambique, helping children. Perhaps he’d get time to sip cocktails at Bazaruto while he’s there, who knows.

Do the children have a choice in deciding whether a convicted killer should be foisted on them, or like everything else, does Pistorius’ sense of entitlement allow him to go to the rescue of black African waifs?

Hartzenberg pities his woeful state and felt that his ability to grieve had been hampered by negative media reports. He has suffered enough, and the big bad media should leave him alone. After killing someone.

There really aren’t enough expletives in the world to respond to this amount of bullshit.

But incredibly, the sentencing hearing rolled downhill from there. A social worker in the Department of Correctional Services, Joel Maringa, was trotted out next. He recommended a three-year sentence of correctional supervision, with two eight-hour days of cleaning work a month. For killing someone.

Why? Because of the trauma he has suffered. Because of his disability. And because he could still play a productive role in society. According to Maringa, being placed under house arrest is not a lighter sentence. Perhaps. If he were staying in a shack in Alexandra township where giants rats run the hood and eat parts of babies, that is. His uncle’s three-story Waterkloof mansion, however, might be a tad more luxurious than the average prison cell that every other South African citizen would be frog-marched into if they killed someone. But, you see, Pistorius “should not be destroyed”, according to Maringa, and needs to be integrated back into society.

Do the rest of us who also live in this society have a say in this? Not according to social worker and probation officer Annette Vergeer. She said public opinion should not be a factor in deciding Pistorius’ sentence. Of course not. Why should us lesser mortals have a say in whether a badly behaved, spoilt rich boy drowning in self pity should live among us? After he killed someone.

Prisons are overcrowded, dirty places that do not have railings for disabled people and also, Pistorius might see people having sex there. So it’s like the average nightclub, then, which Pistorius is known to frequent, and brag about owning the president. Perhaps he could use the same line in prison and have people genuflect before him in awe.

But justice does not matter when you consider all that Pistorius has done for humanity. His charity work, which helped build his profile and bank balance, and swanning around with the rich and famous really made the planet a better place. Next to beauty pageant contestants campaigning for world peace, Pistorius is the true salt of the earth. His efforts to improve the lot of others mitigates against all his thuggish behaviour and we should be thankful. When you consider this, the small matter of him having killed someone really shouldn’t inconvenience him.

So what has burnt at the altar of keeping Pistorius out of prison? His previous efforts to get disabled people to compete with able-bodied athletes. Now they should be seen as weak, fragile and vulnerable – to hell with the hypocrisy. The correctional services system is not worthy to accommodate someone of his stature and position in society. They are for lesser human beings, like the 160,000 already in jail and the 51 million of us who could land there if we killed someone.

And of course there’s Reeva Steenkamp’s life, and the pain and suffering endured by her family. Nothing R6,000 a month couldn’t settle.

Let’s get something straight. Oscar Pistorius is no hapless hero that a barbaric society is trying to punish because of our bloodlust or savagery. He is no tragic figure like Tom Robinson in To Kill a Mockingbird. We need not pity him or cry for him. He is quite the opposite. He fought against his disability and triumphed, and then he became convinced he was superior to the rest of us. He basked in his privilege, defined by his race and his class.

He projected himself as a figure of moral virtue, while firing guns in public places, and asked others to lie for him about it. He abused his friends, abused the court system and abused our tolerance. He thrived on his megalomania and believes now that the world wronged him, rather than that taking a human life comes with consequences.

He was our superstar, our gold medallist, our flag-bearer, our champion.

He is not anymore.

There is no cheering him as he exits the dock, having dragged this society through a rollercoaster ride of drama and tragedy. If he spends the rest of his days holed up at his uncle’s mansion, fearing the testosterone and lip-gloss coalition of his enemies who lined up in court this week, so be it. If he is confined to a cell in the hospital section of a prison, so be it.

He just needs to get the hell out of our lives. He has insulted this nation’s intelligence and sense of decency enough.

He killed one of us. He does not deserve to be one of us.

South Africa is a country reeling from scandal to scandal for many years now. The tailored truth that keeps the people oblivious to what is really going on is now joined by the next evil: chequebook justice. No corruption scandal got punished since, well, Schabir Schaik and Jackie Selebi, both of whom barely sampled the correctional facilities’ hospitality. Radovan Krejcir was caught entering the country with fake passport, and still was allowed to create a crime empire within our borders. More than 26 months after the Marikana massacre, not a single police officer is charged with, uhm, anything. President Jacob Zuma is still the president, after at least a dozen scandals that would consign presidents in other countries to the ignominy of resignation. There are many more examples.

But what is almost as corrosive as the actual crimes is the narrative being invented to paint these serial offenders as innocent victims. The sheer sophistry being doled out by the highly paid lawyers has the potential to create parallel realities of things we considered simple and clear. Krejcir, Shaik, Zuma, the Marikana policemen, and of course, Oscar Pistorius, are the real victims, according to this narrative. Pistorius can twist the truth on the stand, endanger many people, kill while knowing he will kill, and still be presented as the victim himself.

Universal basic income – an idea whose time has come

A call to action: Medical students volunteer to step out of the the classroom into the Coronavirus pandemic

Health facilities avoided out of fear, another mine temporarily closed and a rating agency’s grim forecast

Nomfundo Xolo for Spotlight
Save 6 mins