TAC: Funding, accountability and the dire consequences of closure 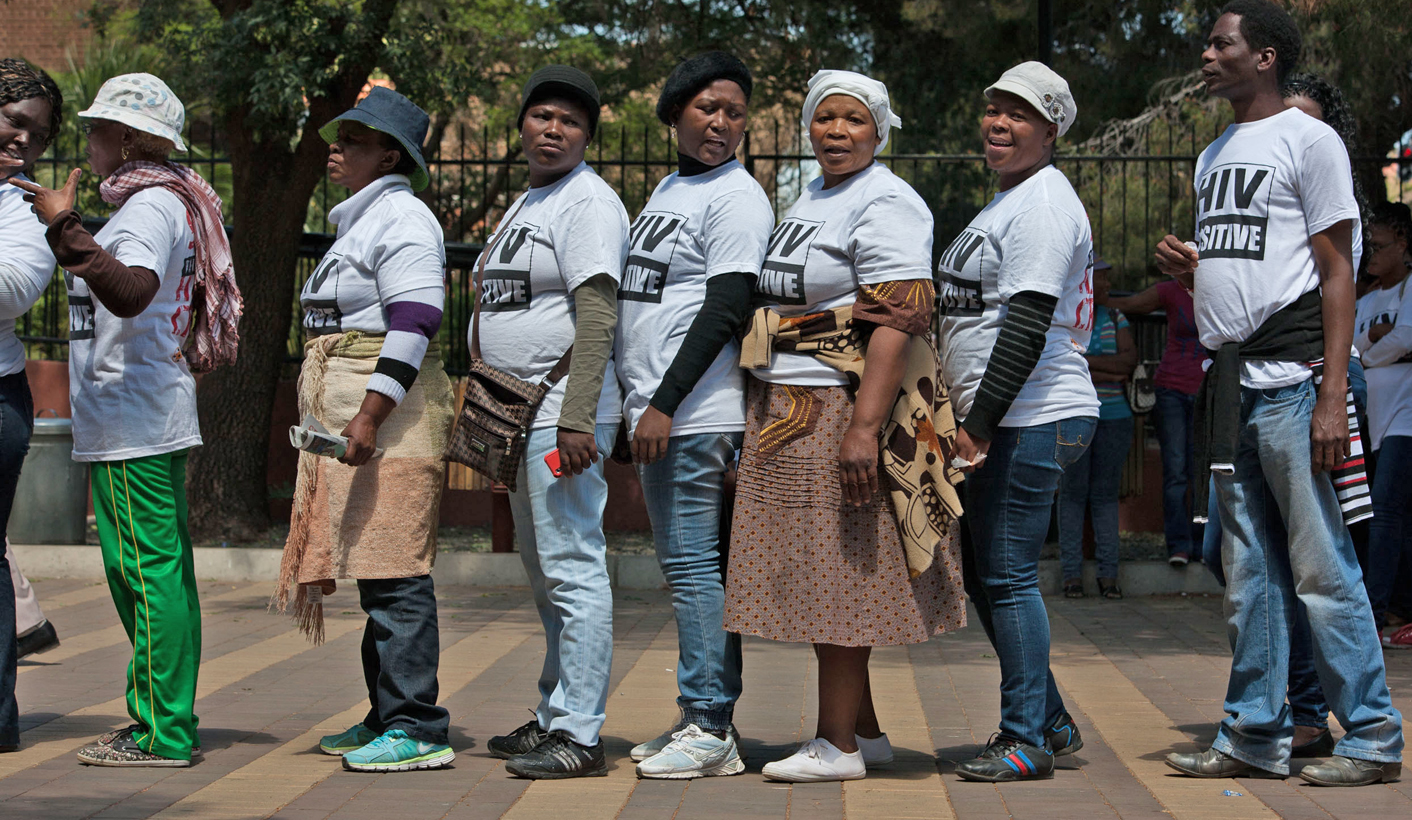 The Treatment Action Campaign (TAC) is one of the country's most well-known civil society organisations and one of the world's most influential HIV/Aids groups. Now, it's facing a massive funding crisis. The consequences could be dire. By GREG NICOLSON.

“I’m a hero now,” says William Mokhehle. “I’m a hero to other people because I was fighting for their services to be seen, and now I’m a hero for when they come back to work,” he says, speaking outside the Bloemfontein Magistrate’s court on Thursday.

In July, Mokhehle spent a night in the police cells after participating in a vigil outside of the Free State Department of Health. He was one of 129 people arrested while demanding the reinstatement of community healthcare workers who were dismissed without explanation. They also wanted a turnaround strategy to be devised for the province’s beleaguered health system and for MEC of Health Benny Malakoane to be removed. The TAC activists, many of whom are middle-aged and elderly women, were forcefully arrested and charged for participating in an illegal gathering. Their real crime: demanding quality healthcare and embarrassing the state.

The Free State protest is the latest instalment in TAC’s history of leading the struggle to improve access to quality healthcare. Now, that struggle is under threat as the group faces a funding crisis.

With 8,000 members across the country, the TAC’s work is broad. Most prominently, it’s known for confronting Aids denialism in the Thabo Mbeki era, winning a Constitutional Court case that opened the door for the programme to prevent mother-to-child transmission of HIV, and helping reduce the price of antiretrovirals (ARVs). But on a day-to-day basis, TAC literally saves lives. Activists monitor local clinics and try to rectify problems; they inform people about the risks of defaulting on medication, such as ARVs; and they hold a wide range of workshops.

“One reason for the funding crisis is that despite approximately 400,000 new HIV infections every year in South Africa, 170,000 Aids-related deaths, including an estimated 88,000 deaths per year of people living with HIV due to TB alone – the HIV epidemic is dropping down the political agenda in South Africa and internationally,” reads a TAC press release. The country’s response to the the Aids epidemic has seen a phenomenal improvement in recent years, with 2.4 million people now on ARVs and mother-to-child transmissions dropping by 90%. The rate of new HIV infections has dropped by a third and in only a decade life expectancy has risen by nine years.

As a result, funders are diverting money from South Africa, a middle-income country, to areas they think are more in need of support. TAC has lost key funders, leaving the organisation with only 30% of its 2015/16 budget. It’s trying to raise R30 million for next year, already a decrease on previous years. If it can’t get the money by February, it will face cutbacks or, potentially, closure.

“TAC’s mission is far from complete. The challenges facing Aids are far from over. For example, it has become blatantly clear in recent months that parts of the healthcare system are collapsing in a number of provinces and much of our gains could be lost,” says the organisation. While TAC is known for its work on HIV/Aids and its “HIV Positive” t-shirts, it penetrates every level of the healthcare system.

Mark Heywood, a TAC board member, says that as the organisation has grown its scope has broadened from primarily focusing on national campaigns to provincial and local issues. It now has structures in seven provinces and is focusing on health services where they are delivered. The nature of TAC’s leadership has also changed, with national leaders previously being some of the country’s most well-known activists. Now provincial leaders are at the forefront of their respective challenges.

Heywood has found that donors like to fund organisations on the rise but don’t always support established groups like TAC. During its well-publicised fight for HIV treatment, the group secured big bilateral contracts from foreign donors. TAC saw the shift in funding coming, says Heywood, but it has been difficult to find new donors. In South Africa there is not a tradition of giving and large companies are scared to fund organisations like TAC that are seen as adversarial to government, he says.

It would be a disaster if TAC closes, says Gilles van Custem, medical coordinator for Medecins Sans Frontieres in South Africa and Lesotho. The country would lose its strongest civil society actor in health because TAC gives a voice to patients. “We [would] lose a bit of our democracy,” he says. The health system only works if checks and balances are in place and one current form of accountability is TAC asking government the hard questions, like whether the 2.4 million people on ARVs are able to receive and are taking their medication.

“Losing TAC means that there will be no more strong patient voice to keep government accountable,” says Van Custem, whose team is working on new ways of preventing and treating HIV. In the future, government expects around five million people to be on ARVs, but without feedback and critical questions coming from patients, the state’s likely to be silent on things like drug stock-outs and whether patients get enough support. “It’s like going to school without having any exams to pass. You’re not going to perform well,” he adds. If TAC closes, it will lead to deaths. “I don’t think it’s an overstatement. I think it’s true,” Van Custem says.

UN Aids country director Erasmus Morah says as South Africa and the world move towards ending Aids, civil society organisations like TAC are much needed, but facing financial difficulties. “It would be such a shame to lose contributions of these iconic actors who have helped bring the HIV response this far, both at home and globally.”

TAC is speaking to a number of potential big donors, but the situation has shown Heywood it’s important to tap into local funding. TAC is now looking at calling on middle and working class South Africans to make one-off or monthly contributions and will launch a global crowd sourcing campaign in November. “Maybe it will be the beginning of investment from ordinary people who want justice and social justice and believe in the Constitution,” says Heywood.

In the Free State, the activists cannot comprehend the idea of TAC cutting back or closing.

Mokhehle joined TAC two years ago when he saw the organisation’s advocacy for the rights of LGBTI groups and people with HIV/Aids. His most memorable time with the group was handing out food parcels in Marikana during this year’s platinum strike. There, people were fighting for what was best for them, he explains, just like in Bloemfontein.

Nono Motusmi, a TAC member for five years, is also charged for protesting for better health services. In her work as a volunteer, she monitors whether people with chronic illnesses take their medication, helps form adherence clubs, monitors and evaluates local clinics, and tries to advocate for the dignity of patients. “It reaches the people. It comes up with solutions, especially with the department of health and corruption,” she says of TAC. She remembers forcing a clinic to institute disciplinary proceedings against a nurse who prevented a disabled child from receiving treatment. Without it, he would have fits.

At the Bloemfontein Magistrate’s Court, the case against the 129 community healthcare workers was postponed until January. The charges are spurious and the lawyers will lobby the National Prosecuting Authority to withdraw the charges unconditionally. But the activists were there on Thursday ready to face the price of campaigning for quality healthcare.

Mokhehle thinks about the funding problem. “It’s going to be a very painful thing because now with our struggle, where we are today, it’s because of TAC. If that means TAC can have a problem in terms of [funding] it means we are not going to carry on with our struggle because we don’t have anything. We don’t have any organisation that we can go to. TAC is the only organisation that can help us.”