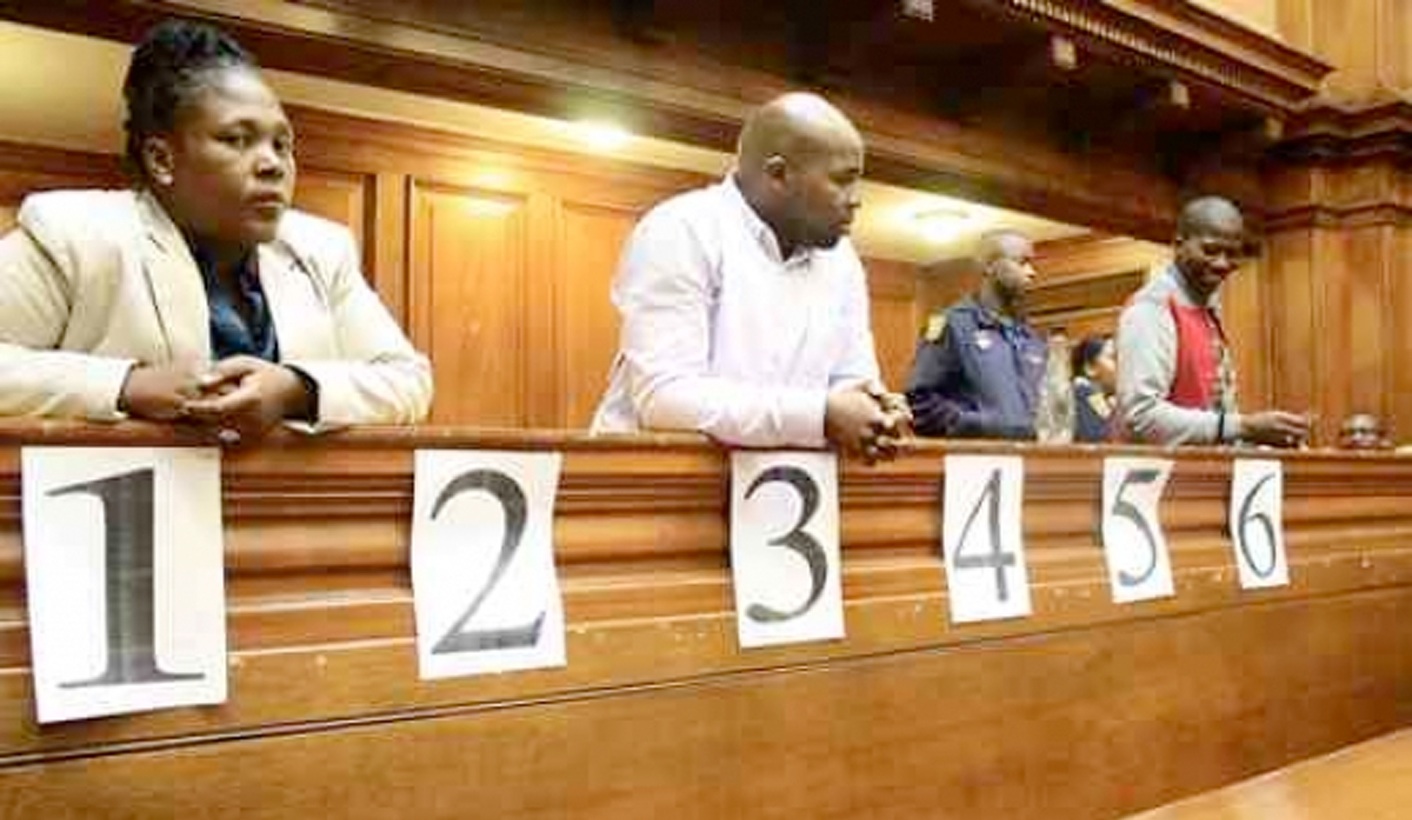 On Wednesday, Judge Robert Henney found Social Justice Coalition activist Angy Peter and her co-accused guilty of premeditated murder. Their bail was withdrawn and they will remain in police custody until sentencing on 24 November, unless defence lawyers present exceptional circumstances to the judge justifying the granting of bail. By Johnnie Isaac for GROUNDUP.

Peter, her husband Isaac Mbadu, Christopher Dina and Azola Dayimani were charged with assault with intention to do bodily harm and with the kidnapping and murder of Rowan Du Preez. The judge acquitted them on the first count but found them guilty on the other two.

Three police officers told the court that Du Preez named Peter and Mbadu as his assailants. During their testimony, the officers said Du Preez, who had been necklaced, could speak and was able to give them his name, residential address and the names of those responsible for his assault.

Henney said Du Preez was still alive at the time the accused were arrested. Dina and Dayimani were arrested later that day as accomplices in the matter after being named by state witnesses.

Captain Von Sitters (now Kok) and Constable Raoul Bernardo were the officers who found Du Preez after a passing motorist alerted them. The two officers told the court that they phoned the Kleinvlei police because where they found him fell within their patrol area. Chandre Wilhelm (now Haines) from Kleinvlei Station said the deceased named Peter and her husband as his assailants.

Henney described the officers as honest witnesses. He acknowledged inconsistencies and contradictions in their testimony, but said they were immaterial. He said the police did not know the history between the deceased and the accused nor Peter’s history with the police. (The defence alleged they were framed by the police because of Peter’s role in the SJC establishing the Khayelitsha commission of inquiry).

The judge said Bernardo was a young constable yet confident. He said Wilhelm was affected by what she had witnessed. He said they could not have been part of the conspiracy to implicate Peter and her husband.

Judge Henney said Du Preez had been suspected of stealing a television at the home of Peter and Mbadu on 11 August 2012 and they had confronted him. After that confrontation, the judge said, Du Preez had been assaulted at their premises, though they had denied being party to the assault and had blamed it on the community.

He also said Du Preez might have been forced through the assault to give up the contact number of the police office, Andile Tshicila, who allegedly bought the stolen TV.

The judge said none of the accused were impressive as witnesses and their evidence in court was not convincing.

Referring to Peter’s testimony, he said she had been argumentative with the state prosecutor, Phistus Pelesa, instead of answering questions clearly.

He said Peter did not dispute having been seen wearing a pink gown [by two state witnesses, Desiree Jack and Asavela Zici] at the scene where the deceased was assaulted. Instead she had only said she was pregnant and was not the only pregnant woman in that area. He described her as a person who was full of self-importance who acted like everyone knew her.

He dismissed her version of events of 11 August, that she walked away from her house which was full of people who were assaulting Du Preez.

Judge Henney ruled out the possibility of a conspiracy by the police in response to Peter’s role as an activist. He said she was not the only member of the SJC who had been involved in setting up the Khayelitsha Commission of Inquiry into policing and asked why she would have been the only one targeted.

He said Mbadu during his testimony had never mentioned having problems with the police and Dina and Dayimani were not enemies of the police.

Judge Henney said it was difficult to believe that the police, with all the resources at their disposal, would use an incompetent detective like Standford Muthian to fabricate a case.

Judge Henney said Mbadu was also not an impressive witness. Mbadu had not convinced the court why he would also be implicated in a conspiracy since he was not part of the SJC or involved in the Khayelitsha Commission.

The judge that Dayimani, the third accused whose taxi was used to transport Du Preez from where he was kidnapped to where he was assaulted, had contradicted that of a witness called to corroborate his alibi.

On the fourth accused, Dina, the judge said the evidence of Asavela Zici and that of Desiree Jack placed him at the kidnap scene. The accused had claimed that Zici had implicated him because she was bitter after he had broken up with her. However, Jack also claimed to have seen him at the scene.

Regarding the evidence of the state witnesses, the judge said, John Ndevu, the grandfather of the deceased had not tried to hide his grandson’s mischievous behaviour and criminal conduct and his testimony had been limited to what he saw. Asavela Zici, the judge said, had given a clear account of what she saw. She had not been vague or evasive.

He described Desiree Jack’s testimony as concise and clear. He said all witnesses were dealing with a changing scene and sometimes details of what they saw were different.

But she and Ntsikelelo Dlabantu had corroborated each other on where the deceased was kidnapped by taxi.

Regarding the evidence of Dlabantu, Judge Henney said he had testified about seeing Mbadu at the creche where Du Preez was assaulted and his evidence was credible because he had substantiated what he saw.

Regarding Muthian, the judge said he had never shown any enthusiasm for the case and had only waited for instructions. He had not seized the taxi as evidence and had not investigated the alibi of Peter and Mbadu because he had not been given instructions to do so.

Defence counsel, William King said he was disappointed with the outcome. Peter and Mbadu would continue their legal battle, he said. DM

Photo: Angy Peter and her co-accused in the High Court on Tuesday, the first of the two days on which judgement was delivered. Photo by Masixole Feni.