Crucial Sexual Orientation and Gender Identity UN resolution: SA’s vote will lead the way – but what will it be? 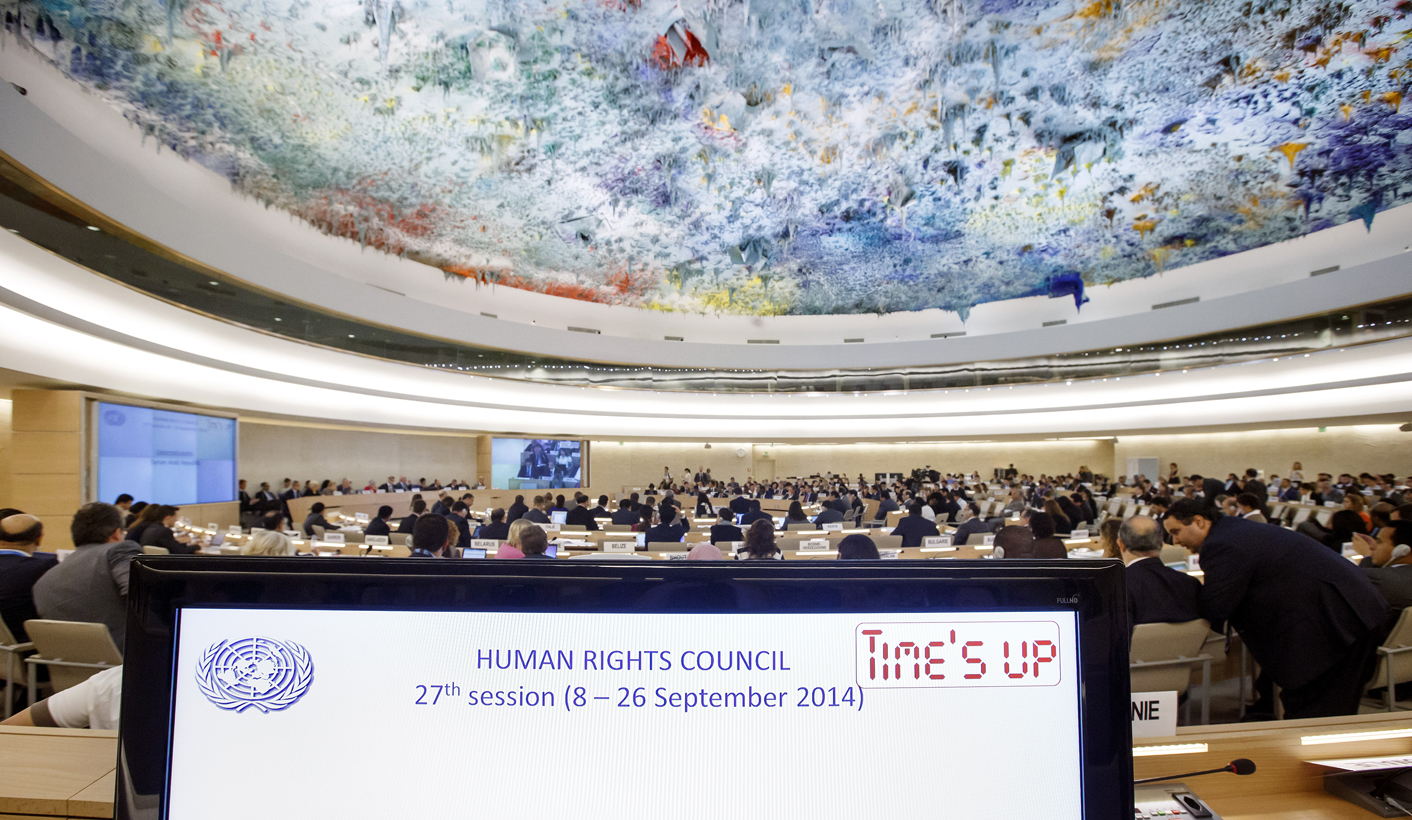 Three years ago South Africa and Brazil co-sponsored a historic resolution encouraging the UN to discuss discrimination and violence based on sexual orientation and gender identity (SOGI). Despite South Africa’s leadership on this critical global issue there is, as of yet, no clear indication of how SA will vote on a new SOGI resolution tabled at the 27th Session UN Human Rights Council last week. By MARIANNE THAMM.

In the same week that LGBTI activists from across the globe were discussing a SOGI resolution tabled by Uruguay, Chile and Brazil at the 27th Session of the Human Rights Council in Geneva, another lesbian was found murdered in Johannesburg, highlighting, once again, the crucial need to address the issue of gender and sexual orientation-based violence.

On 14 September, Thembelihe ‘Lihle’ Sokhela (28) went missing in Daveytown and was found murdered two days later, hidden behind a bed in the home of a suspect who has since been arrested. She had been brutally battered, raped and smothered. The suspect, who had been released on parole in 2012 after serving a sentence for rape and murder, will appear in court in Benoni on 26 September.

Investigating the murder, members of Iranti-org, a queer human rights visual media organisation based in Johannesburg, found that Daveytown police had failed to gather crucial evidence from the scene and will be tracking the progress of the case through the police system and the courts.

It was precisely for this reason that the Department of Justice in 2011 set up a task team to develop an intervention strategy as well as a rapid response mechanism that would identify and track cases such as Sokhela’s. While activists welcomed its establishment at the time, it appears the task team has accomplished little that is concrete or tangible since.

The resolution tabled at the 27th session of the HRC in Geneva by Uruguay, Chile and Brazil, and calling on the High Commissioner to report bi-annually as well as focus on violence in relation to issues of sexual orientation and gender identity globally, will be voted on in the next few days. And while South Africa has shown international leadership on the issue, introducing a groundbreaking resolution with Brazil in 2011, local LGBTI activists remain uncertain as to how South Africa will vote this time around.

This week, in response to the lack of clarity on the vote, a group of concerned South African-based NGOs wrote to Minister of International Relations and Cooperation, Maite Nkoana-Mashabane, the Minister of Justice and Correctional Services, Michael Masutha and Minister of Social Development, Bathabile Dlamini, urging them to support the SOGI resolution, a key human rights resolution.

“Naturally a vote against this resolution would be contrary to South Africa’s foreign policy and constitutional mandate. An abstention would be seen in a similar light: a failure to speak up and show the commitment to the human rights of all people. In that vein, we also vehemently oppose the bringing of, or support for, procedural measures at the Council that prevent issues being discussed and/or voted-on. This is an issue on which we need more – not less – discussion at the Council,” the letter to the Ministers reads.

At the 26th session of the UN HRC, over 500 civil society organisations stressed that the council needed urgently to adopt a resolution ensuring regular reporting, constructive dialogue and sustained and systematic attention to the breadth of human rights violations on the grounds of sexual orientation and gender identity.

“South Africa’s historical experience shows how damaging policy can be when issues of principle are sacrificed to economic and political expediency. We cannot let other national interests or political concerns cloud our principled position on fundamental human rights,” the statement reads.

The activists have noted that there have been attempts to dilute the focus of the resolution and to remove the words “sexual orientation and gender identity”. There is also opposition to regular reporting, by China in particular.

“Rather than being a cause for concern, regular reporting would in fact provide scope for ongoing dialogue and discussion in the Council as it would be based upon reports from the neutral and professional office of the High Commissioner. Regular reporting would also remove the politicisation of this sensitive issue within the Council every few years,” the statement to the Ministers reads.

What is frustrating activists is that it appears as if South Africa did not hold a consistent position on the SOGI resolution with the Ministries of Social Development and Justice supporting it in line with the country’s constitutional obligations, while DIRCO appears less committed and more hamstrung by Realpolitik.

There are countries that view the Uruguay/Chile/Brazil SOGI resolution as being somehow “pushed” by Western countries. The African bloc is opposed to the resolution and it is believed that Namibia and Botswana were unlikely to support it due to trade agreements with China.

In June last year South Africa voted with Russia for a no motion on a debate about the protections on nine categories of family, as set out in South Africa and which includes same-sex families. Russia is vehemently opposed to SOGI issues, as is Egypt.

But on Friday last week, Minister of Social Development, Bathabile Dlamini, addressing a UN Assembly side event on sexual reproductive health rights, delivered a powerful speech that unequivocally supported the SOGI resolution and which highlighted the fact that this time round, Latin America had taken the lead.

“Human rights are therefore essentially products of southern, including African, struggles against all forms of oppression. It is therefore not surprising that the Latin American countries are leading the world in advocating for the rights of all people without distinction of any kind. It is time that we as Africans lend our collective support to our Latin comrades as it is through empowering our people that we will also win the fight for the right to development and for equality between countries. Let’s take this opportunity to stop trading off the rights of our own people in the belief that it strengthens our fight for a more equal and just world,” Dlamini told those gathered.

She added that it was sad that many countries could only agree to progressive commitments on a condition, “namely that the commitment is subject to being ‘in accordance with national laws and policies’, or ‘within the national political and legal framework’.”

“I want to emphasise the word ‘sadly’ – how committed can one be to the rights of individuals if you still seek to do so within existing laws and policies? And, let’s remember these conservative policies and laws were in many instances imposed on us by our colonisers to deny women, children and sexual minorities the freedom to privately choose and live their sexual and reproductive lives”.

Dlamini’s speech was hailed on Friday by many seeking some clue as to the country’s position or how it would lobby around SOGI.

Last month the Demand Accountability Campaign was launched by African civil society organisations, including the Coalition of African Lesbians, demanding that Minister of International Relations and Cooperation, Maite Nkoana-Mashabane, set a date for the Regional Seminar on Human Rights, Sexual Orientation and Gender Identity and Expression in Africa in line with government’s July 2013 commitment to do so.

“Unfortunately, all attempts to engage the Depart of International Relations and Cooperation [DIRCO] have as yet been unsuccessful,” a statement by the campaign organisers reads.

The South African government has designated Ambassador Abdul Minty as the South African focal point on the SOGI resolution. The Daily Maverick had not had a response to two emails sent to the Ambassador at the time of publication.

On Wednesday South Africa will celebrate Heritage Day. One of our proudest pieces of modern post-1994 “heritage” we have to celebrate is the promotion of a culture of human rights as embodied in the Constitution, and it is a vision that we have shared with the rest of the world. The vote on the SOGI resolution this week will hopefully ultimately reflect the lead this country has taken on these crucial issues. DM

Photo: A general view of the assembly during the interactive debate after the presentation of last report of the Commission of Inquiry on the Syrian Arab Republic at the United Nations Human Rights Council, at the European headquarters of the United Nations in Geneva, Switzerland, 16 September 2014. EPA/SALVATORE DI NOLFI