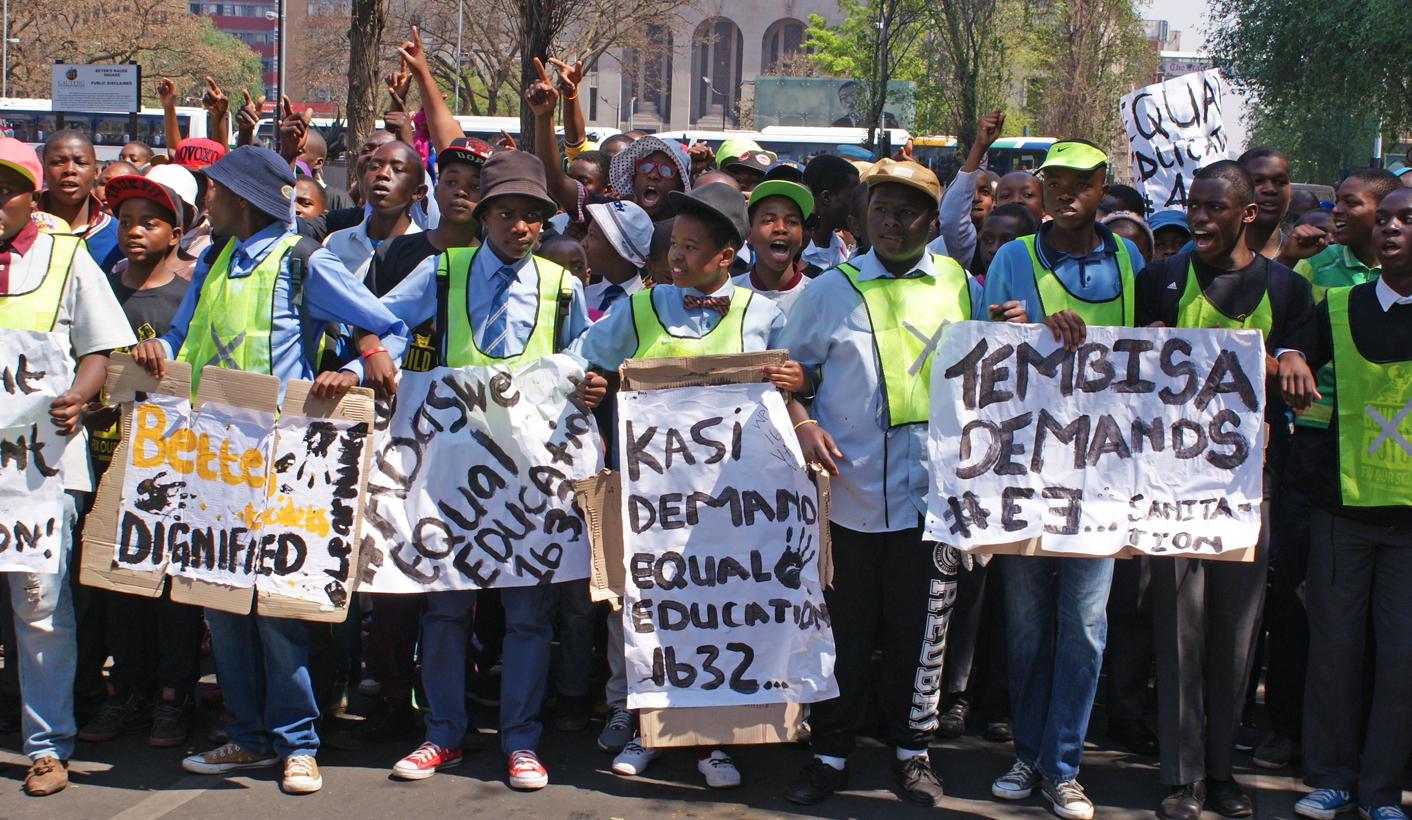 If students are going to spend the day at school, they need decent toilets. It seems obvious, but in some Gauteng schools, the situation is worse than in prisons. Equal Education and its young activists are trying to change that and they may have found a partner in MEC Panyaza Lesufi. By GREG NICOLSON.

“It’s all about dignity. How can I do that?” asked Pontsho Shakhane, who graduated from a Kwa-Thema high school last year. “It’s hard to go to the toilets, especially when you are a girl and you have your monthly period.”

Shakhane, 17 years old, was the MC for Equal Education’s march on Saturday to the office of the Gauteng MEC for Education. Last year, the organisation audited 11 schools in Thembisa and found that in over half the schools, more than 100 students share a single toilet. Comparing it to research by the Wits Justice Project, Equal Education said the sanitation conditions are worse than at Johannesburg’s overcrowded Medium A Prison where 65 inmates share a single toilet. Soon they realised the problem also extends to Kwa-Thema and Daveyton.

When Shakhane was in Grade 8, there were already too few toilets and students exacerbated the problem by using them to smoke and do drugs. With few toilets and no sanitary bins, many of the female students would stay home when menstruating.

Shakhane joined Equal Education last year, inspired that it was a platform to help students fight for their rights. She was trained as a facilitator, one of the group’s local organisers who mobilise youth to campaign for a better education. “It’s exciting working with youngsters in my age group,” said Shakhane on Monday. She helped establish a branch in Kwa-Thema, which has about 200 members, and is gaining ground in Duduza and Tsakane.

Teven Mahlangu has been with Equal Education since 2010. “I wanted to make a change, it’s as simple as that,” explained the 19-year-old from Thembisa. When there were sanitation problems in his school, students would stay home. “It was very, very smelly. You couldn’t concentrate,” he said. It was obvious students wanted the issues addressed. Both Shakhane and Mahlangu were part of the team assisting students to audit sanitation issues in their own schools.

When Equal Education took their findings to MEC Barbara Creecy in 2013, she eventually sent 10 prefabricated toilets to Thembisa, 10 to other areas of Gauteng, and ordered repairs in 60 schools across the province. In May, however, Equal Education said the toilets sent to Thembisa were still locked and many more schools required urgent repairs.

When MEC Panyaza Lesufi took over education in Gauteng, he said he would solve the sanitation problems within his first 100 days. His five-year plan includes providing functional toilets to ensure students have the basics to learn. “Yet, during the first week of September, [Equal Education] members counted 200 blocked or closed toilets in Tembisa alone. A two-week audit of high schools in Daveyton and Kwa-Thema, conducted in August, also revealed that on any given day, up to 80 school toilets are blocked or closed in these areas,” said a press release from the Equal Education.

Commenting on his first 100 days in office last week, Lesufi said he managed to get R150 million to address sanitation issues and an audit of schools across the province found 580 schools needed intervention. Of those, construction has been completed in 400 schools, said the former department of basic education spokesperson. “I was extremely disappointed that this deadline has not been met and I have reprimanded the officials that are responsible for this area of work. I have since appointed dedicated project teams whose sole focus is on sanitation at schools and their deadlines are non-negotiable.” A quality assurance test has been established to ensure the work is completed.

Much of that work appears to have come after pressure from civil society. In the two weeks since Equal Education announced it would march to the MEC’s office, the group saw contractors immediately arrive in Thembisa to clean and unblock toilets, open the locked prefabricated blocks, fix pipes, paint walls and replace taps and windows.

“Sanitation is dignity,” said Lesufi on Saturday as he joined the 2,000 young demonstrators in Johannesburg, marching to his own office. The MEC expanded on his recent comments, explaining that R150 million will be spent on sanitation upgrades in 578 schools, with work already completed in 406 schools. All school toilets in Gauteng will be unblocked by 30 November, he promised, and the 51 schools in Thembisa will have adequate sanitation by 19 September.

Equal Education welcomed the response but said more work remains. By 27 September, it wants all toilets in Thembisa schools opened and unblocked. It wants Lesufi to release a long-term costing plan on maintaining the toilets and supplying them with sanitation materials. It says the Gauteng department must aim for a better ratio than the National Minimum Norms and Standards for School Infrastructure, which operates on a sliding scale with the ratio of students to toilets increasing as a student numbers increase, meaning, at the end of that scale, in a school of 1,200 there can be 43 girls and 100 boys per toilet. In contrast, the Department of Affairs and Forestry had suggested one toilet per 25 girl learners and one toilet and one urinal per 40 boy learners; the World Health Organisation’s recommendation for schools in low-cost settings is one toilet for every 25 girls and a toilet and a urinal for each 50 boys.

Shakhane has already noticed a steady improvement in her old school’s toilets in recent years. Cleaners now come every day. Mahlangu says in Thembisa the local Equal Education members have been working on improving the sanitation infrastructure and they’ve been educating students on how best to use and maintain the facilities.

Both young activists say Lesufi’s response shows there has already been progress. Now, the MEC needs to deliver on his promises so that students in Gauteng can focus on learning and not whether there is an available toilet. DM