Pistorius Judgment: A day of tension and surprises 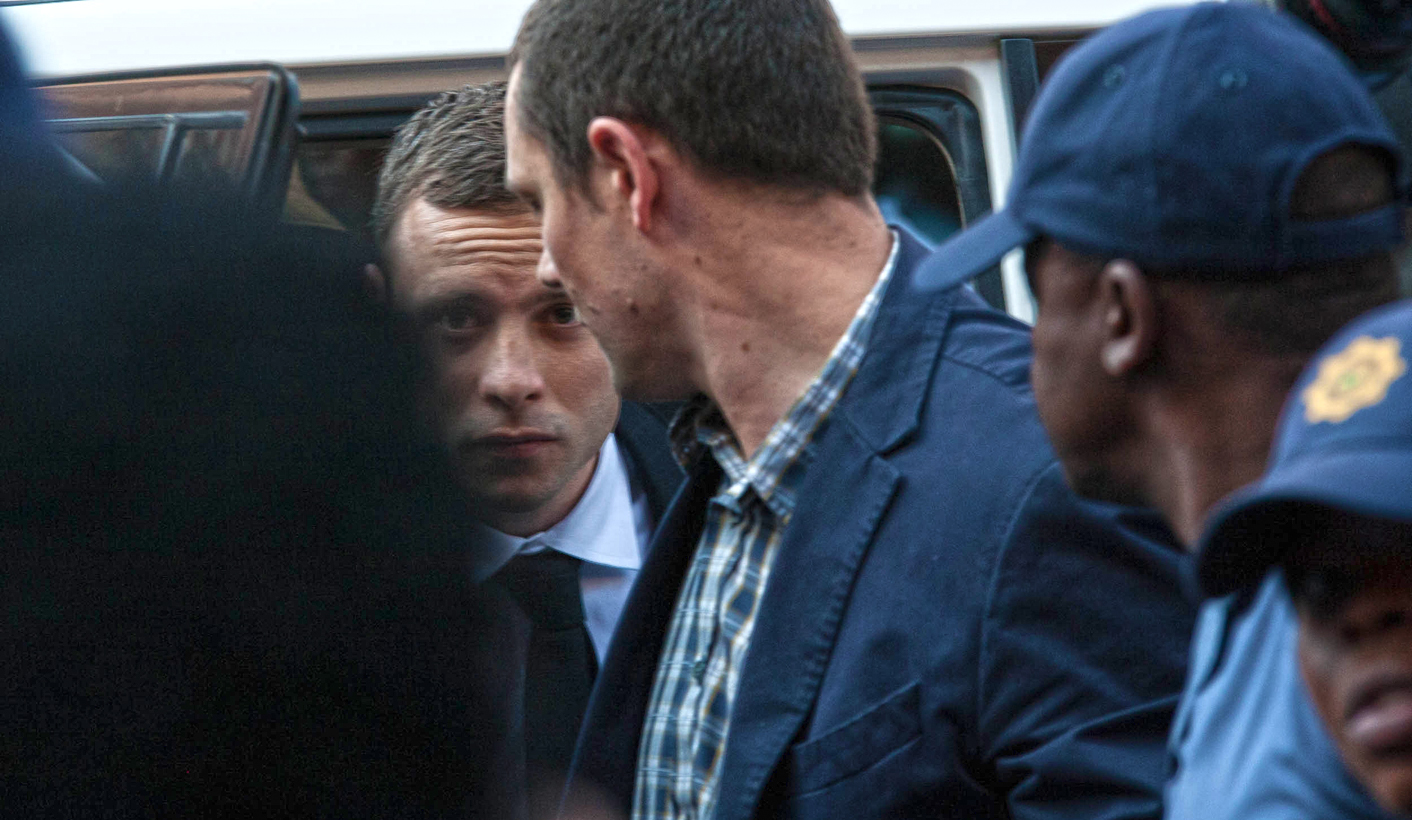 The court benches were packed. All the characters we’ve come to associate with this case were in attendance. Journalists stalked the corridors of the North Gauteng High Court in search of individuals with an opinion on Pistorius’s fate. Pistorius cried. All things considered, it was a day like many others in the Pistorius court case. Except, of course, far more important – and controversial. By REBECCA DAVIS and GREG NICOLSON.

For hours after the North Gauteng High Court adjourned, switchboards on South African radio stations were alive with one topic: did Judge Thokozile Masipa get it wrong? The sheer volume of phone calls, text messages, and tweets was astonishing. Suddenly, it appeared, everyone had the legal savvy to engage with Masipa’s definition of dolus eventualis, and the majority seemed bent on strenuously contesting it.

Some, who for weeks had been praising Masipa for her “objectivity” – as if it were not literally the bare minimum standard of her job to be objective – suddenly seemed to turn against her as it became clear that she wouldn’t rule in the way they’d expected. Some wild conspiracies began to circulate, with the previously unimpeachable Masipa at the centre: bribery, corruption.

When the day began, it was with a quite different set of expectations. From before 6am, journalists started milling around outside the North Gauteng High Court, broadcasters possessively staking out territory, with the Dros tent doing a brisk trade in coffee. Exotic accents filled the air: French, German, Spanish journalists loudly conversing with editors. A few hours later, you’d barely be able to move down Madiba Street without hitting some earnest reporter in a suit recording a piece to camera.

“Here we are outside the North Gauteng High Court, where murder-accused Oscar Pistorius stands to learn his fate…”

Pistorius fans, detractors and sideshows gathered for the media. Waiting for the former athlete to arrive, 73-year-old Ria du Plessis – sporting a green wedding hat – hung a banner in support of the accused. “Oscar you were you are you always will be inspiration, a hero,” it read, its passion overcoming its punctuation.

Caroline Trummer didn’t agree. She stood by her motorbike, which was covered in decorations, and said Pistorius should be found guilty. “In my opinion, if someone takes a gun in his hand and is at home and the home is in a secured estate in secure electric walls, second floor, there is no need to shoot through a closed door four times in such rage, such anger, and claim afterwards he was fearing for his life,” said Trummer. Ironically, her bike’s number plate is ‘NT GUILTY GP’.

Photo: A biker at the case who wanted Pistorius convicted has the number plate “NT GUILTY GP”. (Greg Nicolson)

The huge media presence also brought opportunists. Dressed in orange jumpsuits, the Siyabangena crime-fighting group demonstrated on the street, apparently to support women, but some of its members didn’t know why they were there. Passers-by lingered, hoping to get a glimpse of the man of the moment. Interested law students came to follow the case. One woman, with a banner advertising her own achievements, said she supported both Pistorius and Steenkamp, but was more interested in talking about her love of rhinos and Mrs Limpopo title.

Within the courtroom, the benches filled up with familiar faces from the 40+ days of trial. Resplendently-coiffed Darren Fresco – Pistorius’s BFF turned enemy, who won himself immunity from prosecution thanks to snitching on Oscar – was there, flanked by his wife. Soccer player Mark Batchelor, whose legs Pistorius allegedly threatened to break, arrived late but managed to squeeze his hulking frame among journalists.

There were more broken legs in the form of Oscar Pistorius’s older brother Carl, who arrived in a wheelchair with both legs propped up in moonboots, the effects of a car accident a few weeks ago. Carl was wheeled to a special position near the lawyers at the front of the courtroom.

The expectation had been that Judge Masipa’s reading of her judgment would be lengthy and tedious. How wrong we were; Masipa positively zipped through matters, though she was clearly giving a summarised version of her judgment. She dismissed the state’s case in what seemed like no time at all.

After all the agonising days the court spent on forensics, on ballistics, on the nature of wounds on Steenkamp’s back, on the magazine rack and the bloody fans – it appeared that the only real crux of the matter for Masipa would come from the testimony of neighbours, matched with the objective facts of phone records. “Most witnesses got their facts wrong,” she said bluntly. “Television did not assist.”

The WhatsApp messages which galvanised the nation – mainly out of sympathetic fear at the thought of their own domestic communications being read aloud in open court – also got short shrift from Masipa. None of it proved anything, she said. We’re left with nothing but the memories of Barry Roux and Gerrie Nel reading them out, page after agonising page of babas and booboos.

Up until the first court break, it looked as if everything was going swimmingly for Team Oscar. But just before the first adjournment, Masipa dropped an ominous hint. Pistorius’s statements about shooting through the door, she said, were “inconsistent with someone who shot without thinking”. She promised to return to this point in her judgment.

Masipa was initially similarly speedy in dispatching aspects of the defence’s case. (One briefly wondered if she could rule in favour of neither side.) Pistorius’s famous Generalised Anxiety Disorder did not affect his ability to tell right from wrong. The idea that Pistorius pressed the trigger as some sort of “startle reflex” was rejected. The state had “correctly” submitted that if Pistorius never intended to shoot anyone, he couldn’t rely on putative private defence. Pistorius was an evasive, untruthful witness, and Steenkamp met her end under “peculiar” circumstances.

Hardly glowing words for the defence. But moving rapidly forward, Masipa took premeditated murder off the table. The state’s case was circumstantial and failed to prove that Pistorius had intended to kill Steenkamp. She then progressed to the question of murder dolus eventualis, a charge a number of legal experts had said in advance they expected Pistorius to go down for. But nope, “the evidence does not support the state’s contention that this could be a case of dolus eventualis”.

There was an almost palpable sense of shock in the courtroom when Masipa disposed of dolus eventualis like this. This surprise was supplemented after lunch when Masipa said that a “reasonable person” should have foreseen that four shots might kill the toilet’s occupant, and a “reasonable person” should have taken steps to guard against that possibility.

Wait – wasn’t that dolus eventualis? wondered people who had just learnt the term dolus eventualis. And, in fairness, a good number of legal experts voiced their own concerns.

The likes of Fresco and Batchelor were seen earnestly – separately – discussing the potential scope of dolus eventualis. At least one journalist bemoaned the effect of Masipa’s finding on their soon-to-be-published book.

Outside the courtroom, a kind of shellshock prevailed among Steenkamp supporters. A small group of ANC Women’s League members, who sang struggle songs throughout the day, expressed dissatisfaction. The group’s Gauteng spokesperson Jacqui Mofokeng said the League still wants a guilty verdict, even if it’s not for murder. Mofokeng described the judgment so far as “a little bit worrying”.

“As a mother, as everybody else, what does it say about our justice system?” she asked.

However, former judge and Special Investigative Unit head Willem Heath was also outside court and praised Masipa’s concise judgment thus far. “As far as premeditated murder is concerned, the evidence that is required to prove that is much more than the prosecution tended or offered to court. They simply didn’t prove that,” said Heath. Asked whether an acquittal could harm the image of the justice system, Heath, who was at the trial as a commentator for BBC, said the process and judgment, in fact, shows the world that South Africa practices justice.

There seems little doubt that Friday’s court proceedings will be a guilty verdict for Pistorius on culpable homicide. Whether this will satisfy the Steenkamp family remains to be seen. Whether it satisfies the rest of us is, unfortunately, irrelevant. DM