The road to perdition: How the ANC lost its way, one conference at a time 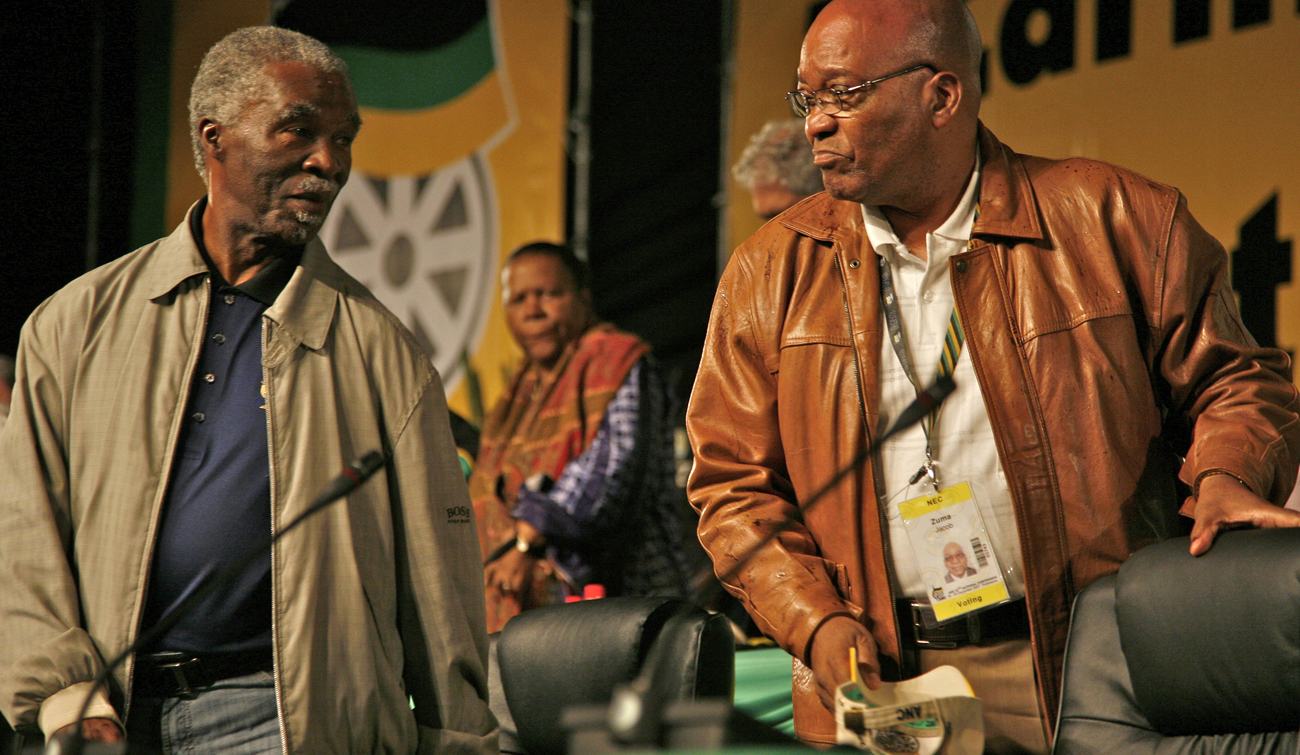 Last week the ANC announced that its mid-term review conference, the National General Council (NGC) would be held in June 2015. The party said the NGC would “take a critical look at the policies adopted at the 53rd national conference in 2012 and the extent to which they have ensured decisive and accelerated socio-economic transformation in this, the second phase of our transition”. To the untrained eye, this might look like just another big ANC talk shop churning out gobbledegook. It could be that, or it could follow the experience of past NGCs and see the applecart overturned again. If you look back, much of the current mess can be pinpointed to past NGCs. So pay attention to the one coming. By RANJENI MUNUSAMY.

Genesis in the current political context is the ANC’s historic 50th national conference Mafikeng in 1997. It was a major turning point in the history of the organisation and the country. Nelson Mandela handed over the reins of the ANC to Thabo Mbeki and Jacob Zuma was elected as the party’s deputy president. It was the conference that thrust the two men together in a partnership that would culminate in an epic battle for supremacy. It was the first time the ANC could properly assess its transition to power and plot the way forward as the party in government.

It was decided at Mafikeng that the ANC would no longer meet every three years for elective conferences as there needed to be focus on running the state. So instead, national conferences would be organised every five years, and national general councils would be held mid-term to assess the progress in implementation of policies and resolutions.

In the year 2000, the ANC held its first NGC in Port Elizabeth. Mbeki had become state president the year before and was at the height of his power. It was before he became fully immersed in the Aids and Zimbabwe crises. The arms deal controversy was simmering. But Mbeki was firmly the man in charge, both of the ANC and the state. In his address to the 2000 NGC, Mbeki spoke of weeding out the ANC of “opportunists and careerists”. He said those who put their personal objectives above those of the ANC “should leave this almost 90-year-old organisation of the people because their political home is elsewhere”.

“The result I am talking about is that we have attracted into and continue to retain opportunists and careerists within our ranks. These are the people who join the movement not because they respect or support any of the strategic objectives I have mentioned. They join with the great ease that our procedures as a mass movement permit, with the sole aim of furthering their personal careers and using the access to state power we have as a ruling party, to enrich themselves.”

Mbeki talked about the need to create a “new cadre”, a prototype ANC member who is skilled, patriotic and politically committed to the objective of building a modern, developed society. On the face of it, it all sounded good. Below the surface, resentment was building against Mbeki. People felt he was too powerful and arrogant enough to tell others to get out of the ANC. Mbeki’s detractors felt he was using the “new cadre” line to hound out his critics, particularly from the Left. Mbeki did not care. He wanted a clean out, and was not worried about displaying his contempt for others.

“As comrades are aware, much too often, whenever we meet in conference to elect our executive committees, from the branch executive committees upwards, many comrades spend large amounts of time canvassing, lobbying and making deals to have their favourites elected into executive positions. Even during discussions, some of the delegates will stand up and speak, not because they have anything to say, but because they want the delegates to see them and hear their revolutionary speeches, even if these speeches have nothing to do with what is under discussion.”

All true, of course, but it was statements such as these that sowed the seeds of rebellion.

By the time the next NGC came around in 2005, there was a full-blown war. In 2002, Mbeki and Zuma had been re-elected at the Stellenbosch national conference, but it had been revealed just before that Zuma had been under investigation by the former Scorpions unit along with Schabir Shaik. In May 2005, Shaik was convicted of fraud and corruption and two weeks later, Mbeki fired Zuma as deputy president of the country. He was then charged with corruption, and stepped back from his duties in the ANC.

The ANC NGC convened in Pretoria in July 2005 under extremely tense conditions. While Mbeki had been re-elected the year before as state president, the tide was turning against him in the ANC. He had been accused of using state organs to destroy Zuma politically. The ANC contingent from KwaZulu-Natal led a revolt against Mbeki from the floor of the conference, singing “Zuma for president”. The delegates demanded that Zuma be reinstated and that he not withdraw from party structures.

From that NGC, Zuma’s journey to the ANC presidency in Polokwane began. He became the figurehead of the battle to get rid of Mbeki, and disparate factions united in a ground-level campaign in ANC structures. Zuma’s rape and corruption trials provided the platform to rally support behind him. In the meantime, those loyal to Mbeki used state structures to fight a political battle. The transcripts of intercepted communications, contained in the spy tapes handed over to the Democratic Alliance last week, reveal some of the behind-the-scenes manoeuvering in the Mbeki-Zuma battle.

The deep factional battles around the Polokwane conference tore the very fabric of the ANC. It should have been a lesson to the organisation avoid the cult of personality and manage succession issues better.

But the ANC is too stuck in its ways.

The ANC’s third NGC was held in Durban in 2010. The anti-Mbeki coalition that carried Zuma to victory at Polokwane had already disintegrated. But Zuma had been become state president the year before and was now presiding over the levers of the state. He seemed to think he did not need to look after the constituency that rallied behind him, and instead opened doorways in the state for his family and friends.

But there was a new big personality in the ANC, around which another cult was building. Julius Malema saw Zuma’s vulnerabilities and maximised on them. At the Durban NGC, Malema and his acolytes in the ANC Youth League staged an upheaval over the nationalisation of mines. It was the beginning of the economic freedom campaign on which the Economic Freedom Fighters would years later be launched.

Zuma and ANC secretary general Gwede Mantashe used the disciplinary structures of the ANC to try to smash the Malema cult. Instead, just as Zuma had done years earlier, Malema used this as a launch pad for his own political ambitions.

You see the pattern?

Like Mbeki in 2004, Zuma looks unstoppable now. He is firmly in control of the ANC and the state, having secured a second term. Zuma has managed to do what Mbeki could not. He was successful in weeding out his critics and enemies from the ANC – first through the Congress of the People (COPE) and later Malema’s crowd. The South African Communist Party has been captured and neutered, and Cosatu is paralysed. The ANC Youth League is also contained and has no power to campaign for or against anyone. All these structures were key to Mbeki’s fall.

This is why Zuma’s chances of survival are stronger than that of Mbeki’s. Only the ANC itself can remove him from power and he has made sure that the entire leadership is made up of his loyalists. But like Mbeki, Zuma has messed up the security, intelligence and prosecuting agencies, and these are now his main vulnerability.

If Zuma makes it past next year’s NGC unchallenged from within the ANC, he will survive his term. The numerous scandals at his feet, including the Nkandla and spy tapes issues, are not insurmountable if he continues to enjoy widespread support in the ANC. But if the seeds of division are being sown, it could gain momentum towards the 2015 NGC.

The only certainty about the ANC is that absolutely nothing is predictable. The next nine months may decide which road the ANC, and South Africa, will take in the near future. All options are open, and many of them are plausible.

This time, however, one crucial element has been altered. Since 1994, all the challenges that were mounted were firmly based within the ANC itself. Next year’s gathering will possibly have to contend, for the first time, with a greater threat from the outside than from the inside. On its own, that simple fact may change the game significantly.

The decisions of the 2015 NGC could have a major role on the country’s future and the leadership configuration of the ANC. And that may have far-reaching consequences for how long the ANC continues to be the party in power. DM