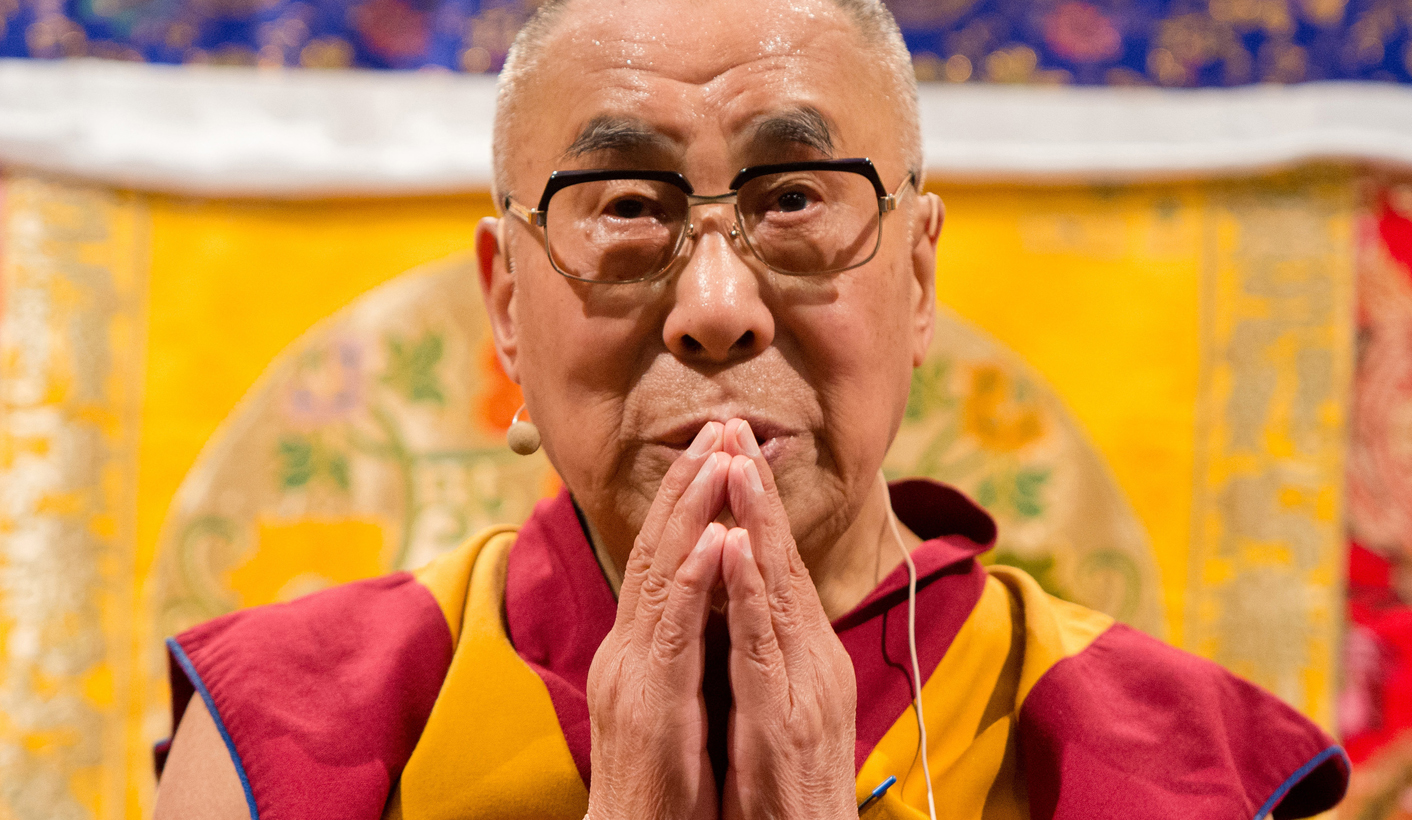 The inability of the Tibetan religious figure and Nobel Peace Prize Laureate, the Dalai Lama, to be able to enter South Africa for a conference of other laureates points to the inner confusion of values in South Africa’s foreign policy, critics say. J. BROOKS SPECTOR takes a look.

This time around, he was supposed to be one of the honoured guests at an annual gathering of Nobel Peace Prize Laureates. The event has taken place every year since 1999, and this year’s meeting has been scheduled for Cape Town in October. As one of the Peace Prize laureates, in the fullness of time, the Dalai Lama’s people in India presented his application for a South African visa to the South African High Commission in New Delhi. Then, on 4 September, South Africa’s Department of International Relations and Cooperation issued two separate media releases about this presumably routine effort to secure permission to attend a gathering at which the Dalai Lama was supposed to be one of the honoured guests.

The DIRCO website where these notices were posted just happened to have another media release right below the other two that a suspicious mind – or perhaps just a faintly cynical one – could draw a very interesting inference or two from it. This third notice, issued on 3 September, explained DIRCO Minister Nkoana-Mashabane just happened to be visiting China to co-chair the South Africa-China Inter-Ministerial Joint Working Group on Cooperation. Yup.

“South Africa–China bilateral relations have enjoyed phenomenal progress in the space of fifteen years and have grown from a Partnership to a Strategic Partnership and subsequently to a Comprehensive Strategic Partnership. South Africa and China have committed to building, developing and strengthening relations based on shared principles of friendship and mutual trust; equality and mutual benefit; coordination; mutual learning; and working together for development.

“Furthermore, the objectives of the Joint Working Group on Cooperation are: to achieve a more equitable trade balance, encouraging trade in manufactured value–added products, increased inward-bound trade and investment Missions; to finalise the working group on trade statistics; to increase investment in South Africa’s manufacturing industry; to promote value-adding and beneficiation activities in close proximity to the source of raw materials; to cooperate and provide mutually beneficial technical support in the areas of the green economy, skills development and industrial financing; and to pursue opportunities to cooperate in infrastructure construction projects such as roads, railways, ports, power generation, airports and housing. The overall aim of South Africa’s approach is to use this mechanism to address inequality, poverty and unemployment, through enhancing our bilateral economic relations.”

In case any readers have not been following developments, or haven’t visited one of the dozens of China malls recently, it might be useful to note right about now that China has become South Africa’s largest international trade partner (save for all of the EU nations as a group) and an influential investment source to boot. It might not be a huge leap to see in all this yet one more example of China’s fierce efforts to minimize the recognition of the Dalai Lama’s world stature or to allow even the faintest sympathy for Tibet’s current predicament. China maintains dark suspicions about the Dalai Lama’s position on Tibetan independence, even though he has repeatedly stated he is not a proponent of independence from China – a nation that has, historically, often – but not always – been sovereign over Tibet.

Actually, it is not quite fair to say the SA government actually refused to issue a visa to the Tibetan leader. Rather, according to evening news reports, the Dalai Lama’s visa application was withdrawn after his office was told informally to the effect that pigs would have to be clocked flying at near-supersonic speeds before the Tibetan religious figure received a visa. The Dalai Lama’s representative in South Africa, Nangsa Choedon, told the media that DIRCO officials had phoned her office to inform her that the Dalai Lama was not going to receive a visa – although they had not yet received written confirmation of this.  As a result, Choedon said, “For now the Dalai Lama has decided to cancel his trip to South Africa.”

In reply to these comments, DIRCO spokesperson Clayson Monyela has been quoted on radio broadcasts saying DIRCO could not be held responsible for events if someone withdrew their visa application – presumably before it was refused. (Well, actually, DIRCO didn’t say anything about flying mammals, but apparently they did have something to say about flying Lamas.) As a result, this event has now been the third time in five years the Dalai Lama has been frustrated in his efforts to obtain a visa for South Africa.

Now, in response to this, there is yet another complication in the planning for this glitzy gathering. The Cape Times has reported that a number of other Nobel Peace laureates have conveyed to Archbishop Tutu their intention not come either, if the Dalai Lama was not permitted to enter South Africa for the event. The foundations representing the four South African Peace Prize laureates — Anglican Archbishop Emeritus Desmond Tutu, Nelson Mandela, FW de Klerk, and Albert Luthuli have been putting together this year’s summit for Cape Town.

Throughout its history, this annual gathering has hardly been what most would regard as a coven of bomb-throwing anarchists plotting global revolution or a secret committee of rapacious capitalists plotting to take over the world. Rather, its partnering organizations encompass worthy folks like the Gorbachev Foundation, the Lech Walesa Institute Foundation, the FW de Klerk Foundation, the Yunus Centre (the group that promotes the work of micro-lending pioneer Muhammad Yunus), the City of Peace for Children of the World (promoted by Northern Irish laureate Betty Williams), the American Friends Service Committee, International Physicians for the Prevention of Nuclear War, the International Peace Bureau (the 1910 recipient of a Peace Prize), and the Albert Schweitzer Institute. The Japanese car manufacturer, Mazda, is a prime underwriter of these chinwags, and it says its corporate ethos explicitly supports world peace efforts – and, just by the way, Mazda is headquartered in the city of Hiroshima.

And, of course, inevitably, stepping right up there to take a swing, a DA spokesman, MP Stevens Mokgalapa questioned the rationale of the SA government in declining to issue the Dalai Lama’s visa. Mokgalapa noted, “The South African government showed no regard for visa regulations when hundreds of guests of. . . Zuma’s ally, the Gupta family, landed at Waterkloof Air Force Base in 2013.” Inevitably, too, there will be comparisons drawn to how Robert Mugabe and his aides are treated in South Africa, or perhaps even to how Lesotho’s Paul Tabane’s circumstances are being treated.

The larger point, of course, is about the nature and conduct of South Africa’s foreign policy. Back in the early 1990s, the late Nelson Mandela had argued forcibly for what was termed a highly moral foreign policy, given the historical and social background to South Africa’s circumstances. It is true that such an approach took something of a beating in South Africa’s efforts to draw together international disapproval of General Sani Abacha’s regime in Nigeria. But the government has continued to at least give lip service to such ideals in many circumstances, even if they have often been ignored in practice when dealing with other situations – not unlike other nations.

Increasingly, however, that element of foreign policy has been overwhelmed by presumably more parochial commercial concerns. One of the academics originally involved in formulating the formal basis for that moral foreign policy stance, Peter Vale, commented, that in thinking about the refusal yet again to allow the Dalai Lama to enter South Africa, “it’s the continuing failure to live up to the high hopes of two decades ago. The deeper question is this: what is Jacob Zuma’s foreign policy? Does anybody know? Can anybody explain it?” In snubbing the Dalai Lama (and presumably tugging a forelock towards Beijing in the process), questions like Vale’s just beg to be answered. DM

Photo: The Dalai Lama, the spiritual leader of the Tibetans, gestures during the event ‘To master life through training the mind’ in Hamburg, Germany, 25 August 2014. The Dalai Lama is visiting Hamburg until 26 August. EPA/DANIEL BOCKWOLDT