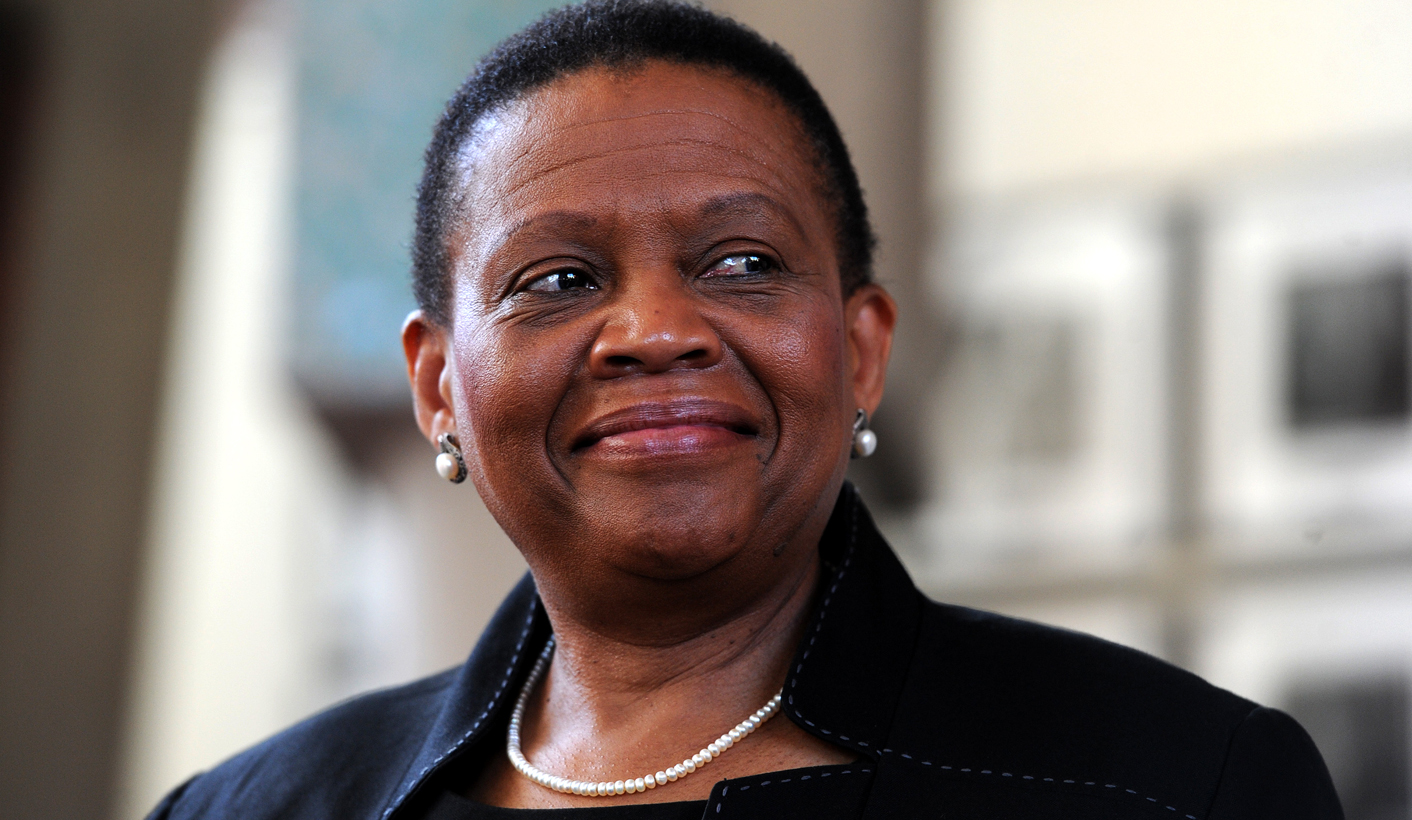 Pansy Tlakula had an impeccable career and was one of South Africa’s great success stories of women from humble beginnings scaling to great heights. She was not the kind of public figure who had been constantly chased by scandal and poor performance. She was an achiever and aimed for excellence. But Tlakula conducted herself really badly on the Independent Electoral Commission headquarters lease deal, and then undertook a protracted battle to evade responsibility for it. She had to go, and now she has finally stepped down as the commission’s chairperson. It should not have ended this way. By RANJENI MUNUSAMY.

It is perhaps a great irony that Public Protector Thuli Madonsela was one of the people who recommended Pansy Tlakula for the position of Independent Electoral Commission (IEC) chairperson in 2011. Madonsela was on a committee headed by Chief Justice Mogoeng Mogoeng that recommended that Tlakula, who up to then had served as the IEC’s chief electoral officer, to take over from Brigalia Bam.

Tlakula was an obvious choice. On her watch as chief electoral officer, South Africa had four well-managed elections – two national and two for local government. The IEC had earned a reputation as one of the country’s top performing bodies, and there has never been any doubt about the credibility of South Africa’s electoral system. Considering this country’s past, and the fact that the vast majority of people were denied voting rights, the integrity of elections should never be questioned no matter how muddy the political terrain gets. Tlakula and her team had ensured that.

In the statement announcing Tlakula’s appointment in November 2011, together with other members of the commission Terry Tselane, Bongani Finca and Raenette Taljaard, President Jacob Zuma said the IEC had “developed a reputation for being an efficiently run organisation, whose advice has been sought by countries in the continent and beyond”. “The Commission has made South Africa proud for delivering free and fair elections without fail, since the advent of democracy in 1994,” Zuma said.

Prior to joining the IEC, Tlakula had served in the South African Human Rights Commission for six years. Her previous positions included chairing the board of the National Credit Regulator and national director of the Black Lawyers Association. She has an impressive set of qualifications to boot, including an LLM degree from Harvard University.

The irony is that after recommending Tlakula for the position and just a few weeks before Zuma confirmed the appointment, Madonsela found on her desk a complaint from United Democratic Movement leader Bantu Holomisa alleging irregularities in the procurement of the Riverside Office Park in Centurion as the IEC head office. Among the things Madonsela then had to investigate was a conflict interest between Tlakula and her business partner, ANC Member of Parliament Thaba Mufamadi, who was also a shareholder in the company awarded the contract for the Riverside Office Park leased accommodation.

In August last year, Madonsela released her report “Inappropriate Moves” on the R320 million IEC lease investigation. She recommended that the Speaker of Parliament consider what action should be taken against Tlakula for her role in the procurement “in light of the undisclosed and unmanaged conflict of interest and her contravention of the procurement laws and prescripts”.

And thus began Tlakula’s long and futile battle to keep her job. She hit back at Madonsela’s report in a 55-page response, claiming that the Public Protector did not have the power to investigate the allegations against her, or refer the matter to the Speaker of Parliament to take action. She said while the Public Protector Act gave Madonsela the power to investigate maladministration in government, the IEC, while being an organ of state, “does not form part of government”.

This left Parliament in a quandary about how to deal with the matter. But then the National Treasury conducted a forensic investigation into the procurement, which found that the procurement was neither fair, transparent nor cost-effective. The Treasury found that Tlakula did not give guidance nor inform people what was expected of them in the process.

Before the May elections, five political parties, the UDM, African Christian Democratic Party, the Congress of the People, Agang SA, and the Economic Freedom Fighters brought an application in the Electoral Court that Tlakula was not fit to stay in office. Tlakula was able to stay in her position and preside over the May 7 elections, but on June 18, the Electoral Court ruled that Tlakula’s misconduct warranted her removal from office.

But Tlakula decided to fight on. She requested that the president grant her a leave of absence until the legal route on her fitness for office was complete. She took the matter to the Constitutional Court, arguing that the Electoral Court had erred in its judgment. Tlakula denied that she was guilty of misconduct and that her relationship with Mufamadi constituted misconduct.

It was her final shot at rescuing her job and salvaging her reputation. It bombed out. The Constitutional Court dismissed her application for an appeal.

The writing was on the wall for Tlakula. She had the option of subjecting herself through the parliamentary of process of implementing the Electoral Court’s recommendation that she be removed from her position. Instead, she decided to make the jump herself and resigned.

Tlakula had received some sympathy, particularly in ANC circles, because there was never any proof that she benefited personally from the lease deal. She had just “adjusted” the playing field so that a comrade and her business partner was able to benefit. In the general scheme of things, it seems not to be a serious offence, her sympathisers argue. It is common for rules and procedures to be bent to favour comrades in business, they say. And Madonsela tends to “overdo” things when it comes to the big fish.

It is this type of rationality that has caused politics in South Africa to become a cesspool of corruption. But they would rather see Madonsela as the enemy than blame public officials for using their positions of power to benefit themselves and the politically connected.

A month after she released the IEC report, Madonsela told Daily Maverick in an interview how difficult it was for her to expose other people’s failings. She spoke of how one person broke down in tears due to the findings against her. Madonsela would not say if that person was Tlakula.

“I also had to go to the bathroom and cry for the person. No normal person can celebrate the pain of other people. I’d like to believe I am not bitter and twisted.”

It is a tragic end to Tlakula’s public life and no person should celebrate such an inglorious end to an outstanding career. In an interview with Leadership magazine earlier this year, Tlakula said: “I had the privilege of serving my country and continent in various capacities and I’m beginning to wind down my career. I’m looking forward to the day when I will concentrate on things that I like doing and not things that I have to do.”

The thing is, Tlakula really did like what she was doing at the IEC. A look at her in the hot seat at the IEC national results centre during the May elections period showed just how much she enjoyed it. She was presiding over a complicated and massive operation and she loved the fact that it worked. She loved that she got to tell the world how South Africa voted.

Tlakula came from a township called Evaton in the Vaal, where there was no electricity, no water and there were only pit latrines when she was growing up. She rose to be a powerful woman heading one of the most important bodies in the country. She had everything going for her. She lost it because she became infected with the sickness that inflicts so many in public office – the temptation to abuse her position.

And then, like so many others, she attempted every possible route to avoid taking responsibility for her misconduct. Perhaps if Tlakula had been in some municipality or provincial entity below the radar, her misconduct might not have been revealed at all.

For this country to have a future, we need to believe that our democracy works today. Tlakula was in a position that required South Africa to trust her completely. She had to be like Caesar’s wife, beyond reproach. She was not. She betrayed herself and she betrayed South Africa. Was it really worth it? DM

Photo: IEC chairwoman Pansy Tlakula is seen at the hand-over ceremony of the lists of names of party representatives for Parliament and provincial legislatures at the Constitutional Court in Johannesburg on Friday, 16 May 2014. Picture: Werner Beukes/SAPA