‘Miners Shot Down’: Still the film every South African should see 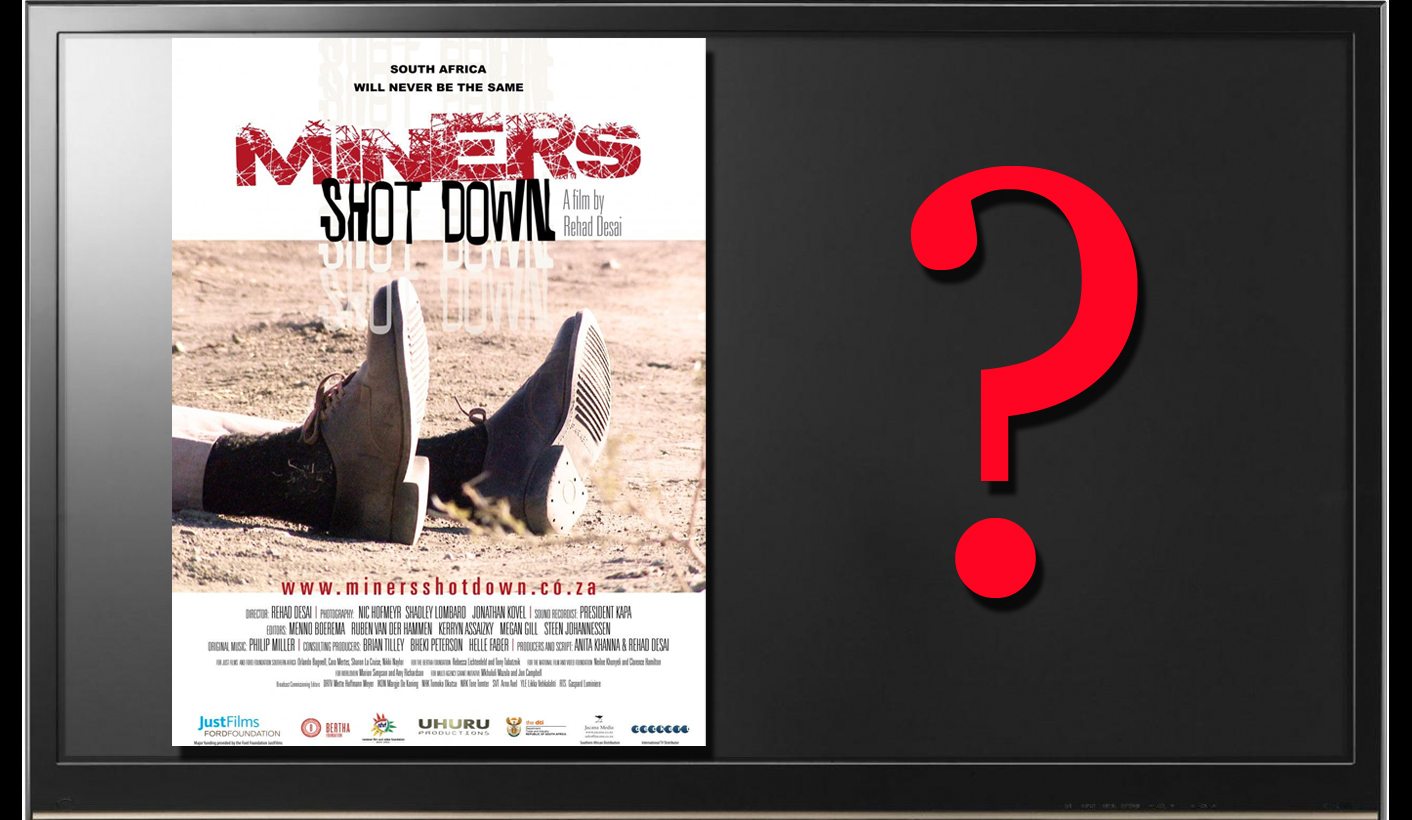 A campaign has been launched to get Marikana documentary ‘Miners Shot Down’ aired on free-to-air TV. Despite, or maybe because of, the shocking portrayal of events and broader reasons for the massacre, it’s unlikely those without DStv will see the documentary soon. GREG NICOLSON looks into the situation.

The deaths of the mineworkers – of everyone involved – were horrifying, disgusting, horrendous and despicable, but that’s not why you cry. You’ve seen that before. You cry for the death of hope, the idea that South Africa was supposed to change, and it has, but not enough. You cry because of what these mineworkers represent – black South Africans who deserved better after 1994, who hoped the spirit of the Struggle would bring equality when it came into government, who hoped racism would end, who hoped they could put bread on the table and give their children the opportunities they didn’t have, but whose hopes have been sacrificed to Apartheid’s legacy, the devil who makes the past the present and future ­– the political, social and economic beast that survives to oppress. That’s why you cry. And because the mineworkers were the ones brave enough to stand up to the beast.

Since its public release earlier this year, Rehad Desai’s haunting documentary Miners Shot Down, looking at the six days to the Marikana Massacre on 16 August 2012, has received both critical acclaim and made a strong impact on viewers. The audience, however, has been limited to those who can visit a few select cinemas or viewers lucky enough to attend a preview screening. It’s now up on YouTube, but not everyone has the funds to stream an 86-minute feature.

Social justice organisation Amandla.mobi has launched a campaign to make the documentary accessible to the wide range of South Africans who watch SABC 1, 2 and 3 and e.tv. They want it aired on 16 August, the two-year anniversary of the killings. They particularly want this documentary aired because those who have seen it describe it as a life-changing experience.

Amandla campaigner Koketso Moeti says Marikana was the first post-apartheid massacre, but two years later the public still knows little about what happened. “If people don’t know all these bits of information assisting us to make an informed decision … it sort of messes with our ability to make informed choices about the kind of South Africa we want,” says Moeti.

The organisation Amandla.mobi is an experiment. Launching its first campaign in June, the independent group has already proved to be a useful platform for organising on issues of social justice and governance. “Turning every cellphone into a democracy-building tool,” says campaigner Paul Mason on Amandla’s aim.

The group launches campaigns across different channels in order to reach the widest range of people. For example, you can sign the Miners Shot Down petition on Amandla.mobi; those without smartphones can get involved through the USSD code *120*4729# (similar to loading airtime); and those with feature phones can engage with the campaign on Mxit. Using multiple channels to connect allows those most affected by issues to mobilise support from outside their networks and communities. Amandla provides access to its campaigns in multiple languages and has recently pushed for an independent investigation into allegations that workers were shot at Sun City and for Joburg Metro Cops to serve in soup kitchens instead of taking blankets from the homeless.

The Amandla team decided to push Miners Shot Down after reading a quote from Matsepang Ntsenyeho, wife of Andries Ntsenyeho, who was killed at the “small koppie” where police are accused of massacring defenceless miners. “I think it’s important that the story of the massacre be shown on TV so that people can be educated about what happened and for everyone around the world to know what happened at Marikana,” said Matsepang after a screening of Miners Shot Down. “Our husbands died unexpectedly. They never got sick, they were killed. They were the providers in our homes because as wives we are unemployed. I want the movie to be shown on TV because most people have access to TV and we all watch SABC and e.tv, especially e.tv.”

The Amandla group spoke to Desai and some of the families of the deceased and agreed that one of the key issues relating to the massacre is informing the public about what happened.

“It’s not about forcing people to think a particular way,” said Moeti. It’s about giving the public information on what happened so they can make up their own minds. “At some point, these are our fathers, our brothers. We have to engage with what happened.” So far, the online petition has 176 signatures but that’s set to increase once the campaign is pushed on Mxit and the USSD line.

Desai’s documentary is infused with activism and he is heavily involved with the Marikana Support Campaign. The Miners Shot Down website includes a “take action” page urging viewers to donate to the families of the killed miners, organise a march on the 16th, screen the film and get trade union branches to pass a resolution supporting the mineworkers. Part of the proceeds from screenings has gone to supporting mineworkers and their families.

Desai’s activism, however, doesn’t sacrifice the information included in the film or its impact. The documentary offers a succinct account of what happened in August 2012 and explains the confluence of social, economic and political factors that created an environment for the mining unrest and the police response. Miners Shot Down has been aired by Al Jazeera and on DStv. It has won Best South African Documentary at the recent Durban Film Festival, the Camera Justitia Award at the Movies that Matter Festival in The Hague, and the Václav Havel Jury Award at the One World documentary film festival in Belgium for its defence of human rights.

Showing the film on e.tv and SABC would reach a much larger audience. The e.tv says its terrestrial signal reaches 80.5% of the population, with 69% of its audience being black. Desai said he discussed airing the documentary on e.tv weeks ago with the channel but they declined his offer and said they already had similar programmes. E.tv head of channels Monde Twala said on Monday they received a proposal to air Miners Shot Down “but we could not reach a suitable commercial agreement”. (Desai says no terms were even offered.) Twala referred to the Marikana coverage from e.tv and eNCA, specifically the documentary Through the Lens: The Marikana Massacre, aired around the first anniversary of the killings last year. While a welcome respite from the lack of broader coverage on the killings, it pales in comparison in both the impact and information provided by Desai’s work.

But Twala said e.tv’s Marikana focus can’t be criticised simply because it hasn’t aired Miners Shot Down. Twala said the issue gets abundant airtime and eNCA broadcasts the Marikana Commission at its own cost, freely available for all. “Rehad Desai’s documentary is just one of many produced on this topic. The fact that we did not air his documentary does not mean that the Marikana story has not received prominence on our platforms,” said Twala. “Our commitment to telling the Marikana story cannot be questioned on the basis of a single documentary we were not able to broadcast.”

SABC’s advertising website claims the public broadcaster’s three TV channels have a weekly audience of over 30 million people and states that 86% of adults in South Africa watch SABC TV. SABC’s new head of genre, Emily Wellington, whose team looks at content and recommends it to the channels, was positive about Miners Shot Down. “We’ve decided we like it and we’ve handed it over to SABC2 and it’s their decision,” she said. SABC spokesperson Kaizer Kanyago didn’t respond to questions on Monday but Desai said he’d given the documentary to them in January but he was told there aren’t available slots to play it until 2015 – and someone still has to make the final decision on whether to air it. Because Miners Shot Down implicates state officials, it clearly has to get the approval of the bosses if it’s to be aired, Desai suggested.

He said documentaries could have a strong impact on society, as proven by the Filmmakers Against Racism series on SABC, which had a “huge response”. If broadcast on the free-to-air stations, he believes Miners Shot Down would strengthen the campaign to have the charges against the arrested mineworkers dropped and hold those responsible for the killings to account. It would counter the narrative, he says, which the public are fed, that the miners must have done something wrong to cause their own deaths. While many worry the Marikana Commission of Inquiry could be a whitewash, Desai believes his documentary, if widely seen, could spur people into taking action and demanding accountability.

His work is one of the most important, probably the most important, accounts on film of what happened in Marikana and why it matters to South Africa. Sadly, it seems unlikely that it will be shown to those of us who can’t afford DStv; those most likely to relate. DM