In a world in turmoil, is South Africa finally growing up? 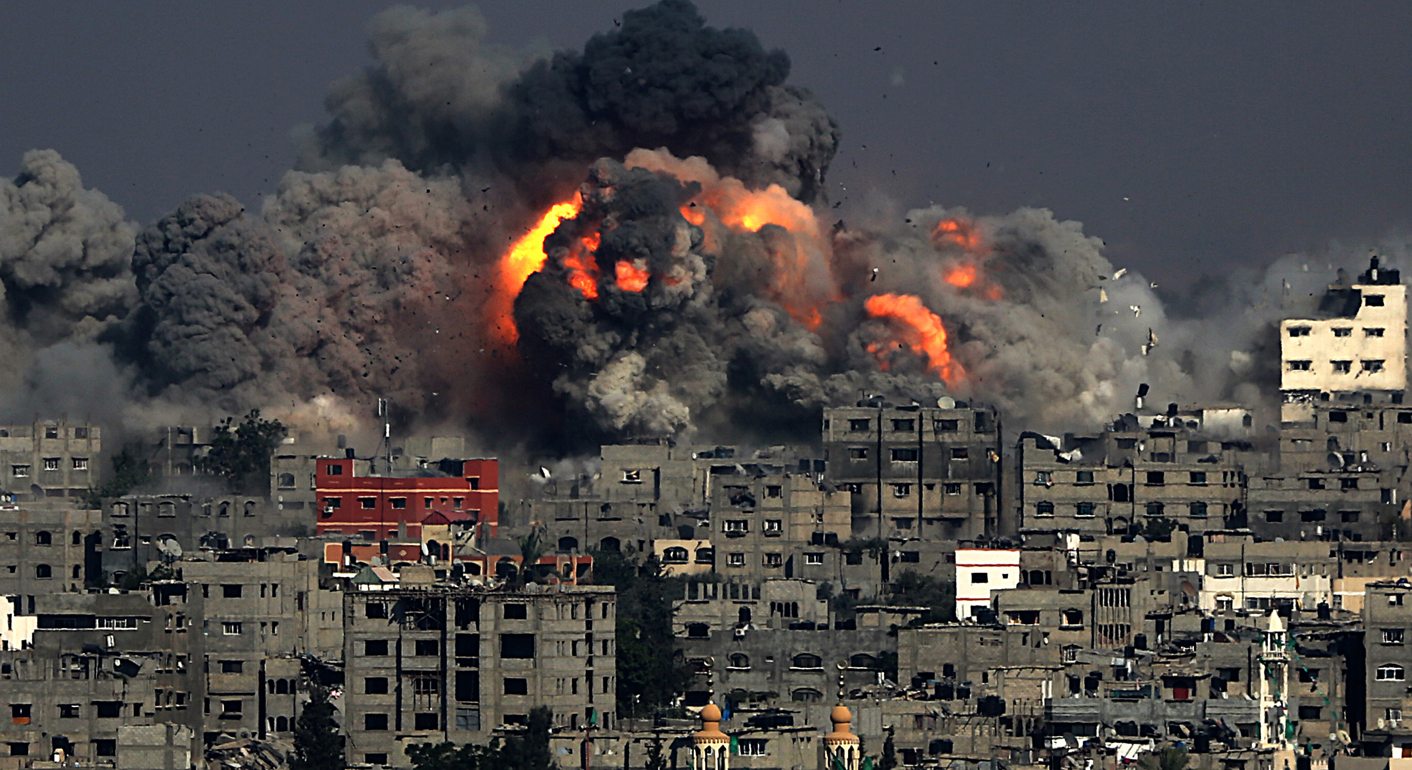 The worst outbreak of the Ebola virus, multiple airline crashes, deadly conflicts in several parts of the world and the massive loss of life and growing humanitarian crisis in Gaza as the Israeli bombardment continues unabated – the world is rather terrifying right now. For the past few weeks, as the news agenda has been dominated by death and destruction in other parts of the world, the usual South African pastime of whingeing has subsided somewhat. While crime and economic woes are still troubling, in the context of global security being extremely vulnerable, we might be a little more appreciative of our political transition and relative stability at present. By RANJENI MUNUSAMY.

On Wednesday, Auditor-General Kimi Makwetu released the municipal audit results for the 2012-2013 financial year. Though registering a slight improvement compared to the previous year, the results reflected the appalling state of local government, particularly in financial management. Only 22 out of the country’s 278 municipalities and eight out of 62 municipal entities received clean audits – just 9% compared to 5% the previous year.

Out of a total expenditure of R268 billion, the Auditor-General found unauthorised expenditure amounting to R9 billion and R11 billion in irregular expenditure. A further R815 million of fruitless and wasteful expenditure was recorded.

In his statement, Makwetu said 90% of the auditees had findings on compliance with laws and regulations, many of which related to the area of supply chain management. “Irregular expenditure was reported at 265 auditees (83%), mainly due to the lack of basic controls and inadequate implementation of appropriate consequences where there has been poor performance or transgressions.”

He said the value of these controls could not be emphasised enough as “they are an important mechanism to narrow the space for widespread abuse of the public resources that are required to provide services to citizens”.

The audit results are the best indicator of why the performance of municipalities is so poor and why so many of them fail at the core function of service delivery. South Africa is constantly beset with protest action over service delivery and breakdown of essential services due to dysfunctional municipalities. In 2009, government had set a deadline to achieve universal clean audits by this year. The target has been missed by 90%.

Such a devastating diagnosis of the state of local government by the Auditor-General should have been one of the main talking points in the country. It was not. There has not been the usual shrill reaction when government failures are exposed.

This could perhaps be because of the slight improvement in clean audits. Or it could be because people are numb to another bad news story about the state of South Africa. It could also be that, as compared to the sheer horror playing out in other parts of the world, poor financial management in local government does not look so bad.

Events around the world over the past few weeks may have put South Africa’s problems in perspective. From the Malaysian passenger plane being shot down by a surface-to-air missile over Eastern Ukraine, to the latest bout of warfare in the Middle East that has killed over 1,400 Palestinians, the horror of human suffering and tragedy has dominated the news agenda. These, together with ongoing conflict in Sudan, Syria, Iraq, Libya and Nigeria has undermined global security. To add to the sense of fear, a number of West African countries are in lockdown after the deadliest outbreak of Ebola in history. The highly infectious disease has a fatality rate of up to 90% and over 700 people have already died from the outbreak.

Dr Saths Cooper, president of the International Union of Psychological Science, says that as the news agenda remains dominated by these dreadful events, South Africans are perhaps less preoccupied with the country’s problems than normal. “People here may be thinking that things look worse elsewhere, especially when confronted with the unremitting suffering in Gaza.”

“The extent of the humanitarian crisis there has touched us. There are no words to describe the horror of the incessant bombing. The sheer level of atrocity, with even UN shelters, facilities and schools being targeted, has seen people rise above narrow ethnicity and religiosity in sympathy with the great level of human suffering,” Cooper said.

The long-running Middle East conflict is a polarising issue the world over. The latest outbreak of violence has been particularly emotive because of the large number of civilians killed, especially children. Shocking pictures of the dead and dying, and grief-stricken survivors have gone around the world. Images of Gaza’s bombed towns and cities, now mounds of rubble, bear testament to the disproportionate force being employed by the Israeli military to counter the rockets being fired by Hamas. More than 200,000 of the 1.8 million Palestinians living in Gaza have been displaced, and electricity and water supplies have been crippled.

The conflict has seen a rise of anti-Semitism as anti-war protests and Palestinian support campaigns are occurring around the world. Even in the United States, Israel’s most powerful ally, there has been hacking and defacing of Jewish websites and a Florida synagogue was vandalised. While several countries in South America have cut diplomatic ties with Israel, protests, some of them violent, have been raging in Europe demanding stronger action from governments to stop the conflict.

In comparison, South Africa has been measured in its response. President Jacob Zuma appointed former deputy foreign affairs minister Aziz Pahad and former high commissioner in the United Kingdom Zola Skweyiya as special envoys to the Middle East. At a media briefing in Cape Town to report on their mediation efforts, Pahad and Skweyiya said they met with Palestinian and Israeli officials, as well as civil society representatives to convey the South African government concern about the situation and urge an unconditional ceasefire. They will now be travelling to Egypt, Qatar and Iran to interact with the governments there, and will also be meeting Hamas leaders.

Meanwhile, disaster relief organisation Gift of the Givers is preparing to travel to Gaza to assist with relief efforts. On Wednesday, ANC leaders met with the South African Jewish Board of Deputies and the South African Zionist Federation on perceived anti-Semitic statements made by ANC and ANC Youth League, as well as to discuss the situation in Gaza.

The ANC secretary general Gwede Mantashe said in a statement that it re-affirmed its “unequivocal condemnation of any form of hate speech including anti-Semitism”. “Strong and legitimate criticism of the Israeli government for their policies and actions, including their ongoing slaughter of the Palestinian people, should never degenerate to anti-Semitism.”

“The Palestinian people are the victims of the conflict. The ANC will continue to call for the withdrawal of Israeli troops in Gaza and the urgent resumption of negotiations to find a lasting solution to the occupation of Palestine by Israel,” Mantashe said.

While there has been strong condemnation against Israel from political organisations and civil society in South Africa, with demonstrations and protests in the country’s major cities, there has not been violent clashes as seen in other parts of the world. A group of South African Jews are running an online petition they intend sending to Israeli Prime Minister Benjamin Netanyahu condemning the assault on Gaza and killing of civilians.

Cooper said the fact the South Africa experienced violence and atrocities in the past gives its citizens perspective and understanding of human suffering. “One of the wrong extrapolations is that this is a Muslim-Jewish issue. Not all Palestinians are Muslim. This is not a simple cut and dried issue. People here should steer clear of bringing it into the mosques, synagogues and churches. We should not be importing other conflicts into our country, breeding a cycle of hate and violence,” Cooper said.

We have tended to be our own worst enemy as South Africans, Cooper says, constantly fault-finding and disinclined to give credit where it is due. While the country has been scandal plagued, beleaguered by protest action and strikes, and fatigued by corruption, most institutions are working and the wheels are turning.

Cooper says there is sometimes a lack of grace in the nature of South Africans to appreciate that some things in the country actually do work. He said the Oscar Pistorius trial had demonstrated to the world that South Africa has a credible justice system. The May elections also affirmed the credibility of South Africa’s electoral system and the strength of democracy, even though the was a shadow over the head of the chief executive of the Independent Electoral Commission.

Perhaps it takes a world in turmoil to show that while South Africa is a country with multiple and complex problems, it is still a functioning democracy. The Constitution guards us from horrors being experienced in other parts of the world and gives us platforms to express our objections and disapproval when things go wrong.

South Africa’s peaceful transition remains a model for conflict resolution, and sometimes it takes the unthinkable suffering of others to remind ourselves where we come from and why we should protect what we have now. DM