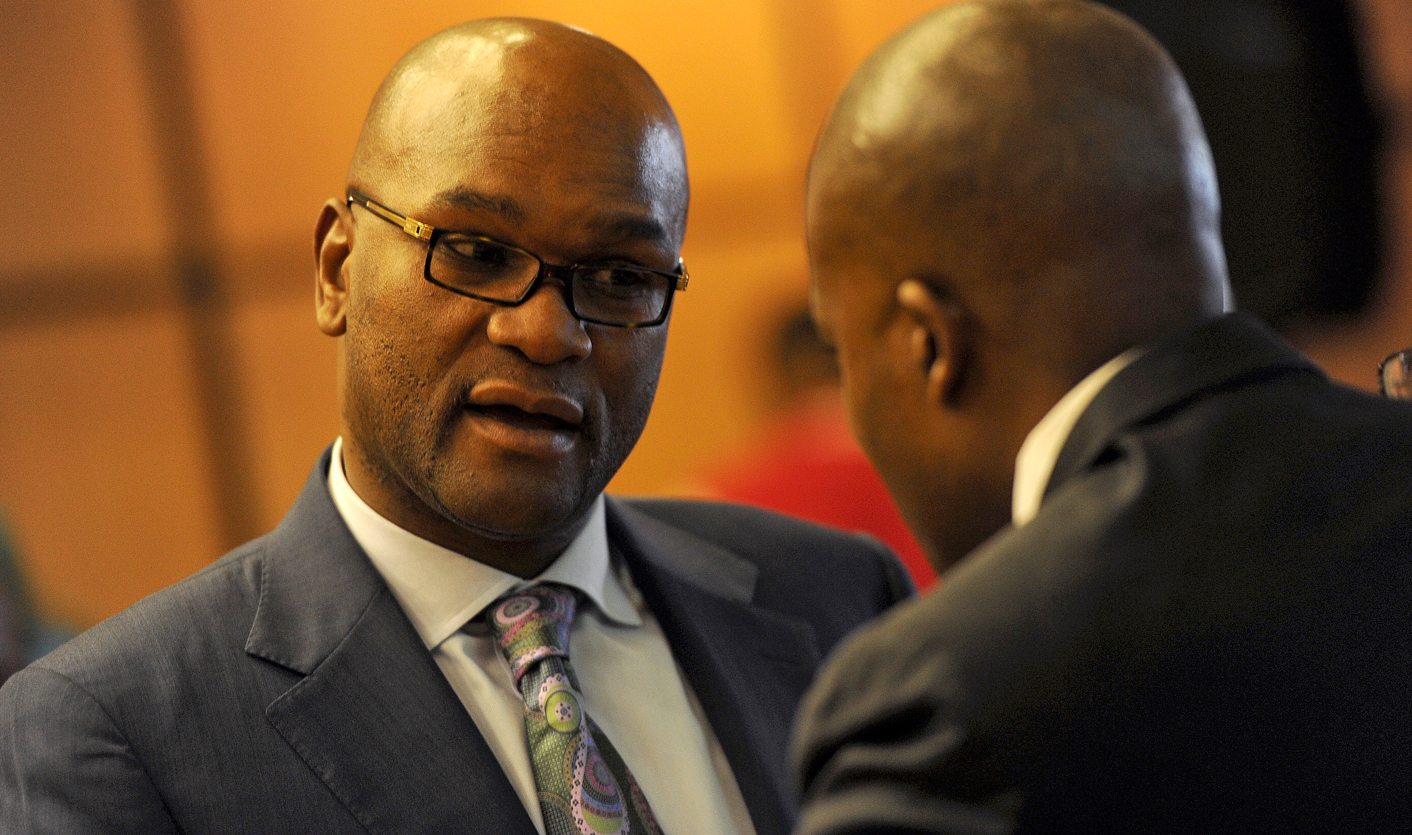 Former Police minister Nathi Mthethwa appeared for his second and final day at the Marikana Commission of Inquiry on Tuesday. In the tense, frenetic-paced cross-examinations he was accused of exerting political influence on the operations of the police, lying to the Commission, and failing to provide leadership and accountability. Mthethwa, of course, denied the allegations. GREG NICOLSON reports.

Representing the families of the killed mineworkers, Advocate Dumisa Ntsebeza started where Monday’s cross-examination ended. He presented a video of Mthethwa congratulating police in Marikana on 17 August 2012 for their courage, bravery, and nation-building efforts. Mthethwa, who is now arts and culture minister but was police minister at the time, said the state must “do everything in our power so that anarchists do not think that South Africa is their stage. As your minister I want to thank you from the bottom of my heart.”

Ntsebeza said Mthethwa’s remarks made it seem that the actions of the police were justified because the protesters were “running amok”, ignoring the fact that SAPS officers had also killed 37 people throughout the week. What the family members of the dead miners want to hear, he said, is the ANC government categorise Marikana in the same way as Sharpeville and Bisho.

“All of those massacres, because they were called by that name, and I’m sure by you and even the ANC were described as such because the view was that nothing, nothing at all can ever justify the mowing down of citizens in that fashion,” said Ntsebeza. Mthethwa vaguely agreed and said this government instituted an inquiry to deal with the tragedy, unlike the apartheid government.

In his cross-examination, Advocate Dali Mpofu, representing the injured and arrested mineworkers, wouldn’t let him off easily. He wanted the minister to apologise. “I agree with you that remorse has to be shown and to express that especially on those people who died and at any time I don’t think that we would have a problem with that because one life is one too many,” said Mthethwa. “Just to remind you that the inter-ministerial committee went to Marikaina and apologised on what happened and that happened. Actually ministers apologised, but if it has to be said again because we said it’s not something that was supposed to happen under our democratic dispensation because we said we are apologising for what happened there.”

But Mpofu wanted more than remorse from the minister, hounding him on accusations of politically influencing the police operation in Marikana. “Right now you are talking in the dark. You don’t even know what you are talking about,” Mthethwa told him.

“You are the only one in the dark,” sneered Mpofu.

“There was no pressure that was put either to me or anyone else who was working under my leadership,” said Mthethwa, right back at him. Marikana Commission chairman Ian Farlam intervened, “Let’s not get excited. Let’s bring the pressure down.”

Mpofu accused Mthethwa of being involved in a chain of political pressure that involved Deputy President and former Lonmin board member Cyril Ramaphosa, Women’s Minister and former Mineral Resources Minister Susan Shabangu, National Police Commissioner Riah Phiyega and North West Police Commissioner Zukiswa Mbombo and led to the shootings on 16 August 2012. It started when Ramaphosa called Mthethwa on 12 August. He told the police minister what was happening in Marikana was beyond industrial action and policing needed to be increased. Mthethwa then called Mbombo, who later told Lonmin executives there was political pressure influencing the sitation.

Mthethwa denied he relayed that pressure to operation policing commanders, like Mbombo, but evidence suggests it happened. Mpofu pointed out that in his first statement to the Commission, Mthethwa did not mention his call to Mbombo on 12 August, even though it was out of the ordinary.

“You were the conduit through which the political pressure from Mr Ramaphosa was transmitted from General Mbombo and was transmitted to the killers,” said Mpofu. “You were the intermediary or conduit for which the pressure that Mr Ramaphosa refers to […] was conveyed to the senior operational management of the police and ultimately those police that killed 34 people on the 16th.”

Supporting his claims, Mpofu cited an email from Ramaphosa to Lonmin executives calling for continued pressure on the government officials to act “correctly”. Evidence at the Commission shows Shabangu told Ramaphosa she would brief President Jacob Zuma and Mthethwa and get them to act more pointedly to deal with the situation. Mthethwa denies ever talking to Shabangu or Zuma about the situation before the killings on 16 August.

“You knew very well that by mentioning the name of the caller it would achieve your intended purpose which was to transmit the pressure towards the operational management,” said Mpofu to Mthethwa on the phone call he made to Mbombo. Mthethwa saw no conflict of interest in his realying the concerns of Ramaphosa and National Union of Mineworkers then President Senzeni Zokwana to the police. He would have done the same for anyone, he suggested. Mpofu wants Mthethwa along with other political heavyweights to be charged with murder.

It’s unlikely there was sufficient evidence to prove the former police minister’s actions led to the killings – Mbombo’s evidence sought to vindicate him while Ramaphosa will give his testimony at the end of July – but the cross-examinations cast Mthethwa in a bad light.

Association of Mineworkers and Construction Industry counsel Heidi Barnes said he knew of the decision to move the disperse and disarm plan into the tactical phase, a claim Mthethwa has consistently denied. She started with Phiyega’s disputed statements, in which she said she would contact the minister to tell him of the plan. The day after that decision was made, Phiyega left a voice recording on the minister’s phone. Barnes said this was her telling him they would move into the next phase of the plan, the one that led to so many deaths. He has consistently denied being told the plan would move into its tactical phase on 16 August. Those are operational details, he said, but Mthethwa claimed there would be nothing particularly wrong if he was informed.

The SA Human Rights Commission Advocate Michelle Le Roux turned to Mthethwa and the police leadership. She presented him with an article on with allegations the arrested protesers had been tortured and he said any police committing such acts should expect to be accountable to the law. Police need to get the right message to ensure they continue to improve standards of service and know they will be held accountable, he said.

“It stands in very marked contrast to the public statements by the SAPS,” Le Roux told him. Despite continually telling the Commission “something terribly wrong took place there” there are no statements from senior SAPS members or politicians suggesting police wrongdoing and that officers could be held accountable, especially since the start of the Commission. In fact, most of the public statements from the police offer blanket support to the officers and condemn the protesters, those killed, as hardcore criminals armed with weapons who have murdered the police. They simply did not set the tone that police officers will be held accountable if guilty of misconduct, as Mthethwa did at least once when he spoke about the torture allegations.

Le Roux also established that nothing is being done by the police to learn from what happened. The Internal Police Investigative Directorate is supposedly on the case. The Marikana Commission is under way, but the police haven’t launched their own initiative to see if there’s any there’s anything they can learn. Mthethwa even seemed shocked at the idea of a “parallel process”.

Mthethwa must have been relieved to finish up at the Commission. On Thursday, it was established that for too long he showed a lack of remorse, he hadn’t given the impression officers would be held accountable, and the allegations that he worked with political players to crack down on the miners at the behest of Ramaphosa keep coming. Those allegations will be further explored when Shabangu and Ramaphosa appear in front of Farlam.

The Commission resumes on Thursday with the continuing cross-examination of police witness Mr X. DM