Numsa strike: It IS about politics, stupid! 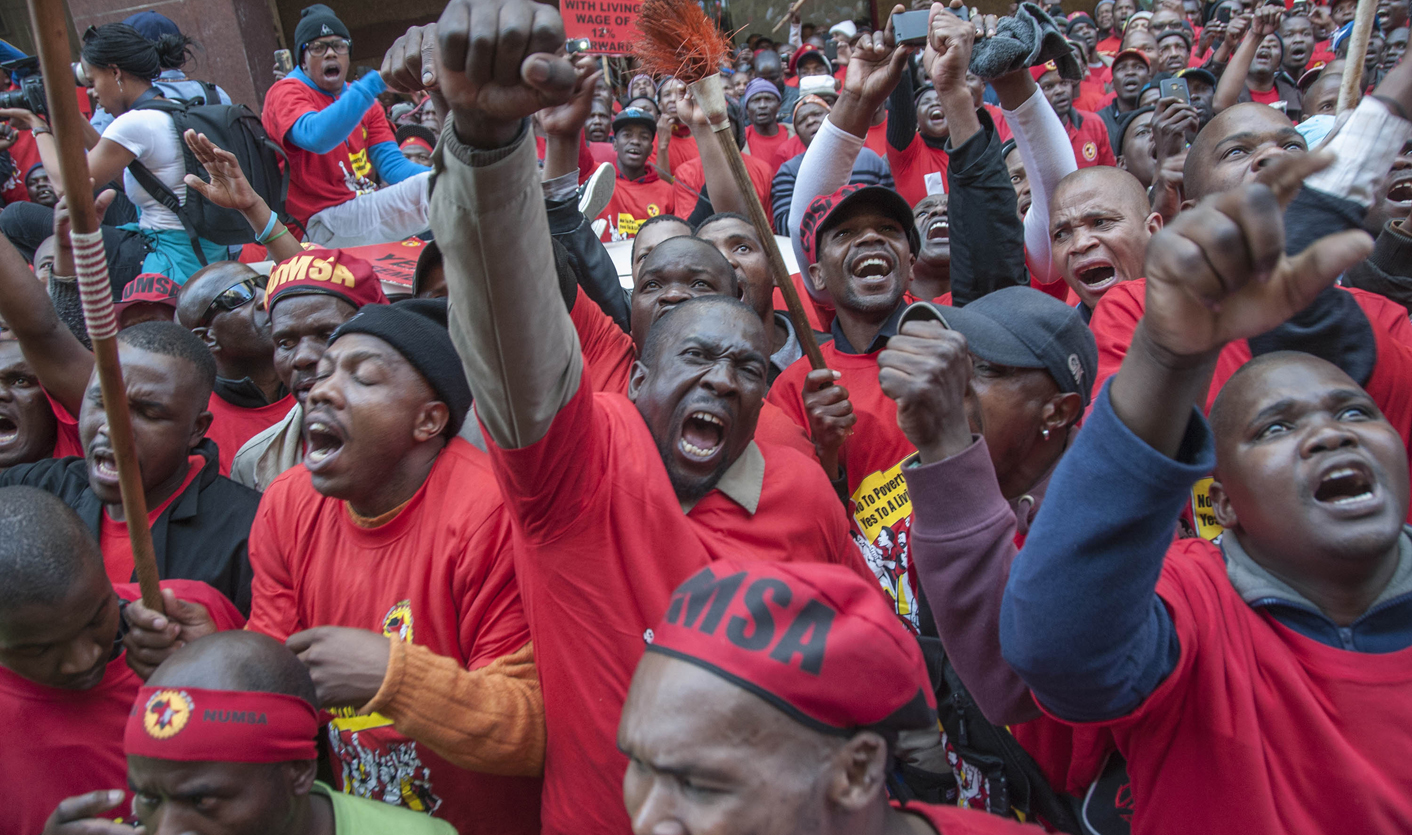 Trust Zwelinzima Vavi to tell it like it is. “A demand for a living wage is political, because it is politics that allowed such conditions 20 years into a democracy,” the Cosatu general secretary said, addressing striking metal workers in Johannesburg on Tuesday. The Numsa strike is complicated as it is not just about wage demands, and therefore reaching a settlement is more than a numbers game. Numsa says the strike is not about “economic sabotage” but its critics claim this is a show of force to open the way for its political agenda. Government is therefore eager that the plug be pulled on the strike before Irvin Jim gets into his stride. By RANJENI MUNUSAMY.

If ever there was a strike that has caused jitters, it is the current one by 220,000 members of the National Union of Metalworkers of South Africa (Numsa) in the metal and engineering sector. It is not only the fact that it takes place so soon after the five-month platinum strike that battered the economy, but also because it involves the militant Numsa, which is quite clearly baying for a big fight.

Numsa has had a big run-up to the strike, including being at the centre of major battles in Cosatu, withdrawing political support for the ANC in the 7 May elections, and announcing its intention to form a United Front, a working class organisation to the left of the ANC. Numsa has become one of the ANC government’s biggest critics, while technically still in alliance with the ruling party as an affiliate of Cosatu.

Following a Numsa central committee meeting in May, the union said the ANC’s reduced percentage and poor performance in the Gauteng province “reflects the reality of the loss of confidence by our people in the neoliberal capitalist ANC”. The union has said there is no turning back from the resolutions taken at its special congress in December, particularly around the formation of a United Front and Movement for Socialism.

“The [central committee] affirmed that there are two legs on which Numsa’s work to build the United Front would stand; gaining support for our campaigns and building our concrete support for other struggles of the working class and the poor wherever and whenever they take place,” the May statement read.

It is therefore difficult to separate the strike from Numsa’s broader agenda. In order to launch a breakaway from the ANC and attract formations on the Left, Numsa has to walk the talk and prove it has the strength to face down government and business. A new political platform hoping to draw mass support cannot be launched in a situation where all is well and everyone is content. The working class formation will be built on anger and disappointment with the ruling party.

Numsa’s critics in the alliance say the union is also hoping to continue to poach members from other unions by being more militant and tough in negotiations with employers. Workers become disillusioned with unions that play along nicely and Numsa’s toughening stance has seen it attract workers from outside its sector, much to the annoyance of other Cosatu unions.

Numsa’s package of demands, presented in a memorandum to the Steel and Engineering Industries Federation of South Africa (SEIFSA) and National Employers Association of South Africa (NEASA), include “a total ban on labour brokers” and “No company in our industry should be allowed to implement the Employment Tax Incentive”. Numsa has lost these battles within the alliance but has now placed them on the bargaining table with employers. This is on top of a 15% wage demand and a housing allowance of “not less than R1,000 per month”.

SEIFSA has said some of the union’s demands appeared to be political. Chief executive office Kaizer Nyatsumba said this was “a battle against the government, but used employers as a proxy”. This has built into conspiracies and paranoia that Numsa was bent on “economic sabotage” by undertaking such a huge strike at a time when the economy is so vulnerable.

Numsa’s leaders have dismissed suggestions that they are intending to send the economy into recession. Numsa president Andrew Chirwa said they had an obligation to ensure a better standard of living for members. “We have no intention to send South Africa into a recession… but workers are permanently living in a recession even today,” Chirwa said.

Speaking at a Numsa march in Durban on Tuesday, Numsa general secretary Irvin Jim said the ANC government had failed to address “an Apartheid colonial wage system” and could no longer expect unions to endorse it every five years. “Numsa is not engaging in economic sabotage. This is a strike. This is about workers fighting for their rights. This is a strike, not a dinner party,” Jim was quoted as saying by City Press.

Numsa is surprisingly supported in the strike by their arch-rivals in Cosatu, the National Union of Mineworkers (NUM) and the National Education, Health and Allied Workers Union (Nehawu).

Nehawu said: “We support their decision to withdraw their labour in demand of fair salary adjustments, improved workers’ benefits and better working conditions. Over the last couple of years, we have witnessed a precipitous decline in the social position of the working class that has been under serious onslaught from monopoly capital… We call on all the workers to unite in rejecting the slavish support for the profit system and condemn the fanatical opposition to worker’s struggles from the economic commentators and the elite.”

This could be an effort to defuse Numsa’s political agenda and pull the strike back to within the ambit of labour issue.

Cosatu general secretary Zwelinzima Vavi, however, is not mincing his words about his interpretation of the strike. He said the country had no “good story to tell”, as the ANC had claimed.

Speaking at the Numsa march in Johannesburg, Vavi said President Jacob Zuma had failed to tell South Africans in his State of the Nation Address how many jobs had been lost in the past five months. “The president said more than 9,000 jobs were created… do you see those jobs? The president failed to tell the country how many jobs were lost. We are sitting with a 36% unemployment rate,” Vavi was quoted by Sapa.

Going for the jugular, Vavi said public money went to upgrading Zuma’s private homestead at Nkandla and that over R300 million was spent in refurbishing ministers’ accommodation.

Vavi said workers could not be blamed for the state of the economy or for being irresponsible by embarking on the strike. “A demand for a living wage is political, because it is politics that allowed such conditions 20 years into a democracy,” Vavi said.

Government is clearly worried about the Numsa strike. Finance Minister Nhlanhla Nene said he hoped for a quick resolution to the strike as the country prepared to stimulate economic growth. He said it would take significant effort to repair South Africa’s weaker economy following the platinum strike.

Labour Minister Mildred Oliphant made an 11th-hour intervention, chairing a meeting between Numsa and employers on Monday in the hope of avoiding the strike. However they failed to reach consensus. She placed hope in another meeting between the two parties on Thursday, saying she hoped there would be a “positive result”.

Even if there is a quick resolution to the strike, Numsa is now playing hardball. They have made it clear that they will pursue their agenda to improve the lot of workers irrespective of the impact on the economy. This strike is merely the opening salvo. With the Numsa leadership at full throttle and Vavi getting back into his stride, the bigger battle is clearly coming. DM

Photo: Thousands of members of the National Union of Metalworkers of South Africa (Numsa), the country’s largest union, take part in a strike action in Johannesburg, South Africa, 01 July 2014. More than 220,000 metal workers have gone on strike throughout the country demanding an increase of 12 percent, nearly double the current inflation rate. EPA/IHSAAN HAFFEJEE