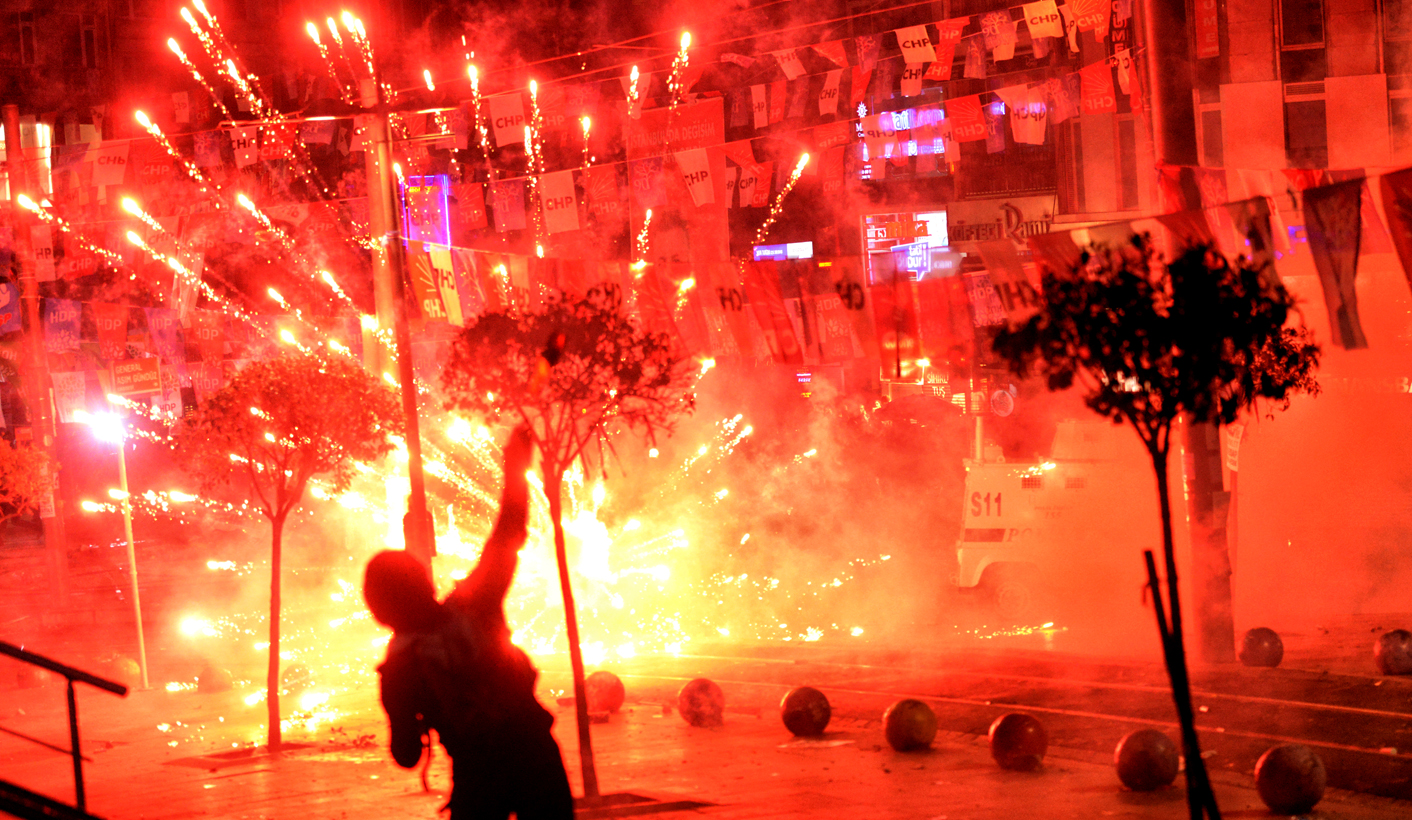 Turkey is a divided nation, and it’s beginning to show. While Prime Minister Recep Tayyip Erdogan still commands a sizeable majority, he’s fast losing allies and alienating important segments of the population. This doesn’t mean he’s going anywhere, anytime soon. It does mean, however, that he won’t have it all his own way. SIMON ALLISON reports from Istanbul.

Gezi Park, in the middle of Istanbul, is a distinctly uninspiring example of urban greenery. At its centre is an ugly concrete fountain, which sometimes works but mostly doesn’t. There are trees dotted around, some nice patches of grass, and a few flowers here and there. A creative gardener has used yellow and white daisies to spell out ‘Istanbul’ in metre-high letters.

Couples canoodle respectfully on the park benches, and old men with comically bushy mustaches sip sweet, bitter tea and play backgammon on the plastic tables of the café. They are unusual: mostly, people don’t go to Gezi Park, they just pass through it, en route to the nearby Taksim Square or metro station.

In a city of breathtaking wonders – the ancient mosques and cathedrals, the Cape Town-rivalling views over the Bosphorus – Gezi Park is not a destination. It is little more than a relaxing short-cut; a brief respite for harried commuters from the hustle and bustle of the city.

At least that’s all it used to be. Things have changed – for Gezi Park, for Istanbul, and for a Turkey that is struggling to carve out a new identity for itself in the 21st century.

It was in May last year that the government revealed plans to bulldoze the park and replace it with yet another shopping mall. Istanbullular, the people of Istanbul, weren’t happy. Unremarkable Gezi Park may be, but it’s the only patch of green that remains in the city’s centre. Small protests against the plans attracted more and more people, until tens of thousands were packed into Gezi Park and its surrounds. The rest of the country got involved too: by one estimate, 3.5 million of Turkey’s 80 million-strong population participated in 5,000 separate protests in late May and early June.

Of course, it was never just about the park. The mass demonstrations were a reaction by a large slice of Turkey to a Prime Minister who is taking the country in a new and untested direction. Under Recep Tayyip Erdogan, who has been in power since 2002, Turkey has become more conservative; more religious, in public at least; and has embarked on a dramatic shift in foreign policy, reviving the memory of the Ottoman Empire in its successful push for more influence in the Middle East and Africa.

For most Turks, these are welcome developments. The ballot box proves this: Erdogan’s Justice and Development Party (AKP) has won every election since 2002, by increasing margins every time. Much of Turkey, especially the rural areas, is fundamentally conservative. It is fundamentally religious. And it is in love with Erdogan, giving his party an unprecedented 45% of the vote in last month’s municipal elections. No other party managed more than 28%. “I would be the hair on his bum,” declared one supporter at an AKP rally (no really, we promise we’re not making this up).

It helps that under Erdogan, Turkey is booming. The economy has grown by around 5% per year, even while the rest of the world was going through its worst financial crisis in decades. Standards of living have improved across the board, and there are a lot more jobs than there used to be. Erdogan inherited an economic basket case, and has turned it into one of the world’s more attractive investments. This is a remarkable achievement.

These are uncomfortable truths for Turkey’s liberal elites, who were instrumental in organising and sustaining the anti-government protests. Their concern, however, is that Erdogan is not content to stop here; that he plans to tear up modern Turkey’s history in favour of a neo-Islamist state, one where civil rights come below Sharia law, and where non-Muslims and non-practising Muslims are marginalised and even persecuted.

Their fears, although exaggerated, are not entirely without foundation. Erdogan has pushed through several controversial reforms which indicate that the division between mosque and state is not as strictly enforced as it used to be, most notably the law which allows women to wear Islamic headscarves at public institutions and events (this had previously been banned). In all branches of government, overt displays of piety are now encouraged, and considered essential for any officials hoping to advance their careers.

Most tellingly, Erdogan has effectively undermined the independence of the armed forces. Mustafa Kemal Ataturk, the founder of modern Turkey, told his generals before he died that they were the guarantors of Turkey’s secular future. It is a role they took seriously, perhaps too seriously, instigating four military coups between 1960 and 1993. It is no longer a role they are able to perform. In a series of judicial operations, over 300 military top brass were detained over the past few years on dubious charges of treason and plotting. Most are still locked up in a specially-constructed prison on the outskirts of Istanbul, and have been replaced by officers sympathetic to Erdogan. The military, for so long the guardians of Ataturk’s vision, have been neutered.

It was all these frustrations that underpinned the Gezi Park protests. For the millions that are wedded to the idea of a secular, western-oriented, European Union-joining Turkey – a large minority – Erdogan’s path is an existential threat to their way of life.

Erdogan’s response to the protests did little to alleviate these concerns. Branding the protestors as spies and traitors, his police launched a brutal crackdown. At least 11 people died, and scores more were injured. Although in private he must have been worried, in public Erdogan was stubborn and defiant.

Since then, he has tightened his grip on the media – engineering the purchase by allies of two popular newspapers – and cracked down on political gatherings. Nowhere is this more evident than in Gezi Park and its surrounds. Undercover cops, looking just a little too normal, patrol the area, the occasional bursts of walkie-talkie chatter giving them away. Other police units wait in side streets, helmets on and weapons drawn. Several activists told the Daily Maverick that they now feel like they live in a police state.

Erdogan, however, is not having it all his own way. In fact, the protests and their aftermath is just one of several major crises that are threatening his grip on power.

Perhaps the most significant is the new rivalry with the Fethullah Gulen movement, a shadowy religious sect that was once Erdogan’s most important ally. Named after the former imam who heads it, the movement is popular and extraordinarily influential, with members occupying all kinds of high-profile positions in the government, civil service, and private sector – and, increasingly, in the police, judiciary and armed forces. Most analysts believe that Erdogan could not have accomplished all that he has without the support of the movement.

It’s still not exactly clear why Erdogan and Gulen have gone from allies to enemies over the course of the last year. Informed speculation suggests that Erdogan was no longer willing to allow the movement to dictate his policies. Whatever the reason, it has already had serious political consequences, and could well hurt the prime minister even further in elections to come.

Those consequences came in the form of several leaked audio tapes, allegedly featuring the voices of Erdogan and several close aides, including Erdogan’s son, which appear to prove the prime minister’s direct involvement in a multi-million dollar corruption scandal. He denies any involvement, and says the tapes were forged.

Another serious challenge to Erdogan’s authority was the mining disaster in May in the city of Soma. A total of 301 miners were killed when a fire broke out underground. Erdogan’s response was uncharacteristically tone deaf: he told the dead miner’s families to stop complaining because mine disasters happen everywhere. On a visit to Soma, he was booed by crowds who had come out to express their unhappiness with the government’ lax safety regulations. This didn’t go down well with the Prime Minister: he threatened to slap one protestor, while an aide was filmed kicking another.

Although concerning for Erdogan, he knows he can afford the odd misstep, as those strong municipal election results show. But the real test will be in August this year, when Turkey holds its first-ever direct presidential election. Erdogan, who has already served three terms as prime minister, is almost certain to run – and almost certain to win handsomely.

This should not discourage Erdogan’s growing number of opponents. Yes, they are stuck with Erdogan for at least another five years, and probably another five after that, but this is the price of living in a democracy. The majority gets what it wants. Instead, Erdogan’s detractors should be encouraged by the signs that Erdogan’s will is not absolute, or anything near it; he must still deal with powerful enemies, like the Fathullah Gulen movement, and he has shown that he is not immune to the power of mass action.

Gezi Park still stands, remember. Maybe it’s not so uninspiring after all. DM

Photo: Fireworks thrown by protesters against Turkish riot police explodes and illuminates the scene during a demonstration in Istanbul, Turkey, 11 March 2014. The death of Berkin Elvan, a 15-year-old boy who was severely injured after he was struck on the head by a police tear gas canister during mass anti-government protests in Turkey nine months ago, triggering renewed clashes between activists and police. The Elvan family has blamed the conservative government of Prime Minister Recep Tayyip Erdogan for their son’s death. EPA/ERDEM SAHIN