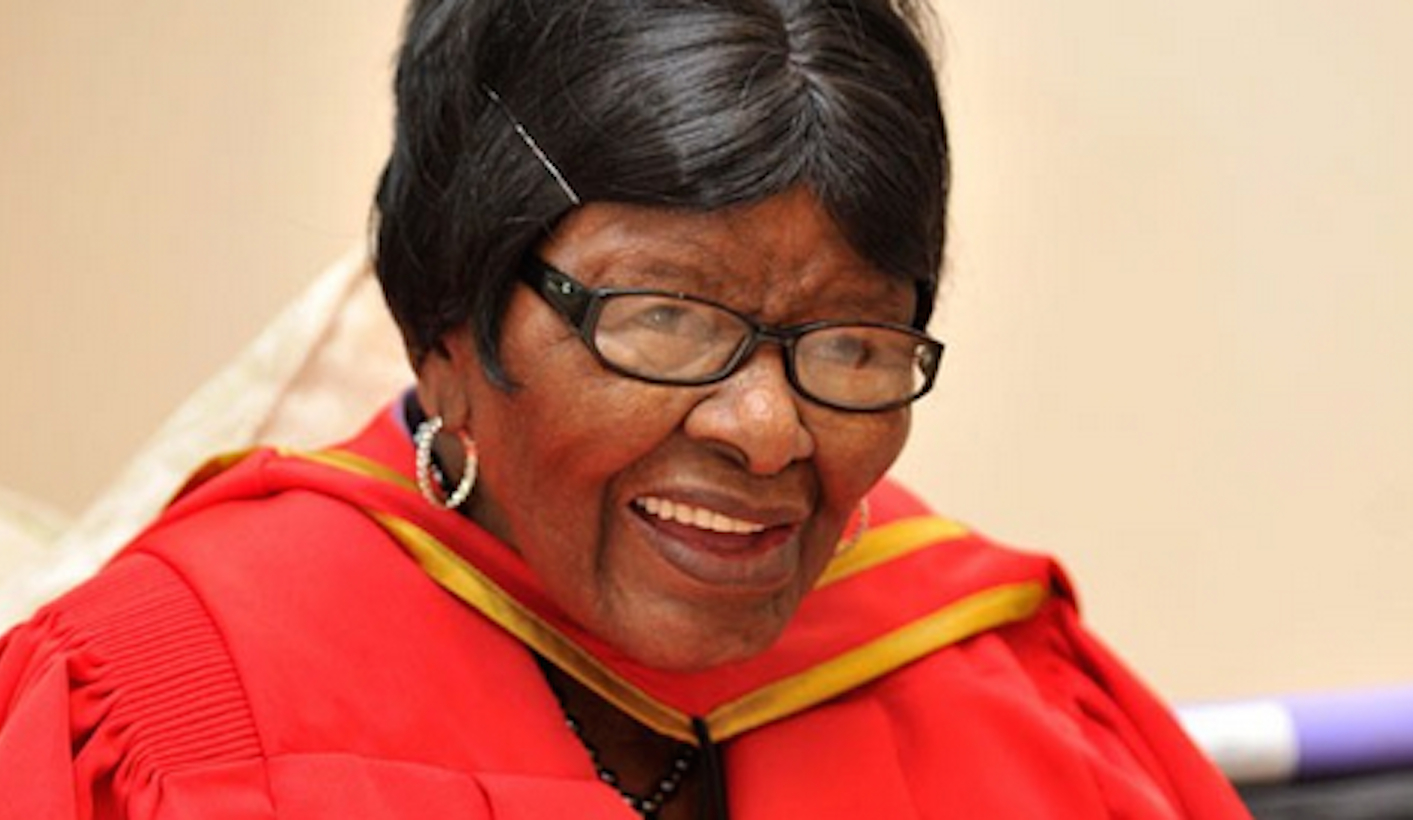 Being an independent woman and thinker in a patriarchal society often meant that MamoTseki, Nomaka Epainette Mbeki (nee Moerane), MaMbeki was read through the lens of her husband, Govan and her son, Thabo. In many ways, this “invisibility” suited MaMbeki’s temperament. She did not care about newspaper headlines. It was also not rubbing shoulders with the kings and wealthy of the world that defined her. It was with her neighbours in the village of Mbewuleni, and from 1974 in Ngcingwane, that she fulfilled herself. NOMBONISO GASA pays tribute to a true South African pioneer who died on 7 June at the age of 98.

The harsh landscape of Mbewuleni carries in its crevices the secrets, hopes, tears and idealism of a young couple who moved there to make an independent existence in the 1940s. Like so many other activists of their time, MamoTseki, Nomaka Epainette Mbeki (nee Moerane) and her husband, Govan Mbeki, knew that dependence on government salaries would render them vulnerable.

The couple could easily lose their positions and salaries. Their move to Mbewuleni was also inspired by their commitment to working with and understanding the “peasants’ existence”, a subject close to both their hearts and captured in Govan Mbeki’s book, The Peasant Revolt, a history of the Mpondoland resistance.

MaMbeki, as she was fondly known, was born in Mount Fletcher in Transkei or South Eastern Cape. She went to Lovedale where she studied to be a teacher. Lovedale and Fort Hare were premier institutions where Africa’s black leaders and intellectuals studied and developed their political ideologies and passions.

Like Albert Luthuli, another leader of the African National Congress, MaMbeki worked at Adams College, among other places.

She carved her path and at times their paths complemented each other, and at other times they took different routes. Being an independent woman and thinker in a patriarchal society often meant that MaMbeki was read through the lens of her husband, Govan, and her son, Thabo Mbeki.

Hers is a story that is all too familiar to African women in South Africa. To this day, her peer, Josie Mpama, is less known for her own work than being the partner of Edward Mofutsanyana.

In many ways, this “invisibility” suited MaMbeki’s temperament. She did not care about newspaper headlines. It was also not rubbing shoulders with the kings and wealthy of the world that defined her. It was with her neighbours in the village of Mbewuleni, and from 1974 in Ngcingwane, that she fulfilled herself.

Long before women’s craft and income-generating projects became “the thing to do”, MaMbeki, together with a small group of women, ran beading and sewing projects. To speak of her humility is to attach a quality to a life lived naturally. She mingled with her neighbours as they did with her.

The village people knew her as she knew them, especially the women. Together they struggled, raised their children while their husbands were away. Hers was on Robben Island. Her children were in exile.  There were times when it must have been a hard and very lonely existence.

While others expected their spouses at the end of the year, even if briefly, she knew that she could not have such expectations.

Many stories have been written about the humiliations that the families of the men on the Island experienced at the hands of the authorities.

For example, one did not know whether or not the visit would be allowed. They did not know when regulations and requirements would change. But they kept on going and using that time to catch up, if that were possible.

The strength required to endure such experiences may be partly driven by the attachment to one who is imprisoned. But we know that it is also driven by something larger than that.

In the case of MaMbeki, like many of her sisters who crossed those cold waters of the Atlantic Ocean, it was also an act of defiance. “We are here. You cannot erase us.”

Her quest for a just society continued until the last days of her life. She spared no one. Not even her son, former president Thabo Mbeki. The clarity of her voice and her razor-sharp mind defied her age. She drew deeply from the long hard years of her life and that of the people amongst whom she lived.

At times, she was their counsel, when they needed her advice. Most of the time, she was their equal, a fellow traveller in the journey towards full liberation and justice. Many found her independent mind and spirit unusual and disturbing. Ours is a society that applauds conformism, after all. This did not discourage her.

She spoke her mind with grace, dignity and authority. Her humanity shone in those statements. While she did not hesitate to speak her mind when Mbeki was recalled, she was clear that she harboured no ill will and she had a wicked sense of humour.

When then Eastern Cape premier Arnold Stofile asked her to go to Parliament, she replied: “That is not for me. I want to live amongst people. I can’t go to Parliament. I will be as dull as you people there.”

It was this constant balance between banter and serious personality that humanised her. She spoke openly about her years of hardship. “You want me to live another 100 years. What for? I have had a long and hard life. You have not consulted me about this wish of yours,” she said at her 96th birthday.

And then she laughed, a deep belly laugh that had a hauntingly sad edge to it. She was a pioneer who cut through unknown lands and explored new theories and ways of life. Yet she remained deeply rooted in the land that holds the umbilical cords of her children, her tears and triumphs.

It echoes across the land, in this time when we say Hamba Kahle, MaMofokeng. DM

Nomboniso Gasa is a researcher, writer and analyst on gender, politics and cultural issues. She is senior research associate at the Centre for Law and Society, Faculty of Law, University of Cape Town.