HANNIBAL ELECTOR: This is the end 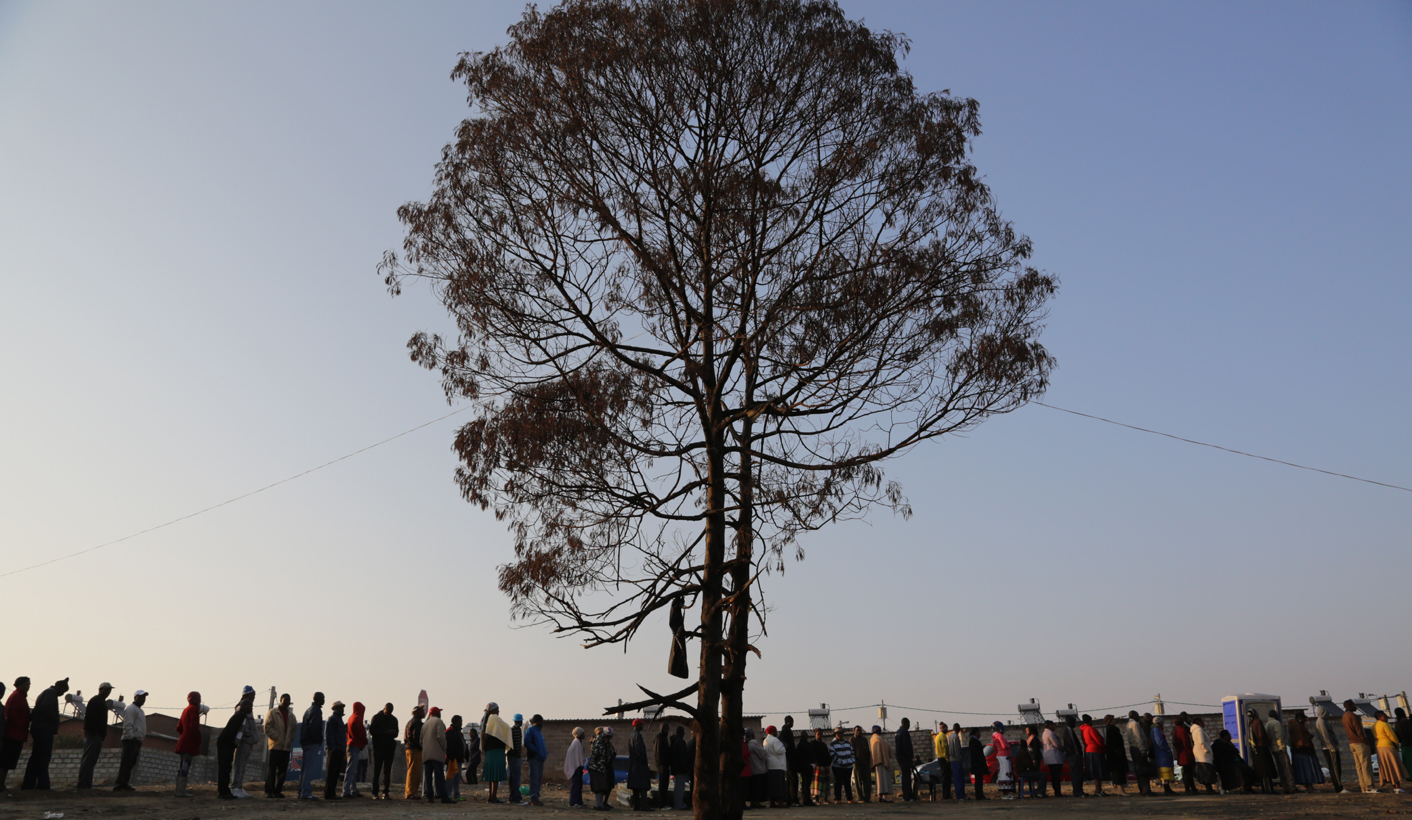 This is the concluding Hannibal Elector essay for the 2014 General Elections. By RICHARD POPLAK.

According to a very popular [Akan] proverb, it is because God dislikes injustice that he gave everyone their own name (thereby forestalling the misattribution of responsibility). Along with this clear sense of individual responsibility goes an equally strong sense of the social reverberations of an individual’s conduct. The primary responsibility for an action, positive or negative, rests with the doer, but a non-trivial, secondary responsibility extends to the individual’s family and, in some cases, to the surrounding community.

—Kwasi Wiredu, The Moral Foundations of an African Culture

Let’s wrap these elections up. And let’s do so by considering an ethical conundrum.

In the midst of this election business, during an otherwise pleasant dinner, a smart, sensitive man asked me which political party I planned on endorsing. He felt that I had a moral imperative to stand behind, not just against, a party or a politician or a policy position. It is one thing, he said, to constantly criticise, to play the cynic and get paid for the pleasure. But democracy is about choices. Difficult, uncomfortable choices. I had a responsibility, my dinner companion insisted, to shit or get off the pot.

The conversation occurred two months into the campaign, and no one had yet lobbed that particular grenade at me—and by ‘no one’ I included myself. Unlike at an American or British publication, there has never existed an unwritten but inflexible demand for the Daily Maverick to endorse a party provincially or nationally, and therefore no pressure on us as staff writers to consider whom we would back in a public forum.

The problem: To endorse would be to buy into one of a number of manufactured fantasies created by successive South African regimes over the course of the past four centuries. It would be an act of authenticating the unreal.

An endorsement is, of course, very different from a vote. The former is a public merging of a personal brand with a political brand; it is an act of politics. The latter is a private communion with the democratic process; it is an act of citizenship. In the scheme of things, wiping one’s ass with a ballot and stuffing it in the box is still engaging as a citizen, perhaps more so than a meekly acceded tick alongside the likeness of a preferred candidate. Voting—even if it has become a private hell that more resembles the Catholic relationship with guilt than it does Jeffersonian democracy—is an act South Africans fought and died for. Endorsing is something we fought and died against.

Nevertheless, it is deeply troubling to live in a milieu without heroes. The two books that launched the non-fiction literary tradition in which Hannibal Elector harbours pretensions—Joe McGinnis’s The Selling of the President and Hunter S. Thompson’s Fear and Loathing on the Campaign Trail—mapped a new mythology. Because the writers were Democrats, and because the demonstrably reprehensible Richard M. Nixon was the Republican candidate during their respective undertakings, those books told a tale of Good vs. Evil. In America’s narrowly tribal political system, you’re either Red or Blue, Dinka or Nuer, and political writing is by its very nature Hollywood-action-movie archetypal.

Here in South Africa, no such luck. That’s not to say that there aren’t any fabulously committed politicians, political organisers and activists in this country—men and women who back the likes of Mamphela Ramphele with hours of their time and oodles of their money. These people genuinely want to contribute. Good things have happened, they argue. Political transition, they insist, successfully afforded tens of millions of formerly oppressed South Africans the basic right of franchise. Some people got electricity, others got water, still others scored Bentleys. But let’s not fool ourselves into thinking that this amounts to anything more than gilding the turd. Democracy is not an act that ends with voting—it’s only democracy if it empowers representatives to represent, not thieves to thieve. This country is and always has been a country full of poor black people, and that’s because it was designed to be.

South Africa as a concept is pure evil. If you think that’s just hipster posturing, it’s because you haven’t properly registered the 400 unbroken years of human degradation and indignity that forms the bedrock of this place. I’d insist that you’re living Power’s dream—worse, you’re a figment dreamed by Power. And to buy into any element of A Good Story to Tell—to inhale even a molecule of the Goldman Sachs-ification of the past 20 years as a “success story”—is an act of endorsement.

And you might as well say adios to your soul.

Fine. But what is to be done about all of this?

First of all, I’d like to consider the quote perched atop this essay, specifically the line, Along with [a] clear sense of individual responsibility goes an equally strong sense of the social reverberations of an individual’s conduct. This doesn’t just mean that when we do bad things, bad things happen. It also means that when we do nothing, bad things happen. There is, embedded in the quote, a reminder that an active and engaged citizenry is an essential element of any society.

I believe that the only things worthy of endorsement are the needs of our souls. And how do I presume to know what “our” souls need? I don’t think there’s much mystery to it. In a political context, we’re only fully realised when we plug ourselves into the flow of national life, when see the tremors of our souls reflected in the values of the country. We need to contribute, and we need to see those contributions resonate. We need to feel protected by justice, righteousness, fairness. And we require the mechanisms to protect justice, righteousness, fairness.

At the dawn of democracy, South Africans outsourced their morality to a Messiah, whose task it was to do the heavy lifting. Almost every element of personal agency, to say nothing of the agency of unions and fringe groups and civil society organisations that had for years pushed back against Power, threw their lot in with government. The moment that South Africans exhaled and waited for the reconciliating and social granting and general nappy-wearing to begin, the conditions that had prevailed during Apartheid—that is, governance by decree, without input, as if we were the drooling inmates at a remedial nursery school—were reconstituted and renamed, but remained effectively in place.

Nothing changed. And in order for that ungodly African koan to unravel, we need to find a way back to ourselves. We need to reconsider the role of government, and recall the best of the fight against oppression—the dozens of meticulously negotiated alliances that shifted and roiled and danced toward the version of freedom that was later squandered. We need to simultaneously find the ego (I am a person) while shedding the ego (I am the only person). We need to empower our communities (our voice counts) while disempowering the worst communal instincts (ours is the only voice that counts). This is not easy work. But the greatest trick the devil ever played on South Africans was getting us to sign off on our individuality for the good of the utopian whole.

The destruction of the South African phantasmagoria cannot be outsourced to bullshit artists or poets or Brand South Africa shills. We have to organise around a fight, and that fight is undoing the unfairness and inequality that has defined this country ever since the first boats landed at the Cape of No Hope.

How should we do this? How the hell would I know? I know it isn’t by getting nine-year-olds to lob Molotov cocktails at Nyalas in Bekkersdal. I know it isn’t by delivering a petition for “six million REAL jobs’ to Luthuli House while wearing a blue hard hat and yelling “Viva! Zille! Viva!” I know it isn’t by lauding the Public Protector as a National Heroine Messiah Person for doing her fucking job.

We do this, I think, by becoming a people. By understanding that every lie, every act of corruption, every step along the road to completing Fantasia’s fortress is one that requires our collective attention. We must take to the streets, and stay there. We must reach a point where we become ungovernable.

Like you, I harbour the vague hope that all of this can be achieved through politics. I wouldn’t have followed this election process if I didn’t believe that remained a possibility. But it’s a politics that South Africans must dictate to their politicians, not the other way round. The 62.15 percent of voters who voted for the ANC aren’t idiots—they did so for any number of reasons, most of all because the ruling party represents the best worst option, if not the spiritual home many claim it to be. But what if that 62.15 percent began imposing? What if that cohort began asking for the best possible future, not for a barely acceptable present?

Then, I think, we would have the makings of a country.

Who wants to be the ragged prophet, offering mantic visions of the hell to come? Personally, I’d rather be the guy with the hug and a smile, hanging flowery garlands on visitors exiting customs at O.R. Tambo International. I’d rather say, “Welcome to South Africa, have a nice day” and not, “Welcome to a front for the mass extraction of capital, I hope you get rich real quick.”

If I had that dinner conversation over again, I would answer like this: I endorse the South African soul, a soul that is preternaturally aware of the evils of oppression, a soul that has absorbed indescribable amounts of pain. I would remind my interlocutor that we were each given names—not numbers, not dompasses—in order to forestall injustice. I’d remind him that freedom demands unwavering vigilance, and vigilance is less lonely when 50 million individuals, each with their own name and their own signal tremor, are watching along with you. DM

Hannibal Elector will next appear in Until Julius Comes: Adventures in the Political Jungle (Tafelberg), which will be in bookstores everywhere August 1. Watch this space for further details.

Photo: South Africans stand in line to cast their vote at a polling station in Alexandra township, Johannesburg, South Africa, 07 May 2014. EPA/CORNELL TUKIRI