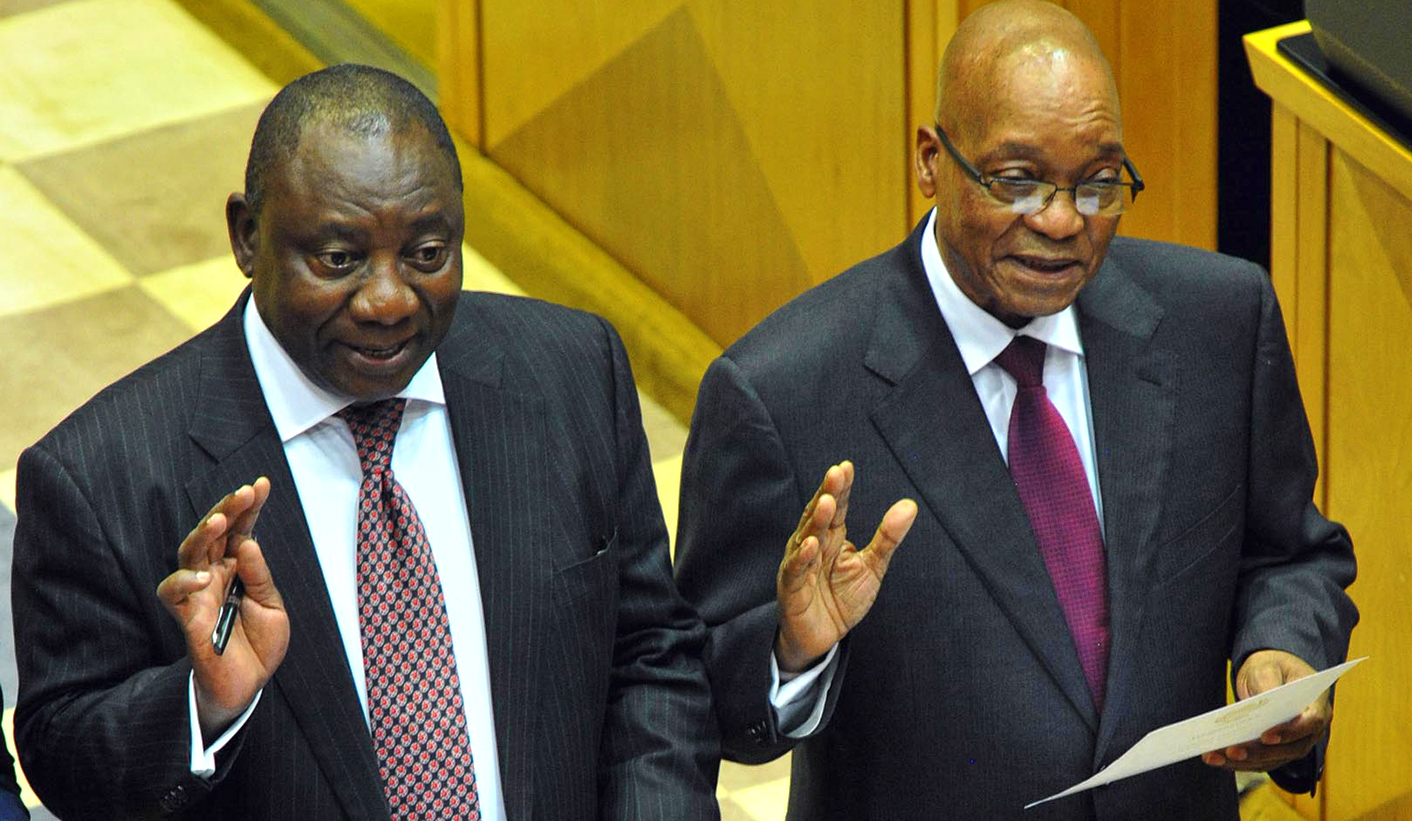 “Habemus Papam!” is the Latin announcement made by the Vatican when they present the new Pope to the world: We have a Pope! Habemus President was the ANC’s order of the day at the first sitting of the new Parliament on Tuesday, minus the white smoke. We have a president – the same old one, with the same old scandals hanging over his head. But the presence of the EFF’s 25 overall-clad MPs seemed to portend a changed spirit to this fifth Parliament nonetheless. There is a fresh (red) energy in the National Assembly. By REBECCA DAVIS.

It’s official: Jacob Gedleyihlekisa Zuma will be president of South Africa for a second term. Nominating Zuma as president of the country, ANC MP Rosalia Morutoa declared it the will of “the African National Congress and millions of South Africans”. Of course, technically we have no way of knowing if the latter claim is true, since South Africans vote for a party rather than a president. But the mood among ANC MPs was, on the surface at least, celebratory; a jubilant chorus of “My President” accompanied Parliament’s dismissal.

Zuma himself was the picture of humility, humbly pressing his hands together as he confirmed to Chief Justice Mogoeng Mogoeng that he accepted the nomination. The DA wasn’t about to let it slide without some gesture. Federal chairperson James Selfe rose to deliver the opposition party’s objection, calling the nomination “irrational” given the spectre of Nkandla hanging over Zuma’s head and his failure to adequately respond to two Public Protector reports on the matter. Zuma, the DA contended, was not a “fit and proper” candidate for the role.

Home Affairs Minister Naledi Pandor was playing defence for the ANC, icily countering that Selfe had failed to study the provisions of the Constitution in this regard. Mogoeng read briefly from the holy document to prove the validity of Pandor’s statement: having been sworn in as a member of the National Assembly without problems, Zuma was indeed fully eligible to stand as president, as was any other member.

There were no other nominations. “It looks like Honourable Malema is signalling his availability,” quipped Mogoeng, earning raucous laughter from the newly honourable member in question. But for this Parliament at least, it was not to be. With Zuma’s nomination seconded, all that remained was for Mogoeng to congratulate Number One on his election once more.

Photo: New EFF MPs pose for a photo during a voting break at Tuesday’s first sitting of the fifth parliament (Rebecca Davis)

The election for the highest office in the land, in other words, proceeded far quicker than that for Parliamentary Speaker. Against the ANC’s pick of Baleka Mbete, the DA had resolved to put up their own candidate, former Eastern Cape premier Nosimo Balindlela, necessitating a vote. Malema and the 24 other EFF MPs did not participate, earning a protest from the FF+’s Pieter Groenewald. Mogoeng slapped him down, confirming that MPs present in the National Assembly did not have to vote for a Speaker if there was no candidate they wanted. Malema nodded meaningfully.

So much for solidarity in opposition, though the 25 EFF votes would have made no difference. It was a landslide victory for Mbete, with 260 votes to Balindlela’s 88. (The DA has 89 seats in this Parliament; the ANC, 249. Mbete clearly has some supporters in the smaller parties.)

Minutes after the close of Parliament, the DA had already put out a statement objecting to the election of Mbete, who the party fears will act as a “gatekeeper for Luthuli House”. Former Speaker Max Sisulu, who is reportedly very conscious of the need to uphold the respected legacy of his surname, had a reasonably even-handed approach, most notably manifested in his establishment of the ad-hoc committee to consider President Zuma’s response to the Public Protector’s report on Nkandla. The decision of whether to re-constitute the committee is now in Mbete’s hands – and the opposition, at least, is clearly unconvinced that she’ll do it.

These two elections made up the only real business of the fifth Parliament’s first sitting, after its 400 MPs were sworn in by Justice Mogoeng in a process that took up much of the morning. In other respects, the first day of the new Parliament is a bit like the beginning of a new school year. There are fresh faces and veterans, reunions and new encounters. Bells ring to call you in from break, and you get told off for talking too much.

And there are uniforms – at least for the EFF, who won the lion’s share of media attention by holding true to their promise to turn up in red workers’ overalls and hard hats, with some female MPs wearing domestic worker uniforms. Rival politicians may dismiss it as a gimmicky piece of political theatre. Some social media commentators saw it as disrespectful to the Parliamentary process. The EFF says it’s a way of signalling their commitment both to Parliamentary work, and to the workers they represent. However you choose to interpret it, it’s an undeniably effective way of making a statement, and ensuring that the party’s representatives are instantly identifiable in a sea of National Assembly faces.

The newcomers were in high spirits, dancing and singing before their swearing-in ceremony. During the voting break EFF members congregated in a smoking courtyard, posing for photographs between cigarettes. “Floyd [Shivambu] must stand at the back,” Malema said, marshalling his troops for the perfect snap, while Shivambu entreated photographers to email them the picture.

New MPs have every reason to be cheerful. For one thing, they’ll be earning a cool R933,852 per year, in addition to 42 free return domestic flights, free phonecalls and subsidised housing in the Parliamentary villages for MPs from out of town. They’ll also benefit from Parliament’s lavish food budget – up to R18 million per year, according to reports. The DA’s Ian Ollis complained last year that Parliamentary committees were being served seafood platters and lamb chops at 10.30 am.

Nice work if you can get it, indeed. But Mbete, settling into her Speaker role, reminded the assembled Parliamentarians of the gravity of their role: to “represent our people with dignity, purpose and honour”. Among new MPs, there was a sense of nerves as well as excitement.

“It’s a little bit surreal,” said Zak Mbhele, 29, a newly-minted DA MP who previously served as spokesperson in the Western Cape Premier’s office. “I think I only remember about five seconds of taking the oath.” Mbhele said that over the next few months he would be aiming to “hopefully make a mark”, and perform as well as possible in Parliamentary committees.

Did the thought of the combative Parliamentary exchanges make him secretly quake?

“I expect it, but I’m not scared of it,” Mbhele replied. “I’m quite capable of giving my own back.”

Many of these new young DA MPs had a close relationship with the party’s former Parliamentary leader Lindiwe Mazibuko. Mazibuko was in attendance for the first Parliamentary sitting – but in the gallery, as a spectator, a role she described as “bittersweet” to journalists afterwards. Speculation that Mmusi Maimane will replace her as head of the DA Parliamentary caucus remains just that, with a vote taking place only next Thursday.

“I was looking forward to serving with her,” concedes Mbhele. “Definitely her absence will still linger.”

“We always knew this was our destiny,” he said. But he admitted that he felt a grave sense of responsibility in taking up the MP mantle on behalf of EFF’s constituents. “I am worried about the problems afflicting our nation,” he said. “There’s an expectation from our people that for the first time their voice will be heard in Parliament.”

What about the overalls and hard hats? An opening day flourish, or standard EFF Parliamentary wear from now on? Twala was adamant they wouldn’t be coming off.

“The objective is to change the dress code of Parliament to what South Africa is: the poor,” he said.

There was a photo doing the rounds on Tuesday showing Zuma seeming to look on grimly as the EFF MPs were sworn in. Then again, he might just have been bored: the swearing-in process is long and tedious. But the EFF’s take-no-prisoners arrival in Parliament certainly seemed to charge the air with a new dynamic. Boys and girls, let the games begin. DM

Photo: President Jacob Zuma and ANC deputy president Cyril Ramaphosa take the Oath of Office during the swearing in of MPs as South Africa’s fifth Parliament convenes for the first time in Cape Town on Wednesday, 21 May 2014.Picture: GCIS/SAPA