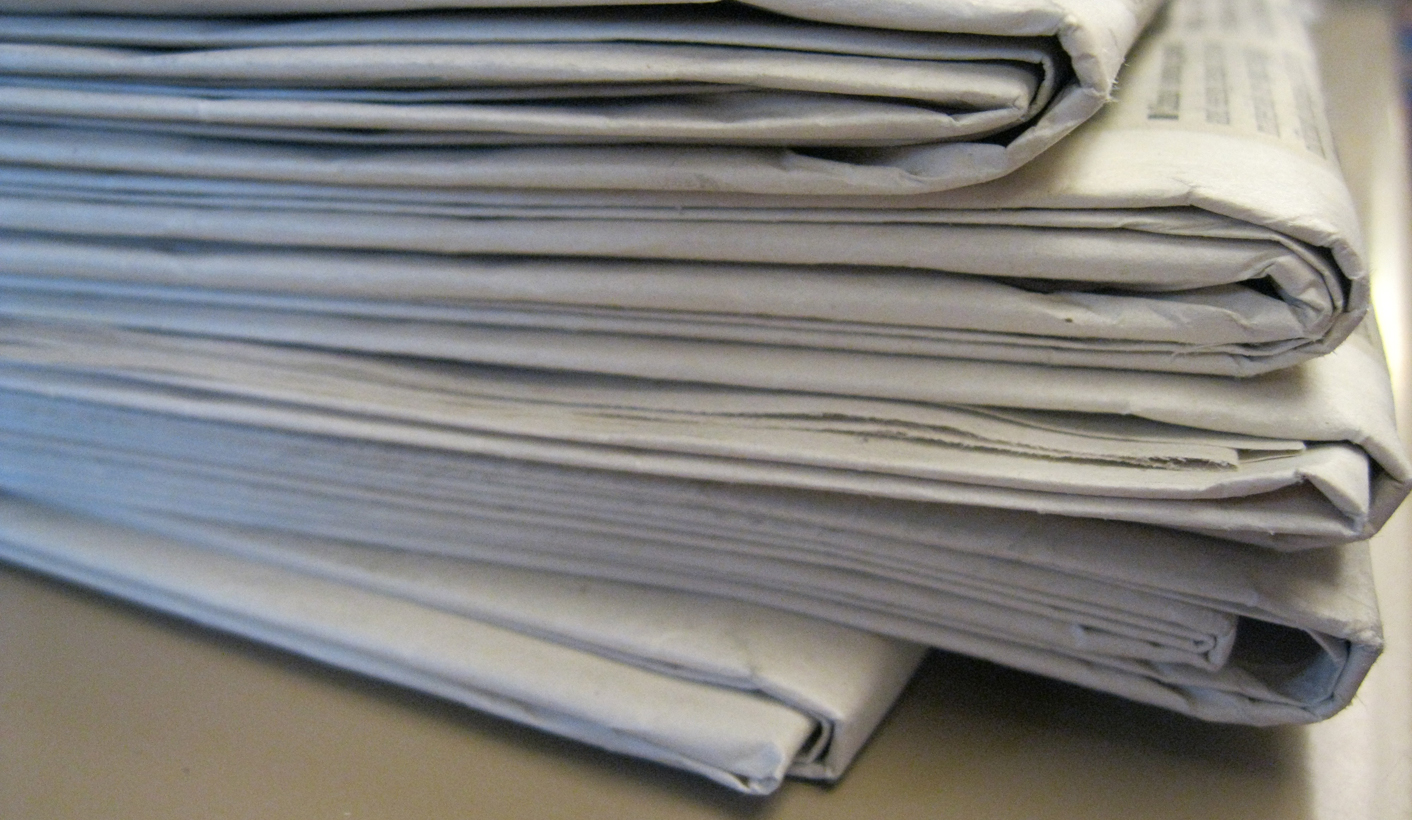 As a South African media practitioner, or as my wife would put it, someone who gets paid to talk for a living, I read a lot of newspapers. All the time. Often very quickly, in my eternal quest for new ideas to understand just what on earth is happening at any one time. But apart from a brief stint working for Business Day, I’ve never really spent much time in them. However, I am what you could call an interested observer of our newspaper industry, from the point of view of a consumer. And quite frankly, some of it really deserves the bad press it’s getting. It could make much better use of the content it produces than it does at the moment. By STEPHEN GROOTES.

As someone who works for a radio station and a website, I should know better than to criticise my friends in newspapers. Allow me to be clear. It is the practices, and the way they are run as businesses that worries me. Not the journalism, and certainly not the journalists. And the criticism I want to suggest cannot apply to Business Day or The Times. They are, I think, quality newspapers. Having worked for that group, it would also be wrong to try to critique it now, so it’s safer to just exclude them unless specified directly. The Mail & Guardian is a weekly of a different type, and therefore doesn’t really fall into this particular critique either. It’s about daily newspapers, that, I think, could be so much better without spending massive amounts of money.

Newspaper people, and particularly their owners, like to claim that the world is against them at the moment. People are moving away from print to tablets and phones, radio and TV are bigger than they’ve ever been. And then there is the internet as a whole, and with it, Twitter. News is a commodity, people believe information should be free, and – catastrophe of catastrophes – sites like this one actually are free.

This does make it very difficult for the good old-fashioned broadsheet or tabloid to survive. But the fact is, many newspapers aren’t even putting up a fight.

This fight is really about information. Who has it, how valuable is it, and why is it different to what everyone else has? Then there is distribution. Is it delivered to you over your radio while you’re driving, do you read it and get ink on your hands while doing so, do you surf while at work, or browse tweets while standing in a queue? Or give it your whole attention for half an hour at a time on TV?

All of these methods have different advantages and disadvantages. Radio is quick, and brings you the actual voice of the newsmaker. It allows you to hear the live interrogation, so you can make up your own mind. The internet is quick too, but often shallow [of course, this site being a massive exception! – Ed]. TV is often slower, but has pictures, and everyone likes those. And Twitter is Twitter.

Newspapers have an advantage they can use, in that they have time to reflect before writing. They also have some space, certainly more than TV or radio. This allows them surely to add value to the news they carry in their news sections.

Sports writing, as it is currently in our newspapers, is already like this. In the authoritative history of the Springboks, Chris Greyvenstein’s Springbok Saga, there is a picture of the front page of a newspaper. It’s a report of the first Springbok Test match against New Zealand on home soil in 1928. There is a picture of that great flyhalf Bennie Oslar over the page. The text of the story describes the rugby match, chronologically, from the start to the end. This is because the people reading it hadn’t seen it. Radio commentary hadn’t started either. They knew the score, but they didn’t know about the game. Now, any newspaper will have textured, analytical, often funny and emotional news stories in the sports section.

The same technological changes that now mean those stories are aimed at people who watched the game mean that same audience already knows the facts of the news when they buy, or don’t buy, their paper. So why has news reporting in newspapers not changed in the same way? Why is the story you read in the paper often so similar to the facts contained in the TV news bulletin the night before? Where is the added value to the newspaper’s reader?

But deeper in these papers are opinion and analysis pieces, which do add value. On the day before the elections, Business Day moved Professor Steven Friedman’s regular column to page three. Considering he is perhaps our leading public intellectual, it was a clever move. But why not take it further; why not put it on the bottom of page one? That would add value to your front page, and make people who value Friedman more likely to buy that copy of the paper.

The Oscar Pistorius trial is the one of the best examples of this. It is really impossible to get a big scoop out of that story now. But several newspapers lead with it anyway. The Star and the other Independent titles have a regular column called “Courtside”, which provides a more tailored, textured round-up of what it was like to be in court. That is unique added-value content. It’s a little bit like some of Rebecca Davis’s reporting on this site, but not quite as acerbic. And yet it’s hidden away, while a news story, containing no new facts about Oscar, is placed on the front page.

The same goes for several of the paper’s regular columns. People like Eusebius McKaiser and Peter Fabricius have the potential to add unique content to papers that otherwise contain old news. But to find their stuff requires much thumbing and searching.

Then there is the actual nuts-and-bolts business side of things.

Two years ago, I decided to subscribe to a certain Sunday newspaper. I bought a copy of the paper, and scoured it looking for the number to call to make this happen. It did not exist anywhere in the paper. I went online, and googled the paper’s name and the word “subscriptions”. Didn’t exist. I then went to the site of the paper’s owner. Nada. Eventually, I had to actually perform some good old-fashioned journalism of my own, track down the deputy editor (he happened to be sitting next to me at our next dinner party), who then got someone to call me.

If I weren’t someone who had to read Sunday papers, I wouldn’t have bothered.

And it seems all the Sunday papers that have subscription lines keep them closed on a Sunday. The very day you would think to yourself that you want to subscribe to one. The one paper that is very good at this sort of thing, the Sunday Times, is better, but not perfect. Once you’ve sorted out your subscription over the phone, you still have to wait a couple of weeks for your paper to start arriving. In the 21st century, does it really take that long to update a computer system? What are they using? Papyrus?

Compare that to a certain radio station I happen to know rather well. Its website has a “tune in” section that explains how to tune in, where you can find it if you’re not in its FM broadcasting area, and detailed instructions on how to listen over the internet.

There are other ways newspapers appear to not have kept up with the times.

Driving in Joburg at the moment means you have more than ample time to study newspaper billboards. Many of them, again not for Business Day, refer to black people by their first names. It’s common to see “Thuli takes on Zuma” in a headline. Or “Tito for Finance Minister”, or “Nomvula to stay on”. Zuma is the exception. But you never ever see white people referred to by their first names, unless they’re sportspeople. Why?

No doubt some old sub will claim that it’s about space and that some names are longer than others. That’s simply not good enough. It looks patronising and racist, quite frankly. Even if, and this is hard to assume, but even if it’s not racist, it would certainly look it to the majority of a potential market for your newspaper. So just don’t do it.

As someone who works in our media, I need a proper media environment. And it’s not just need; I want, crave, as many different media outlets as possible. It’s for this reason I really, really want every newspaper that is out there at the moment to continue operating. And more to open. Which is why I think it’s necessary to say what I’ve said.

I love newspapers. That’s why I think a critique is necessary. And why I think they could be so much better with just a little effort. DM