Of punditry, polling and psychics: The madness of election predictions 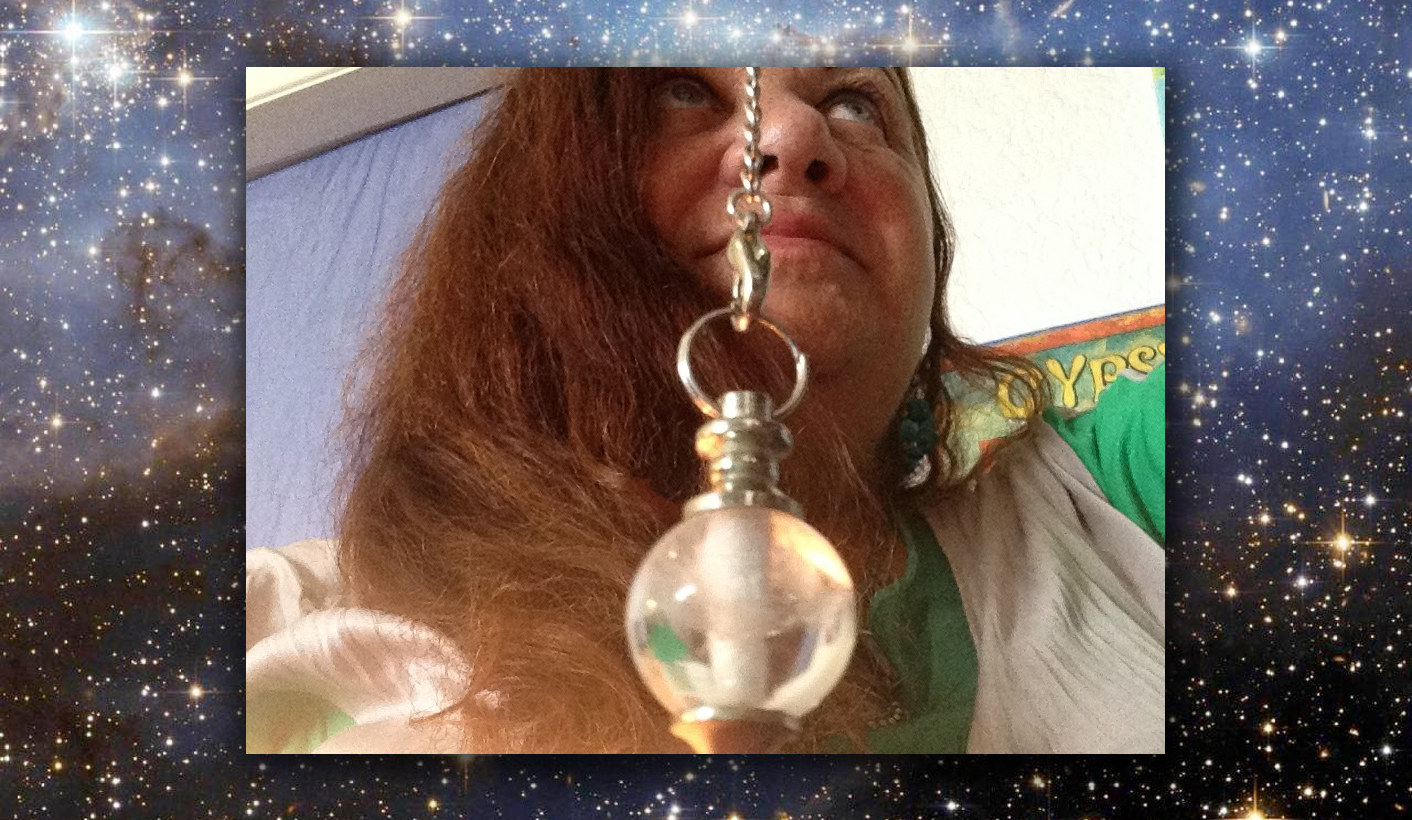 With mere days to go before South Africa goes to the booths, anybody claiming to be able to predict with certainty how the country’s citizens are going to vote should be treated with more than a little skepticism. There is reasonable consensus about the election’s likely outcome – that the ANC will win a majority, for instance – but estimates as to smaller parties’ performance in particular vary considerably. We’ve heard from pundits and we’ve heard from pollsters: we decided we might as well give self-proclaimed psychics a go at the predictions game. By REBECCA DAVIS.

It doesn’t seem particularly common for South Africans to place bets at bookmakers on election results, but if it were, you’d have to be feeling pretty flush to take a punt on any precise figures. (Then again, perhaps you’d just take your lead from the bookies’ odds. Before India’s currently-running elections, it was reported that some election candidates viewed the country’s illegal betting market as a more reliable barometer of voter mood than formal polling.)

Nobody knows exactly how registered South Africans will behave inside the voting booths. Political parties have their own internal polling mechanisms, but that doesn’t stop high-ranking politicians from making mistakes. With election results flowing in in 2009, ANC leader Jacob Zuma told crowds that he could “smell 70%”. Smelling was as close as he got to it – the polls closed with the ANC on 65,9%.

In an interview last week, DA leader Helen Zille denied with some irritation that the opposition party was aiming for 30% of the vote. “Where did you hear that from?” she asked. “We’ve never said that publically as an external aim of the party.”

Where we heard that from was the mouth of DA parliamentary leader Lindiwe Mazibuko, who reportedly told AFP in an interview last February that the DA was aiming for 30%. Zille now says this isn’t the case. “We’re not going to get 30%,” she said last week. “Last time we got 16,6%. We’d certainly like to do better than that. I think we will do better than that but we won’t get 30%.”

The Financial Mail reported earlier this month that DA internal polling put the opposition party at 26%. The same polling saw the ANC on 59% and the EFF at 8%.

In the AFP interview last February, Mazibuko also predicted that the ANC could expect a fall into the 50% range, a claim rubbished by the ANC. The ruling party didn’t venture an alternative figure, but said that come election day, they would get an “overwhelming mandate” to stay in power.

The lowest estimate for ANC performance from external polling so far seems to have come from an Ipsos snapshot poll carried out in November 2013 – crucially, before Mandela’s death – which put the ruling party on 53%. DA support was polled at 18%, EFF at 4%, and Agang and Cope at 1% each.

But the latest poll undertaken by Ipsos for the Sunday Times painted quite a different picture for the ANC’s fortunes, at 65,5%. The DA was at 23,1%, EFF remained at 4%, and Cope was on 1,3%. Agang failed to register. Meanwhile Pondering Panda, based on its surveys of South Africa’s youth, thinks that the EFF will take 10% of the vote.

Most people agree that polling is an inexact science, though it’s one of the most reputable ways we have of gauging voter mood before an election. As you can see, there’s a fair range of figures to pick from. To widen the prediction smorgasbord, you might want to add the educated guesses of the country’s political analysts.

In the run-up to these elections, though, analysts seem to have been pretty circumspect about making precise predictions. This isn’t surprising, because it’s brave – or foolhardy – to raise your head above the parapet to give actual figures. Given the possibility of being proved embarrassingly wrong, what’s in it for pundits? An interesting recent piece in the New Yorker on “the peculiar economic incentives of punditry” suggested one answer: “There can be huge rewards in taking a flyer on an extreme prognosis and turning out to be right”.

Furthermore, in media circles mistaken predictions tend to be quickly forgotten, while accurate predictions are long remembered and celebrated. Making one accurate prediction doesn’t mean you’ll necessarily ever do it again, though: “In one fascinating study by the business school professors Jerker Denrell and Christina Fang, people who successfully predicted an extreme event had worse overall forecasting records than their peers,” the New Yorker noted.

But the public appetite for very bold, definite predictions remains extremely high. The New Yorker cites another study carried out by psychologist Philip Tetlock which found that “experts who claimed to be more certain were more in demand in the media, even though they were less likely to be correct”. In other words, if you’re a political analyst before the elections, it’s in your best interests to go big, and trust that few people will remember if you’re wrong afterwards.

Three such brave souls are the Daily Maverick’s own Stephen Grootes, independent political analyst Nick Boraine, and financial services group Nomura’s analyst Peter Attard Montalto. In fairness, all three stressed that their educated guesses had to be seen as just that.

In Grootes’s book SA Politics Unspun, he predicted last September that the ANC would take 61% and the DA 24%, with 3% each for Agang, Cope and the IFP, and less than 1% for the EFF. Do these predictions now keep Stephen Grootes up at night, days away from the big reveal?

“They were always gut feels,” Grootes says today. He makes the point, too, that taking a punt on percentages in this manner is a good way of provoking discussion, which is his job. Since the predictions were made: “The EFF has surprised me on the upside and the DA has surprised me slightly on the downside.” Agang, meanwhile, is “going nowhere”.

Nick Boraine’s predictions, made in November last year, were similar to Grootes’ for the larger parties. He saw the ANC on 62% and the DA on 23%. Smaller parties he predicted splitting 6% between them, except EFF – which he initially had on 8% and subsequently upped to 10%.

Nomura analyst Peter Attard Montalto, who took his punt last August, predicted a poorer showing for the ANC, at 56%, and a stronger one for the DA at 27%. Agang would get 6% and EFF 4%, with Cope at 2%.

It’s clearly the new arrivals to the political scene that cause the most prediction headaches. At one point it wasn’t clear whether EFF would survive leader Julius Malema’s fraud charges; at one point Agang looked like the next big hope to some, before it got all awkward between Zille and Ramphele; at one point Cope didn’t have 23 of its MPs walk out overnight to the ANC.

Given these turbulent times, we decided to turn to people who claim to be actually able to predict the future: psychics. Of the self-termed psychics contacted by the Daily Maverick, three were willing to give us their predictions for the elections next week.

Psychic Tash, who communicated with the Daily Maverick through her personal assistant Bruna, has been reading the “past, present and future” since 1963, with a speciality in analysing handwriting on a psychic level. Tash’s prognosis for the ANC was on the gloomy side – 52 to 55% – with the DA making a more solid showing at 25 – 27%. For EFF, Tash said that “surprisingly the cards are quite strong in their favour”, with a likely outcome of 5 – 7%.

The cards revealed “much confusion” among Agang supporters. Tash sees them coming in at around 1%. “As for Cope,” she said, “the cards are very dark around them. They fall in the past, which I am unable to read.”

Diva Dandrea, who has been doing “predictions and cross-overs” for the past 35 years, used a mixture of “psychic ability, tarot and spiritual guides” to tell us what the election holds. She foresaw a barnstorming victory for the ANC, with an increase on their 2009 showing, to 68%. But all is not well in their future. More corruption on Zuma’s part will be exposed, Diva warned. “Then massive media hype about a run-in between him and yet another well-known female figure (might be Helen Zille)”. Within two years, Diva says darkly, the ANC will lose 40% of its followers.

In Diva’s predictions, the DA is looking weak-ish on 22%, but she sees victory for the party in 2019, led by “an African man”. (Well done Mmusi, sorry Lindiwe.) EFF will take home just 2%, but in two elections’ time Malema will “join forces with another minor political group and reinvent himself again”. Agang, meanwhile, can expect less than a million votes.

The good news in Diva’s books is for Cope, which she says will see a 2% or 3% increase in votes from 2009. (This will be music to the ears of leader Terror Lekota, who on Tuesday publically offered to eat an actual hat if the party’s votes do not increase in these elections.) And there’s more good news to come: “A politically well-known Indian lady will join this group in the next two years. Many of the staunch ANC supporters will shift over to this political group.”

Lastly, Jenny Ren – with 20 years’ experience as an “internationally-acclaimed psychic, clairvoyant, medium and astrologer” – swung her pendulum for the Daily Maverick. (That is not a figure of speech; an actual pendulum.) Ren’s pendulum seems to have quite an arc. Her outcomes have some fairly drastic ranges, with the ANC at between 40 and 90% in different provinces and DA swinging between 20 and 67% in different provinces. EFF can look forward to between 0 and 36% in different provinces (presumably 0 is the Western Cape), and Cope again is sitting pretty on between 6 and 46%.

As for Agang, “the pendulum first showed troubled times for them,” Ren warned. “But then between 7 and 55% in different areas.”

In Ren’s view, there’ll be champagne for everyone when the results are tallied. “I also did a tarot card for them, and generally speaking each of these parties will be pleased with their individual progress, even if for some it is a little progress,” Ren said. “And the ANC will be pleased that they have the majority.”

There we have it, folks: there’s everything to look forward to. DM