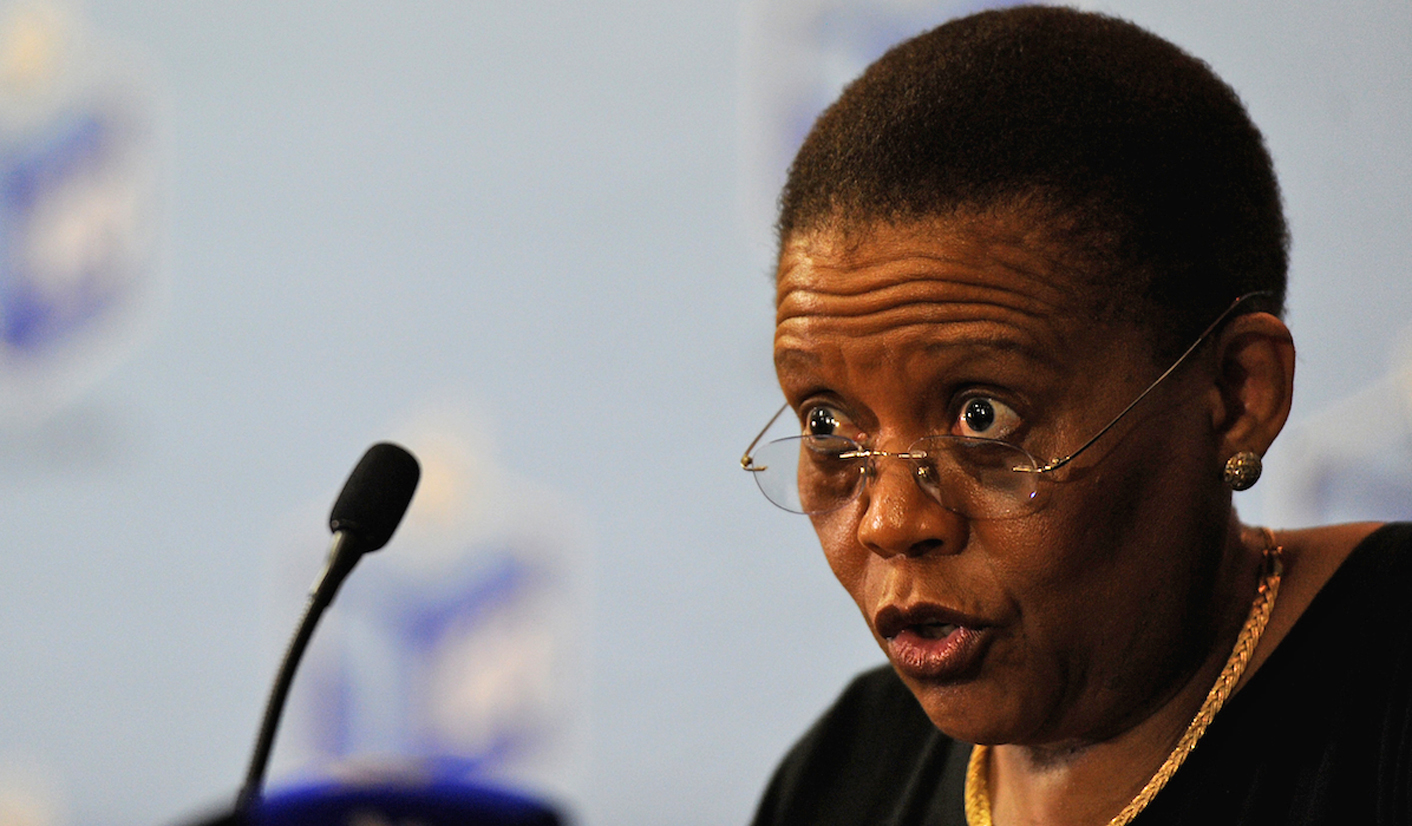 While the elections of 2014 will no doubt be remembered for the antics of a man soon to be sequestrated, what is bound to linger is that they marked the beginning of a loss of innocence of the Independent Electoral Commission (IEC). A cloud hovers, brought by the findings of the Public Protector that IEC Chair, Pansy Tlakula, is guilty of maladministration due to her role in a scandal surrounding a lease for a new headquarters for the IEC and that ended up going to a company in which she had a role. On Tuesday, five of the smaller opposition parties are going to court in a bid to remove her. On Monday, after weeks of claims against her, she hit back. By STEPHEN GROOTES.

I have made it clear before that I have huge respect for Advocate Pansy Tlakula, and that I find myself almost emotional having to cover a story that she may be guilty of some kind of wrongdoing. It’s hard to drop the cynical journalist façade, but in a country where so many people are set up as heroes and then fail, she was a rock one could cling to. So, when the opportunity arose to interview her about claims and the case against her as well as the fact that she is refusing to step down (even temporarily in the face of this legal challenge) I jumped at it. It was a chance to throw every single thought I had at her and give her an opportunity to respond.

The problem with interviewing someone like Pansy Tlakula is that you are interviewing Pansy Tlakula. She is not some grubby politician, where even if you don’t prepare properly or when they are able to “win” an interview, they will still be judged on their grubby track record.

In Tlakula’s case you are interviewing someone who has a proven track record of integrity, an individual who has done an immense amount for the country. And, it goes without saying, someone with infinitely more brains and experience than you. But you throw the book and hope for the best.

The first question after explicitly mentioning that “there are some questions I have to ask you about the situation you find yourself in” and hearing her laughing slightly in reply (a laugh indicating she knew very well what was coming next) was why she believed she should remain in the position. Her reply was fairly direct. She said she “was the same person who I was when I was Chief Electoral Officer in 2009, and the Municipal Elections”. She also pointed out that the lease deal in question was signed in 2009. The subtext of course is that we all accepted those election results and her role in proclaiming them.

That is, obviously, true. But there is, surely, a deeper issue. Which is that we didn’t know then what we know now, that she was, according to the Public Protector, guilty of maladministration. Which surely changes the game? But she does make a point.

Then I asked what I would call a “box-in move”, a question designed to put the person in a position from which it is difficult to escape.

“The claim of the opposition parties,” I said, “is that the person in your post – the person who bears ultimate responsibility for the credibility of these elections should be totally clean and transparent. They should be a person who does not have any question marks to their name whatsoever. Do you believe South Africans do not deserve someone who has no questions about their integrity to be in this job?”

Tlakula escaped from that one with ease. “They do,” she replied, “but the question here is different”.

She explained that it was about her name and whether there had been questions asked about the legitimacy of the elections with her at the helm and whether anyone really believes she would throw an election.

So far, no one of importance had made that suggestion in any explicit way.

The next point that had to be made was might it not be better for her to step down temporarily, as several commentators in the media (including myself) had suggested? Her response was simple. What would happen then, if the Electoral Court found that there is no reason for her to do so? That in fact there is no question to answer?

But she could be accused of ducking the central issue. And that is that it has never really been about legalities but rather about perception. And the problem is that five opposition parties, all of them relatively small, but five of them nonetheless, have a perception that these elections could not be legitimate with her in charge. This takes us back twenty years when Professor Steven Friedman was asked to draw up a test of whether an election is free and fair and legitimate. Friedman and his team determined that the true test is whether the loser accepts the result. If they do, then it is. Obviously the winner will always accept the result.

Now we have a situation where five parties, not one, but five, are heading to court before the election. This is surely not a good situation. When this point was put to Tlakula, that these parties might not accept the result of an election she presides over, her answer was that they have not yet rejected the result and we needed to wait until after the election to see if they did.

This is where, in my view, we are heading for trouble. It is, as Friedman himself pointed out on Talk Radio 702 a few hours after the interview, surely better to avoid that kind of situation in the first place. As he suggested, the situation is complicated even further by the presence of the Economic Freedom Fighters. Its leader, Julius Malema, has hinted in his usual understated way that there will be “civil war” if Tlakula doesn’t step down. It would be typical of his behaviour up until now for him to refuse to accept the result of an election. Especially when his party gets a far lower percentage than he, as the political mind of our time, has predicted.

Of course, Tlakula could respond that she shouldn’t be stepping down in advance of hypothetical situations and particularly just because of someone like Malema. The fact is that as the gap between the governed and the governors grows, the chances of more radical political leaders coming to the fore increases and they are always more likely to reject some of the formal voices of our democracy, such as the IEC.

But we still shouldn’t be giving them ammunition.

We should not be making it easier for those voices to make that case. We should make it harder for them, by behaving better, by having higher standards than they do.

It is, once again, about that old problem in our politics, the difference between morality and the law. Tlakula is correct in saying, as she does, that there was no law against getting into business when she did and there is no law against it either now. But it may have been right not to.

She should have, as the head of the Independent Electoral Commission (holding perhaps the most important job in the country barring the President, Chief Justice, and a few others) said, “I shouldn’t do anything else”. Nothing, no amount of money in the world, is worth putting our elections in any kind of jeopardy.

Listening back to the interview, I kept coming returning to a certain sound byte. It is simply this, “I will not leave until I have cleared my name. And I am prepared, Stephen, to go to any lengths to clear my name; until I have done that, I’m going nowhere.”

There is something in those words that I find disturbing somehow. “Any lengths” is a very long way indeed. Especially when there is an election at stake. DM