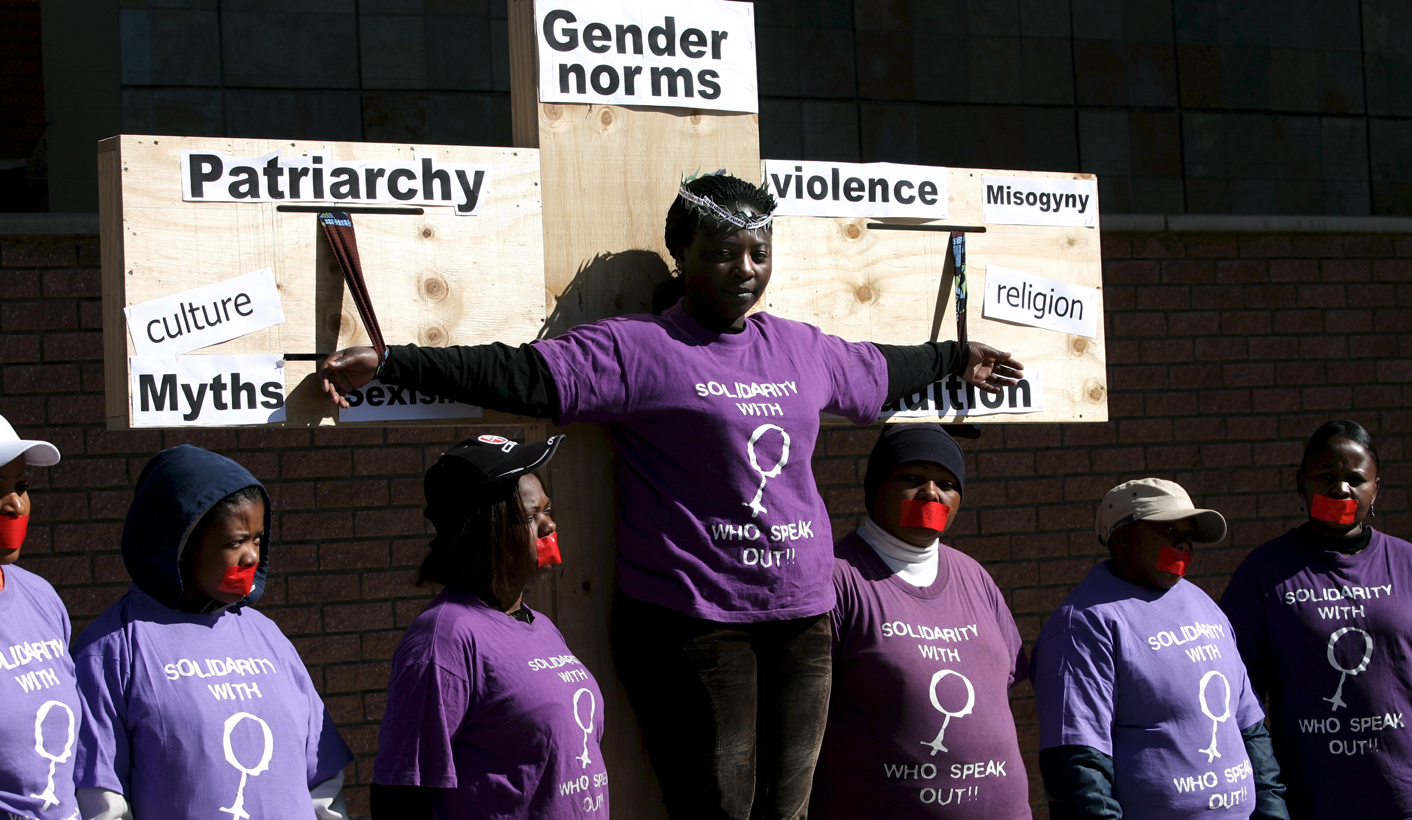 For anyone who is concerned about gender equality, it is significant that patriarchy is not raised by any political party in their election campaign. One understands the silence of the patriarchs who lead or hold prominent places in the ANC and its allies, but what of the organisations that purport to oppose the Zuma project? By RAYMOND SUTTNER.

We live in a society where violence is omnipresent. That violence is gendered, almost entirely masculine attacks; on other men, in private action by thugs in the streets or men attacking women in their homes and other places.

It is also manifested in readiness of authorities to assault or open fire. Before Marikana, government ministers and police chiefs were ready to use deadly firepower. There had been rhetoric in the Thabo Mbeki presidency, through Susan Shabangu amongst others that encouraged this.

But incitement has heightened during the Zuma presidency, where use of force is a daily occurrence. Footage shows police gratuitously beating up patrons of shebeens. Police dragged taxi driver, Mido Macia, at the back of their van for miles and then beat him to death. Police undress people in public and assault them.

Some have been convicted but the extent of such violence goes well beyond what is prosecuted or what leads to conviction because it is hard to build a case against police since one depends on their colleagues to take it up and files often go missing, or there is contemptuous dismissal of a complaint.

The complainant in a court case stands against other police who can be corroborative witnesses for their colleagues, while the complainant may stand alone.

This is the official violence of the state, manifested in a way that shocked the world at Marikana, violence that is the subject of a commission of enquiry, whose work is being undermined by police attempts to conceal evidence or doctor the scene of the killings, by planting weapons and other tactics.

This violence forms part of a cult of violent masculinities, which is buttressed by imagery of men who are worthy of admiration for being rough, tough, ‘take no nonsense’ types. This was manifested very clearly in the Police Commissionership of Bheki Cele, now a leading ANC candidate for Parliament. This led to the remilitarisation of the police, becoming a force who would treat crime not as a social problem requiring an array of modes of treatment and control, but to fight the ‘war’ against crime, a war, which regrettably or ‘inevitably’ leads to some innocent people being caught in the crossfire and killed.

To defend our constitutional rights, we need protection against such state violence, the most powerful form of patriarchal violence. But patriarchal violence is everywhere, nowhere is safe. Women are counselled not to walk alone in the streets. In other words, their constitutional right to freedom of movement must be sacrificed in order to avert attacks by men. Women must barter their right to move freely for the supposed safety of the home.

We know, of course, that very many women are beaten or raped in their homes. Often, police do not want to hear such complaints because it is treated as a family matter, violence or rape of one’s wife being seen as a de facto right.

Patriarchal violence is also manifested in attacks on gays, lesbians and others who practise forms of sexuality that deviate from ‘compulsory heterosexuality.’ Those who do not conform to patriarchy’s treatment of heterosexual relations as the only normal or natural sexuality, pay heavily.

Zuma articulated homophobic views after his rape acquittal, but also through his elevation of motherhood as the only ‘normal’ way of realising womanhood.

There are repeated cases of ‘corrective rape’, where men rape lesbian women in order to teach them to be ‘proper women’, to understand what the ‘natural’ way of having sex means. Also, gay men and others who do not conform to dominant conceptions of masculinity fall victim to violence and the law fails them much of the time.

It is reported also that many such complainants, practising homosexual or other sexual orientations that are seen as ‘unnatural’ also encounter many doctors and social workers who have ‘outed’ such people in communities where their sexual identity is threatened.

Apart from the president’s position, there is a powerful lobby that is ambivalent about gender equality and freedom of sexual orientation. They include ministers, one of whom Lulu Xingwana found a lesbian photographic exhibition to be pornographic. Outside of government the churches that have embraced the present government are primarily charismatic ones that are highly patriarchal and regard women as there to serve their menfolk and see alternatives to heterosexuality as equivalent to bestiality. Traditional leaders, now enjoying an enhanced status, have also forthrightly warned of action against homosexual conduct.

Anyone who seriously contests the meanings and dangers of the current political order must address patriarchy in all these manifestations. That there is silence is telling. DM

Professor Raymond Suttner, attached to Rhodes University and UNISA, is an analyst and professional public speaker on current political and historical questions and questions of leadership. He writes a regular column and is interviewed weekly on Creamer Media’s polity.org.za. Suttner is a former political prisoner and was in the leadership of the ANC-led alliance in the 1990s. His email is: [email protected] and on twitter he is:@RaymondSuttner. He blogs at raymondsuttner.com.