No Vote: A mission to nowhere for apathetic ANC voters 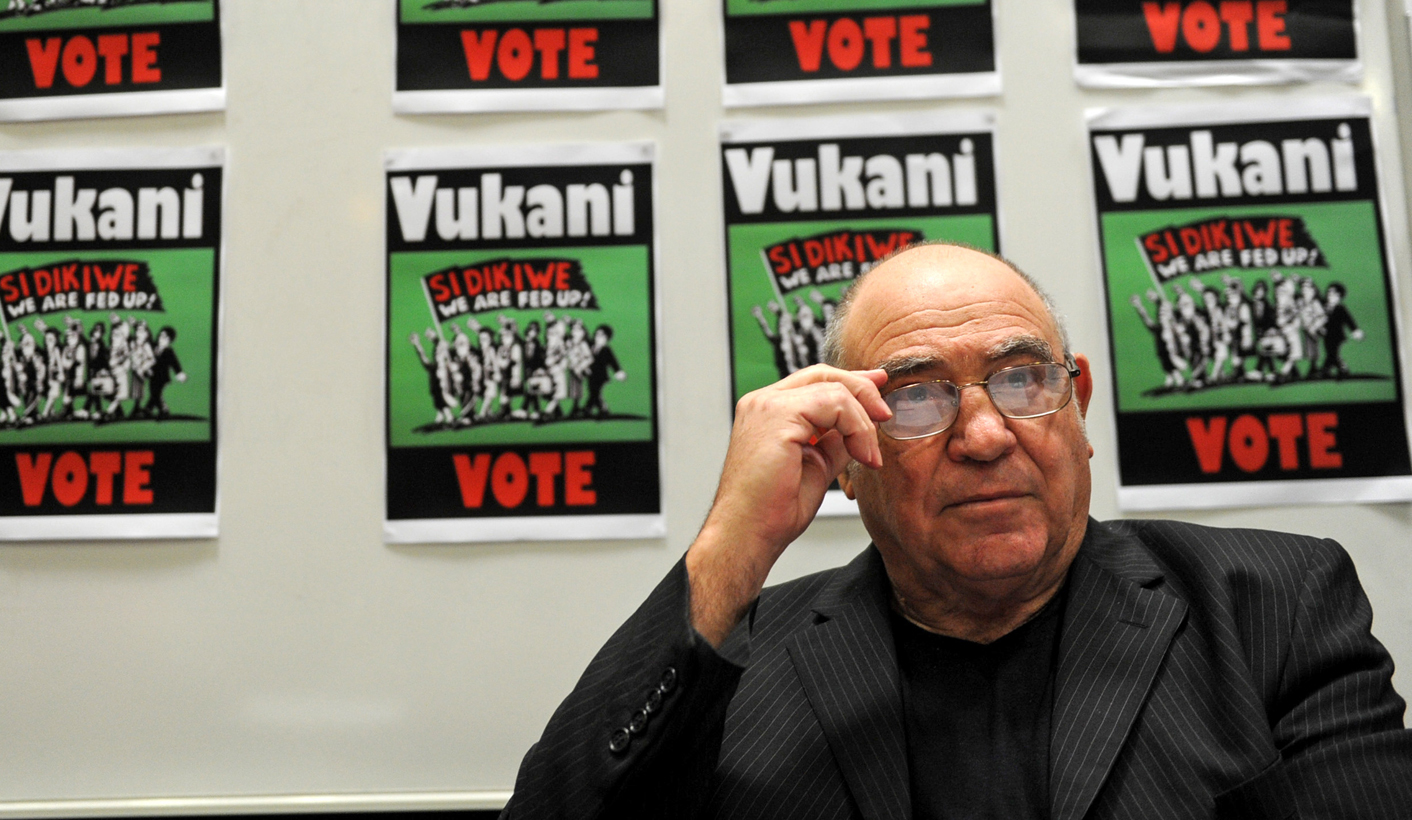 The defiance vote was always going to be the wild card in the 2014 elections. The question was how would it manifest itself. The post-Mangaung ANC and the performance of the Zuma administration have caused unprecedented turbulence and disenchantment within the ruling party. The Economic Freedom Fighters has become a channel for some of the anger against the ANC, but many respected, staunch members are at a loss about what to do with their vote. Now a handful of veterans, academics and activists have come up with a “Vote No” campaign as a stopgap measure until a better alternative comes along. Desperate times, desperate measures. By RANJENI MUNUSAMY.

Had the “Sidikiwe! Vukani! Vote no” campaign started a year ago, taking on board the losing faction from the ANC national conference in Mangaung, those fed up with the monocracy in the South African Communist Party (SACP) and the disgruntled sections of Cosatu, it might have grown into a significant force. It might have had the impact it seeks to achieve and created a bloc mounting a rebellion within the ANC. After all the purpose of it is not really to impact the election result but to send a message to the ANC in the hope that it would self-correct.

The group, led by former intelligence minister Ronnie Kasrils, is running a shotgun defiance campaign to marshal the disillusionment within the ANC. They are calling for traditional ANC voters who can no longer vote for the party in good conscience to either spoil their ballots or to vote for a minority party. The tipping point was the security upgrades at President Jacob Zuma’s Nkandla’s residence, but a number of factors have apparently pushed them into the campaign including the Marikana massacre.

The problem is that none of the people running the campaign are active in the ANC and have not been for some time. Kasrils was intelligence minister at the time of the ANC’s Polokwane conference in 2007. Legend has it that he had assured former president Thabo Mbeki that the balance of support at the conference tilted in his favour and that he would retain the presidency of the ANC. This was obviously not true and power changed hands to the Zuma faction.

When Mbeki was recalled as state president in September 2008, Kasrils was among the Cabinet ministers who resigned in protest against the ANC decision. His anger against the ANC therefore has been brewing for several years. Kasrils has become a vocal critic of the ANC since his retirement, particularly after the Marikana massacre.

His outrage over Nkandla was not unexpected but his move to stage a protest campaign against the ANC is certainly a dramatic move given his formidable history in the liberation movement. Had Kasrils defected to another party, it would probably have been less stunning than campaigning for people to spoil their ballots or vote for any minority party.

The co-founder of the campaign, Nozizwe Madlala-Routledge, has also been absent from active politics since her dismissal as Deputy Health Minister in August 2007. She too has a notable history in the ANC and SACP. Madlala-Routledge was fired because she clashed with then-Health Minister Manto Tshabalala-Msimang over Aids denialism and alternate forms of treatment for HIV. She had no spat with the Zuma faction in the ANC, however, and was elected onto the ANC national executive committee at Polokwane.

But Madlala-Routledge says she also become disenchanted with the ANC and has not been to a branch meeting since 2009. Like Kasrils, her involvement in the “Vote No” campaign will not make significant ripples in the ANC as they have surrendered their constituencies and cannot command action in ANC structures.

What the move does do, however, is put the issue of disillusionment within the ANC firmly on the agenda. Kasrils and Madlala-Routledge are well aware that the handful of people speaking out against the state of decline in the ANC are by no means the only ones who feel ashamed and disaffected. The outcome of the Mangaung conference with the overwhelming victory of the Zuma camp shut the door on debate within ANC structures. The leadership is unchallenged in the controversial positions it has taken, particularly on the many scandals that have dogged the ANC government.

The result is that significant numbers of ANC members – there’s no telling how many – from veterans to activists to former Umkhonto weSizwe (MK) combatants have pulled away from the ANC, but their attachment to the party means they cannot find a political home elsewhere. Had the Congress of the People not turned on itself and wilted, it probably could have drawn the vote of some of these disaffected ANC members. But as things stand, the only real option for ANC people who cannot vote ANC is to vest their support for Julius Malema and his Economic Freedom Fighters (EFF).

The EFF itself is possibly the boldest form of defiance against the ANC. For those wanting to punish the ANC and show their absolute revulsion for the Zuma-led government, putting Malema in an opposition bench in Parliament to hound the president and the ANC seems like the best answer. The EFF is also born out of the ANC, so it is the closest thing to the ANC itself. But Malema is untested in parliamentary politics and there is no telling how he will perform. Besides, many respected ANC members might find difficulty in supporting the firebrand leader who is facing corruption charges and is in trouble for tax evasion.

Mamphela Ramphele, the leader of Agang, could have also tapped into this disgruntled constituency in the ANC had she not sidled up to the Democratic Alliance (DA). She is probably the best articulator of all the problems the ANC has but her political somersaulting made her out to be the DA’s black duplicate. As much as the DA has transformed itself over the past few years, ANC stalwarts and long-serving members across factions still find it difficult to vote for Helen Zille’s party. Even with heavy cosmetic surgery to the DA’s top leadership, people who come from the ranks of MK, the United Democratic Front and who belonged to the pre-liberation ANC still view the DA as a white party.

Other smaller parties could hold appeal for individual disgruntled ANC members but there is no one party that can draw the entire bloc. What Kasrils and Madlala-Routledge have provided is a temporary remedy for chronic disappointment with the ANC. While they claim that spoiling ballots is still an expression of democracy, it does not translate into representation in Parliament after the election. So while the number of spoilt ballot might increase, or support for minority parties who might not make it to Parliament might increase, the ANC’s majority is not tampered with.

In the 2009 elections, the number of spoilt ballots was 239,237. This was higher than what the Independent Democrats, the United Democratic Movement and the African Christian Democratic Party all polled. Many of these could have been mistakes, but a portion of the spoilt ballots would have been by voters who did not want to vote for any party. The “Vote No” campaign now wants to push this number significantly higher.

The campaign certainly has received widespread attention. The ANC has condemned the move by its former members and resorted by demonising and trashing them. Several ANC veterans have also voiced their concern and pointed out that it is hardly a solution to the problems besetting the ANC. Even Zuma, who is mostly unresponsive to current developments, has spoken out against the campaign. While the campaign does not seem to be drawing more high-profile support, it certainly has received a lot of media attention over the past few days and has occupied the national discourse.

The question is whether a higher than usual percentage of spoilt ballots in next month’s election will jolt the ANC. The ANC is notorious for dismissing criticism as simply “anti-ANC” – even from its own. When it comes to subliminal messaging, the ANC has grown blind to it. Sixteen months later, hardly anyone in the ANC can explain what it is Deputy President Kgalema Motlanthe was trying to do in Manguang by contesting the ANC presidency but not campaigning for it.

Kasrils and company are hoping their campaign resonates and catches fire, and perhaps will translate into something else after the election. As things stand, the obvious trajectory for this disgruntled bloc in the ANC is to coalesce with forces on the left, most notably the metalworkers’ union Numsa, to form a new workers’ party.

For now, however, it appears to be nothing more than a group of tormented people, adopting a tough love approach in the hope that the ANC will admit its faults and go into political rehab.

But the ANC will not do so. The ANC is concerned with the preservation of its electoral dominance, not with notes on the margin. The only way to get its attention is if defiance within the ANC builds to such an extent that it causes a significant downward slide to its numbers.

To do that, the “Vote No” campaign is too little, too late. DM