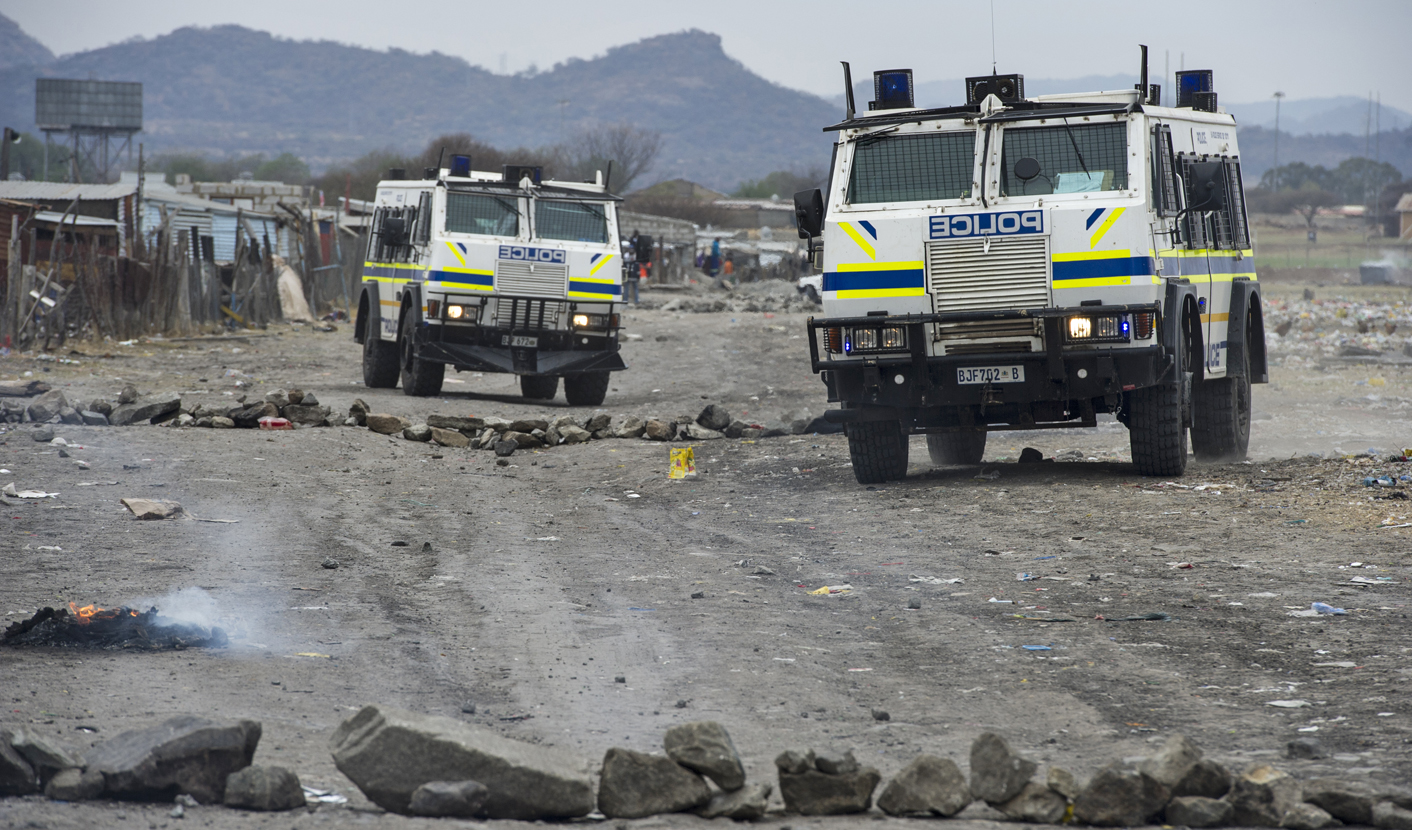 The Marikana Commission of Inquiry, which has been running for almost 18 months, has so far focused on the week leading up to 16 August 2012, during which 44 people were killed, with many more injured and arrested. On Monday, the public saw the first event relating to phase two of the investigation, which will look into the socio-economic conditions that led to the tragic week in mining. These are the issues which, if left unchecked, could cause continuing violent unrest. By GREG NICOLSON.

Phase One of the Commission has seen evidence relating to the tragic week at Marikana presented and cross-examined by the various legal teams in retired judge Ian Farlam’s inquiry. The events are specific and the questions direct and the Commission establishes who did what, when and why as 44 people were killed, around 70 injured and 270 arrested in the week before the massacre. But Farlam is also tasked to look at the broader issues at hand. These matters don’t always lend themselves to judicial methods, explained evidence leader Advocate Geoff Budlender on Monday as he was opening a seminar on bargaining arrangements in the platinum industry.

The Commission will host at least three seminars on issues relating to the broader environment causing the unrest and violence in Marikana. It’s also taking submissions on the topics from interested parties and the public. Some evidence relating to phase two of the inquiry will also be heard at the Commission and cross-examined.

The first seminar, held at Wits University, discussed bargaining arrangements – Marikana was essentially a wage dispute as workers demanded R12,500 a month from Lonmin Platinum. The Department of Labour’s director of collective bargaining Ian Macun was the first presenter, focusing on workers bypassing unions. During 2012, employees across the platinum belt expressed disgruntlement with majority union the National Union of Mineworkers (NUM) but were yet to make the transition to the Association of Mineworkers and Construction Union (AMCU), leading to the rise of workers’ committees.

Marikana has to be looked at in relation to a context of poor living conditions, low incomes, and poor workplace treatment that can lead to spontaneous worker action, said Macun. The critical question is: “Has change in the South African workplace really gone far enough?” Workers bypass their union when the union might not be able to represent them (if it’s not recognised, for example), if the union is failing to do its job, or if there’s not enough time to get a union mandate on an issue. Government argues that strong union representation is positive in the workplace, he said.

So what’s to be done to avoid workers going it alone? Communication is the key, and stakeholders need to look at other ways of discussion outside the traditional union and employer framework. Trade unions need to accelerate regeneration, do their jobs and communicate with members. Finally, we need a debate on the majoritarianism principle underpinning labour relations laws, which recognises the majority union but largely leaves others out of bargaining discussions, said Macun. It’s argued that by recognising only majority unions, aspirant unions, like AMCU, must enter a winner-takes-all battle to be heard.

Professor Sakhela Buhlungu, dean of humanities at the University of Cape Town, spoke next and criticised the failure of unions. “Some of these unions have become victims of their own successes,” he told an audience of around 100 people. “In many ways it is the house of Cosatu that is in trouble.” He divided unions into small, medium and large and focusing on the latter cited their success, power and influence. Large unions, however, have become a breeding ground for leaders in business and politics, adding to perceptions of distance between leadership and members. Shop stewards get close to management and lose their members’ trust. Workers in mine shafts feel abandoned as their leaders lose touch.

Now, we’re seeing a return of ungovernability last seen before the rise of organised labour during the Apartheid period, said Buhlungu. “It’s come back to haunt us now,” he said, adding that it’s not just in the mining industry. Workers are looking to the “five madodas” system – unofficial groups of trusted worker leaders – rather than shop stewards who can be seen as sell-outs. While union organisation is weakening, management’s expertise in negotiating is also diminishing and failing to adhere to basic principles of wage discussions, said Buhlungu.

John Brand, a mediation and arbitration expert from Bowman Gilfillan Attorneys, sent a presentation on the Labour Relations Act which was presented in the seminar. Industrial relations democracy has been undermined by recognising majority unions and excluding smaller unions, which can promote violence between unions, he argued. He recommended that thresholds for recognition be lowered, independent ballots recognise union membership at the workplace, implement strike ballots among members, and allow the courts to make strikes unprotected if they turn violent.

The audience included a range of stakeholders from government, academic, labour, business and even police. SAPS North West Deputy Commissioner William Mpembe, who hasn’t shone at the Commission, even threw in a question. Questions and responses alluded to serious problems in the labour relations system. Unions are failing to represent workers and have allowed too much of a gap to grow between leaders and their members. Employers are not only part of that problem, providing careers for shop stewards as they move away from their members, but they also fail to change within a dynamic labour environment. Government has done too little to modify the legislative framework.

It’s about the choices made in the last 20 years, said Buhlungu, and labour relations stakeholders were warned some of these problems were coming. They did little about it. Phase two of the Marikana Commission needs to describe clearly the environment that caused the violence and unrest. With another strike across the platinum belt, the situation looks destined to remain the same until the systemic problems can be tackled.

In the coming weeks, the Commission will hold seminars on the migrant labour system and strike violence. DM