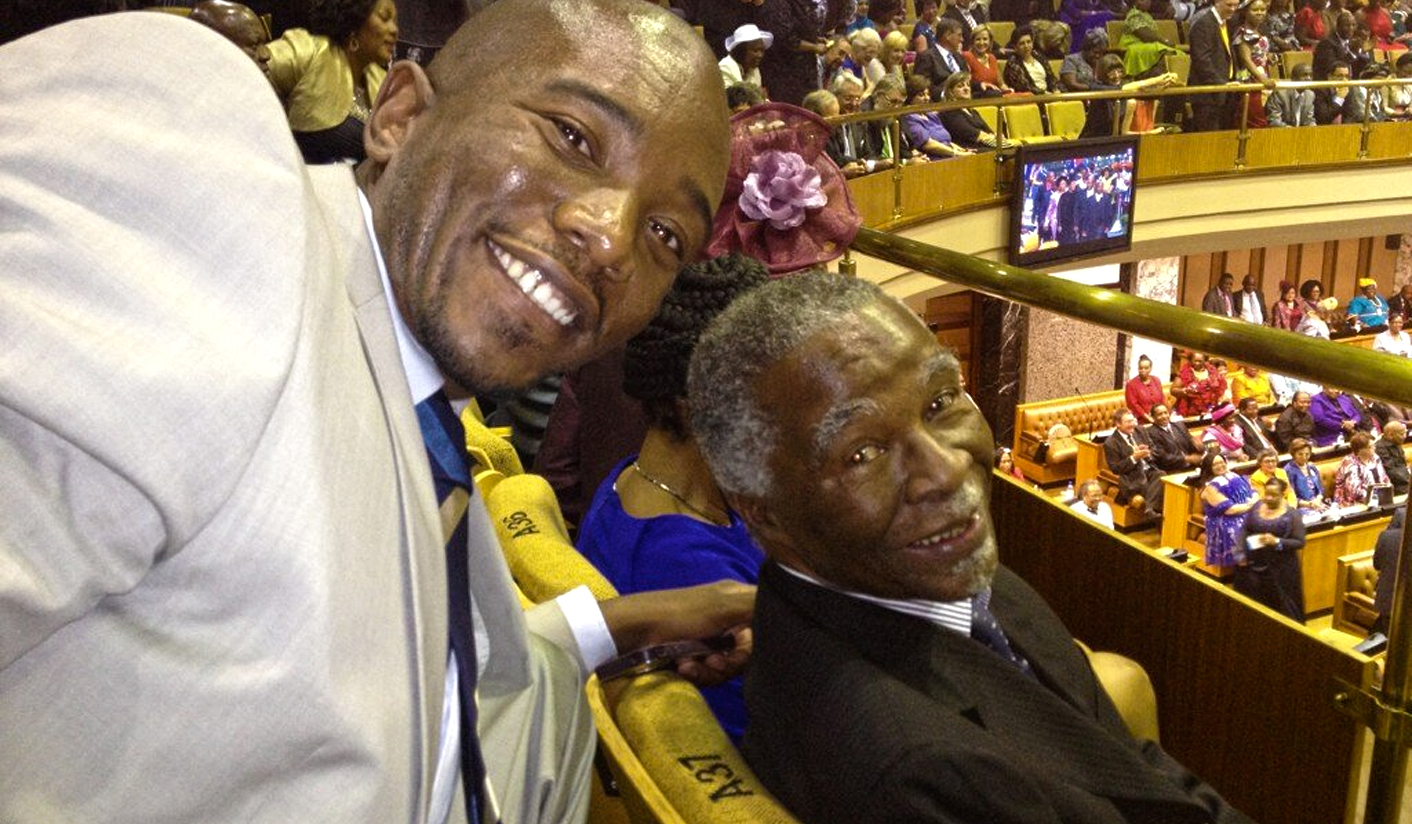 As we've been inching closer to a certain date with a certain Ms Destiny on 7 May, our politicians have been doing their usual odd and unpredictable dances. Some have twirled with Agang, others have rumba-ed with the EFF, while still others are doing a slightly indecent samba with the ANC. But perhaps the most interesting - and difficult to understand - waltz has been that of the DA and one reluctant dance partner. Thabo Mbeki is suddenly being used almost as a campaigner for the DA, and surely without his permission. Why? By STEPHEN GROOTES.

Over the last few weeks the DA has appeared to be using Mbeki’s name, almost in vain. It’s been done quietly at first, but in a post-Nkandla situation, it’s becoming slightly more strident. Just last week the DA’s spokesperson, premier candidate for Gauteng, and possible heir apparent to Helen Zille, Mmusi Maimane, put it all rather bluntly:??”I put it to you today that the good story the ANC had to tell ended when Zuma’s ANC recalled Mbeki from office for daring to fire Zuma for corruption.?It ended when Zuma’s ANC bullied the National Prosecuting Authority to drop corruption charges against President Zuma.?It ended with Jacob Zuma’s election in 2009.”

Once you’ve got past the fact that Barack Obama and Maimane’s speechwriters are possibly clones, the language is really quite stark. The comment was made during a speech in Bekkersdal (made famous by the Nomvula Mokonyane quote that the ANC “doesn’t need your dirty votes”). The quote is taken from prepared text – in other words, it was deliberate.?And it’s not the first time that the DA, and Maimane in particular, has done this. In an online statement a few days before Maimane made this comment, the DA said:?”What has happened to the ANC? The ANC has changed.?It is no longer a party of Mandela, Tambo, Sisulu and Mbeki.”

To the careful political ear, this sounds like a deliberate strategy. And it doesn’t require an entire afternoon in the firepool reservoir to work out what is at play here. The DA knows that the ANC has a major problem with Nkandla, and this is an attempt to make the idea of voting for them more palatable. It’s about trying to make the jump from the ANC to the DA easier for the real battleground of this election, the black urban middle class.?In short, as I’ve suggested before, if you can predict who the 1,311,027 people who voted for Cope in 2009 will vote for in 2014, then you can predict this election.

It seems pretty safe to assume that most of the 7.66% of voters who opted for Cope back then did so because they didn’t like the idea of the ANC under Zuma, and were pretty pissed that Mbeki was recalled. Over the last five years, Zuma hasn’t really done anything to change their minds about him, and therefore they still don’t have a reason to vote for the ANC again just yet.?And of course, Nkandla being Nkandla, and the ANC’s response to it being all about raising security walls around Number One, it’s probably even harder for those Cope voters to cast a ballot next to Jacob Zuma’s smiling visage now.

The DA’s critics, and there are many both inside and outside Luthuli House, could well argue that this is all opportunistic. That it’s all just capitalising on the own-goal of Nkandla, and will go away. They would be wrong.?Just over a year ago, I was at the State of the Nation Address in Parliament. Following an incident the year before involving lateness on my part, the parking lot under Parliament, a Chief religious leader, and Fikile Mbalula, I thought it best to make sure I was actually inside the National Assembly the required hour before the speech started. Also punctual was one Mmusi Maimane, and thus we walked in together.

Those of us who saw us might have thought we were gossiping about serious politics. But both being dads, it was more likely to have been a discussion about the varying quality of nappy one can get at a 24-hour service station in an emergency.?At some point we separated; he seemed to be in a hurry. I left for the less than rarefied but always entertaining press bay. He, it turned out, went somewhere more glamorous.?Somehow, he managed to talk his way into what was probably the President’s Bay. And once there, he was able somehow to talk to Thabo Mbeki. And then, by hook or by crook, he took a picture with him. And, of course, tweeted it.

At the time, I simply couldn’t understand it. Why would Maimane, a young man, working for the DA, becoming one of its major symbols, work so hard to get a selfie with the former leader of the ruling party? If you like Mbeki, it makes him look like some kind of sycophant, and if you don’t, it just makes you look desperate. Either way, where was the benefit, especially after a considerable effort to pull it off?

Being, as my wife puts it so often, slightly slow, I am only now finding the dust is clearing in my mind. Maimane had spotted a golden opportunity to associate himself with the one person who is a huge part of the ANC, but that Zuma’s ANC can’t use. It’s about triangulation, about making sure that the people who once were natural ANC voters realised that their next best option was actually Maimane himself. It was carefully targeted politics of association at its best.?In retrospect, this could have been evidence that actually this was part of a very well and long ago thought-through strategy. That if in 2014 you wanted to target those who voted for Cope in 2009, you had to start early. And then, as Zuma has continued to distance himself in one way from the ANC of Mbeki (in terms of corruption), you would start to stake your claim more and more often, in more and more obvious ways.

Now, as we get to the crunch end of the elections, Mbeki himself has started to help the DA, presumably without really meaning to. He has also joined those ANC veterans (apologies to Trevor Manuel; he’s still a young man) who have criticised Zuma’s behaviour during Nkandla, him rather close to Maimane’s comments on the issue. As a result, this triangulated closeness could end, considerably strengthening the DA’s case to these floating Cope voters.?While Nkandla has been a gift to opposition parties, it’s not nearly as simple as saying that Nkandla has happened, Zuma is guilty, and therefore the DA will get more votes. The DA has had to provide a reason to vote for it. This use of Mbeki could well turn out to be part of the mechanism that provides that reason.?Either way, it’s pretty good politics. And the ANC’s Chief Super-Glue, Gwede Mantashe, must be watching it with some admiration, if not much joy. DM

Grootes is the senior political reporter for Eyewitness News, and the host of the Midday Report. He’s also the author of SA Politics Unspun.