Marikana Commission: A cop who stands for truth and accountability 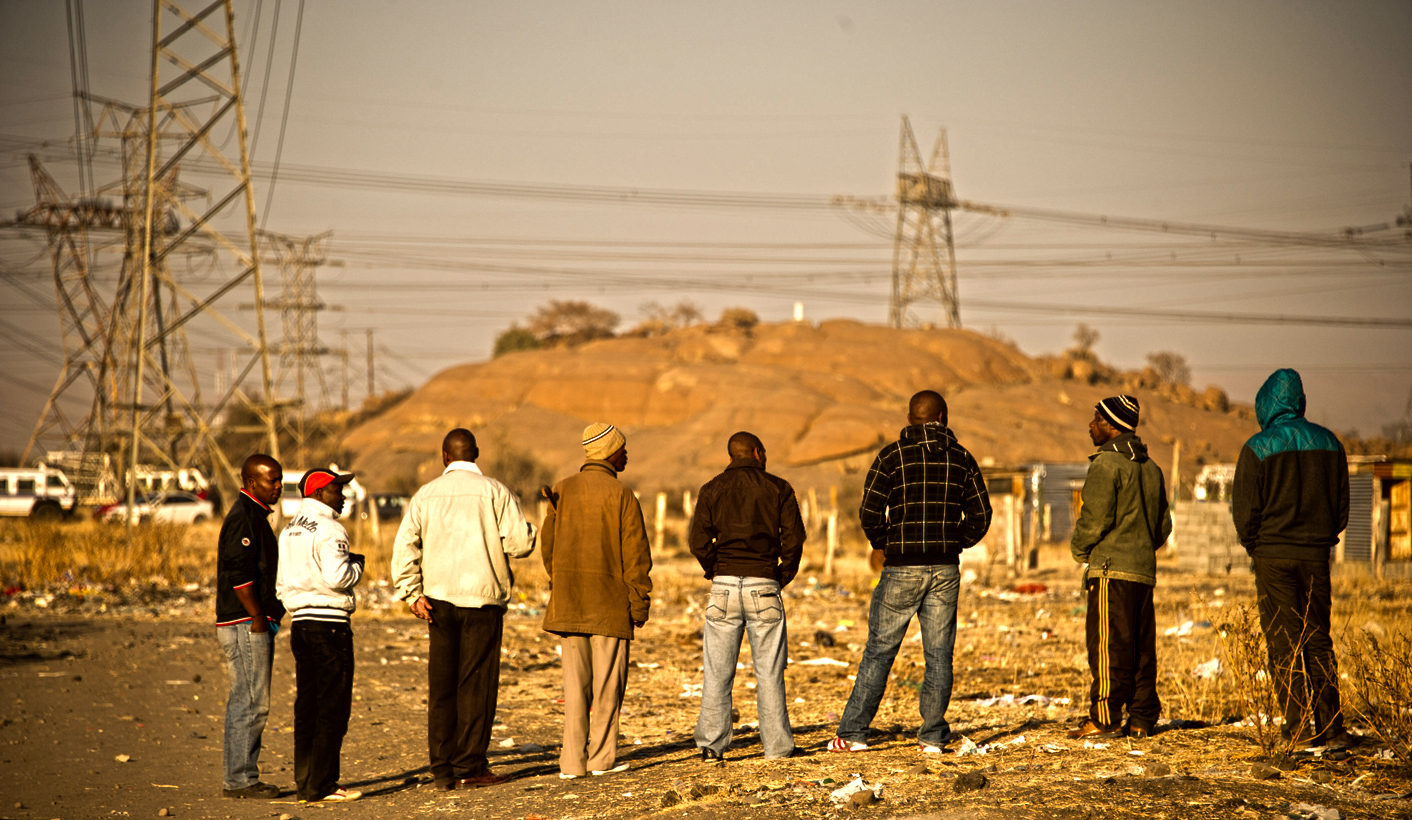 It's hard to imagine a story that could snatch headlines from Oscar Pistorius and Nkandla, but Lieutenant Colonel Salmon Vermaak has put the Marikana massacre back on the front page. The air-wing commander had a bird's eye view of the events and having broken ranks with the top brass, he's now flying solo. The dissident cop describes a Marikana operation of incompetence, brutality and cover-ups that reach the highest levels of South African policing. By GREG NICOLSON & THAPELO LEKGOWA.

13 August 2012, death toll: 10. Violence erupted days earlier when Lonmin Platinum workers turned on each other. The National Union of Mineworkers was fracturing, workers’ committees were forming and the Association of Mineworkers and Construction Union (AMCU) had been rising in the platinum belt throughout 2012. Organised labour at Lonmin had fractured, turning the area into a battleground. But it was Monday the 13th when the narrative, forever tying the SAPS to Marikana, began. Police failed to disarm the striking mineworkers as they moved through the area, leading to the officers Tsietsi Monene and Sello Lepaku being hacked to death.

In an explosive testimony to the Marikana Commission of Inquiry this week, Vermaak, who was watching the scene from a helicopter, described what happened. North West Deputy Provincial Commissioner Major General William Mpembe was on the ground. He gave no briefing before the incident. Protesters were walking peacefully and cops didn’t have protective riot gear or their shotguns, used for rubber bullets. Mpembe instructed them to leave the shotguns, Vermaak had heard, so as not to provoke the workers. “We were shocked to see tear gas and stun grenades,” the Lieutenant Colonel told the Commission. No order was given on the radio. It was then that all hell broke loose and the two officers were killed.

Mpembe has denied he gave an instruction to fire teargas, despite reports it was his orders that sparked the violence. When Vermaak and officers at the scene confronted him about it during an SAPS meeting in Potchefstroom to compile their evidence, the deputy commissioner threatened to lock them up for defeating the ends of justice. Meeting the mineworkers without the proper equipment was unsafe, said Vermaak. If he’s to be believed, members of the Tactical Response Team (TRT) agreed. When Vermaak arrived on the scene, Mpembe was hysterical and had to be removed because the cops blamed him for their colleagues’ deaths and threatened revenge.

Why is this important? The Marikana Commission needs to investigate what happened in the days leading up to the massacre, before which 10 people were killed; what happened on 16 August when 34 people were killed; and test the evidence compiled and submitted after the fact. Mostly, police witnesses have supported claims they were following a plan to disperse and disarm and only engaged the protesters with live ammunition when their lives were threatened. Vermaak, however, describes an operation that lacked the necessary experience and planning and police who were determined to hide anything implicating them in the deaths.

As an insider speaking out, he has put the cops under pressure, making the failures of their operation clear and opening the door to arguments Daily Maverick suspected for a long time: that police killed in cold blood.

Vermaak had 16 years of experience as a commander in Public Order Policing before becoming an air wing commander and he dealt with mining violence before. Before the operation on the 16th, he made two suggestions to the plan: start in the hostels first and hit the koppie (where thousands of workers gathered during the day) in the early morning before a large group gathered. The first suggestion was dismissed as police didn’t have intelligence on who to target in the hostels. Regarding the second, however, the Commission has heard it would have been better for police to confront the koppie in the early morning, but political pressure made them want to act on the 16th, even when the operation was delayed until the afternoon.

Led by evidence leader Kameshni Pillay, Vermaak said Lieutenant Colonel Joseph Merafe and Brigadier Adriaan Calitz were experienced in public policing. Otherwise? “Other people from Pretoria that I met, I believe they had never been exposed to the experiences in the mines.” He had never seen Mpembe involved with unrest in the mines. On the Special Task Force’s Lieutenant Colonel Duncan Scott, who devised the plan for the 16th, he said, “It was strange to me that somebody from the task force was brought in to draw a plan for an incident that has public unrest.”

In 2011, after three mineworkers died during unrest in Stilfontein, Vermaak raised policing problems in an email to his superiors, North West Commissioner Zukiswa Mbombo, Mpembe and Calitz. He observed a lack of training, lack of command and control, the wrong equipment, lack of video capturing and a failure to make proper records. The leaders, all of whom featured at Marikana, didn’t provide any feedback.

Vermaak’s relationship with the top brass is clearly strained. Unlike other officers at the Commission, he’s being led by the evidence leaders instead of the police counsel. Repeatedly, he told his superiors he would tell the truth. At least two incidents appear to have put him on the sidelines. First, he raised the issue that Mpembe ordered the tear gas on the 13th. Secondly, he told his superiors how an officer said a colleague shot dead an injured miner because “he doesn’t deserve to live”.

During the Commission, Brigadier Calitz, who was in charge of police on the ground on 16 August, called him and said they should get their stories straight. “Basically, from the beginning I said I would just speak the truth and if there were mistakes made I would admit to them. He said that blame would be apportioned to me on that day. That is why I deemed it necessary to keep this note in my diary. I said that I confirm that I will remain with the truth and nothing more than that. In consultation with the legal team – and I thought they represented me as well – at that stage it was mentioned to me that I am going to carry the responsibility for those who were killed at koppie 3,” Vermaak told the Commission, referring to the killings at the “small koppie”, which weren’t caught on camera. He says they wanted to blame him because he was the most experienced Public Order Policing officer in Marikana.

The rot of apparent collusion and fabrication goes deeper. Vermaak was summoned to National Commissioner Riah Phiyega’s office in early 2013. The country’s top cop had heard a rumour, from who she wouldn’t say, that Vermaak had bragged to a colleague around the braai about shooting miners from the helicopter. She’d also heard he was consorting with George Bizos, representing the Legal Resources Centre at the Commission, and evidence leaders. Vermaak denied the allegations, saying he hasn’t worked with Bizos and only met evidence leaders this year. He said he doesn’t normally carry a gun and didn’t at Marikana, nor does he stand around braais after having smelt people being necklaced.

The police have declined to talk to media about the issue, saying the Marikana Commission will deal with the issues.

Teboho Mosikili, a SERI advocate for Marikana’s deceased mineworkers, said, “It is worrying if SAPS is shaping the case and distorting facts to suit their case. If what Vermaak is saying is the truth it also proves that the police were not attacked and people were executed at scene 2 [the small koppie].” He added, “In the truth that he tells he should implicate himself also. He must not act as if he was not there and wash his hands blaming the others. He is not an angel in all of this.”

Speaking on Vermaak’s testimony, Marikana mineworker Sobopha Mthethwa told Daily Maverick, “We as the workers are happy that there is a policeman willing to tell the truth which proves our version of events to be true. We are also happy he is telling and showing how corrupt the SAPS top brass are and the role they are playing in prolonging and wasting the commission’s time. If they all tell the truth a lot of time would be saved.”

The truth has hardly been forthcoming at the Marikana Commission. The police say they had a decent plan and used live ammunition to kill workers when the strikers, high on muti, charged at them, risking lives. Yet no one will admit to being in control while the shootings took place. We’ve seen the cops have doctored evidence, adding weapons to crime scene photos, and hidden relevant information, failing to submit some photos and videos. Some miners were shot from behind. The provincial commissioner, under political pressure, even said “it is blood” if the miners don’t surrender, perhaps a slip of the tongue if we forget that mortuary vans and rounds of live ammo ordered before the killings.

If the truth’s been hard to find, justice is non-existent. Over a year and a half since the massacre, no one (but the miners themselves) has been charged for the killings, nor the reports of torture that followed. Families who lost breadwinners have been put through hell. They’ve got few answers for what happened and no justice. It’s hoped Vermaak’s appearance might change that.

But what’s happening at the Marikana Commission goes beyond those directly involved. On Wednesday, Bizos compared the killings to what happened in Sharpeville in 1960. The comparisons are easy to make, but more prevalent are the instances of police brutality and ineffectiveness experienced across the country that have continued almost as though democracy never occurred.

The Marikana Massacre ties into the other week’s big story, the Nkandla report, on the issue of accountability. Despite alarming levels of police violence, no one is called to account, little concern is raised even when 34 mineworkers are killed. A police commissioner, appointed by the president, is now implicated in trying to suppress evidence and intimidate a witness to a state inquiry. Future deputy president Cyril Ramaphosa is tied to a crackdown which led to mass deaths. Neither will be held to account and no one’s asking who the hell has failed to train our police so that they stop shooting protesters and dragging people behind cars.

Vermaak will face cross-examination in the coming days, before the long-awaited witness, “Mr X”, a mineworker set to testify for the police, appears. The lieutenant colonel’s claims must still be tested, but so far he’s shown there are still people willing to stand up for truth and accountability, even if they are few and far between. DM