Op-Ed: A giant stumbling through the minefield of political division – my appeal to the Cosatu workers 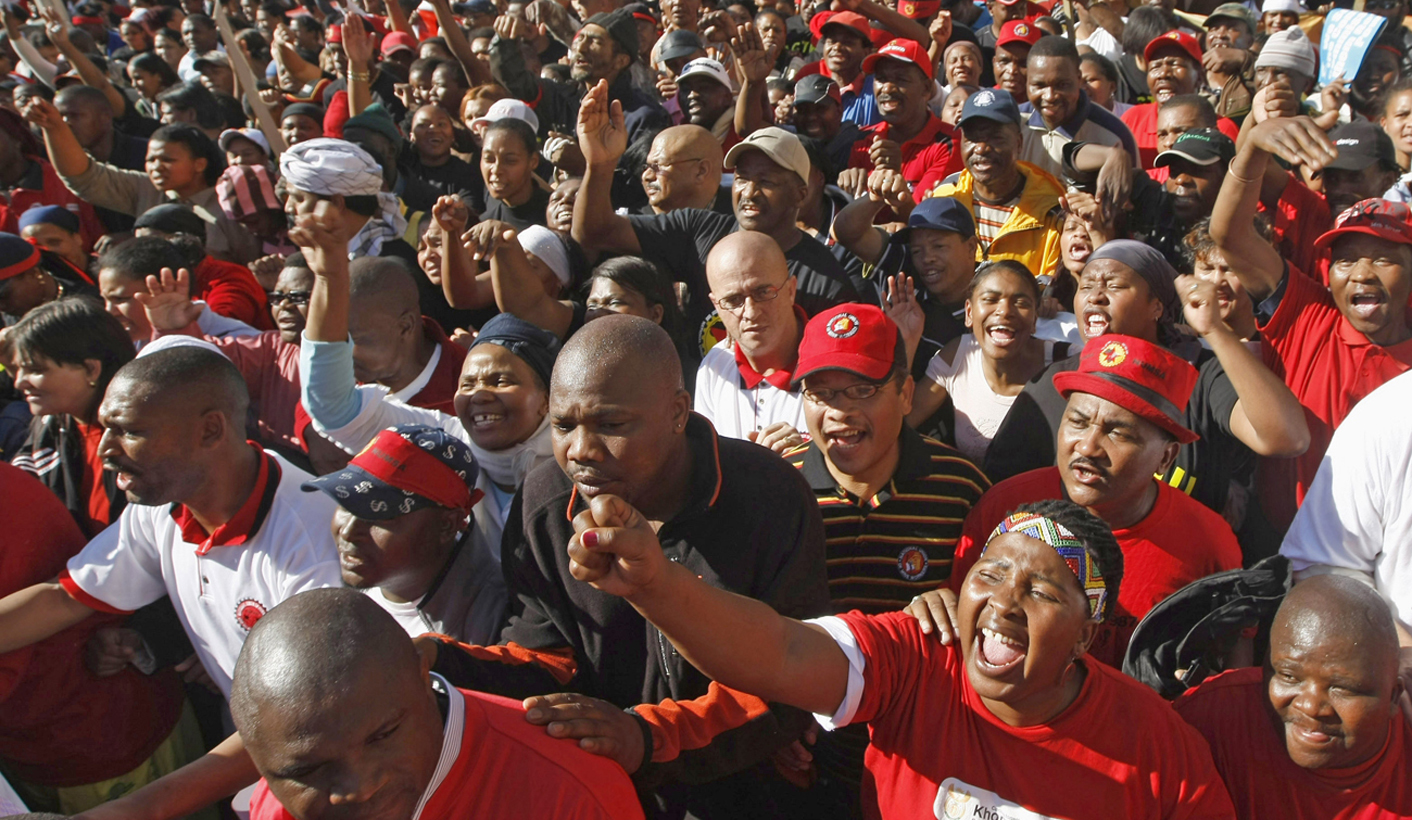 The central task of Cosatu was always building trade union unity. I am surprised that more has not been done to re-inforce that unity in a post-Apartheid SA. And I am shocked to see that proud body, the leader of South Africa's organised working class and largest in our history, fall to its knees with the sword of disunity piercing its heart. I cry along with millions in our country. I cry at the betrayal of the heroic cause we so painstakingly crafted in the furnace of the battle for our rights on the factory floor, three decades ago. By JAY NAIDOO.

In 1986, 27 years ago, we survived a stadium of 60,000 screaming impis, attending the launch of our rival UWUSA, baying for our blood and marching around the sports field of Kings Park stadium carrying a coffin emblazoned with the words “Barayi/Naidoo. Cosatu is dead.” We survived that; we survived the bombing of Cosatu House and many of our offices around the country. We survived the arrests and assassination of many of our officials. We grew stronger because we had a united leadership that was answerable to a mobilised and highly energised membership.

The fiery speeches of Elijah Barayi at our launch in 1985, giving PW Botha six months to abolish the pass laws and calling for the release of Nelson Mandela, railing against the exploitation of black workers are today but a faded memory. Now, like ghosts, the focused militancy of the past hangs lifeless, in glazed picture frames in Cosatu boardrooms.

The same diseases which prompted the formation of COSATU remain to this day. The migrant labour remains as deeply entrenched as ever, as subcontracted labour and casualisation continue to marginalise the workers’ families. Inequality and inequity are still with us, even larger than before. The number of dependents supported by a single breadwinner has grown; the micro-loan sharks are lurking around our factories and mines, driving up wage pressures.

Official statistics say that half of our children from the working poor leave after 12 years of school with very few skills, no hope of jobs and are unlikely to experience the dignity of labour in their lifetime. Formal employment is shrinking, swelling the unskilled labour pool, driving the rapid slum urbanisation and igniting the anger we see in wage bargaining and the wildly growing protests in our townships.

In the absence of strong shop floor organisation and a Cosatu leadership, distracted by its political ambition, workers lose confidence in their leaders and form new unions. They are often led by those who are untested and inexperienced in negotiations but can wildly promise clearly unachievable results. And for the first time in the history of Cosatu, workers have no-one to turn to in the Cosatu leadership for intervention and solidarity.

The Marikana massacre marked a watershed in our democracy. It demonstrated the loss of trust in the Cosatu and affiliate leadership. While violence from any side is inexcusable, deadly force from a democratic state is a cardinal sin. It strikes at the heart of democracy. Then violence and counter-violence becomes a norm, the only language communities believe will get their leaders to listen. If we do not act decisively on the grievances that drive this hostility, we will be embedding the hallmarks of a failing state.

The lifeblood of Cosatu has always been “workers’ control,” a principle of internal democracy based on seeking mandates and report backs from the rank and file. Workers built the federation factory by factory. The Cosatu Executive structures were an extension of the local councils and affiliate branches on the shop floor. In every single crisis, from the bombing of Cosatu House and Apartheid repression to the Labour Relations restrictions and the building of the 1989 Defiance Campaign, Cosatu always went back to its members to seek a fresh mandate. It was our firm belief that our power was not in offices, but in the powerful, democratic worker organisation, in thousands of workplaces.

Today Cosatu’s crisis is reflected in the huge disconnect between leadership and the membership. The socio-economic disparity between the two has become a gulf. In the last Cosatu Congress, Zwelinzima Vavi, the suspended General Secretary, honestly reported, “Living in the suburbs of northern Johannesburg, I have access to luxuries that many in our constituency do not. Workers feel that the unions and the leaders fail them by not prioritising their bread-and-butter issues, due to their pre-occupation with politics, and seek solutions elsewhere.” That frank self-criticism was a trademark of Cosatu in the early days. It’s all but disappeared under a cloud of the current pre-election denialism.

I was part of the leadership that led Cosatu into an alliance with the ANC and SACP. It had a clear objective. We were making a commitment to a profound transformation of the cheap labour system and its attendant diseases of joblessness, poverty, gender violence and inequality that struck at the heart of Apartheid. In all my discussions with comrades such as OR Tambo, John Nkadimeng, Chris Hani, Nelson Mandela and Joe Slovo, there was an explicit commitment to the political independence of Cosatu. They worked tirelessly in building the unity of the labour movement.

I see little evidence of that political leadership today.

I have no role in your leadership structures today. All I can say is that you, Cosatu members, have a proud history. You stood firm when our government, in its insane policies, denied people living with HIV and Aids. You mobilised and spoke out strongly against the human rights abuses of Zimbabwean and Swaziland workers.

Where is that powerful voice today?

There is growing ferment in our land. The people in our townships, rural areas and squatter camps are bitter that democracy has not delivered the fruits that they see a tiny elite enjoying. There was a time when the Cosatu shop steward was a community leader and an education activist.

But where has the social activism gone to in our country? Has it been sucked into the system? I cannot answer those questions. Only the workers on the factory floor, in the shafts underground and across the length and breadth of our beautiful country can answer that.

I think the call for a Special National Congress is an important one to resolve the current impasse. I hope you will answer that call. History judges harshly those whose only claim to legitimacy is to rest on the laurels of past glory. DM

Jay Naidoo was the founding General Secretary of Cosatu.