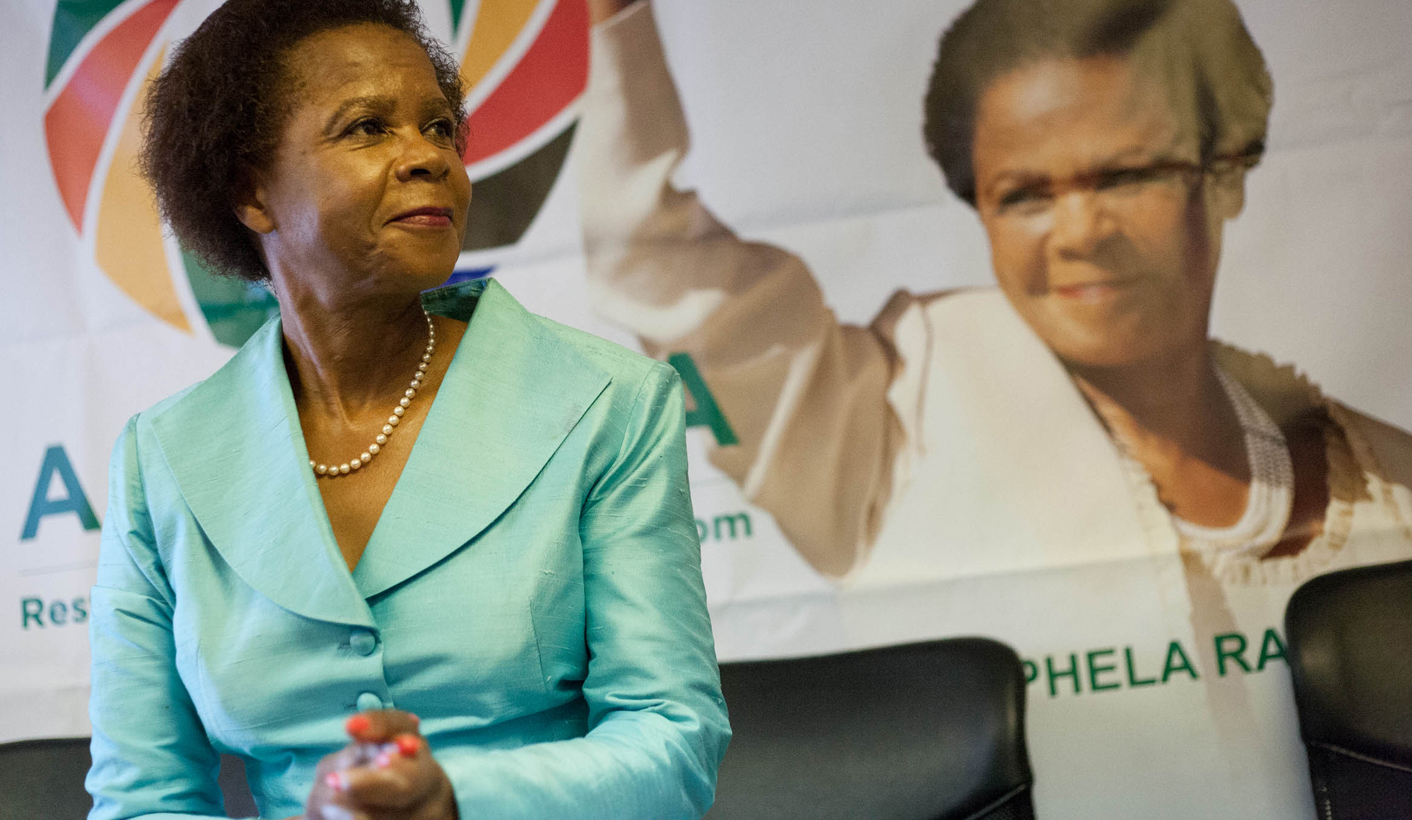 The Agang leader has botched a marriage with the Democratic Alliance and is working on the fringes. Once the Great Hope, she is now an afterthought. What happened? RICHARD POPLAK eats and listens.

One is always ambivalent about telling one’s story. Critics charge that one is being self-seeking or ask whether one is as true to one’s demons as to one’s angels. The issue of selective memory rears its head: it is so easy to rewrite history for one’s own benefit.

Dr. Mamphela Ramphele, Across Boundaries: The Journey of a South African Woman Leader

If you want to understand Dr. Mamphela Aletta Ramphele and the disasters she has failed to navigate over the past few months, it helps to examine a picture of her grandfather, a farmer and Dutch Reformed Church evangelist named Sethiba Michael Machlaela. It helps to read her snipped, grammatically exquisite prose. And it helps to marvel at the accomplishments studding her official biography, which are so astounding they’d seem fictitious were there no hard evidence to back up the claims.

But this is the story of two separate and conflicting selves, so before we drill down into the specifics, we must consider the reception atrium of the Protea Hotel Balalaika Sandton. Overstuffed with colonial era tchotchkes, attended by doormen wearing pith helmets and livery, it’s one of the many hotels in this country that offer, and I quote, “the timelessness and calm of a bygone era”. Colonially themed hotels, I’m convinced, are the finest evocation of the South Africa Mamphela Ramphele has helped set free: one big opportunity to cash in on the past, whether it’s shilling olde timey British pomp to Americans in chinos, or struggle credentials to voters at the polling booth.

Speaking of the latter, today the Balalaika is the venue for a Business Engage breakfast, starring the leader of the Agang Party, and the woman who was once the great non-white hope of South Africa’s enlightened liberal class. The breakfast and speech were to take place in the Oxford Room, chosen as either a nod to the speaker’s considerable academic achievements, or because it was available, or both.

Colleen Larson, Business Engage’s CEO, would later explain that her outfit empowers women’s entrepreneurship, although “Men, don’t worry, when you see it’s a women’s organisation, don’t think you can’t join. It’s all about diversity.” The crowd is indeed a variegated bunch, with one table occupied by students from Crawford College, and the rest by the usual smattering of business folk. At the head table sits Dr. Mamphela, strangely immobile, as if she is being saved for a war in the distant future. She wears a maroon business suit, a string of pearls, her nails painted hot pink by the finest nail technologist in this land.

I’m introduced to the doctor by a thickset man in a black suit who is today functioning as her minder and fund-raising guru. Garth Towell, one-time Managing Director of Kimberly-Clark Sub-Saharan Africa, tells me that the company was ready to pack him off to Australia, but he didn’t want to go. “I wanted to stay here and make a difference,” he tells me.

Like so many powerful, white high achievers, he saw in Mamphela a fellow believer, a woman—a black woman who bore Steve Biko’s child!—who understood that business principles could overcome the foibles of lousy governance. Run a country like Apple instead of a personal bank machine, lead like Warren Buffet rather than a character from The Wire, and bingo: Denmark. If the Agang faithful are faithful to anything, it’s a 3.0 beta version of the Calvinist rectitude that made the volk inviolable and this country the 1980s leader in coal-to-fuel production: buildeth a laager, worketh like donkey, taketh no handouts.

“Julius [Malema],” says Towell, “he’s hit the right pressure points. But his approach is highly questionable. It’s unrealistic. It’s possible that he’s shot himself in the foot, because poor people aren’t stupid, and they know his policies are unworkable. Everyone else—their policies are premised on the fact that the state will provide. We say ‘No! We will enable. You take control of your own destiny.’”

Destiny, it turns out, is one of Mamphela Ramphele’s favourite words. Destiny, at least in her conception, is to grow up black and female in Anydorp, Apartheidstan, and at 49 years of age end up writing a memoir entitled Across Boundaries: The Journey of a South African Woman Leader, in which you detail your time as an student leader, doctor, black consciousness luminary, anthropology professor, mother of two boys, vice-chancellor of the University of Cape Town—without yet having become a managing director of the World Bank or starting your own political party. For almost thirty years, Mamphela has been peddling this biography as Just-Do-It! bromide, without properly explaining what it took to create it, and what parts of the self had to be thrown in the fire along the way. Each point on that biographical continuum is a world of pain, and surely exacted a huge cost. It is the biography of five people.

Where are the other four?

“Today,” says Dr. Ramphele, after walking to the lectern, “we are talking about this simple woman who migrated from the northern parts of this country to the southern tip. So much is holding us back from daring to dream of building a winning South Africa. What’s got me out of my slippers into my shoes is to ask: do we even know how lucky we are?”

She recites her story: the school teacher parents who demanded excellence; the two Afrikaner teachers with National Party lapel pins who helped nudge her into medicine; her belief in the fact that she could be whoever she wanted to be. Part of what has helped sweep Ramphele into politics well before she was ready is exactly this species of Positivity Inc. When the woman speaks, you want to get off your ass and help her help you help yourself.

Agang is, after all, a political sculpture carved from Ramphele’s granite sensibility, gussied up with Eat, Pray, Love shibboleths: “It’s all about self-belief,” she tells us, wiping away a sheen of sweat with a serviette. “I’m going back to where I came from 45 years ago—to consciousness. If the spirit dies, it’s very hard for someone to assist you. And nothing kills the spirit like handouts. RDP housing—always waiting. Social grants—always waiting. We’re not in charge! And God made us to be in charge.”

Mamphela, despite constant mentions of the Man Upstairs, is big on people being in charge of their own destiny. “I get very concerned by white friends of mine, who say, ‘You can speak. But I can’t.’ I say, ‘Why disempower yourself?’ And then, ‘We need to take away this dependency on government, not just as individuals, but you in business—tender this, tender that!’” There audience laughs; these are not tender types.

In all of this, a not-so-savvy political observer can tell that the marriage with the DA was—where’s my Thesaurus?—destined to fail. The DA is in the handout business. Mamphela Ramphele is in the DIY business.

Following her time at the lectern, I sit with the doctor in two high-backed colonial chairs outside the conference room. She is clipped and efficient and in a rush. Naturally, I ask her about the botched marriage with the DA.

She then tells me of her admiration for Whitey Basson, CEO of Shoprite Holdings, who has Checkers, Shoprite, and several billion other brands. “It’s the same thing in politics”—she is leaning in now, emphatic—“you need different venues to attract different people. If you don’t understand the basic facts of politics, then…”

These are not, of course, the basic facts of politics. One hopes that Whitey Basson is smart enough to understand that he’d last less than a round against Helen Zille, about seven seconds against Jacob Zuma, and have his clock cleaned by Julius before he stepped in the ring. Politics is Politics. And sitting across from the doctor, I come to understand that Agang is more than just a vanity project. It’s an attempt to return to Limpopo in the 1950s, and make that little girl less of an exception. It’s an attempt to make the exceptional normal. It’s a reminder that all politics are personal.

But Mamphela Ramphele? Her biography is meant to inspire others to excel, and it does. Yet sitting across from her, you realise that although the biography is factual, it’s bunk. There is only one Mamphela Ramphele. And the self who lived the biography is in the process of destroying the self who sells the biography. Agang can never be anything more than a tiny fringe party, offering a small minority a South Africa in which dreams come true, where social policy is subordinated to individual will. The state as enabler. The state as Dutch Reformed Church with a smile. Ayn Rand’s objectivism without any need for a strong male.

Ramphele, for all the talk of compromise and coordination, can do neither. Her party may be an ode to her biography, but that’s not the same thing as saying that it’s built to satisfy her ego. There was nowhere else for her to go in the universe; she was pushed here by her CV; she was banished to Olympus by her supporters. Agang is how she sees the world. It’s an essay she wrote, except that the words were made out of people.

“We can dream much bigger than we’ve allowed ourselves to dream,” she tells me. “It’s about the inner person that has to be empowered.” She looks shaved to the bone, raw; the only thing keeping her from dissipating into dust is her make up. She attempts a smile, but it doesn’t quite work.

“I must go,” she says. She then disappears into the sort of colonial flimflam that is worthy of her irony, if not her scorn. DM