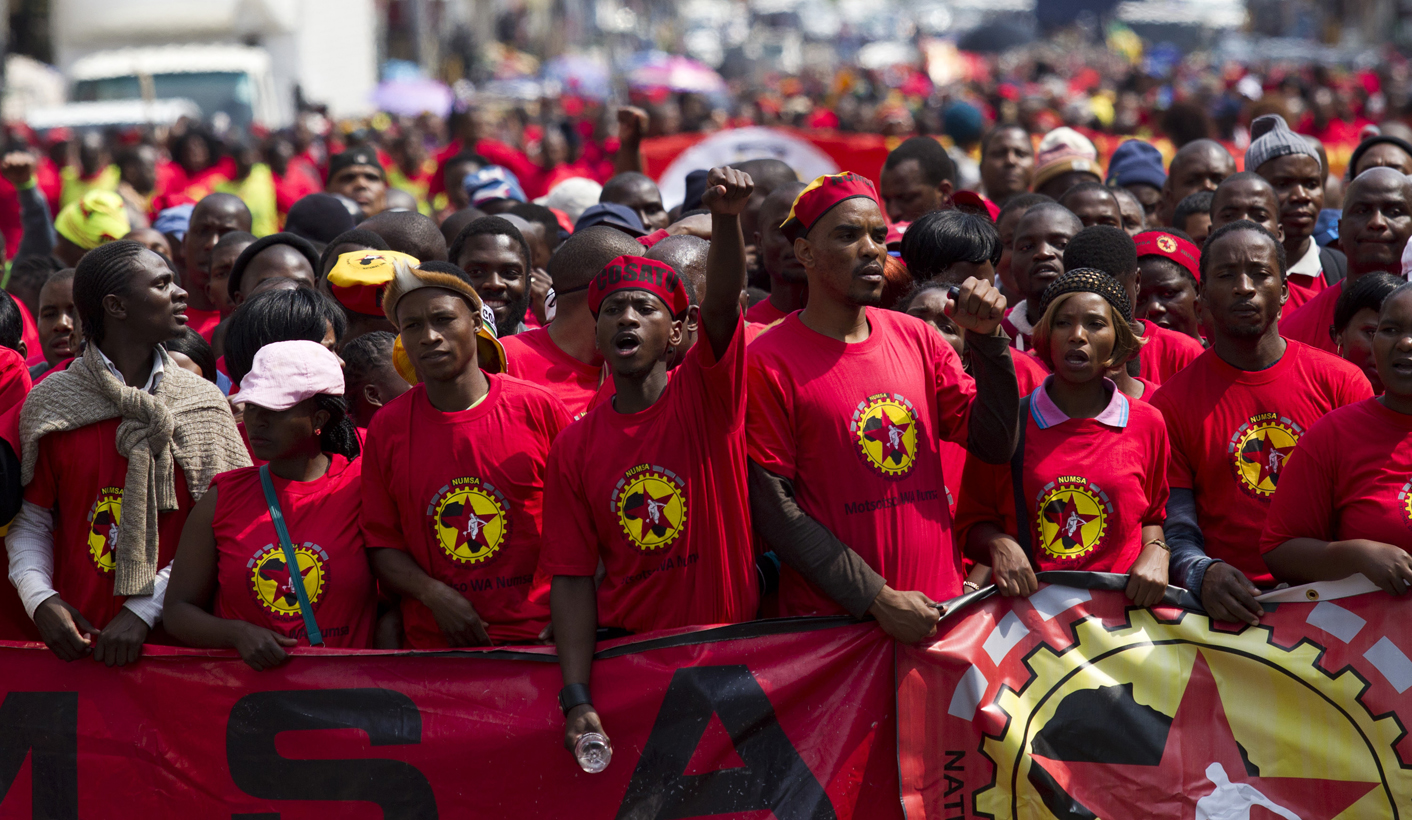 So it has finally happened. The militant metalworkers union Numsa is now actively campaigning against the ANC government and has issued a call to South Africans to join its “United Front” – a mass movement for socialism and radical economic change. Numsa will soon be hosting provincial consultative conferences to bring together left-leaning organisations and social movements, and this will culminate in a national summit. Numsa will also ratchet up the pressure on the ANC government through a national strike on 19 March. If you read through Numsa’s demands and objectives and somehow hear the echo of Julius Malema’s voice, you are not alone. By RANJENI MUNUSAMY.

In the midst of the Oscar Pistorius trial frenzy, the full weight of the announcements this weekend by the National Union of Metalworkers of South Africa (Numsa) might not be felt. Numsa had decided at a Special National Congress in December to withdraw its support for the ANC and also explore the establishment of a movement for socialism. As dramatic as those resolutions were, it was difficult to believe that with the stakes so high for the ANC in an election year, these would actually be acted upon.

Numsa called a media conference on Sunday to respond to the ANC manifesto, President Jacob Zuma’s State of the Nation Address (Sona) and Finance Minister Pravin Gordhan’s Budget speech. For an organisation that was still part of the fold a year ago, Numsa’s assessment of these was not kind.

“There is nothing in the State of the Nation Address that even remotely indicates that the ANC and its government are embarked upon a ‘radical transition’ for full social justice in South Africa. Nor does anything in the Sona remotely signal the fact that the ANC is worried that virtually all Black and African communities, 20 years into democracy, are at war inside themselves.”

The Budget, Numsa said, confirmed “the rightwing shift in the ANC/SACP government”:

“The sweet-coated promises contained in this Budget, including the pathetic increases on the social grants, do not succeed to hide the fact that this is a budget designed to please South African white capital and its local agents and imperialism and their rating agents.”

While Numsa made the case in its 15-page media statement as to why it cannot support the ANC any longer and stated that the Alliance “no longer serves any revolutionary purpose”, they cannot say who their members and supporters should vote for in the May elections. Numsa general secretary Irvin Jim says they do not believe any of the “bourgeoisie political parties are going to deliver anything”. He said the ANC had squandered its political power and the Democratic Alliance was a right-wing political party.

Numsa, Jim said, was going to form “catalysts to raise the consciousness of the working class”. While there was a need for a movement for socialism, there was no rush to set it up. “We think time has come now to organise ourselves as a class… The social movement will contest elections when the time comes,” Jim said.

Numsa is already referring to its movement in capital letters, as if it is the official name, and says work is well underway to mobilise the working class into the “United Front” for the radical implementation of the Freedom Charter and against neoliberalism. In January, Numsa apparently met with the leaders of some social movements and community structures to begin discussions of how they will work together.

Numsa deputy general secretary Karl Cloete says Numsa will convene nine provincial consultative meetings to bring together “left and progressive formations” and these will culminate in a national summit. He said there was a “long list” of organisations and social movements that Numsa intended working with.

The question, however, was whether there was any relationship or envisaged co-operation between Numsa and Julius Malema’s Economic Freedom Fighters (EFF). As things stand, the ideological standing and focus on the Freedom Charter makes Numsa and the EFF’s political outlook almost identical. Co-operation between the EFF, with its growing popularity, and Numsa, with its large membership base and substantial organisational and resource capacity, would redefine South Africa’s political landscape. But Numsa’s leaders insist they do not have any relationship with the EFF and have not met with them.

Jim says the EFF has written to Numsa requesting a meeting, but they have not yet responded. While Numsa appears to be treading cautiously not to be swept up by the EFF’s red tide, Jim says they will not be “blackmailed” about whom they should meet.

Cloete said Numsa would this week be sending out a letter of protocol to all potential partners so that the consultations are not abused by “opportunistic individuals”. Some of these organisations have already committed to joining Numsa in a national strike later this month.

“Numsa shall on the 19th of March 2014 embark on a national strike to demand the scrapping of the employment tax incentive act or the so called youth wage subsidy. We shall do so in defense of existing jobs as we have reason to believe that the current spate of retrenchments notices across various sectors are directly linked to this stupid incentive scheme,” the union statement read.

The timing of the strike in the midst of the election campaign will mean that Numsa will take its fight with the ANC to the streets to show that it is capable of hitting the ruling party where it really hurts.

Meanwhile, the rupture within Cosatu continues with Numsa being asked to motivate in writing why it should suspended or expelled from the federation. Jim said Numsa would respond to Cosatu but wanted details of who had asked for this and why they thought the metalworkers union should be suspended or expelled.

Jim said Numsa had become the “enemy within” among the Cosatu leadership clique that is imbedded in the ANC and SACP, which is “numerically strong” in the Cosatu central executive committee. “This pro-rightwing ANC and SACP clique in Cosatu wants to engineer the expulsion of Numsa from Cosatu. It has already engineered first the paralysis, and later the suspension of the general secretary of Cosatu Zwelinzima Vavi”.

Jim said this rightwing clique was “very scared” of the special national congress demanded by nine Cosatu affiliate unions because the meeting might trigger leadership removals. “We call on all members of affiliates of Cosatu to stand up and defend their federation from the vultures who want to turn it into a toy telephone of the ANC and the SACP,” Jim said.

From the Numsa statement, it is clear the union is moving in on the territory of the National Union of Mineworkers. “As Numsa, we fully support the just demands for a living wage for the mineworkers. We remain convinced, however, that with the increasing marriage between the ANC and its government and the mine bosses and shareholders, no just wage will be secured by mineworkers”.

Asked to explain why Numsa had made particular mention of the mineworkers, Jim said the union was concerned about the ongoing strike in the platinum belt and the lack of response from government to resolve the dispute. Jim said Numsa had “opened our scope” and was free to recruit where it wanted. “We are not taking the fight to anyone. We are building a union and recruiting members regardless of sector where they belong,” Jim said.

The line in the sand is now distinct. Numsa wants out of the Alliance and is now working on moving the centre of gravity elsewhere. If it is able to assemble a leftist socialist movement, this has the potential to build momentum and become a significant pressure group on government. If it mutates into a political organisation, and particularly if it finds common ground with the EFF, this could pose the biggest threat to the ANC in post democratic South Africa.

Malema clearly sees opening, which is why he wants a meeting with Numsa. Jim sees it too but wants a ground up movement to drive the realignment. If anybody in the ANC is paying attention, they will realise it is time to get worried. DM