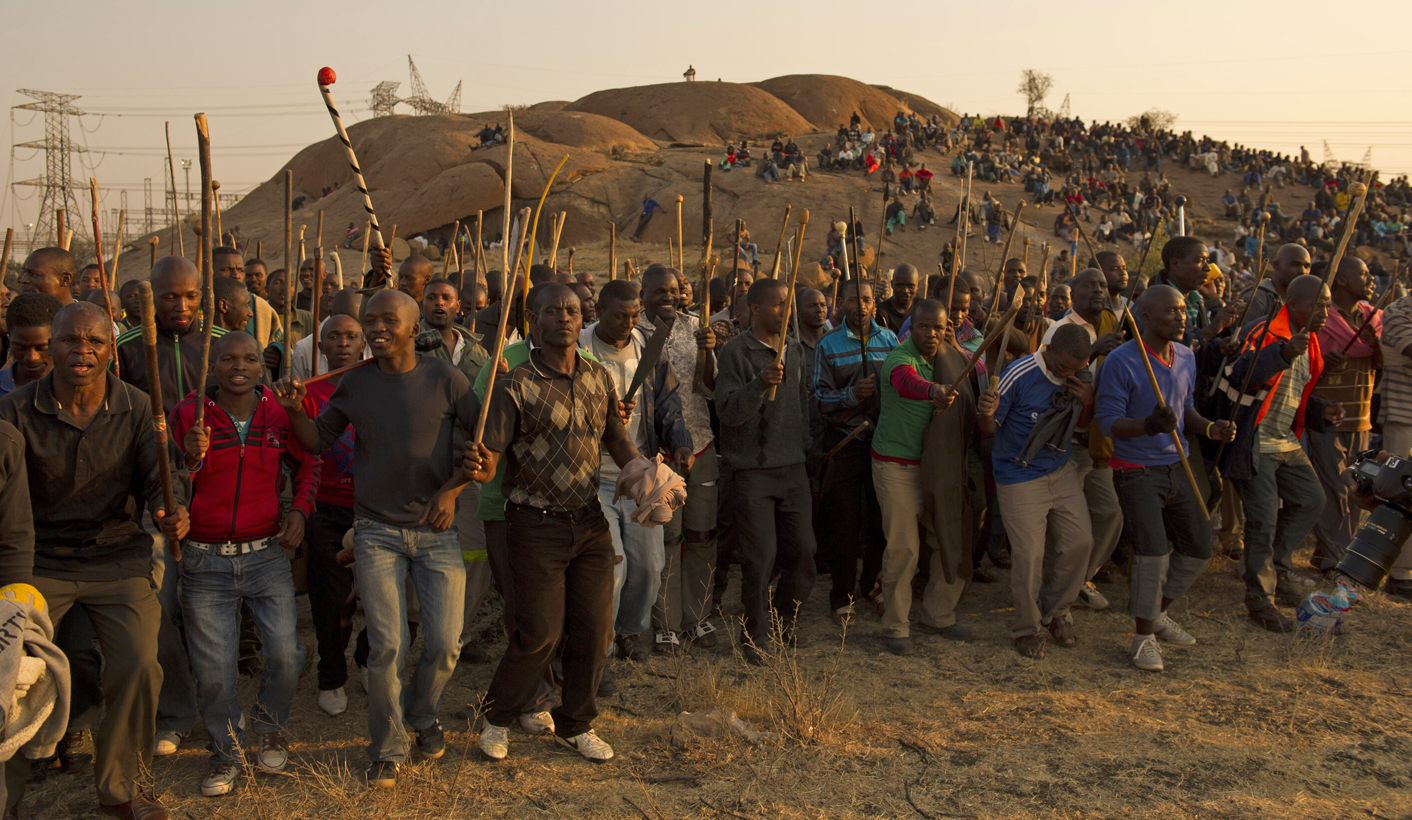 As the purported end of the Marikana Commission and the 2014 elections head for a flashy collision, it is clear that there is no chance that the commission will complete its work by April. Expect that it be extended, again. Despite this, the inquiry is making some startling revelations. GREG MARINOVICH looks at trends at the Marikana Commission.

Public interest, and media interest, in the Commission led by Judge Ian Farlam has dwindled to media picking up stuff from SAPA and the SABC’s compulsory YouTube feed. Perhaps eNCA has done a few days at the Commission, but that’s about it. All this is pretty sad, as the last couple of weeks have been critically important – and fascinating.

It is not just that retired Judge Farlam has nonetheless been at the top of his game both on serious matters of keeping all those thousands of hours of testimony readily available for intervention and key questions. He has also ensured the lawyers are kept amused with his witticisms. Farlam appears to keep winning the game of who has the quirkiest metaphors. One has to wonder what exchanges take place in the legendary tearoom.

On the subject of serious matters, a remarkable admission was made during cross-examination by Advocate Michelle le Roux for the Human Rights Commission of the overall commander at Marikana – General Mirriam Zukiswa Mbombo. The general admitted that she had not known that there was no written plan for the deadly Stage 3 which saw 34 miners shot dead by police, until she discovered this at the Commission.

Despite this omission she had sought, and gained, the approval of the police top brass to go ahead with disarming, dispersing and arresting the striking miners at least 48 hours before that fateful Thursday, in August of 2012. Mbombo said “…I thought there was a plan, but as Colonel Scott testified and indicated that there was no plan, I do not know how that happened. It also shocks me.”

Instead, the operational planner, Lt Col Duncan Scott, used a Google Maps image of the area and told the rest of the police commanders how events would transpire. Mbombo believed that there was a written plan, with exact instructions that underlay the maps. There was not.

During the cross-examination, Mbombo, police provincial commissioner for the North West province, had to agree that she had, in fact, given the go-ahead for a plan that did not exist. This is despite standing police order 262 that requires a written operational plan.

The meeting on 16 August, at 1:30pm, just two-and-a-half hours before the police moved in on the strikers at the granite Koppie at Marikana, was the first time that any concept of how Stage 3 would happen was put to the policemen. It was nothing more than an oral presentation with a few maps as visual aids.

Neither, then, did the operational commander, and deputy provincial commissioner General Mpembe know there was no written plan. Not one of these very senior and experienced police officers raised an objection.

Despite the lack of a written plan, or indeed, of a coherently presented plan for the last option of the police – that of Stage 3, which is sometimes represented as the Tactical Phase – there had been instructions since the Tuesday for a Stage 3 to be implemented, should the preceding stages fail.

Crime intelligence reports from informants among the strikers were crystal-clear that the miners would resist being disarmed. Even the operational commander himself, Gen. Mpembe, recognised that the police would be unable to disarm the full group of strikers on the Koppie; that it should be done in the morning when there were no more than the 1,000 who had taken to sleeping on the Koppie. Mpembe said there would be blood.

Yet what were the reasons for Stage 3 taking place? Mbombo cited escalation as a possible reason.

The last killing was Tuesday, when the strike committee determined that Isaiah Twala was a spy; he was murdered. By the time Stage 3 was implemented, there had not been a death for 48 hours.

The previous phase of containment was, in fact, working, pointed out Le Roux. There was no need to go to Stage 3 because there had not been violence for two days. Le Roux put it that the reason for the police action that led to so many casualties was not to stop illegal activity, but to break the strike, because of political pressure.

Once the operation began, at 15h40 on Thursday, Gen. Mbombo took leave of the command centre, and went to sit under a tree outside. All she could hear was the jabber of several police officers and radios from inside, combining into unintelligible babble.

As she sat in the shade, perhaps wandering into the control room on an occasion – she cannot recall – she was entirely unaware that after just ten minutes, the operation had degenerated into a bloodbath. It was only at 16h40, she says, that one of her operational commanders came out with the news that there had been casualties.

The Commission showed various telephone records that the control room of the operation knew, from as early as 16h02, that there were casualties caused by police shootings.

In a previous exchange with Mbombo, evidence leader Geoff Budlender said, “I have to put it to you, Lieutenant-General, that that strains one’s belief, that the police are so negligent that they don’t tell the Provincial Commissioner who is in attendance for that purpose, for the purpose of finding out what’s going on, that 18 bodies are down. I find that impossible to believe.”

The Commission also heard that Brigadier Calitz, who was parked in a Nyala between 100 and 400 meters from Scene 2 – and claims to have not heard the gunfire – was unaware of the shootings.

The venerable advocate George Bizos put it to Mbombo that “[a]ll the senior officers, including you, managed somehow or other to be both blind and deaf to what was happening whilst the people were being killed. You were outside the JOC (Joint Operation Command). The previous witness (Calitz) was 400 metres away, locked up in a police vehicle… None of you, five or six senior officers, were anywhere near where the killings were taking place.”

Bizos pointed out that “[f]rom the early days of Apartheid, right from Sharpeville, senior officers manage to be away from the killings in order to have the defence that ‘I’m not responsible, those who shot are responsible; we as leaders are not responsible.’

“Unfortunately I have lived throughout that period and I have taken part in a number of cross-examinations of this nature and I want to assure the Commission that we will give them a list of all the commissions where the result was [that] no-one was to blame. Having told you all that, we are going to submit that you and your senior colleagues are following the example of the Apartheid leaders of the police by putting yourself in a position [to be able to say] ‘We are not to blame.’”

Weeks and months of often excruciating legal cross examination and the galling, stalling tactics of the police-men and -women finally began to come together. While the process has, at times, made paint drying seem exciting by comparison, finally the drip, drip, drip of legal logic was producing results.

There is a lot more to be dug out painstakingly, especially when one considers, according to the Centre for Applied Legal Studies (CALS), that 32% of Public Order Policemen, 42% of the Tactical Response Team, 27% of the National Intervention Unit, 50% of the Strategic Task Force and 10% of the K9 dog unit had yet to submit statements about what happened at Marikana.

Of course, the reader can be forgiven for beginning to think that there might be more to this than meets the eye, when one imagines that the police are duty-bound to help the Commission get to the truth of what happened; even if that truth might be to the detriment of the police’s reputation.

Brigadier Calitz, the man who could not hear the sounds of hundreds of gunshots within a couple of hundred metres, is number six. Mpofu would not be drawn on who the others were, but if one extrapolates that list upwards, hierarchically, then one can make an educated guess that the National Commissioner Riah Phiyega is possibly number three, and Police Minister Nathi Mthethwa sits at number two. He is to appear before the commission soon.

And Number One? Your guess is as good as anyone else’s. DM

Photo: Lonmin employees gather on a hill called Wonderkop at Marikana, August 15, 2012, a day before the massacre. Photograph Greg Marinovich