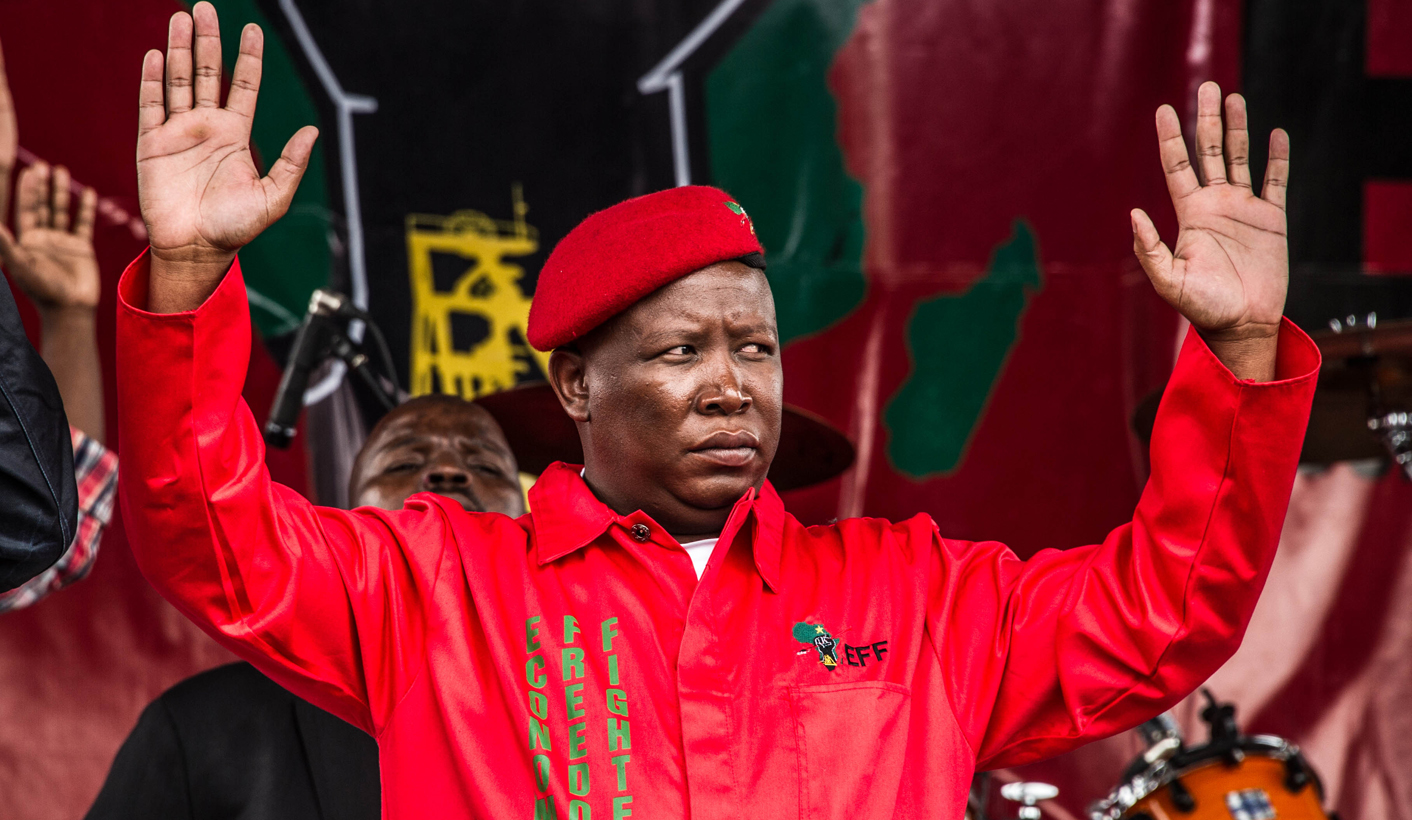 If you stood in the middle of the Mehlareng Stadium in Tembisa on Saturday and closed your eyes, you could have sworn you were at an ANC rally. There’s a certain vibe at ANC events – the energy of the crowd, the crescendo of voices in chants and song, a pulse that other competing political organisations battle to recreate. But this was enemy territory for the ANC, a red sea of rebellion, the vortex from which the desperate quest for economic freedom throbbed. Julius Malema reigned over the launch of the Economic Freedom Fighters’ manifesto like the new messiah, oozing leftist and populist rhetoric which was both terrifying and strategic genius. By RANJENI MUNUSAMY. Photos by THAPELO LEKGOWA and GREG NICOLSON.

They began arriving early on Saturday morning and by 3pm they were still there, enduring the blazing sun and occasionally a fine spray of drizzle. Some sat on the cement stands around the township stadium, most were hemmed in on the packed pitch, unable to move for hours. People passed out in the heat, children slept on the grass soaked in sweat, old people grimaced from the heat and exhaustion but kept singing and dancing along with the younger ‘fighters’.

Julius Malema’s Economic Freedom Fighters (EFF), which he conceptualised only last June, now constitutes a significant political force to be reckoned with. Over 50,000 of his supporters packed into the stadium on the East Rand on Saturday, with the only draw card being the militant philosophy for economic freedom which Malema espouses.

Most of the EFF supporters had nothing to protect them from the elements except the distinctive red berets, and nothing to eat or drink except for water distributed by marshals. Some came with homemade posters with misspelt messages and crude drawings. The scribble on one poster read:

Makeshift cardboard coffins with President Jacob Zuma’s picture and messages such as “RIP Zuma” inscribed were passed along the crowd. Ironically, similar contraptions bearing Thabo Mbeki’s image used to feature in the crowds outside court during Zuma’s rape and corruption cases. From the songs, the chants and the posters at the EFF rally, the venom was pointedly against Zuma, while Malema was the antidote.

Malema worked the crowd even before he arrived. The anticipation built for over two-and-a-half hours as people watched the gate where he was to enter. But Malema hung back until the crowd thirsted for him. Meanwhile members of the EFF central command team whipped up the crowd, marched around making arrangements and prepared for his arrival. Photographers and cameramen thronged around the entrance and lined the route Malema was to walk to the podium.

Photo: Advocate Dali Mpofu was in control of whipping up the crowd. (Thapelo Lekgowa)

And then the moment came.

Malema, surrounded by a phalanx of security personnel and aides, swung into the stadium with a wide smile, clad in a red overall and beret, his fist held high. The stadium erupted and as Malema mounted the stage, the cheers and chants reached a crescendo.

Photo: Malema enters the stadium a large contingent of media trying to get closer to him. (Greg Nicolson)

At the age of 33, Malema has gone from ANC Youth League firebrand to political pariah to an accused in a corruption trial to “Commander in Chief” of the fastest growing political organisation in democratic South Africa. When he was expelled from the ANC, his belief in the nationalisation of mines cast him as a radical in the alliance. Now he has completed a full-blown compilation of left-wing populist policies and election promises which he is trumpeting as the keystones for economic freedom.

It all looks so effortless, yet there is obvious political genius in what Malema does to keep his star rising and his party growing in strength and popularity. There’s strategy in everything – from the line-up of firebrands and celebrities that make up his central command team, the blessing of the event by popular but controversial pastor Paseka Motsoeneng, known as Prophet Mboro, to the assortment of left-wing and black consciousness parties that came to lend support to the EFF manifesto launch.

To make the point about the treachery of the ANC government, Malema had invited as his special guests the widows of the Marikana massacre, all clad in EFF t-shirts. They sang and spoke of the hardship, their heartbreak and the betrayal they feel at the ANC government killing their husbands on behalf of capital. Of course it was an exploitation of their grief but no other political party has been able to put the Marikana massacre front and centre on its election platform. Malema can and he knows nobody will dare contest the words of the grieving widows.

Photo: Zomeka Nungu speaking on behalf of the Marikana Massacre widows “our vote goes to the EFF”. (Photo by Thapelo Lekgowa.)

So everything that played out before Malema spoke was preparation for the message he would deliver. Despite the long day in the heat, the crowd hung on to his every word and drank up every bizarre, far-fetched promise. But there is also a political maturity now evident in Malema’s approach. He seems to be moving away from the image of firebrand youth leader spitting venom to styling himself along the lines of the Latin-American populist socialist leaders, championing radical, far-left policies.

He saluted the ANC legends and luminaries of yesteryear, distinguishing them from the current leadership. “Those trusted with responsibility to give us a better life have sold out. We must be our own liberators,” Malema said.

“To Chris Hani, it is correct to report to you that the struggle for socialism has been rescued. That struggle has been placed in the capable hands of fighting forces. All your ideas are alive and revived.”

The EFF’s election manifesto is a collection of fantastic, improbable targets that could never be implemented without plunging the country into utter social and economic chaos. But to an audience of people living in squalor with no hope of decent jobs anytime soon, the prospect of a doubling of social grants, ownership of land, a national minimum wage of R4,500, mining communities owning 10% of mines, and an EFF government nationalising all private banks through 60% ownership to finance its grand plans, all seem like wonderful ideas. The promise of a sizeable increase in grants is particularly ingenious as it threatens the ANC captive base of 16 million grant recipients with the prospect of more money.

Photo: Until economic freedom is achieved it will be bread and iron brew at the EFF manifesto launch. (Thapelo Lekgowa)

If there is one way to captivate an already adoring crowd, it is to make them believe that he could be taken away from them, either through death or imprisonment. Malema is on trial for corruption and is also engaged in a legal battle with the South African Revenue Service that might impede his political career.

He told the crowd that the manifesto was the product of the EFF’s collective leadership. “Even if I die, these leaders will continue to lead you to economic freedom. Even if I go to prison, they will lead you.”

Gesturing over the crowd, Malema said the rally had “unveiled many Malemas in their numbers”. “They can never kill us all, they can never arrest us all,” he said, “We are going to be attacked from all corners and intimidated. You have to be strong.”

Malema instructed that each person in the crowd should deliver at least 10 voters to the EFF. “All of you must convince 10 people to vote for this manifesto. It is your property, you must own up to it.”

A short distance away in the same township, the ANC Youth League, Malema’s former organisation was holding a youth festival. The festival was clearly a defence strategy by the ANC to also show its strength and counter the import of the EFF event. The great irony of the ANC event was that it was addressed by two of the people who shaped Malema’s political career and rise in the ruling party.

Malema’s predecessor in the ANC Youth League, Fikile Mbalula, and Young Communist League national secretary Buti Manamela were part of the line-up campaigning for the ANC and talking down the EFF’s event. But Malema has mutated far beyond what they could ever have imagined when they campaigned for him to be ANC Youth League president.

Malema is now Zuma’s competitor. He is gaining traction on the election trail and sucking up support in communities which the ANC lost and other opposition parties like the Democratic Alliance would never be able to tap into.

He is presenting a fantasy to hopeless people and they believe him. On every broken promise of the ANC, Malema is building a new illusion. It is tragedy of the South African story and political theatre never before witnessed in this country.

It is simply chilling. DM