The long walk to the exit: the perils of illegal mining

The long walk to the exit: the perils of illegal mining 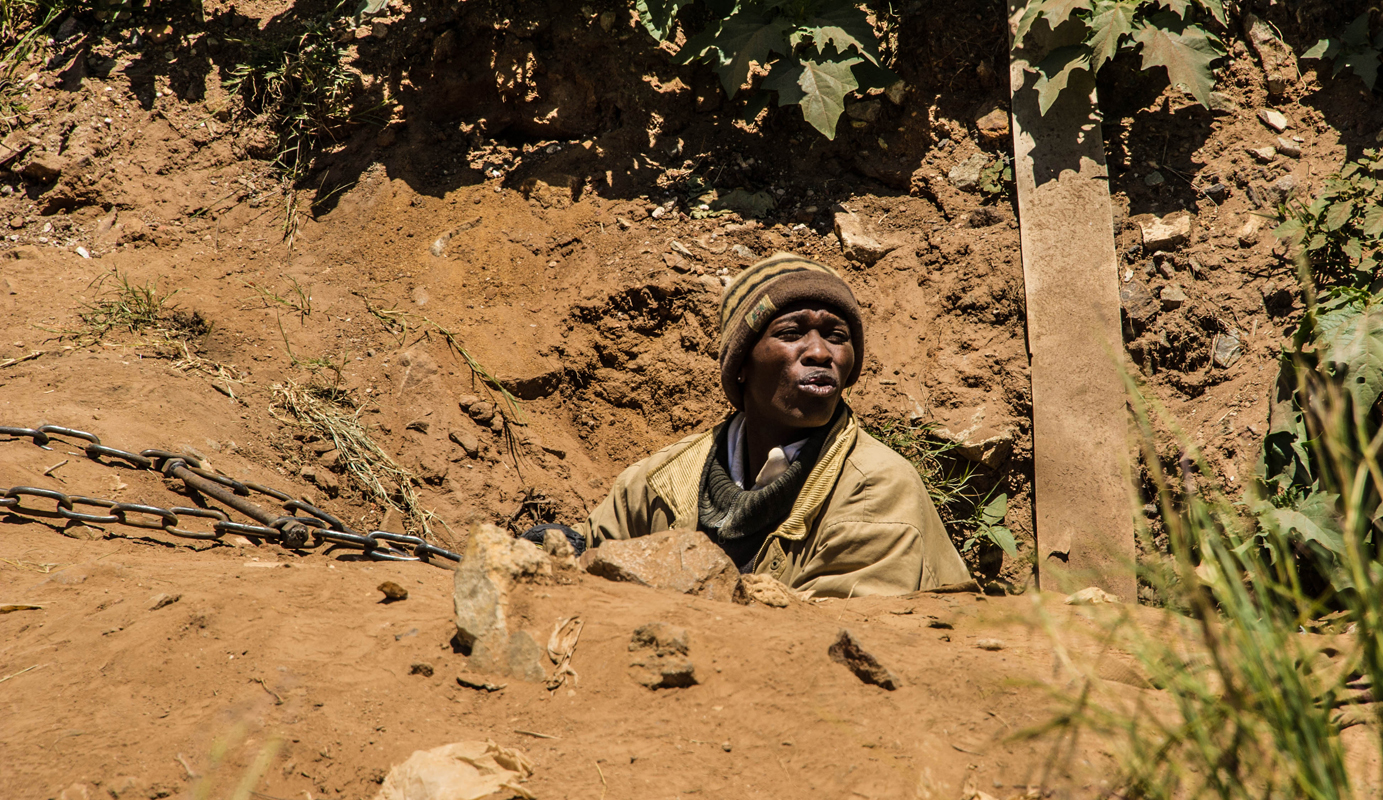 A reported 200 miners have been trapped underground since Saturday at a closed Gold One International shaft in Benoni. As police and mine security continue their standoff with the miners, the death rate from illegal mining continues to rise, with two men reported dead at a nearby mine. By THAPELO LEKGOWA & GREG NICOLSON.

From the dusty outcrop a man started making his way out of the darkness and into the glaring sun on Monday. Speaking Sotho, he convinced others to come out. They emerged from the disused mineshaft so slowly it was painful to wait and witness. Emergency services and police have been on the scene since Sunday and to get the illegal miners to the surface, there are vague promises to the miners that there will be no arrests.

The illegal mineworkers have their doubts. Their heads pop in and out of the shaft entrance, about a square metre wide. Ekurhuleni Emergency Services and the police used a man as bait on Monday. They let him walk free with all his belongings. From the shaft entrance, the miner posted as lookout called out in Sotho, “They let him go so they will not arrest us.” So far, 25 men have emerged from the unused mine and most have been arrested after a medical examination.

“Sledge!” yelled one of the emerged miners, who was standing at an ambulance to his colleague still inside the mine. “Sledge, come out! They are letting us go, but if they are to arrest us it’s also fine, but come out.” There was no response from “Sledge”.

Eleven men made it out of the shaft on Monday; only three on Tuesday. Paramedics were hoping another 10-15 would emerge. They were later taken into custody at the local Benoni Police station and charged with illegal mining. Some men covered their faces as they came out and the authorities denied media access to the men.

Nearby the Gold One shaft, at Gravelotte mine, two men were found dead on Tuesday after meeting a group of rival illegal mineworkers, reported the BBC. Other miners went in search of them after they went missing and the miners have retrieved one of the bodies after police said it’s too dangerous to enter.

The Benoni incident is the latest in an ongoing series of miners being trapped in disused or abandoned mineshafts around Johannesburg as they try to make a dangerous living. Last July, seven illegal miners were found dead in a Brakpan North shaft after clashes with other miners underground. Earlier this year, almost 40 miners were arrested for illegal mining in Florida after a resident reported seeing them with dangerous weapons.

In Benoni, the men are part of a community in Whiteville township and while most hail from Lesotho and Mozambique residents say no one has a clear idea of who they are or their backgrounds. “They are not from here [South Africa],” one woman said.

The ventilation shaft where the illegal miners operate from is part of what used to be a short cut for the residents of Whiteville to walk to the Benoni CBD and back. But residents say the miners make the area dangerous. “I was mugged for my [cold drink] by the miners and was forced to change my route,” resident Zweli November told Daily Maverick.

“These people are ruthless, hence you will have no one willing to tell you [who they are] even if they know any of them. Many of the South Africans staying around the abandoned mine have attempted to mine some gold but it is not a boys world down there, only real men,” continued November.

The men who emerged on Monday claimed that there are more than 200 miners still down the shaft who face a long walk before they get to the exit point. But the number of miners underground has not been confirmed and authorities are not certain of the miners’ claims. They say it also might be an act of desperation to stall the planned sealing of the shaft set for 3 March, 2014. Meanwhile emergency service staff lowered food and water into the mine to help the men survive.

“We will give those underground ample time to get out, but will have to close it,” said rescue technician David Tshabalala, according to SAPA. Emergency services left the area on Monday but police and mine security are still waiting for the miners to emerge.

“These activities are illegal and compromise the safety of the environment and the communities surrounding these mines. We appreciate the cooperation we have received from these illegal miners and we are convinced that information obtained will lead us to the kingpins behind these activities. We will be going after the masterminds. We cannot allow this to continue,” said Major General Shadrack Sibiya, Gauteng head of the Hawks, in a statement on Monday. The Hawks said the arrested miners are all foreign nationals, mostly undocumented, between 20 and 40 years old. DM

All photos by Thapelo Lekgowa.