The state og the nation according to Jacob Zuma: Let the good times roll 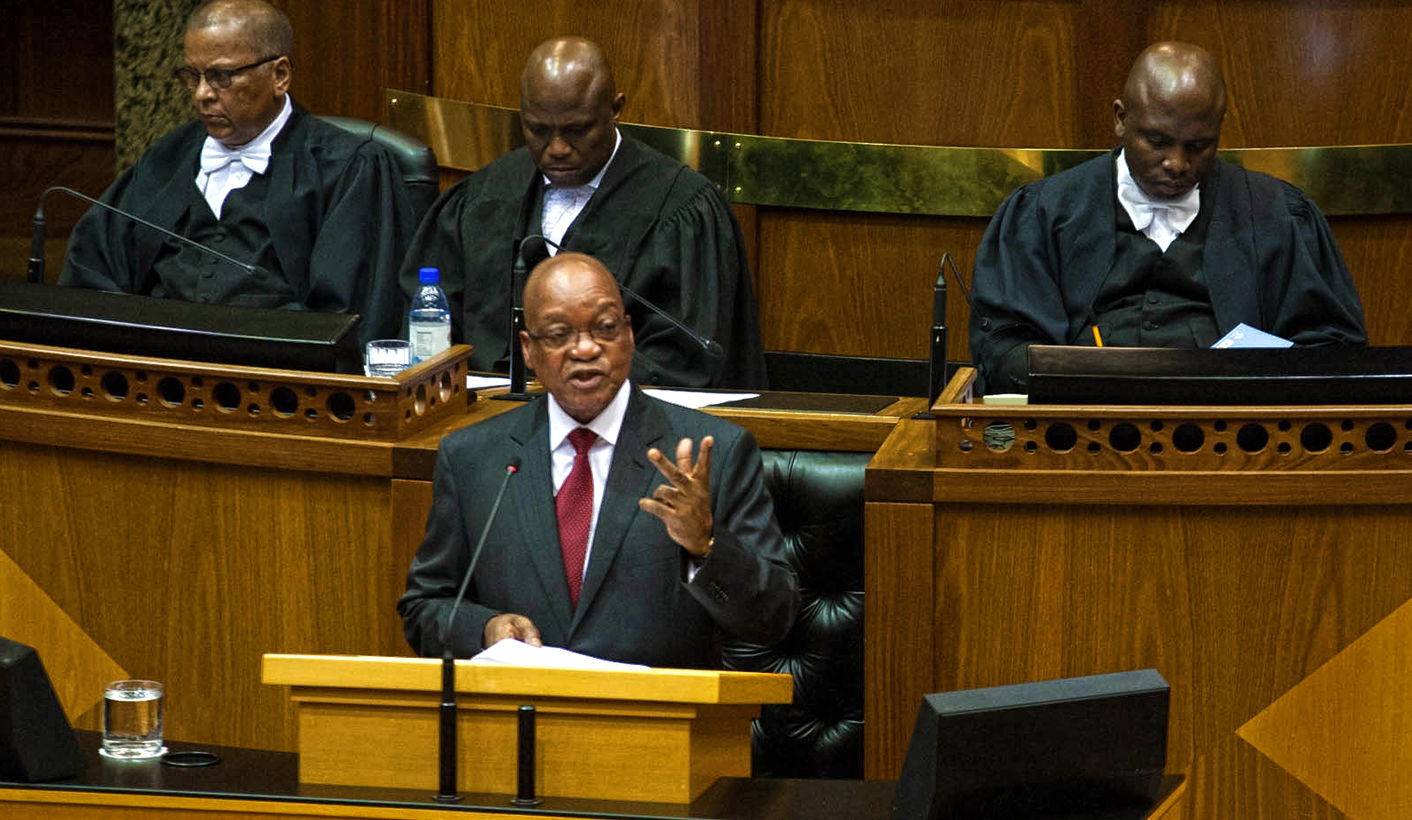 On Thursday night, President Jacob Zuma stood before Parliament to deliver the last State of the Nation address of this government. Tactfully leaving most forward planning to the “next administration” (as if there’s any doubt about who that might be), Zuma instead reeled off a highlights package of what has been achieved since the dawn of democracy, and in the past five years in particular. In short: you are better off than you used to be, and if you’re not…well, maybe your expectations are just too high. By SIMON ALLISON.

To a packed and lively Parliament in Cape Town, President Jacob Zuma delivered his fifth State of the Nations address (SONA) on Thursday night. It was his final major set-piece speech before his first term expires in May, although few doubt that he won’t be back here next year.

Zuma, looking composed and confident, dwelled on the progress made during his tenure as president; and more generally, the progress made by successive ANC-led governments since the end of Apartheid in 1994 (read the full text of his speech here). He failed, however, to announce any major new projects for the next few years; publicly, at least, he is not assuming that he will be re-elected president at the May 7 election. Nor did he address any of the personal allegations against him, such as his role in the Nkandla scandal – this didn’t prevent a few jeers in the audience as he promised, with a straight face, to intensify the “fight against corruption”.

Here are a few statistics from the highlights reel. Since 1994, 3 million houses have been built. 5,000 farms have been transferred to black ownership, benefitting 200,000 people, and nearly 80,000 land claims have been settled, benefitting 1.4 million people. South Africa now gets 13 million tourists a year, as compared to just three million in 1993. The matric pass rate is up to 78%. 15 million South Africans have jobs, the highest figure in the country history. 300 new health facilities were built in the past five years, including 160 new clinics and 10 new hospitals. Close to 1500 kilometres of new roads have been constructed.

It’s an impressive roll call – no wonder he was in such a good mood. Yet Zuma’s speech did also touch on some controversial topics.

The mining sector got a special mention, in honour of its place as the main driver of the South African economy. It’s a troubled time in the industry, as costs rise and labour disputes get ugly. Zuma departed from his prepared script to warn off both labour and the mining bosses. He said that 2014 was the deadline for living conditions for mine workers to improve, but that the workers themselves must stay within the law. “In no way can we have conflict that destroys the economy… it should not be easy for anyone to say let us strike, or let us reduce the work force.”

He also addressed concerns that the South African Police Service has been heavy-handed in dealing with public protests:

“Any loss of life at the hands of the police in the course of dealing with the protests cannot be overlooked or condoned… Police must act within the ambit of the law at all times. Having said this, we should also as a society be concerned that between 2005 and 2013, close to 800 police officers were killed. The police are protectors and are the buffer between a democratic society based on the rule of law, and anarchy. As we hold the police to account, we should be careful not to end up delegitimising them and glorify anarchy in our society.”

In a deft bit of spin-doctoring, Zuma argued that the service delivery protests occurring daily across the country were not actually a result of his government’s failure, but rather its successes. “The dominant narrative in the case of the protests in South Africa has been to attribute them to alleged failures of government. However the protests are not simply the result of “failures” of government but also of the success in delivering basic services. When 95% of households have access to water, the 5% who still need to be provided for, feel they cannot wait a moment longer. Success is also the breeding ground of rising expectations.”

On the subject of fracking, Zuma was unequivocal: fracking is a good thing for South Africa, and will go ahead:

“The development of petroleum, especially shale gas will be a game-changer for the Karoo region and the South African economy. Having evaluated the risks and opportunities, the final regulations will be released soon and will be followed by the processing and granting of licenses.”

Overall, Zuma’s message to the assembled dignitaries and the watching public was simple: under his watch, South Africa is in a better place than ever before. The sub-text in an election year was simple: vote for me again, and the good times will keep rolling.

Opposition parties, expressing their reactions after the speech, weren’t convinced. “South Africa is a much better place than it was under apartheid, but the progress has not been made under Zuma,” concluded DA leader Helen Zille. She also added that on corruption, Zuma should “put his money where his mouth is. He has no credibility on corruption.”

The DA’s parliamentary leader Lindiwe Mazibuko echoed this sentiment. “It was pretty dismal speech. It didn’t focus on the state of our nation today. The president tried to ride on the coattails of his predecessors. We all acknowledge that SA today is a better place to live in than it ever was. But is it a better place in 2014 that it was in 2009 when Zuma took office?”

For the UDM’s Bantu Holomisa, and the IFP’s Mangosutho Buthelezi, the president’s rhetoric on jobs was particularly problematic. Zuma had claimed in his speech that his administration had created 3.7 million “work opportunities”, and would create 6 million more of these “opportunities” by 2019. However, most of these work opportunities come through the Expanded Public Works Programme, which employs people on a short-term, temporary basis only. “Our people obtain an income and skills from the public works programme, which they use to seek formal employment,” justified Zuma.

Holomisa disagreed, vehemently. “He has no plan to create jobs. It’s an old story, we’ve heard that noise before. He has painted a rosy picture inside here contrary to what we are seeing outside.”

Buthelezi added: “It is actually a big delusion to tell us about the expanded public works programme which creates temporary jobs, because you need sustained jobs.” DM